I lost a drummer friend (Mark Hurst) to a brain tumor last year. Before he passed, he asked me to handle the sale of his drums for his wife. He had a Gretsch RB 22, 13, 16 in Yellow Satin Flame, and a 70's Ludwig double bass kit in White Cortex.

He was a true gigging drummer, having started the Cleveland group the Burning River Band. He used that double bass kit in gigs all over the country, including the big Harley Rally in Sturgis, South Dakota. So, when I picked up the drums, I was a little bummed, because they were in rough shape. These were the only drums Mark played over his 40+ year career, and he was not a gear geek like some of us.

The Gretsch kit was missing parts and the finish was really dirty. The Ludwigs were a little better, but really needed a good cleanup and stripped parts replaced. I had neither the skills nor the time to actually fix them up, so I tried to sell them here - along with Reverb and Craigslist. After selling off a lot of his vintage hardware, I took the drums to Stebals Drums and sold them to the shop. Mark's wife was very happy with the money I was able to get her.

Stebals cleaned and repaired the Gretsch kit, and I think they sold it. Then...they got a call from the Rock Hall - they needed instruments for their new "The Garage" interactive exhibit. Visitors can sit down and play whatever they want. They have guitars, basses, keyboards, and a refurbished vintage Ludwig kit. Mark is surely smiling up in Heaven. 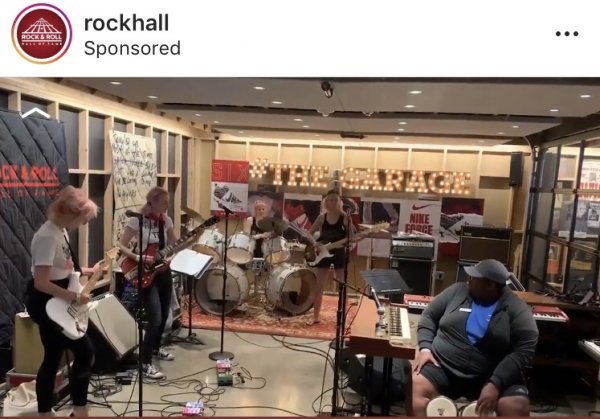 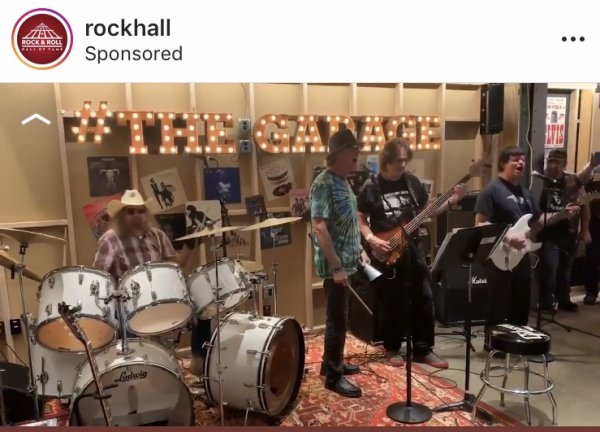 No way, I literally just sat down at this kit and messed around for a couple minutes last weekend. Great drums!
B

It is missing a ping pong table, and a bong, and a couple of cool chicks with cut off shorts and white tank tops on......

Yeah, they need to roll a couple dusty bicycles and a lawnmower in there for the proper "Garage" effect.

WOW... How cool is this!!! What a great ending of one story and beginning of another.

I just showed the pics to his wife - she was delighted.

Great story! And wonderful concept by the R&R museum.......
D

Everybody should have a friend like you Steve! You are a good man, obviously your friend got full use of his skins, could probably have written a book if he played cross-country and stopped off in Sturgis and the fact his drums were “well worn” tells a story in itself. God bless you, keep your sentimental ways and no doubt your friend is smiling from above and you will meet up with him in the next world.

I was there, in that room, last month (journey with family from Ottawa, Canada). After a quick chat, one of the Museum people was on the kit showing me the double kick and the slave bass drum, to me, sounded a little (significantly) off. As you can see in the pic, it has a hand cut port. Museum Guy was going to swap that head out. Hope that it happened.
S

I'm frpm Cleveland and a Rock Hall member and I was fortunate enough to play that kit on the day the exhibit opened. I wanted to take it home! And wondered how they put a awesome vintage Ludwig kit for anyone to play. And now I kmow. RIP Mark

red_snapper50 said:
I was there, in that room, last month (journey with family from Ottawa, Canada). After a quick chat, one of the Museum people was on the kit showing me the double kick and the slave bass drum, to me, sounded a little (significantly) off. As you can see in the pic, it has a hand cut port. Museum Guy was going to swap that head out. Hope that it happened.
Click to expand...