retrosonic said:
Tama: Are your two Red tom toms the actual drums in the black and white pic?
Click to expand...

I wish they were. But the duco toms in that photo are RK's owned by the Cuicci family since 1940. And they have been recently restored back to their full glory, and then some. See link above. My RK toms were found by a teenage drummer in upper New England during a 1970 vacation trip. He brought them back to become the rack toms on his 2 piece 1967 Ludwig kit (kick drum + acrolite). I'm making a project to incorporate them into a 1930's/40's Slingerland kit.
Last edited: Sep 7, 2019

Ended up purchasing the WMP 14x6.5 Slingerland snare from the previous page....been thinking about it for a month or so. Now I have the snare to make my 30's/40's Slingy kit a player. The snare is much more interesting than I first thought. I knew initially it was 1935-1939. Now narrowed down to probably 1936...and right in between the Broadcasters and the first Radio King snares. It doesn't have the etched logo's on the hoops. It's basically a Broadcaster 1 ply build without the hoops or a first run RK with the threaded lugs (no inserts) and no engraved hoops. Came with the later RK style extended snare wires that work fine, original calf skin reso head. Throw off works, though need to buy the upper arm with female fitting knob and the threaded operator of the Todd internal muffler assembly to complete. The last photo is of a complete muffler assembly I "borrowed" from a vintage site. 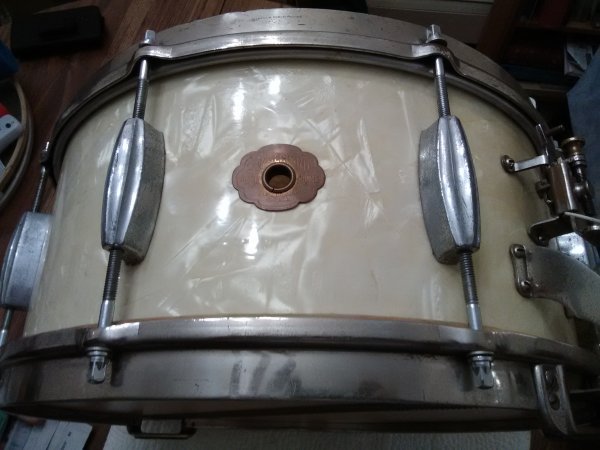 Thanks Bijan. Only half of my muffler assembly is still there - and not the center arm with red/green muffler. The hoops are not engraved so no way to be sure which it was RK or BC. Then again, anyone can swap hoops along the way and "turn it into" either model....hmm. The seller did have an "original" calf skin drum head stamped "Radio King." And it's the only 14" drum they owned that was Slingerland. So that would support an RK. During the 1936 transition from BC to RK, the only difference between them probably would have been the hoop engravings....and possibly the drum head stamp.
Last edited: Sep 16, 2019

Tama CW said:
Thanks Bijan. Only half of my muffler assembly is still there - and not the center arm with red/green muffler. The hoops are not engraved so no way to be sure which it was RK or BC. Then again, anyone can swap hoops along the way and "turn it into" either model....hmm. The seller did have an "original" calf skin drum head stamped "Radio King." And it's the only 14" drum they owned that was Slingerland. So that would support an RK. During the 1936 transition from BC to RK, the only difference between them probably would have been the hoop engravings....and possibly the drum head stamp.
Click to expand...

As Bijan says... that muffler would likely make the drum a Broadcaster. It was introduced on the Artist when Slingerland got rid of the tone flange. The mount hole spacing is wider than on the common Radio King mufflers. That muffler was used on the Broadcasters but never saw one on a Radio King.

It didn't hit me until tonight that none of the wood Broadcasters I've run across so far had the crude "eyelet" butt plate. Most seem to have the more "modern: standard crimped style plates also seen on the RK's. The extension brackets are each drilled for one hole to account for the butt plate fit up. I found this on Mark Cooper's Slingerland Broadcaster page, something I missed the first 2 times I read through it.

Early Broadcaster snare drums utilized a rather primitive method for attaching the snares to the “butt” side of the drum. A single “eyelet” held the snare cord in place. This was soon replaced with a more standard butt side assembly.

So that pretty much identifies at as 1935 Broadcaster. The Broadcasters hoops at times could be only faintly engraved. Over time I could see it being worn away. I find no signs of any lettering on my hoops. Would have been nice.

Some good photos on this Reverb listing of a Broadcaster Steve Maxwell had a couple years back. I also note that my tension rods are not like his....with very stubby heads. So I'd guess at least half to all my tension rods are replacements. And the 16 wires on my extended snares don't fit the 12 mentioned in the Cooper article. Though I have seen other Broadcaster photos/brochures showing them with 16. It looks like the Maxwell drum below has 16 wires too.

Yeah, I meant to mention the butt side. The hoops back then were actually engraved, not stamped like most, so you’d be able to spot it.

One 1" portion of the top hoop does show what could be "imagined" as rogue engraving marks. They look a bit too neat and consistent to be just impact chatter from another serrated edged - metal object. But that pattern on marks doesn't match BC or RK lettering. Other spots on the hoops don't have this.

Top line of marks (1") has a common base to it though with inconsistent marks that are into the metal...hence black. The line below that shows the series of 14 dashes under the heaviest portion of the top line of marks. Probably just a coincidence. 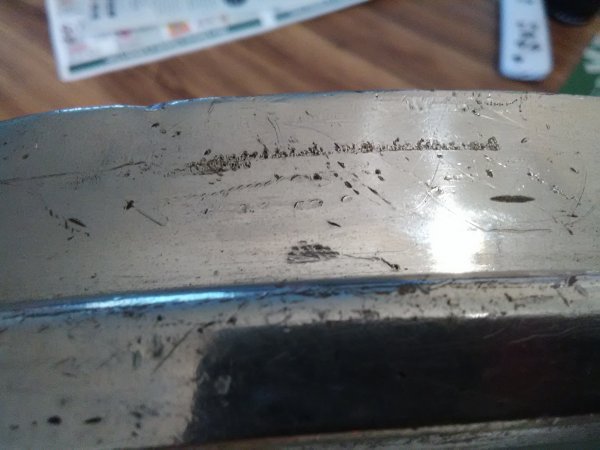 Definitely not the engraving. Maybe they did some with no name after they were told they couldn’t use Broadcaster? Or the hoop was changed. Or they threw one on that wasn’t engraved. Who knows?

One thing’s for sure- that’s a cool drum! I’ve got a WMP radio king with an engraved top hoop that is your drum’s slightly younger brother.

Bijan, I assume your RK is an early one with the threaded lugs. What other early features does your drum have? Is it a Cloud 1 or Cloud 2 badge. I'm trying to figure out how many, if any, early RK's came with Cloud 1 badges ("C" in Chicago is positioned further to the right than on Cloud 2 badges....there's also a more noticeable fat "dot" at the end of the ornate swirls). I've been looking but have yet to find one. And I've yet to find a drum kit BC with anything but a Cloud style 1 badge.

I discussed the options with Brooks Tegler as to what happened. Most likely is that the hoop(s) were replaced along the way. Then a smaller probability that it left the factory without engraved hoops.

Brooks' thoughts were that the time to shift from BC to RK was likely almost instantaneous. Could have been the same day....or a week(s) later. The "Radio" name was already being used on a Slingerland drum. HH Slingerland may have had the Radio King notion in his head even while the Broadcaster's were in production. Some Broadcaster hoops were also stamped as Radio Kings....double stamped. And that double stamping was found as late as 2-3 yrs after that swap was made (figure that one out). So that reduces the odds that Slingerland wasn't stamping hoops at all during the transition period.

If I were a Slingerland exec at that time, I'd have not let a flagship drum like BC leave the factory unstamped....lending credance to the "same day" theory. But mistakes could have been made....and during this transition period could have been a prime period for errors. My drum being an earlier Broadcaster doesn't quite fit the transition theory. Maybe it was one of the very first Broadcasters being built (eye let butt plate), where the likelihood for errors could have been higher as the production line was still working things out? Bottom line, doesn't have the standard hoop...regardless of why.

**Update Dec 2020: with more research I've found that EVERY Slingerland Broadcaster snare drum/badge I have examined through photos (12 or more) has the early Type 1 Slingerland Badge (used from 1928-1936). I've yet to find a single Radio King (even the early ones with threaded lugs) to have this badge. Those have all shown the type 2 badge utilized from 1936-approx 1941/42. Pretty good evidence that the badge change occurred almost exactly with the shift from BC to RK.
Last edited: Dec 16, 2020

I bought this drum to play with my RK toms and 30's kick drum. Didn't know it was a Broadcaster at that time.....wasn't even sure it qualified for Radio King status without stamped hoops. Now that I've read more on the BC's what kind of risks to the lugs am I taking by playing it? Can the drum be played safely? 80 yrs of pot metal under tension might only go so far. Last thing I want to risk is stripping out a lug or lugs from hard tensioning and playing. And to make this drum sound good, it seems to need pretty high tension. What are the best options? Get a replacement set of the later style lugs? What do other forum members do? Leave the tension off and put them on the shelf? Un-tension the drum every time after playing? Note that the newer repro lugs are smaller in foot print and will leave another outline on your finish if used. I don't consider that a viable alternate on a drum with original finish......on resto's/rewraps only. Other inputs appreciated.

Found this discussion from 10 yrs ago on the topic of restoring and/or playing a tapped lug BC/RK. I guess not nearly as risky with the single streamlined lugs.

Grab some repro lugs. Nickel plated ones are available. You may have a little splay but I wouldn’t worry about that.

Today at 3:06 AM
beto_drummer
B
B
Help transcribing a song (Band-Maid - CLANG!)