Is this the oldest New LUDWIG AND LUDWIG drum ????

Around 1909 one (or both) of the Ludwig brothers may have taken an unbranded prototype (patent dated 1908) to Chicago's oldest and largest music store; Lyon and Healy.

Would Lyon and Healy be interested in marketing (retailing/rebranding) their new snare drum?

This drum was an innovation ...BRASS.

NOTE: Brass shell suppliers of the time could only work hoops up to 4". The only way to have a taller brass drum was by making it in two pieces, as is this.

The attached photographs are of that drum. Management at Lyon and Healy were obviously impressed enough to purchase at least one. This drum is NOS.
Lyon and Healy was primarily a harp/stringed instrument manufacturer. They also sold products by other manufacturers. This was either archived at Lyon and Healy and kept NOS ...until somebody in management sold them to Young's Music House in Ft. Wayne Indiana... Or it was sold to Young, early on and kept in that store owner's personal collection for another 40 years (or not.) I was told it sold to another music store and to yet another (7 years ago) by the store owner from whom I acquired it.

I haven't opened it, yet... It came from a music store and was never retailed ...so does it still qualify as new?

The attached pictures were made by the final retail music store. Decide for yourself! I hope you enjoy!
Last edited: Jul 1, 2022
C 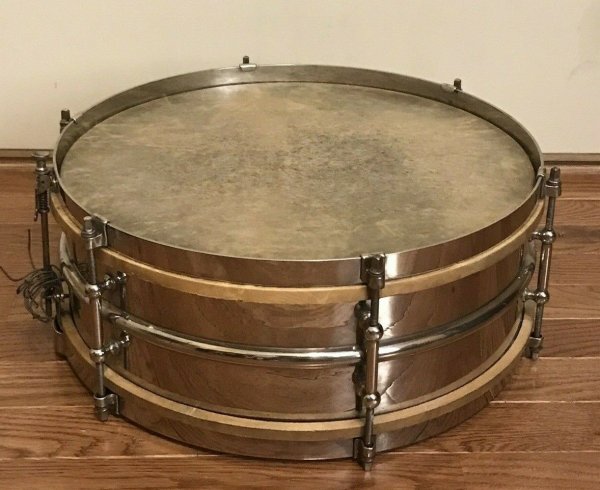 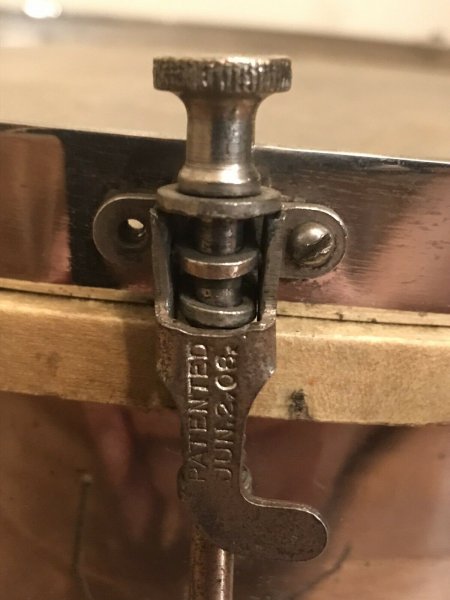 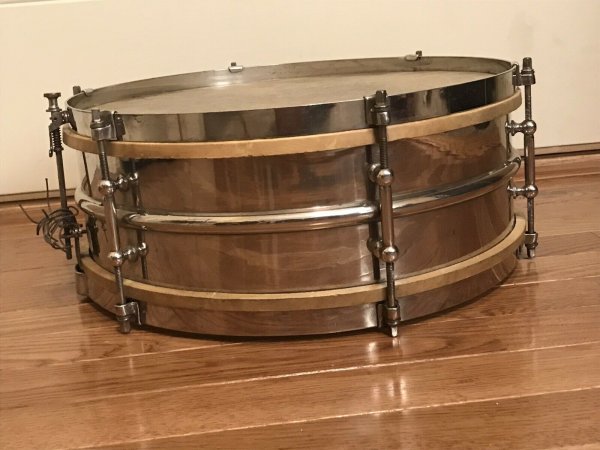 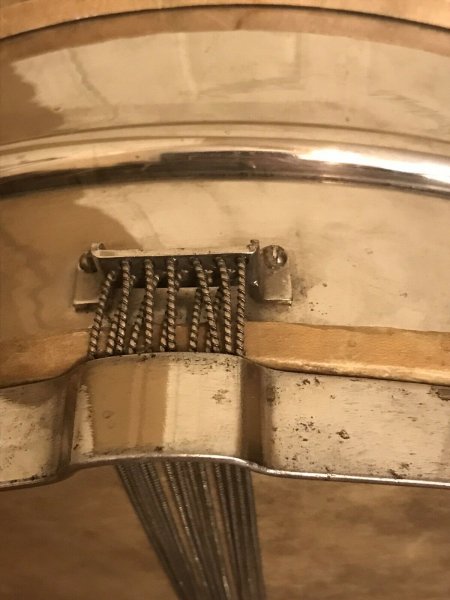 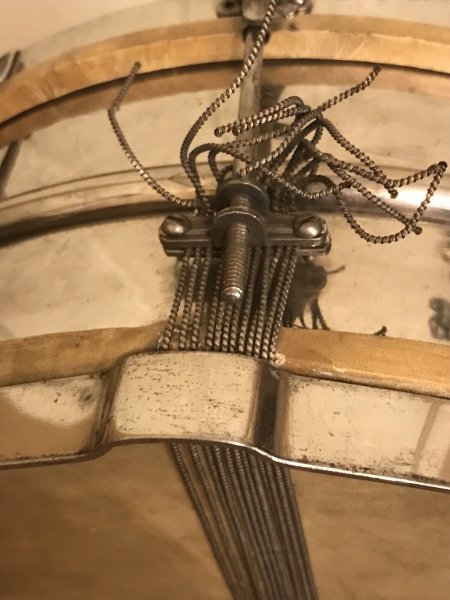 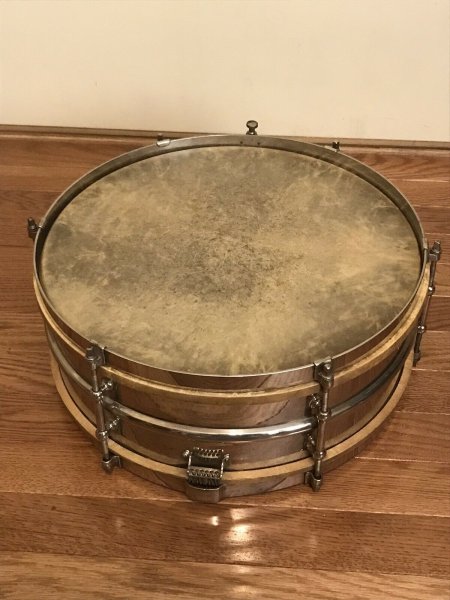 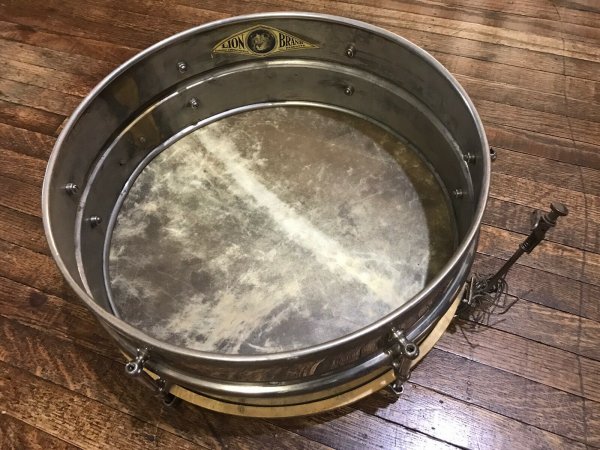 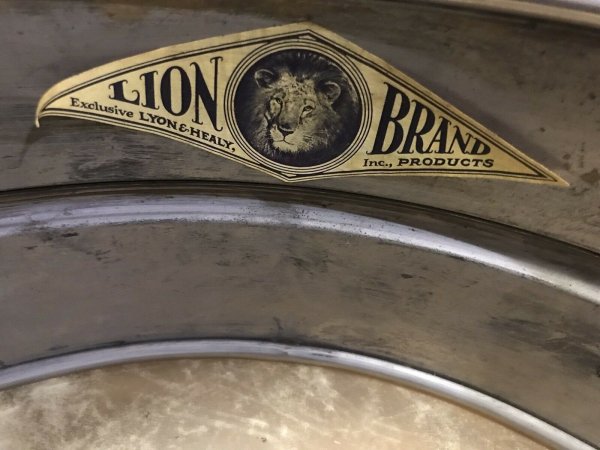 you got three threads going on one drum brother! : D

Anybody here got one of these? ...later version Ludwig and Ludwig 6 lug two piece brass shell snares?

Saw this on the forum:

I got me a big ol' pre-war brass Ludwig snare, today. 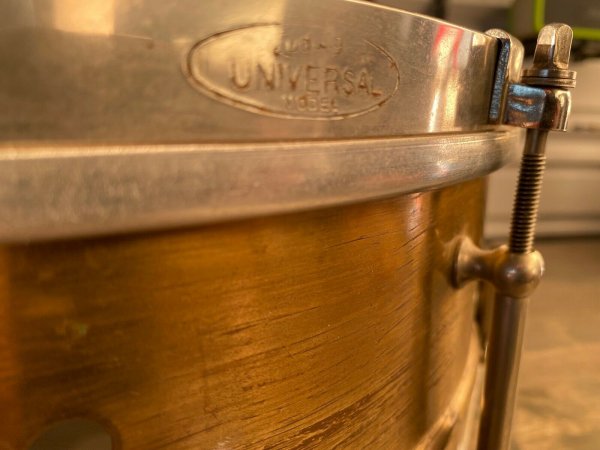 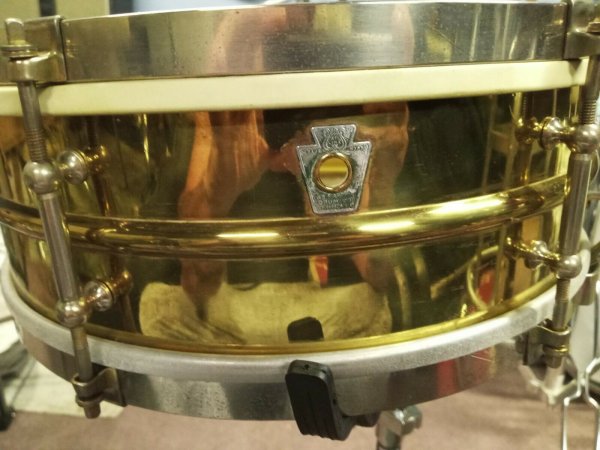 Washburn guitars were another Lyon and Healy product
C

afwdrums said:
wait, you know this about the drum and you were actually thinking of drilling/modifying it?!?!
Click to expand...

William F. Ludwig started WFL Drums in 1937. This early 1937 drum was made using the same supplier of brass shells. All of the brass shells used by Ludwig and Ludwig, WFL, Leedy, Leedy & Ludwig, and Ludwig appear to have been made by one company in Indiana.

W.F. Ludwig was quite fond of this design. It was offered for decades.

This drum (above right, is original but without the black paint) is aqn early prototype to later one-piece aluminum shells.
The Lyre badge and it's strainer are unique to 1937... Then and today, an aluminum badge was the sample tooling for short runs... On this drum the throw-off is different from later ones ...and WFL butt states patent pending.

I think he was drumming up interest...

Not sure sure about this. There are Ludwig&Ludwig brass shelled drums with no bead, and I’ve had tube lug, heavy brass drums that had tube lugs that sat flat on the shell, no cup washers needed. I’m not sure that that Lyon snare pre-dates both of those drums.
Last edited: Oct 29, 2021
C

Bijan said:
Not sure sure about this. There are Ludwig&Ludwig brass shelled drums with no bead, and I’ve had tube lug, heavy brass drums that had tube lugs that sat flat on the shell, no tube lugs needed. I’m not sure that that Lyon snare pre-dates both of those drums.
Click to expand...

I understand your skepticism, I've edited/refined the evidence. Please post yours!

Basically, you have to look at Patent dates. My drum has an earlier (1908) Patent Date. This is listed as a Ludwig owned patent There are no earlier Ludwig snare drum patents...

1.The two piece brass shells are made by a specialized outside company. The middle seam is there because, early on, the fabricator didn't have tooling that could handle any wider material...
It was easier to roll one edge and join two pieces. Per a Ludwig manager: The brass shell was not made by Ludwig and Ludwig. BRASS Shells are contracted from outside contractors, even today.

3. Absolutely no Badging or any engraving of the shell/manufacturers name is characteristic of a very, very early production. The Mills type drums have elaborate Ludwig badging. Likely they are much later in this timeline. "" I have edited this to acknowledge that products made for another manufacturer to sell would also not have Ludwig branding, either. The Ludwig's would obviously have a working relationship with one of Chicago's leading retailer of music equipment retailers.""
Last edited: May 29, 2022

Yeah, not buying this story for a second.

Commodore said:
Well, I'm old enough to have known the Ludwig brothers.
1. They would build the best product they could, and then find designs to lower the price point if necessary.
2. The Ludwigs were quite fond of this design. It was in their catalog from the get-go, and unchanged for decades. It was archived at L&H for a reason ...it was important.
3. When William F. Ludwig started WFL Drums, this was the first design shell he brought to market.
Click to expand...

Dude you’re killing me hahahaha. Don’t get butthurt that people don’t believe your fantasy stories. Do you just want attention?

This from someone who joined the forum last month. I was here the day it started in 2005. (Shrugs)
C

Here is the ad for what you cite as being the earlier model ... It has a separately applied Ludwig and Ludwig badge. The Ludwig brothers would not spend the time and money to design an expensive badge and not include it on a "top line model" ...like mine. Most of you know that the largest Mercedes "star" emblems are used on the cheaper models. The elaborate badge pictured in the ad below would have likely come years after a drum with no name badge was produced.

The strainer patent is Ludwig owned ...and was patented by their brother-in-law. Robert C. Danly. Danly was in the metal forming business. The two piece drum was the first developed, likely before the less desirable, and shallower 4" one piece "smooth" drum.

The 1912 catalog features the smooth side "Mills" design with a strainer marked "Patent Pending."

The smooth drum is PATENT PENDING IN 1912 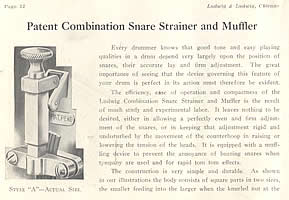 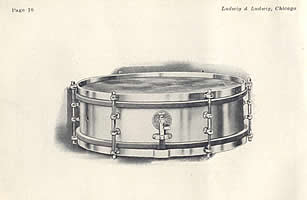 A Smooth side design is limited in depth (4") because of the materials of the time ...Sorry for this being so insistent.
Last edited: May 29, 2022

I don't understand what this thread is about.

Keep going man just keep it to one thread ; )
now what city are we in again?
somewhere around Joplin, Missouri?
C

@Bun Carlos You know people at Ludwig ...Why not get Ryan Taylor's opinion?
(Taylor is the current design engineer with Ludwig)

Per my conversation with Ryan Taylor: The first style Ludwig snare is two part because Ludwig (and everyone else) bought their Brass shells from the same Indiana supplier.
Taylor says there is a middle seam ...because it is easier to put a crimp on the edge and then join the edges. ...Otherwise, snares would be limited to around 4 inches deep. (like the Mills design)