I'll lead off by saying I've long been inspired by Meg White's drumming in the White Stripes, and I think it's pretty easy to establish the time when rock music moved from featuring just a small handful of female drummers to a much larger set of lady drummers -- and that time was the early 2000s when the White Stripes became huge stars, first in the alternative world and then to playing huge arenas.

Secondly, Daru Jones' success is a challenge to every drummer (or drum teacher) who ever told someone their technique was bad, their set up is wrong or they're doing it wrong. Daru is succeeding at the highest level by being unlike anyone else.

With that said, here's a newly released article on Daru Jones from Detroit Metro Times with a photo showing part of his unconventional drum kit and a video of him playing before an enormous crowd at a U.K. festival.


When Jack White plays in Flint this weekend — the rock star's first time ever performing there — he'll be part of a tight four-piece band whose drummer uses a unique setup, with the snare and the toms tilted forward, away from him.

The drummer is Daru Jones, a fellow Michigan native with a background in hip-hop. Jones has been working with White since the beginning of his solo career a decade ago — making him one of White's most consistent collaborators outside of Meg White, his ex-wife who he played with for more than 10 years in his band the White Stripes, best known for her primal, unschooled drumming style.

Jones, who lives in Brooklyn, New York, says he didn't start out with plans to play rock — or any secular music, for that matter. Growing up Pentacostal in the Church of God in Christ, Jones says he was discouraged from listening to popular music.

"My mom and dad are both musicians," he says by phone during a tour break in Nashville, where White moved to from Detroit in 2005. "My dad was my mom's organ teacher. So that's how that all started."

His parents encouraged Jones to start playing drums at age 4. "We really were not supposed to listen to anything outside of gospel," he says. "But when I would go to school, my friends would be talking about hip-hop and other genres. So I snuck [records], because I wanted to be cool."

He started listening to rap acts like N.W.A., A Tribe Called Quest, Wu-Tang Clan, and Gang Starr, as well as some jazz. "I just tuned out the lyrics, because of my religious upbringing," he says. "I just gravitated toward the music."

Jones's love of hip-hop bloomed, and by 2006, he scored a gig drumming in Detroit group Slum Village's live band. When Detroit rapper Black Milk opened for Slum Village at a show at Ann Arbor's Blind Pig, he was so impressed by Slum Village's backing band that he recruited the players for his own.

In 2011, White invited Black Milk to cut a record at his home studio in Nashville and to perform at his record label and music venue Third Man Records the next day. There, Jones's unique drumming style caught White's eye.

Jones says he started tilting his drums forward in the early 2000s just to have a look — "You know, like Prince wearing stilettos, or Michael Jackson with the glitter gloves," he says — as well as a tribute to jazz drummers like Buddy Rich and Gene Krupa, who also played on slanted snares.

He says playing the drums that way is a challenge. "Because I've been doing it for so long, I've gotten used to it," he says. "It made me play differently. It made me be a lot more intentional when I do a fill — it has to count, because everything is not always accessible to reach because of the angles."

He adds, "I like to challenge myself and evolve."

After the show at Third Man, White's team invited Jones to come back for a recording session with the Wu-Tang Clan's RZA. When the rapper canceled at the last minute, White said he had some solo songs that he was working on and offered to record those with Jones instead.

Months later, Jones got an email from White's team inquiring about his availability for the next year. At the time, Jones was juggling work drumming for Black Milk and rapper Talib Kweli. When Jones mentioned that, White then emailed him personally to tell him that one of the songs they recorded together made it onto his first solo record, Blunderbuss, and he wanted to bring Jones on tour, which would feature two sprawling, alternating backing bands: one all male and the other all female.

"Because I'm loyal, it was a really tough career decision to make," Jones says. "I actually almost didn't even do it." When Kweli decided to tour with a DJ instead, it made the decision easier.
"I just felt the universe was telling me that I need to move forward," Jones says, adding. "It's been nothing but blessings, and a shift for my career."

After spending much of his career as a staunch rock 'n' roll revivalist enamored by the blues and country music, White has become a vocal fan of hip-hop in recent years. "Hip-hop is the new punk rock," he told the Los Angeles Times in 2018. "Rappers have the dangerous edge of music now — what I would consider the closest thing to that stuff you might not want your parents to know you're listening to."

Jones says it wasn't difficult for him to transition into playing rock 'n' roll. "Jack brought me to bring my vibe to what he's doing, which made me relax," he says.

On tour, White performs songs from his entire catalog, including his solo albums, the White Stripes, and his other bands the Raconteurs and the Dead Weather, among others. Jones says when they perform White Stripes songs, he's made a conscious decision to imitate Meg's style in order to resonate more with fans.

"She was not the most technical drummer, as you know, but what they did was a vibe," he says, adding. "I like it. I'm a fan."

When he's not drumming with White, Jones also works with producer Pete Rock's live band, the Soul Brothers, as well as TH1RT3EN, a rap-rock trio fronted by Pharoahe Monch. He's also released an instrumental album with Kev Brown called A Daru State of Mind and Play the Breaks, a collection of sample-ready drum breaks and audio commentary from Jones about his creative process.

White's "Supply Chain Issues Tour" band is a lean, mean version pared down from his previous touring bands, and also includes fellow Cass Tech alum Dominic Davis on bass and Quincy McCrary, originally of L.A., on keyboards. White famously doesn't use a setlist, which keeps Jones on his toes — literally, as he often has to stand up to hit his tilted drums.

"It makes every night interesting," he says. "Sometimes we're playing things that we never rehearsed."

He adds, "I like being thrown into the fire." 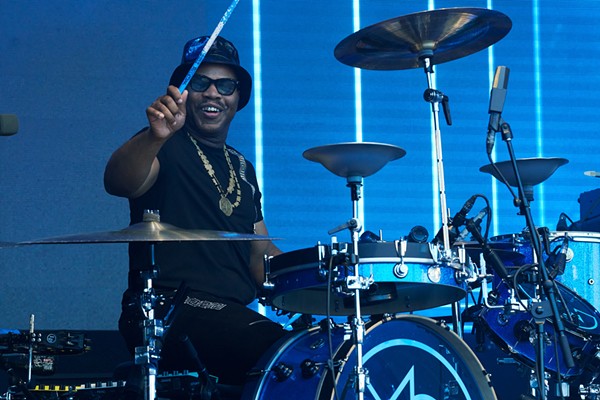 Really enjoyed his playing in this concert!

Really enjoyed his playing in this concert!
Click to expand...

I’m going to have to watch that later …
I’ve not listened to much of his music at all …..

Daru Jones seems to have a great attitude.

Houndog said:
I’m going to have to watch that later …
I’ve not listened to much of his music at all …..
Click to expand...

Nor had I, but it was pretty cool.

Skyrm said:
Nor had I, but it was pretty cool.
Click to expand...

These last 3 years I’ve discovered so much new “ old “ music and artists that I previously blew off …..
I’m always on the hunt …
B

Really enjoyed his playing in this concert!
Click to expand...

After watching some of that, it seems like Jack White is slowly turning into the new Brian Setzer.