I've been wanting to add a vintage Premier set to my "collection" for a couple of decades. Just never found the right set at the right price, although I wasn't aggressively hunting for one, just figured that someday the right deal would come along. My criteria was that it should have the classic double ended lugs, die cast hoops, fit standard drum heads, and have a more modern hardware design for mounts. That pretty much meant drums from the late 60's into the 70's, maybe scraping into the early 80s. I also was more interested in a "fixer-upper" than some pristine example. Oh, I'd surely except a pristine set if offered at the right price but I figured that was even less likely. There was a BDP set at the last Chicago show that fit the bill and the price seemed reasonable (although it was more than twice what I paid for these) but I fought the temptation (I don't mind BDP but it doesn't quite "grab" me either, any other wrap and they'd have probably come home with me) and in retrospect it worked out.

I had taken this week off work and so met a friend of mine for lunch on Monday. He's a guitar player and the conversation turned to a bunch of excess gear he'd been trying to sell on facebook marketplace. He was bemoaning the fact that the local Music Go Round had closed a few years ago and there was no place he could easily sell or trade his stuff. I told him that there was still a Music Go Round relatively close (well 3 hours away) up by Milwaukee. I had driven up there on 2-3 occasions after particular items and said I might be willing to head up there again as an interesting destination for a day trip. We both pulled up the website on our phones and while scrolling through the available drum sets I happened upon a reasonably priced Premier set that seemed to check all the boxes. He noticed a couple of guitar related things that might be worth trading for. So we planned a trip for today. He came to my house (he lives an hour further west in Iowa) and we loaded up his trading fodder and made the jaunt. I had called the night before to verify they still had the set. When we arrived I knew right away that the drums would be coming home with me. My buddy tried his darndest to find something to trade for but nothing quite worked out and he brought home a check for almost $400. In hindsight I should have held off buying the set until he was done and then he could have traded for the drums and I could have paid him the cash and avoided the sales tax (maybe....not sure how it works in Wisconsin) but my clerk was in a hurry to close the deal and it was another hour later before my friend gave up on finding something to trade for. Anyway, we grabbed lunch at a local hamburger joint and then headed for home.

The set is 12/13/16/22 in standard depths. Solid black wrap. Unfortunately the wrap on the floor tom and bass drum has bubbled up. The common ailment of shiny black drums left out in the sun on a summer day. I knew this going in and the price partially reflected that. So....probably going to be another rewrap project. I suppose I could just redo the floor tom and the bass in black but I'm thinking maybe one of those cool wraps from China might fill the bill for something different. Drums have mahogany interiors and (I think) Beech re-rings. I'm expecting they will sound great and the heads all look new. The only hardware included was the floor tom legs and the tom post (fortunately since it's one of the ones with the football shaped profile). I anticipate an easy project and a cool set when done. Everything is there except for the muffler knobs on the small toms. And I need a Premier slotted key. Someone installed a Ludwig Standard bracket in front of the tom mount on the bass. No biggie if doing a rewrap.

Anyway, what better way to spend a sta-cation day than going after some drums? 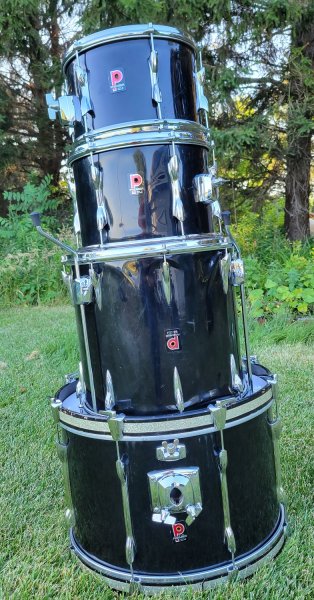 Welcome to the club! Lovely kit.

If they have mahogany interiors , they are almost most certainly mahogany 3-plies . These have the hugest bottom end of all Premiers .

In my opinion , you're a lucky guy for sure !

For me the only color for those drums is Gloss Black …..


I had a Signia kit in Gloss Black …
S

But if the exterior ply is also mahogany, that could be brutal when it comes time to peel it for the re-wrap.
S

I’ve had great success using a heat gun to fix a bubbles wrap. Maybe try that before a rewrap?

Loves me some Premier. This kit was a pawnshop rescue for $165 but was missing the reso hoops, bass t-rods, claws, etc. It was originally polychromatic red but the wrap was trashed and the bass was out of round due to the unsupported weight of the toms. Stripping the wrap was easy and none of the mahogany came off with it. I sanded the bare shells and applied several coats of wipe-on polyurethane. Located the missing parts fairly easily. Since these pics were taken I’ve acquired a matching 18” FT. Yours is really complete which makes for an easy (and less expensive) restore.

Welcome to the club!

Currently I have a Project One and a 2000 snare. 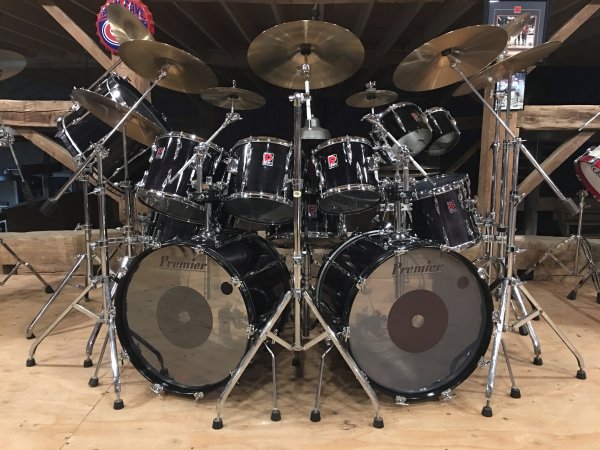 weren't under-rated; the issues; metric or whatever heads and the horrific tom holders pre-71; were the knock-down compared to Ludwig Sling Rogers of the time.... So KO got the good tom holder and cleared the headaches
my2c
W

Sonor and Premier mahogany shells are my fave for sure. Prems hardware is the best though. They discovered the 3 ply magic long ago, but dont forget the Olys, different lugs, same shells!
I agree that black, like Gretsch are the classiest look for your drums!

For me the only color for those drums is Gloss Black …..
Click to expand...

Upon further reflection I'm definitely rethinking the rewrap idea. Nothing sets off that luscious British chrome plating better than gloss black. The bass drum wrap is probably salvageable. Some scuffs that should Novus out and one bubble that isn't too bad. The hoops could use a new paint job as well. The mounted toms are both fine, maybe needing a polish. The floor tom has the worst of it so it may require a rewrap but then I'll do it in black of course. I have a red Premier 16x16 from roughly the same era (not sure if it's mahogany though) that I picked up a few months back at a local thrift store for $40. I might rewrap that in black as well for a Buddy Rich/Louie Bellson style dual 16 setup. If I go that route I'll probably definitely want to rewrap both so they match when side by side (optimally I would find a 14x14 from the right era but I'm not holding my breath). I have all the required Premier stands (although from a couple different eras) so now I just need a snare drum that matches to time frame.

But if the exterior ply is also mahogany, that could be brutal when it comes time to peel it for the re-wrap
Click to expand...

Pretty much every drum I've ever stripped and rewrapped, from older Slingerlands to 50s/60s/70/s Ludwigs have had a mahogany outer ply so I'm used to dealing with it.

So KO got the good tom holder and cleared the headaches
Click to expand...

One of the major things I was on the lookout for in a Premier set and one of the reasons this one appealed to me. This set had the better holder and, best of all, the holder was there (tricky to find these and nothing else will work in it's place due to it's odd shape). In High school one of my buddies had an old Premier set with the early style holder, and while it looked very cool, it failed to impress me. No wonder a lot of those British guys (like Ringo) substituted English Rogers Swivo mounts on their Premier sets (and Ludwig and just about any other brand).

Drums with mahogany content always impress me with their bottom end....so a thin shell that's all mahogany....I'm looking forward to that.

This isn't quite the "mint" aquamarine sparkle bop sized Premier kit I'd always hoped I might find....but it'll do quite nicely to scratch my decades long Premier itch.

never see aquamarine in this holder (tom) era; sure was popular in the metric

JDA said:
never see aquamarine in this holder (tom) era; sure was popular in the metric
Click to expand...

Aquamarine didn't make it past 75, it no longer appeared as a catalogued finish. That's the same year the Lokfast tom holder appeared.
Last edited: Thursday at 7:39 PM

mkelley said:
Aquamarine didn't make it past 75, it no longer appeared as a catalogued finish. That's the same year the Lokfast tom holder appeared.
Click to expand...

Yes I was aware, I figured that if such a set surfaced (at an affordable price) I could overlook the various quirks of early Premier ownership.
Last edited: Thursday at 9:12 PM

No I couldn't
dig in:

Altho one benefit of the "beer barrel hoop eared whitworth metric 10 lug floor whatever" era is..

birch shells
which- I think- were "harder"- and I could like that sound;

K.O. said:
One of the major things I was on the lookout for in a Premier set and one of the reasons this one appealed to me. This set had the better holder and, best of all, the holder was there (tricky to find these and nothing else will work in it's place due to it's odd shape). In High school one of my buddies had an old Premier set with the early style holder, and while it looked very cool, it failed to impress me. No wonder a lot of those British guys (like Ringo) substituted English Rogers Swivo mounts on their Premier sets (and Ludwig and just about any other brand).
Click to expand...

Not sure what you and JDA are finding fault with on the earlier tom mount. I'm new to Premier as well, just picked up this early 70s 303 kit with the 8x12 and 8x1 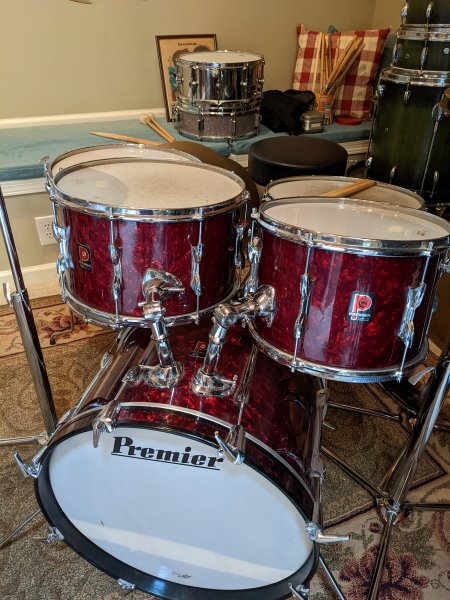