Changing things up a bit on both of my gig kits. I’m going to install the Kelly Shu kits in both of my kick drums and start mic’ing them internally. My kick was mic’d internally at Saturday’s show and I really like the sound it produced. I should have it all set up and ready to go for our next show.

I have them on four of my kicks. Love them.

Just took mine out of the drums I'm prepping to sell.

Any of you folks use a Beta 52 with that mount?

I have the Kelly SHU installed in eight of my kits, all with Beta 52s. I couldn't be happier with my live bass drum sound.

John DeChristopher said:
I have the Kelly SHU installed in eight of my kits, all with Beta 52s. I couldn't be happier with my live bass drum sound.
Click to expand...

What heads and muffling do you usually use?

I love the Kelly SHU, I use Shure Beta 52A mics mounted on Kelly SHUs in multiple bass drums. I use Kelly SHUs to mount Beta 56 mics in some of my floor toms too. (As shown below.) 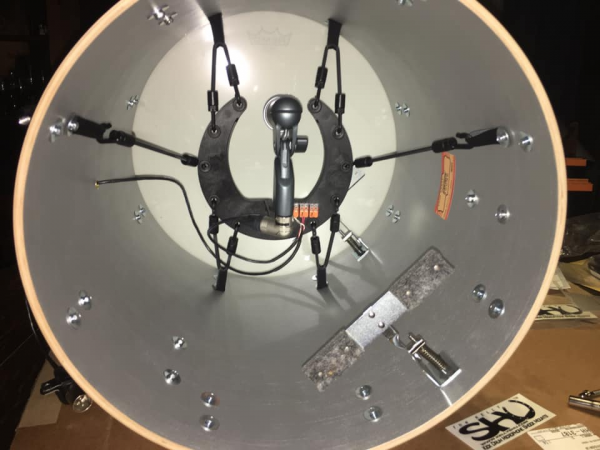 I used to use an original Beta52 and it was a challenge. Note - that's the Beta52, not the current Beta52A. The original B52 had the XLR jack and stand mount too close together, so it was a challenge to use on some stands. The Kelly Shu is one of these problematic stands. It works, but it's an extremely tight fit (and required me to file down part of the cable's XLR connector)

Rich K. said:
What heads and muffling do you usually use?
Click to expand...

Coated P3 on the batter side, Coated Ambassador on the Reso side. Solid front head i.e. no porting.

Evans EQ Pad inside "slightly" touching the batter and reso heads, so there's plenty of "tone" but not too boomy. I use this set-up for all my bass drums. Give it a try. I have both the Kelly Shu PRO and Kelly Shu FLATZ mounts installed in my three bass drums. Running either an Audio-Technica ATM25 or Telefunken M82 microphone with a Sennheiser e 901 boundary microphone. Feeding the custom mic jumper cable through a 2-inch Bass Drum O's Hole Ring. For those asking about the Memriloc setup around the pole. As noted already, some mic have a problem with the mount and mic connection close together. The DX6 worked with a mic clip while a couple of others with dual connectors on the mic itself did not. 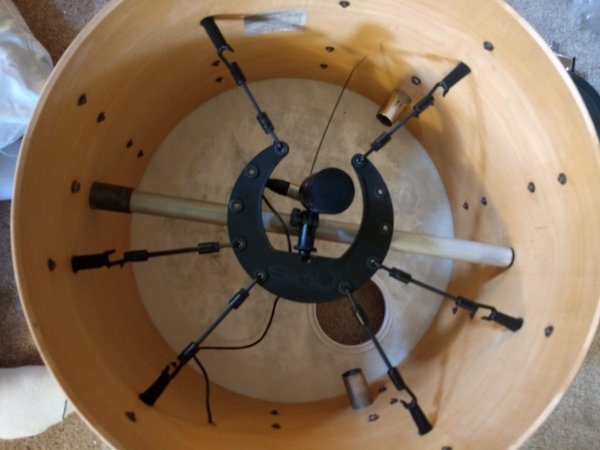 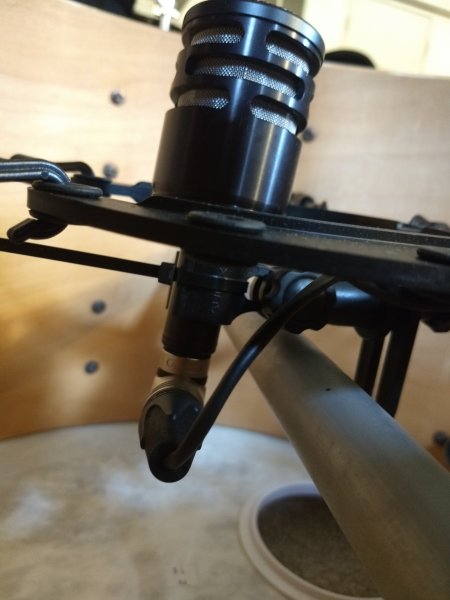 Yeah, love Kelly Shu’s! And that’s the problem with having multiple kits. I like small ports (usually 4”) and it’s just a hassle swapping out bass mics using the KS’s live. I do have one in my studio kit. Kit doesn’t get moved.

I made a homebrew version but the concept is the same. I have them in three of my kits while the fourth kit has a solid bracket mount. Beta 52 in two of them and a cheapy (but surprisingly decent) Digital Reference BD mic in the other two. I also installed an XLR jack panel mount on two of my main gigging kits for extra ease of use.

Heads vary, but typically an Aquarian SKI or SKII on the batter and an Aquarian reso. At most a felt strip on the reso side. If I need to, I'll roll up a towel between the pedal posts and batter head.
T

I use one with a Beta 52a. Have no idea if it's positioned optimally, but it works!

I have 3 bass drums with Kelly Shus and Audix D6s mounted inside. They work well, and sound very good.

And it’s incredible that Shure overlooked the issue with the XLR connector being too close to the mic stand receptacle on the initial run of Beta 52s. The “52A” was released not long after the non-A version.

I have one in one of my kicks and it works really well. I drilled a hole at the bottom of the solid reso head (black) the same size as the xlr jack, and just feed 3’ mic cable through that. I then connect a regular length mic cable to run to the snake.
You must log in or register to reply here.
Share:
Facebook Twitter Reddit Pinterest Tumblr WhatsApp Email Share Link