Tomcatslr8 said:
Hi Folks
Anyone using the low volume cymbals like Gen 16 or Zildjian low volume ones just wondering how effective they are for practice purposes thanks
Click to expand...

I don't own them, but I have tried the Zlidjian low volume cymbals out. They are really impressively quiet, and they feel like you're hitting a real cymbal, not a rubber pad. I can't say if they'd work for you, but I absolutely think they are worth a trip to a shop to try them for yourself.

I play the low volume Zildjians... hate’em. They do their job well. Too well IMHO. I do like the Sabian version but wayyy too expensive. For a practice tool, the Zildjians work. But for a gig, no way. I know you asked for a practice situation, so yeah, the Zildjians work. If you can, I suggest you check them out at a music store. Like I said, I think they do there job too well. The ride cymbal is the best one though.
Last edited: Dec 10, 2018
M

I have a set of Zildjian Low Volume cymbals in 14/16/18 sizes. I use them with a set of Rtom Black Hole for the drum kit. My short answer is YES, they are great for practice purposes. I can now practice or work on ideas late at night without disturbing anyone when I can't sleep. And I've found that the Gen16s are louder than the LVs.

Of course, the long answer is that there's always pros and cons. I used to use a complete set of Ahead rubber mute pads on the kit and cymbals and the feel of the new setup is way more natural. The cymbals swing realistically and you can actually practice your bell hits on the ride.

Of course, don't expect them to sound great. They don't sound like a reduced volume version of real cymbals, but more like a thin, flat sound. But I was prepared to accept that compromise in exchange for being able to practice with more realistic feeling cymbals at night. They are also not cheap - even on eBay, the bids do get pretty high for the Zildjian LVs and it's hard to find a really great deal on them. I personally find the sound not usable for any sort of gig, even though some reviews claim they have used them in low volume coffeehouse gigs.

If you are considering alternatives, I have tried a couple of chinese versions. I find the Arborea ones much louder than the LVs and they sound pretty harsh - didn't like them. I've also tried another brandless chinese version that was apparently made in the same factory as Chang. Again, louder than the LVs, but MUCH more musical and pleasant frequencies. I'd say in a pinch, those would work for a coffeehouse gig. But for the absolute lowest volume in practice cymbals, the LVs are the clear winner.

I've L80's and I love them! They are very quiet, I sometimes play them at night, don't know if the neighbors can hear it but haven't had complaints yet!

The crashes sound dull but they do the job that was intended, rebound is good but not great, you'll get better rebound off regular cymbals.

The hats are another thing; I actually like how they sound with my kit, in my small practice room. In a large room like a music store, they sound dull, in a small room they actually sound ok. Lots of stick definition!

I have the Zildjian L80 hats and ride and I think they're great. The next best thing when practicing on real cymbals is not an option. I think the ride and hat sound is acceptable. Crash not so much but better than any other low volume solution including Soundoff pads which suck.

I've been wondering about low volume cymbals myself. Those who've used them, what about practice with other musicians? Do these things have enough sound that they could be used with other instruments turned down for a very low volume practice session? Or is that a stupid idea? Our band practices at our house which is in town with close neighbors so I've been shutting down rehearsals around 9:30. The neighbors are very VERY cool, but it would be nice to extend rehearsals sometimes without worry. BTW, I absolutely loathe using the rubber pads on cymbals.

if you use Blasticks with a rubber o-ring about 1/2" down from the tips, the LV hihats become a pretty cool instrument in their own right, but quietly

definitely worth micing them up that way and using for overdubs, or practicing while stoned ; )

I have the Zildjian LV cymbals and Remo Silent Stroke heads on my practice kit at home and love them. My playing has definitely improved as I am able to practice in my home at any time, day or night, without bothering anyone.

They could work for band practice in a close setting with instruments turned WAY down or if they go acoustic. You will really need to back down on the rest of your kit as it wouldn't take much to overpower the cymbals.

I found I needed to switch to nylon tip sticks as the edges of the holes of the cymbals quickly wore down the wood tips. It wouldn't take long till I was playing with pointed sticks.

I found them to be perfectly matched to the volume of Remo Silent Stroke mesh heads with regular resos, if that helps any.

Tornado said:
I found them to be perfectly matched to the volume of Remo Silent Stroke mesh heads with regular resos, if that helps any.
Click to expand...

fun2drum said:
I've been wondering about low volume cymbals myself. Those who've used them, what about practice with other musicians? Do these things have enough sound that they could be used with other instruments turned down for a very low volume practice session? Or is that a stupid idea? Our band practices at our house which is in town with close neighbors so I've been shutting down rehearsals around 9:30. The neighbors are very VERY cool, but it would be nice to extend rehearsals sometimes without worry. BTW, I absolutely loathe using the rubber pads on cymbals.
Click to expand...

Yes, I did this once when I was going to sub in a friend's band for a couple gigs. We did a low volume rehearsal at my place to go over arrangements, endings, etc. with the guitar turned down low and the singer just singing with no mic. I had mesh heads and the L80s. Worked like a charm.

Actually the L80's make enough noise to play with unamplified acoustic guitar, but doesnt carry through walls. I wish there was something that made more noise than mesh but nowhere near regular heads. Stuffing the drums with polyfill isnt bad - I have done this on my kids kit. It's not the greatest tonewise, but then neither that or the l80's are low volume gig worthy.

Ive also noticed a huge difference between the l80's i had and the last ones i bought. I dont know if its age, and the new ones will get worse, random variation, or more recently made ones just sound better,but my 20" ride and my new 18" have more zing than the original ones i bought.

I have the L80 14/16/18 set that I use in conjunction with a HH stand, Real Feel pad, and Gibraltar kick pad for pad practicing. I use this setup for quiet work on exercises, beats, grooves, etc and find it ideal for this purpose ... 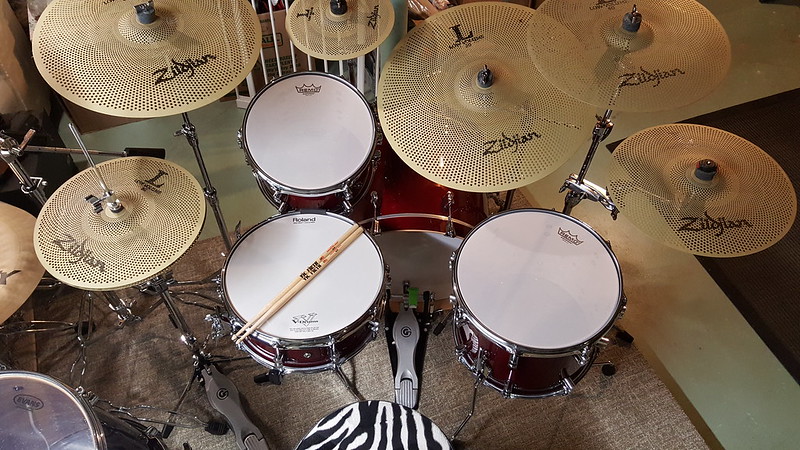 I only wish that my Zildjian L80 Hi-Hat13 inchers made a sound when doing a open/close. When I open them there's pretty much dead silence. If it wasn't for that, I would be happier than 85% happy with the set. But even with that being said I rather use the low volumes instead of mutes.
J

I just wanted to say that I'm now 100% happy with my low volume hi-hat. The reason for the above mentioned silence was because the hi-hat wasn't setup properly with the washer/spongy thingies. An advanced drummer helped me with my kit and now everything sounds great. Didn't want to bad mouth a product because of my ignorance. Sorry about that Zildjian. 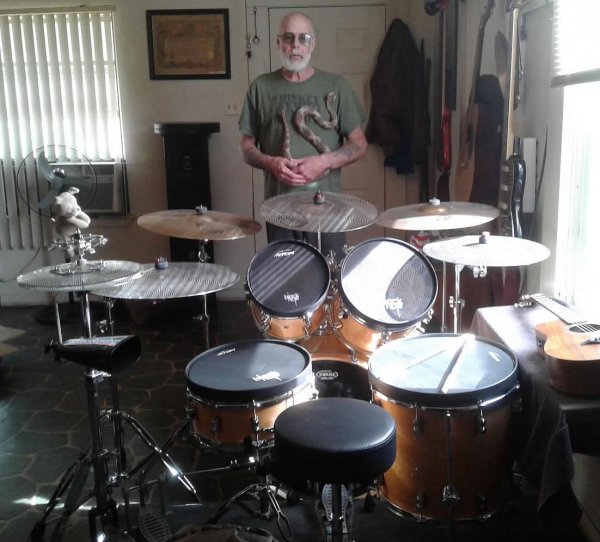 I use Sound Off pads and Zildjian Gen 16's for playing along with CDs at practice.
I wear 15db reduction ear filters and use headphones.
I play 10-12 Beatles or Stones tunes, then switch over to an unmuffled set for solo drumming.
E

I had some L80s until I got a dedicated rehearsal space. I had zero issues with the L80 stuff. The hi hat was amazing because it played like a real hi hat and you could get all the nuances like the real thing. Heel splashes, semi-open/closed tones...all that stuff. If I were still practicing in an apartment, I'd be all over the L80 stuff
You must log in or register to reply here.

8 minutes ago
DrummerAt125
D
W
Vintage Rogers, need a valuation and some advice...