Quick question...did Ludwig ever produce chrome over brass bowtie lugs? I've got an Acro from 1965 with cob hoops. Here is a photo of the inside of one of the lugs. Is there a way tell if it might be brass...or did those even exist? Thanks!

Will a magnet work?

drumtimejohn said:
Will a magnet work?
Click to expand...

Nope. Works on the tension rods, but not the lugs themselves...
R

Ah, the perennial magnet debate - reminds me of Danny Kaye's line from "The Court Jester: -

The pellet with the poison's in the vessel with the pestle; the chalice from the palace has the brew that is true! (or is it the other way around?)

As I recall now it’s not supposed to stick. I believe it has something to do with the parts being die cast. I’m sure someone will come along with the specifics and perhaps a scientific answer.

Die cast parts are made of a zinc alloy. Brass can't be die cast because its melting point is too high to work with the dies. Magnets won't stick to either of them.

K.O. said:
Die cast parts are made of a zinc alloy. Brass can't be die cast because its melting point is too high to work with the dies. Magnets won't stick to either of them.
Click to expand...

That's incorrect but all die cast drum lugs are made of zinc. The discoloration on the inside is just a byproduct of the plating process. The parts are orientated in the plating tanks so they outside will get evenly coated with Copper, then Nickel and finally Chromium. The plating is uneven inside the lug and also never polished so you with thin spots in the Nickel or Chrome so you can see some of the copper.

Thanks everyone! So basically these lugs are chome over...zinc?

unless it's a prototype acrolite, then they are aluminum.

p83 said:
unless it's a prototype acrolite, then they are aluminum.
Click to expand...

So you're saying the bowtie lugs are aluminum?
P

i believe they were on the prototypes. someone will straighten me out if i'm wrong.

The lugs on the "prototype" acros were imperials. These were the actual prototypes. New tooling had to be made for the notched bowtie lugs which is expensive so they just used what they had. The actual first production acros retained the same shell and aluminum rims as the prototypes but had the new bowties. I have a first gen acro and a '66 or '67 acro and took a lug off of each to compare. The are exactly the same down to the makers marks inside. The "prototype" lugs are chrome plated and have had the finish "brushed". I personally don't believe there were any bowties made out of aluminum. If there were any, they were extremely short lived. I believe people have misinterpreted the ad copy to believe that the lugs were aluminum. 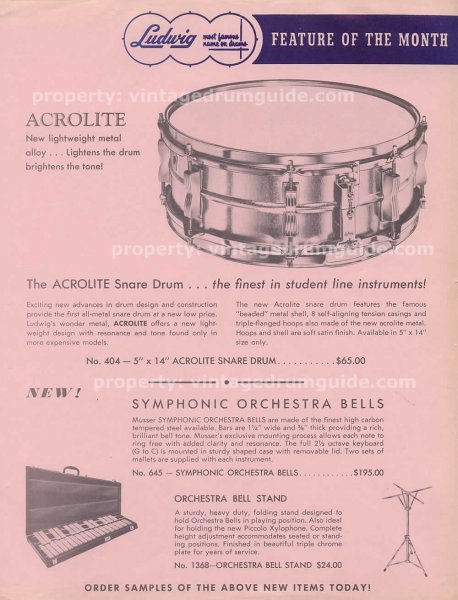 This spells out the timeline very nicely.

There were a small number made of aluminum bowties made for Acrolite snares in the early 1960s but then they quickly went back to the usual zinc construction. Slingerland also tried aluminum lugs as an option in the 1950s, but almost all cast lugs have been made from typical die-casting alloys which are mostly made of zinc. Brass can be cast but usually is not cast in dies. I guess it can happen but is not typically done and I don't know of any drum company that used brass die castings. Rogers did use brass lugs but they were not die cast (and generally did not work so well long term on higher tension drums).

Companies that do brass die casting. It is done quite a bit but has never been done for drum lugs.

https://www.deecometals.com/custom-metal-castings/die-castings
You must log in or register to reply here.

S
In the Market for a new drum throne
2