We are excited to announce the latest release of our 110th Anniversary products. Introducing, the Ludwig Legacy Mahogany Diamond Flash Inlay Charcoal outfit. Version 1 released earlier this year was quite the stunning example of a drum set. It was the most acclaimed release in of our 110th-anniversary product lineup and gone in the blink of an eye. The followup you demanded is finally here!
This anniversary outfit takes inspiration from Ludwig’s most coveted drums of the 1930s. Flash Pearl Inlay made its debut as a high-end finishing option for customers looking to enhance the presentation of their drum set. Ludwig takes it a step further in our 110th versions by using exquisite pieces of exotic veneer to adorn the Flash option presented originally as a Wrap finish.
The Diamond Flash Inlay presentation is made complete with Ludwig’s revered Legacy Mahogany 3-ply shell design. This release is limited to 40 3pc Shell Packs and 60 Snare Drums. Outfit Specs: 14x22 Bass Drum, 16x16 Floor Tom, 9x13 Tom Tom, and 6.5x14 Snare Drum (Sold Separately). All drums fitted with Ludwig’s 110th Anniversary embossed badge.
Legacy Mahogany Diamond Flash Inlay Charcoal 3pc Outfit- LLC54233LXCX2
Legacy Mahogany Diamond Flash Inlay Charcoal SnareDrum- LLS503XXCX2 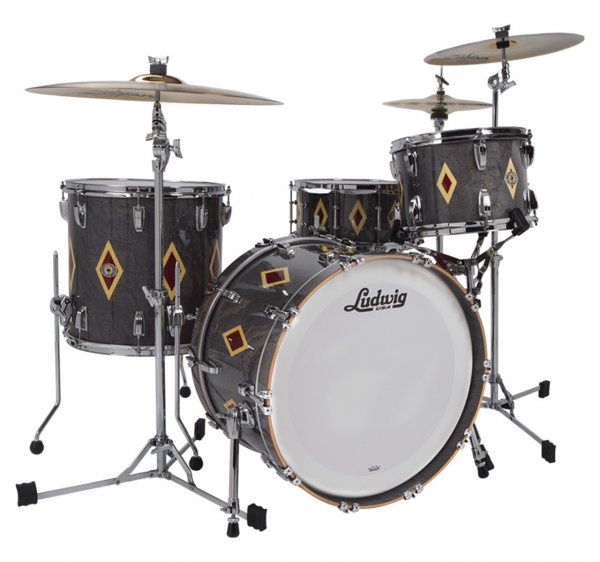 Yeah I think trying to cover a full audience of buyers, but really not too many "kids" would be up for a kit like this so I think they are missing the mark a little with the modern hardware.... really just the spurs and floor tom legs that look odd to me

When I first saw the white kit I thought it was just white lacquer on maple then got up close and saw the actual birdseye "freckles" underneath made me think that the base finish really needs to be seen up close to be appreciated.

Not a huge fan of the diamond design, but I'd say that I like it better on the white birdseye maple kit. I would definitely like to see a different inlay pattern... not sure why they feel a need to backwards rather than forwards in the design aspect???? Also, I was an instant fan of the "Charcoal Shadow" finish when it first came out in the 80's, so I do like the base here on the anniversary kit.
F

I've seen it, but not sure what I think of it yet. It didn't give me an "I've gotta' have it" moment though.

Need close-up of the inlay/diamond they are talking about..the pic is " from a distance..

They're kind of cool in that Gretsch '57 way. Not that they'd have anything at all in common, but I get a similar vibe from the looks.
Last edited: Aug 31, 2019
D

If you have to ask you can't afford it...LOL

dumbdrum said:
If you have to ask you can't afford it...LOL
Click to expand...

How right you are.

Doesn’t Steve have one for sale?

dumbdrum said:
If you have to ask you can't afford it...LOL
Click to expand...

Not necessarily! Regardless of what I can afford, I still want to know the price. It really seems like the majority of the price is in the finish!

I knew it looked like something I'd seen before, but didn't know what the term for it was until your post:

Here is an amazing drum set from the 19
useddrumsets.org

I inquired about getting a set with gull wing spurs instead of those "things" they call legs......
That was a waste of time!

Bun Carlos said:
I inquired about getting a set with gull wing spurs instead of those "things" they call legs......
That was a waste of time!
Click to expand...

That’s just silly.
Why would they not allow the more “correct” spurs to be subbed?
Sometimes I just don’t understand the Marketing mindset.
You must log in or register to reply here.

C
Slingerland Lugs vs. Ludwig - are they the same size?