I just scored a neglected 1965 WMP jazz fest snare. Looks original but is missing wires/muffler. Serial # is 198K. I got a shot of the inside and it has 2 date stamps - red and black. Red looks like Sept. 8, 1965, and black looks like Sep. 9 ??? Never seen two stamps before. The red ink and font looks right but I thought red was phased out by 1965. I had a red stamp from Oct. 60 (transition) and have a Pioneer with a normal black 1965 date stamp. The black font looks all wrong.

I could not find other posts to explain this and haven't seen this before. Any insight would be appreciated. The drum is very dirty and needs a lot of TLC but I thought the double dates made it that much more interesting....thanks! 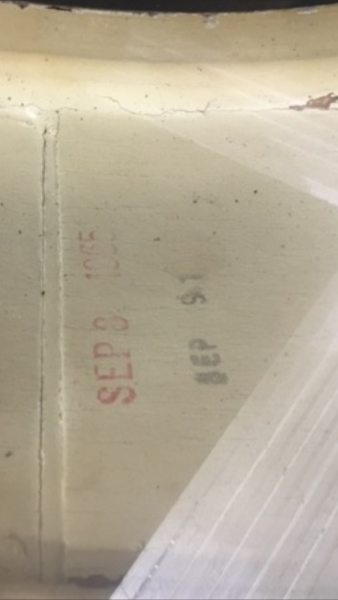 I think the explanation is that it's Ludwig in the mid 60's.

I bought a new Ludwig snare drum a few years ago, it was a Guitar Center limited edition drum, and it has a badge with a serial number, and a sticker on the inside with a totally different serial number.

That will confuse someone in the future.

Must have been the night shift.

It went past that same inspector twice..

or he corrected; picked up the wrong one (yesterdays) first
or he liked yesterdays better

Maybe I've solved the whole "When did Ludwig go from red to black stamps?" dilemna??? Wed. 9/8/65 was the last day of red, and Thurs. 9/9/65 was the first day of black? But why did they double stamp......just those crazy Ludwig factory workers, I guess!

Maybe they got paid per stamp...?

That's cool. I think the change from red to black happened mid 1965 or so. I had a blue sparkle club date with July 1965 date stamps and they were all in red.

Either way, it's a very dirty neglected drum and I can't wait to bring her back to life. 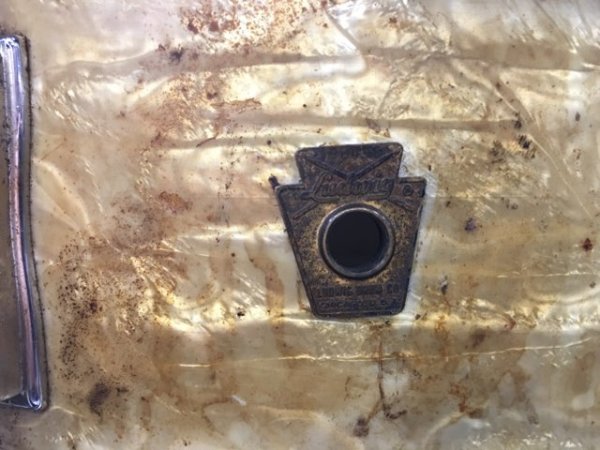 WOW, that is seriously ugly. Please show us some after pics.

JazzDrumGuy said:
Either way, it's a very dirty neglected drum and I can't wait to bring her back to life.

Holy smokes that is dirty. Can you show us the whole drum?

There's only one stamp. You're seeing double. Time to check the eyesight?!
It's really odd how different the font is between the red stamp and the black stamp. The black font looks more common to me based on the drums I've had.
Stretch

That shell should clean up nice, I hope for you.
I have a Clubdate kit that has 2 drums with red and 2 with black same July 7 1965 dates on all.
My Shells look like Mahogany inner and Maple outer plys.
Yours might be the other way around.
Just to add to the confusion.
Wayne

Ok, so I got the drum! I was waiting for a week and called them as the UPS tracking # was invalid. The s/h mgr felt badly and sent it via 2 day. It was yellowed to all heck! The chrome, the outside, and even the inside. Like it's been sitting in a smoky bar having smoke blown on it for 60+ years! It had a Jack deJohnette top head in good shape and possibly the original snare side. 8 rods are original, and 8 are new. The wrap was very dirty as was the inside paint. Lugs are in good shape as are the hoops. Not sure if they are COB or COS, as a magnet sticks, but lightly. The edges are very nice with a 2" section of little separation I didn't even bother fixing. It has a very wide (between 2 lugs) snare bed, but it's very shallow. Wrap is fully intact as is the badge/grommet. But it smelled real bad, not like cigs, but like burnt popcorn, in a bad, imitation scent sort of way. Shell is 5.25" deep.

I stripped the snare. I first started with a towel and some hot water. I then tried a dab of Dawn on baby wipes. I tried rubbing alcohol. I tried those Magic Eraser Mr. Clean sponges. I tried bleach on a Q-tip. I tried hydrogen peroxide. I tried Windex and vinegar. All did a little bit of work. I did not want to damage the wrap or take away the shine, of course. As for the inside, mostly just the baby wipe with hydro peroxide to not damage the paint, and of course not near the date stamps. I did the Dawn bath for the chrome lugs/inserts/rods/, cleaning with a cheap (ie: non-abrasive) sponge and a tooth brush for the lug grooves. All the metal parts had a yellow tinge to them! I aired out the shell, which helped, wrapped the springs in felt. I greased up the mount screws and the rods. Hoops and lugs are shiny. P83 works perfectly! P32 tightening screw slots are a little stripped and need to be carefully tightened. Note the before and after on the re-ring. I debated cleaning the badge with Brasso, but instead just went with hydro P and vinegar to lighten it up and it looks fine (I did that once on a Gretsch RB snare and regretted how it looked so shiny and just wrong!)

But, the bottom line is that I think it turned out great, and it sounds fabulous, just like it should (Remo Skyntone on top w/12 strand wires) ! I wish it had the baseball muffler but oh well. I may have one laying around. I bought it because I am doing a Ludwig micro bop kit and was hoping to match the snare. It's going to be hard with a very aged WMP. One panel still has dark yellowing as well as some black dots on the badge panel at the bottom, but it's not visible. However, even though I don't have Novus or a buffing wheel, it's still pretty vivid and somewhat shiny considering the ashes from which it arose. It sickens me that 1) someone would neglect such a lovely instrument, and 2) GC would sell this item with all its nastiness. Anyway, I am stoked and only wish I could fined matching drum wrap, but for now, I am using removable gold sparkle Cricut vinyl adhesive, which is a close match...... 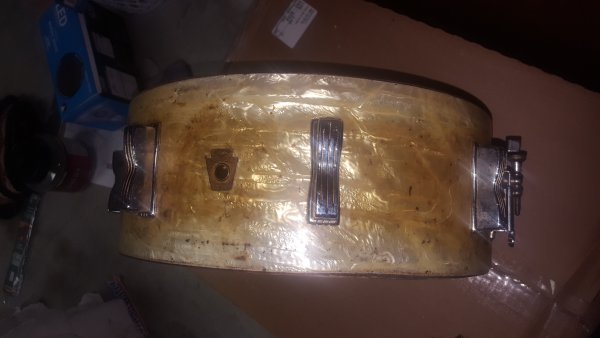 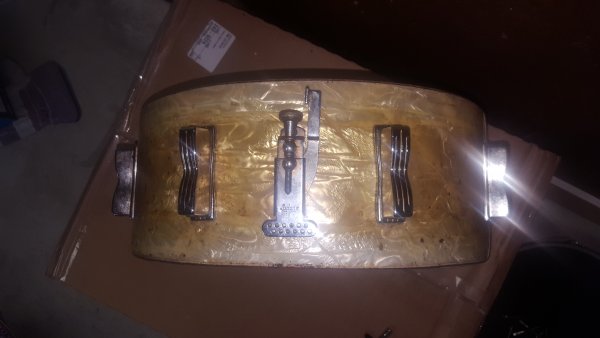 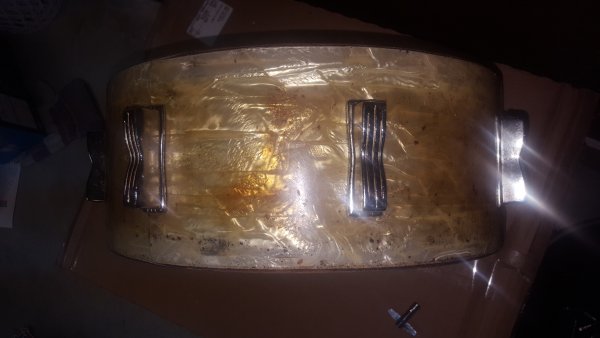 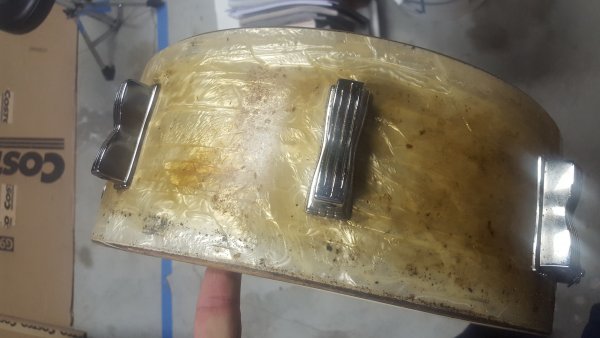 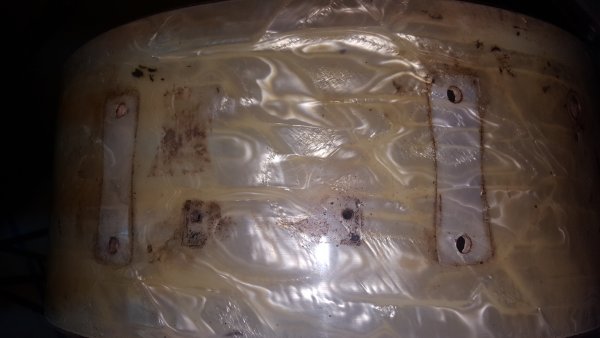 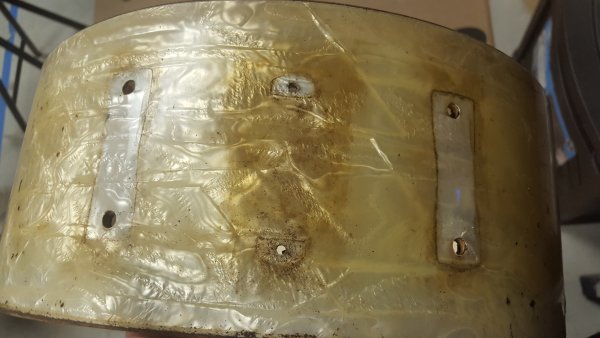 After pics. It looks like there are streaks but with the hardware on, the drum looks evenly aged......the last pic is the "finish" of the set I am doing to "match".....this snare was a fun project! 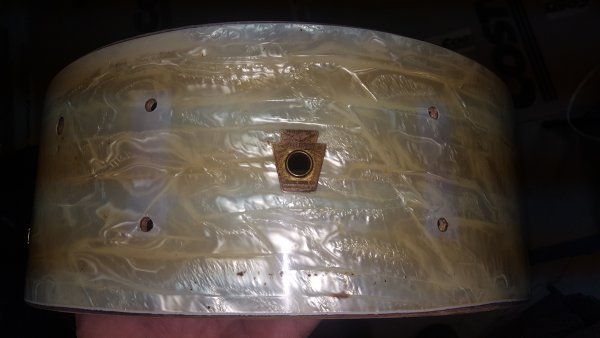 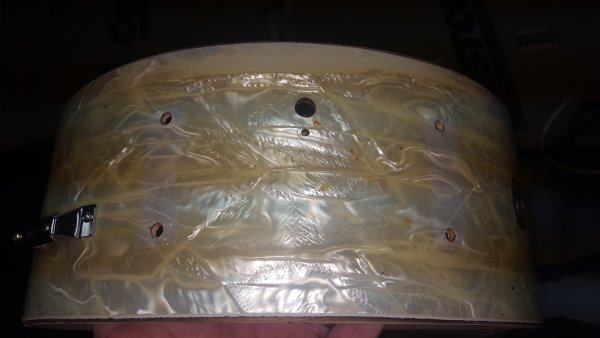 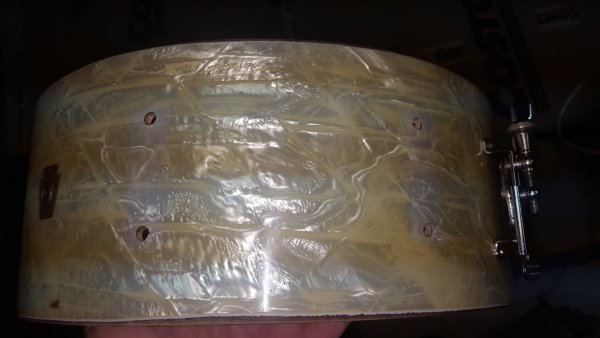 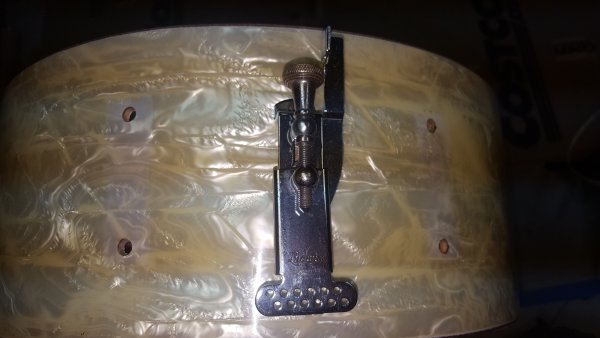 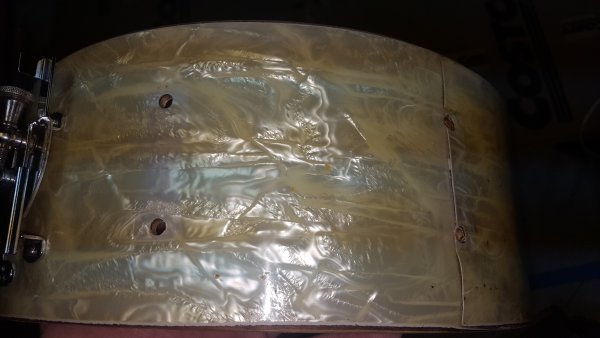 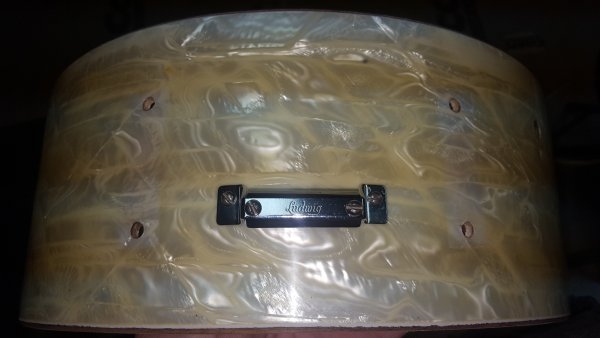 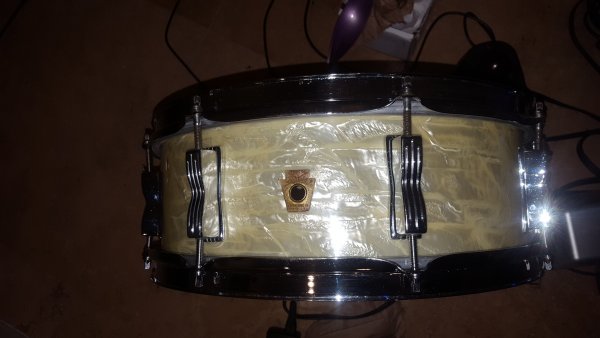 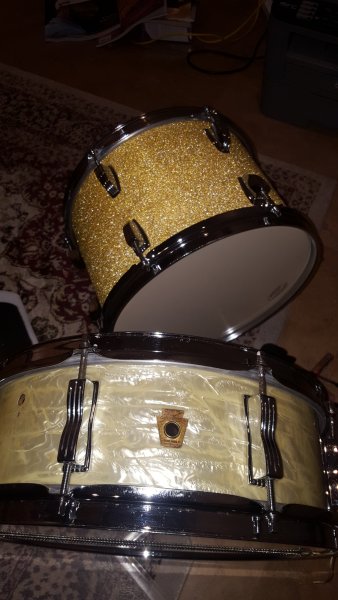