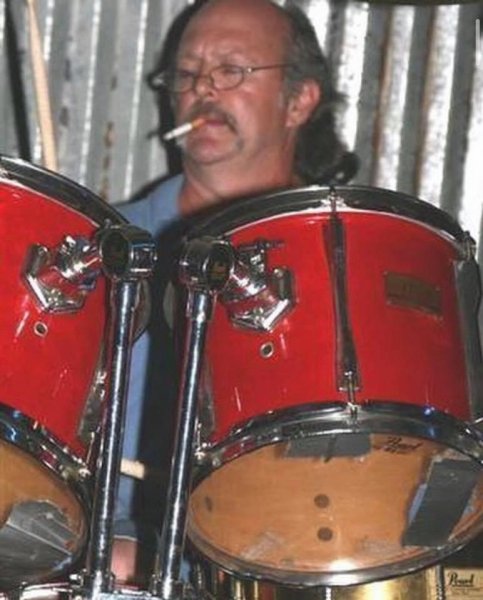 Look at that determination. He wears prowess on his face like puma on the hunt. Hungry for the rhythm and relentless with his strike. He’s like a Competitive eater with an insatiable need to devour silence and spew fills unto an all-you-can-beat buffet de drums.
That’s Chad Bijendozile right there; and man, does he know how to hit the skins... If your name is Tom and you live in the Pudgemont area, be wary... Chad is known to beat on toms like they owe him money, and he is determined to keep them in pocket.
Not long after he was enlisted to play with Poon Raft, Chad found fame as the drummer for Jimmy Ode’s band “Real Ode: An Ode to Reload Era of Metallica”. While they didn’t get much exposure online due to budget restraints, the book he wrote around that time, “Men are from Mars, and Ladies Love Lars”, is considered one of the better fan-fiction Lars Ulrich novels out there, selling both copies within weeks.
These days, he’s spending less time writing tomes and more time perched on thrones. Less time putting symbolism on the page, and more time pushing cymbalism from the stage. He’s been doing some live stream concerts via Skype, showcasing his new band “Gimme Fuel, Gimme Fire, Gimme Chad Bijendozile: a Tribute to Metallica”. You can watch these streams from the comfort of The Chug Suckle, every Wednesday at 2:30pm Pudgemont Standard Time, as they have exclusive access to stream on their stage (since they are not allowed to host live shows).
So get your tickets and head down to the Chug Suck and watch this man keep time and clock his kit. It’s one of the most enthralling displays of rhythm you will see these days.

Copied from Podcast - Rings of Dad

Anyone ever ordered from Drummaker.net

Today at 12:59 AM
newamsterdamjazz
N