MIJs - getting sucked up into collections?

steambent said:
I am glad we got it straight that MIJ drums are just as good or better than American made drums.
Click to expand...

Let me correct your generalization so that the true, actual point is made:

MIJ drums can *perform* just as acceptably as any other drum kit.

Just as when the fanatics of German-made drums imply that they are inherently superior to any American-made drums, we know such statements are subjective and foolish.

Mij drums are different , I wouldn't say better but I have always believed in every assembly line product , you will get a few that are really good.
I just traded my cb700 internationale set that I got from a deceased friends estate sale 10 years ago. Everything he had was nice.
The kit always sounded great and still does, you could pay 1,000 dollars for a drum set and would be hard pressed to tell the difference . For me I buy things that sound good. Doesn't matter what the label says. And before anyone says " how could you sell your dead friends drum kit" I have more of his stuff to remember him by and most importantly the kit went to another friend of his that knew him even better than I did. I was happy with the kit and would only have traded it to my buddy since I always felt he should have it.

I agree that the hardware isn't pro but as was said earlier my Rogers bread and butter lugs all have to be replaced because they were poorly made.
If it sounds good .. Play it. Enjoy it.

Not all MIJs are created equal. A large percentage ARE junk. Cool vintage - and now collectible - junk, but still junk. Many are flimsy, hard to tune and just don't sound very good. I have had several dozen of those sets go through my hands over the years, and most were easy to let go after restoration. But some were good, and a few - very good. I kept only one MIJ set for myself, a Mica-Sonic Deluxe, a Star made stencil from c. 1967 in green satin flame. At the time I also had an RB Gretsch set in the same color, they looked almost alike from ten feet away and the MIJ set actually sounded better! For a while I was torn between the two: these sound better/yeah, but those are Gretsch... But when I needed some quick cash, the Gretsch set was the one to go. 20+ years later, I still have that MIJ set. Does that mean that all MIJs are as good as vintage American drums? Nope.

Aside from finding ,fixing and displaying them
A big part of the fun for me with these vintage MIJ kits is that they are far less documented
in terms of the builders and timelines than are the very well documented American made drums.
I enjoy participating in discussions and other efforts with my fellow enthusiasts
to try and nail down some of that lack of information.
It amazes me to see how many of these cheap little knock offs
have survived the last fifty years and have been given a measure of respect far greater than their builders ever intended or could even have imagined at the time.
Not to mention the sense of nostalgia they conjure up for many of us
I love their vintage look and unique colors and most of them sound pretty good to me as well. 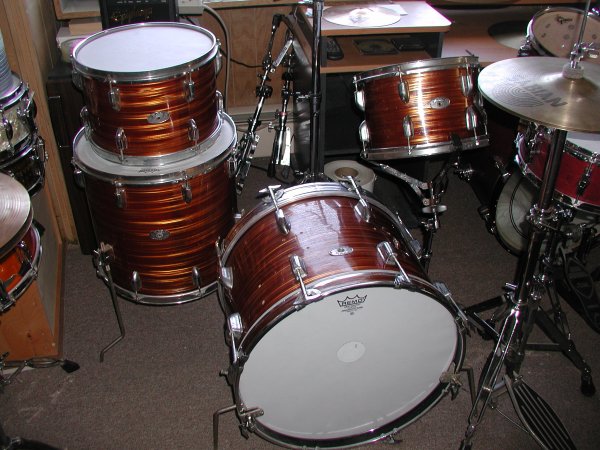 It’s true the wood is firewood and junk, but man if you get the right kit - they can sound amazing. If you bet one with the die cast hoops - different league of MIJ

Kenwood said:
It amazes me to see how many of these cheap little knock offs
have survived the last fifty years and have been given a measure of respect far greater than their builders ever intended or could even have imagined at the time.
Click to expand...

Because the truth is that musical usefulness and validity often gets into very abstract territory, exceeding whatever was intended or expected from a given instrument...or object.

That's why Tom Waits can get music out of a giant seed pod. That's why Jim Keltner can play garbage-can lids on a recording if that's the right sound for the recording. Or why Weckl bypassed all of his high-end snares when he found that the cheap Kent snare just worked best for some reason.

There's FANTASTIC interview with Jay Bellerose in the latest edition of Drumhead. He gets into a lot of discussion about all of this sort of thing and what it means to be playing music as opposed to just playing drums.

Slight spoiler, just because I love this stuff: He would often show up to recording sessions in the early-mid '90s with things like huge, old Radio King bass drums. This was in the era when you were supposed to be showing up with 18x22 DWs. At the time, those old '20s-'30s drums were also considered THE JUNK! I remember it well. He would get funny looks and often actually lost session work because of that. But, he had a musical concept and he had a sixth sense of what was coming, and he stuck to it. And then he met T-Bone Burnett and Joe Henry, both of whom were 150% on board and *got it*...and then it all opened up for him.

Seek out this interview. Enlightened stuff that will get you thinking differently.

Doesn’t seem to be a shortage of Stewart drums for sale in Ontario Canada, on kijiji there are eight sets asking between $250 and $500 CAN (Can $ is .75 US today) (kijiji is like Craigslist)
People under 25 years old may not know the difference between a MIJ And a US vintage kit?
They certainly know 60’s Ludwig kits are valuable.
My local music store says they have seen a lot of used drums & cymbals traded in /sold to them this summer.
Slightly off topic I just bought a set of like new used Paiste 14” sound edge hats for $300 Can, could not pass up such a deal.

just what is the proper phonetic pronunciation of that name "Kijiji"??
I am from the ocean state and we Rhode Islanders say things sort of weird compared to others just in general terms 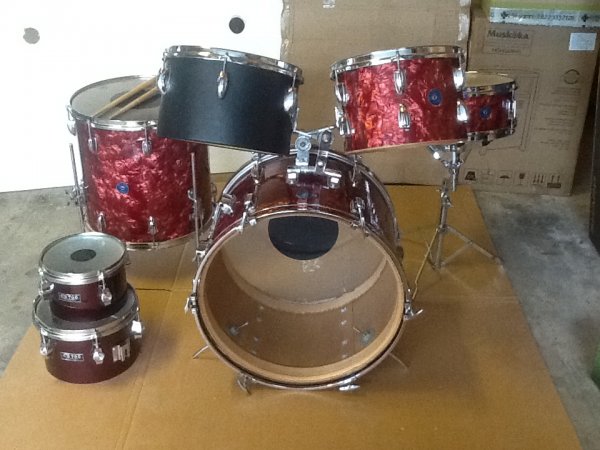 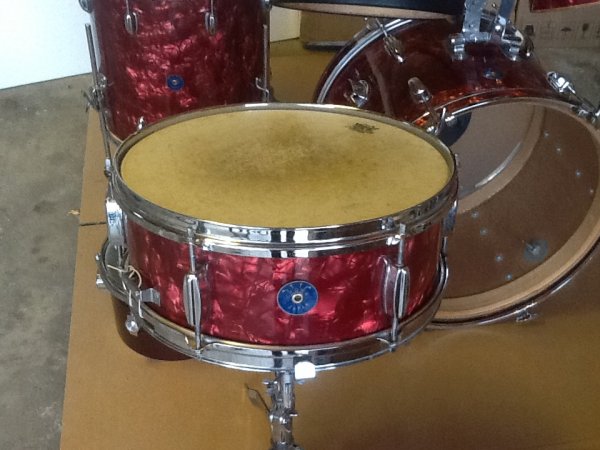 I don't want a whole kit, but I wouldn't mind picking up a Stewart snare. The thing is you gotta find them on Craigslist, not Reverb or Ebay. Those two are generally priced above my bite price.

With a coat of varathane on the inside,right heads and tuning, these guys are like deep fried bananas .

rondrums51 said:
60's MIJ drums were a collector's fad for a while, until everybody realized what junk they were. Cheap wood, poor shell construction, substandard flimsy metal parts and chrome plating. Just embarrassingly cheap copies of American and European drums.

I never understood the fascination with them.

You could play them on a gig and they would sound OK, but compared to real quality drums, they were a joke.
Click to expand...

This. Granted, there were those kits that bridged the period from when Pearl was making Stencil kits to when they established themselves on the pro market that were decently made. But in a buyer's market for used gear and so many great pro level kits out there to be had at a decent price, I couldn't see paying much for even one of the better MIJ kits.

Yea, for my money the first MIJ sets that were really any good were the late 60s Yamahas, with the Red and Yellow tiger wrap . I played one of those at a gig, and they were solid, well made and good sounding drums, albeit a bit "high sounding" for me after playing Gretsch for 40 years. I still prefer Gretsch for quality, but thats just me.
B

JDA said:
In a sense "MIJ" drums have never really gone away.. I see- still "see" them in (new) Yamaha, Tama, Pearl...
the flashy/unique colors, the value bargain for buck (lower lines) and in their imitation-still- of older USA and European makes..

what's the difference.
At least with a fresh MI "J"..you'll probably get better mileage from them ; )
Click to expand...

Lifetime warranty on those Visions. 1 year on Gretsch USA Customs.

Saw this on Craigslist and thought it looked cool.
Made an offer for the heck of it and it was accepted.
Ad didn’t say anything about sticks or a case but they were included.

BennyK said:
With a coat of varathane on the inside,right heads and tuning, these guys are like deep fired bananas .

Danelectro is actually a perfect comparison - the old ones are objectively not good guitars. But they have a sound.

Maybe it's because drums are such a mechanical instrument; we don't have a super-distinctive pickup, that can go through an amazing amplifier, zipped up with that super-special filth pedal.
We have the shell, the head, the sticks, our hands. Nowhere to hide. Of course the urge is to have the best possible shell, head, and sticks. Remove things that could possibly get in the way of our hands.

But sound is what matters. Sound is all that ever matters.

I have a Teisco Tulip guitar. It's utter trash made out of plywood that I paid $75 for and refretted in my bedroom when I was 18, and cut a new pickguard out of a sheet of polystyrene with scissors to replace the badly warped original. It sucks by any sane metric. But, through a small tube amp turned all the way up it sounds EXACTLY like "Nuggets V. 1".

BennyK said:
With a coat of varathane on the inside,right heads and tuning, these guys are like deep fired bananas .

Thanks Retrosonic
I quickly got rid of the oddball extra tom set up, and put on a fresh white coated resonant head on the bass drum and I really could not be happier with them.
Now, I know there are many limitations and shortcomings with these drums
but even while considering all of that.
It is a good thing that not all of us vintage drum enthusiasts can manage to find any of that said enthusiasm for these poor old MIJs 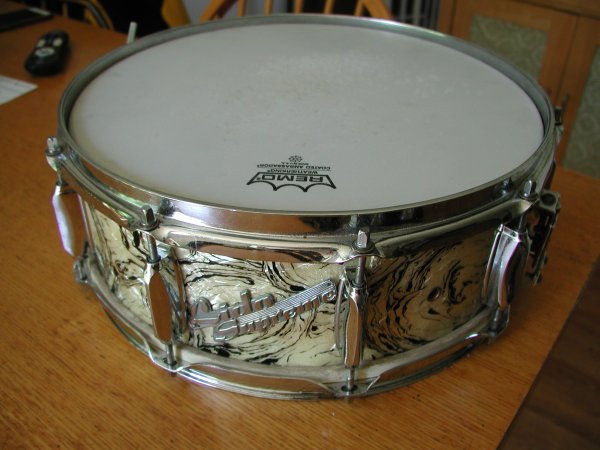 As that just makes for a few more of these funky little kits being available to those of us who can.
Last edited: Aug 12, 2019

Anyway I bought these red Marine Crown drums from Kijiji a few years back One of the most pleasant transactions ever I had these pegged as being Hoshino K built at first but I am thinking they are more likely Sakae
Click to expand...

Yes Kijiji is pronounced like that. Owned by eBay, but charging no fees, in Ontario Canada in the past ten years it replaced newspaper classified advertising as the way to buy and sell gear.
Recently Facebook Marketplace is catching up but there are some people who don’t use fbook.

On topic my friend who has built many kits tells me a Stewart kit he restored recently sounded fantastic.
You must log in or register to reply here.