Some of you know I am the "house drummer" for my 11 year old's kids acoustic guitar group. I was brought in last year at the Blues Fest at literally 2 minutes before showtime and asked to play! I've managed to hold the chair since and I volunteer nearly every Saturday helping teach the kids with the main (real) instructors, so it's my way to give back (and I get to jam with my older guy!). It's a non-profit called Guitars Not Guns and does great things.

So this Saturday, we got to play the Monterey Blues Festival again. Perfect conditions - partly cloudy, 69 degrees and a balmy breeze. We only had a 25 minute first set, though. I used the house kit - a Mapex Saturn in burgundy sparkle - 12 up and 14 & 16 down, with a 22 bass (looks like the same kit as last year). Heads were coated emperors on the toms. Snare was a Ludwig white/black 10 lug steel snare with a loose Fiberskyn head - it had a fat sound but I think sounded like junk (last year they had a matching snare). The kit sounded great, though. Hats were 13" K mastersounds, left side crash was a Sabian AA thin 18", ride was a Sabian AA 20 medium, and right side crash was a Sabian AA 16 medium. All cymbals sounded great - last year, I had huge clanky hats, a 16 A crash that was good, and a ridiculously stiff brilliant ride that was all ping. This year, as I am now in the group, I was able to prepare & bring my stick bag and I grabbed a tambourine at the last second....and I needed it! The house sticks were a pair of black V.F. Steve Gadd wood tips - I settled on a pair of Bill Stewart wood tips - nice and light and feel so nice in the hand. Everything was miked so no issues re: volume.

So we had about 15 kids up on stage and we only did 5 songs - but it went great! I am guessing the crowd was 1,000 or so - we played in between sets on the main stage. Since our stage was by the food area, a lot more people did eventually show up. You gotta love the kids - the audience was very excited, dancing around and giving a great vibe and mojo......

I made some basic screw ups and I was not happy with my playing. Some errors were obvious to the unskilled ear, and some just obvious to me, but I tried my best to quickly fix the issues. One of our staples is Wipeout (yes, I know, that's NOT a blues song!), and for some stupid reason, I was driving home from the gym that morning thinking, "Hmmm, how can I change the ending fill?"....with the concert just 2 hours away!!! I know, what an idiot! So I found some people playing Wipeout on Y.T., and as I heard them, I began doubting how I played the song. This caused some unnecessary self-doubt and unneeded panic & stress. Needless to say, I screwed up some of the classic fill by counting it wrong and it was only a few seconds but still - what an @$$!!!

On the song for which I needed the tambourine, I got stuck playing it with my right hand and doing stick shots, light crashes and snare with my left. But I needed a 3rd hand for the ride! So I had to play left handed ride, across the kit, and then crash and snare, all while my right hand was playing double time tambourine, while keeping a "4 on the floor" type beat (bass/hat/bass/hat)......amateur hour at it's finest!

Our final song was House of the Rising Sun. We have a 10 year old girl that sings and her voice is so low it's not funny and she puts her own vocal embellishments on the song and just kills it. The harmonica solo by one of the teachers (he's in the main teacher's bluegrass band) was soulful and bluesy, then my dude's slide guitar solo, then the best guitarist in the group did a very nice Latin bluesy-feel solo and we just nailed it for a big standing ovation.

However, after hearing the recording, it actually sounds pretty good and clean (no wind!). And the main teacher said I played great and that the band nailed the set.....so I'm still in the band.....phew! I got a lot of hand shakes from the crowd when I went to retrieve my video cam (more for probably volunteering to teach the kids versus my drumming "ability", if that). Just like that, though, it was over, but it was so much fun! I got an "artists" pass, so in my books, I've made it! My kid has played 3 years in a row, I've done two with him, and my 7 y.o. needs to start officially playing. I was trying to motivate the older one to practice in the morning as the gig was that day and the little guy went upstairs, plugged in his Strat and was wailing away making distorted sounds.....I am hoping next year I get to share the stage with both my dudes.......my power trio is in the making! And if my little guy decided to go to bass, that would be cool because the big one also plays a mean piano - hello, jazz trio!

I just picked up some in ear monitors and preamp and I was excited about using them. However, I could not find my extension cable (idiot!) so I had to rely on just my hearing and that was a little difficult considering playing with 15+ guitars. At least I had a bassist, who is a high school kid, and he was okay. Hit the basic notes and he knew to lock into me.

Morals of the story - don't change arrangements right before a show! And have faith and confidence in yourself on stage.....I'm truly blessed to be able to share music with my dudes and help teach other kids, too.........can't wait for the next gig.......rock on, folks! 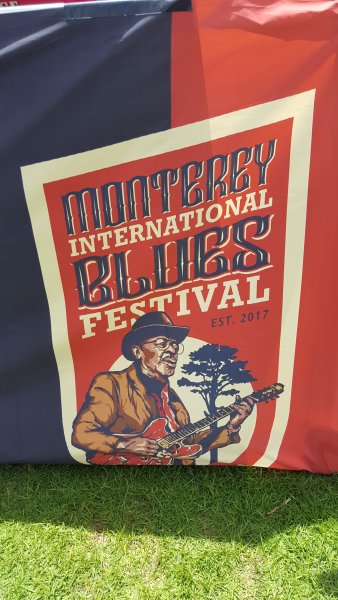 This is my dude on the right looking back..... 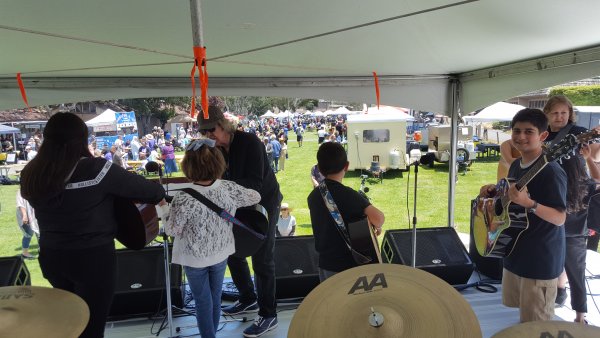 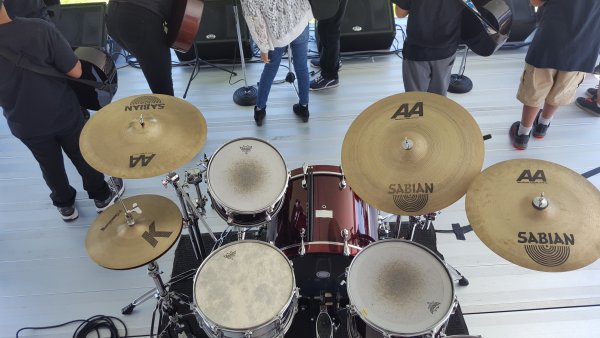 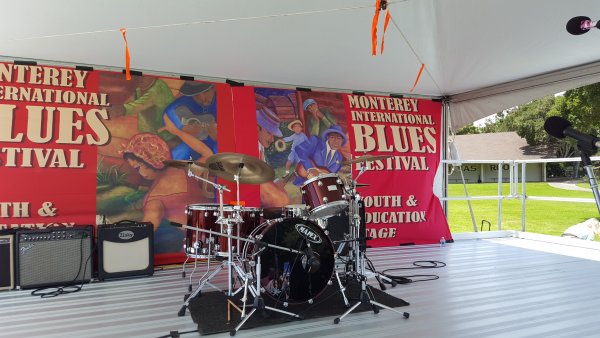 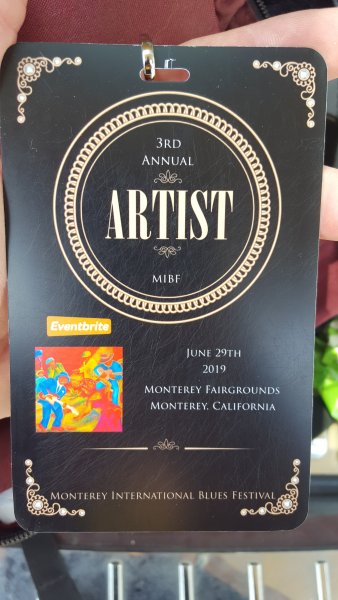 Great story! You're hard on yourself. Remember, the memories for you and your dudes are what will stick with you, not a missed beat or miscounted fill. Great job!

Man what a cool gig! We are our own worst critics. The Saturn kit looks awesome, good on you man!

I sat down last nite and I asked my dude how I played - he said good. I said the snare sounded like junk and he said actually he liked it. I asked him if I messed up anything and he paused, then grinned uncomfortably and said yeah! He knew. I asked him where? He knew exactly the part.

In Wipeout, we play thru it twice at a moderate "normal" speed, and then we double time it 2 more times with a big ending. This is a lot of fun for me, of course, and the band keeps up, too. I try to make the transition seamless. Unfortunately, I crashed the last beat of the last note which is the first beat of the new double time section with my right hand (I'm a rightie) and by the time I landed my right hand to start the classic Wipeout fill in double time, I was a note behind. So for the first 2 fast measures, I am garbled up playing off the beat but counting it right in my head and on the bass drum, and then I cleaned it up for the last 2 measures.

He totally called it! I just could not make the adjustment on the fly and as an
"experienced drummer", it was totally embarrassing, especially since I've got it down and if you can't play Wipeout, just hang it up! I need to either do a very fast crash with the right hand (as the 1st beat of the double time measure) or crash with the left hand while starting the fill with my right (on time!) and then get the left hand over to sync up. Other than that glaring screw up, it was a whole lotta fun!

The bass drum logo is not centered so that just may have thrown you off!
You must log in or register to reply here.