So combining my guitarist's and I's mics together, we've got a pretty comprehensive set up. We're trying to start remote recording for artists, so we want as much control as possible, then if folks want simple they can just take the mics they want, but they have options.

It's been a fun experiment!

scaramanga said:
I swore by it!

Have you checked this out? : I bought one of those clips! I love it.

After months and months of planning on buying a couple of Shure SM-81’s for OH’s I did an about-face and just pulled the plug on a pair of Aston Starlights. I have not yet received them, but I have high hopes of course. I have 14 days to run them through their paces and determine if I should keep them. If not, I will revert back to my original plan on the tried and true SM-81’s.

The Astons interested me because of the different sound modes they have (Modern, Vintage and Hybrid) and I definitely like the idea of the laser pointer. Of course the laser is not going to tell you everything you need to know about positioning, but it will definitely be a good tool to have.

Up until now these are the mics I have been using:

The overheads and a bass drum mic are you need to get started if you don’t have any mics. Those cover the majority of the job. That and a mixer with spare channels for growth.

The cheap Cascades have been very good for me. They are still good and I will keep them for live work. I had a chance to substitute on a Pink Floyd tribute gig earlier this year. That was a pretty big gig for me and the sound company used SM81’s for OH’s on that gig. Once I returned home and turned on my Cascades all of a sudden they sounded lousy to me. Once you get a taste of the good stuff that’s what you want. My ears have since re-adapted and the Cascades still do sound very decent.

My set up is usually used for practice. The mic’s get plugged into a mixer or recorder and I have my phone as MP’3 player playing the songs I am practicing and I mix myself in to play with the band. Great way to practice. Metronone is on the phone as well.

I have also been doing some recording this year as well and learning a lot about the various aspects of that and having a lot of fun creating new original music with my friends. We put a lot of work into the recordings that probably no one will ever hear. It’s a great experience though.

phdamage said:
If you want to treat the ceiling on the cheap and not leaving yourself a headache to fix when you move out - they are light and you could probably get them to stay with just a few screws. a little spackling when you move out and you'd be set. you could even reuse the panels at your new spot
Click to expand...

Being a rental property & worried about getting their deposit back, I'd highly recommend checking the ceiling, maybe putting one screw in, removing and patching. Previous tenants may also have patched the ceiling or the ceiling may be made of something more difficult to patch. Spackle over spackle on a ceiling sometimes doesn't stick too well. If its a popcorn ceiling and old, screws can put large cracks in the popcorn. And you do need screws for rockwool panels. I tried with t-pins and they are too heavy.
acoustic foam are very light and T-pins work great. Best of all, the holes T-pins leave is so small, just a dot of paint with your finger or even Whiteout is usually all you need to cover the hole left.
T

Aha! Another AT3035 user. I swear by my 3035's for (like you) the bass drum. Such a counterintuitive choice, but so effective.

For hanging things on rented drywall, monkey hooks are hard to beat. Only a tiny nail sized hole, and they hold quite a bit of weight. 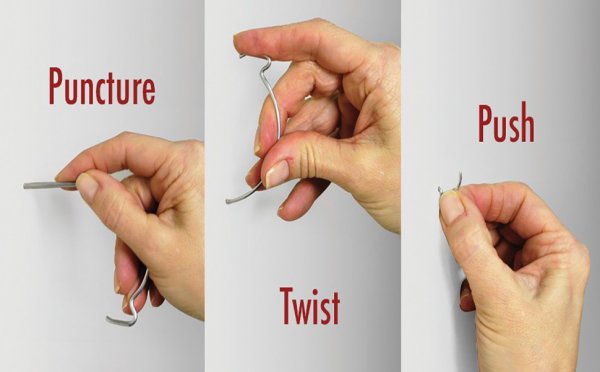 scaramanga said:
I swore by it!

Have you checked this out? :

I have. Though I haven't ordered one yet - opting instead to just continue getting all kinds of tape residue all over those mics.
T

In addition to the aforementioned AT3035 on the bass drum ...

I'll would also sometimes set up a stereo pair of MXL R40 ribbons as rooom mic's. Until I pumped some phantom power through them and reduced their fidelity greatly. These are excellent ribbons for very little money. Just don't hit the phantom power button by mistake!
K

i have a matched pair of Shure KSM141a overhead. 57 on the snare. 2 Sennheiser MD421s for toms. Shure Beta91a in the bass drum and a Moon mic in front of the bass drum head to capture the lows. Pretty straight forward and reliable. I used to use an AKG 451 on the hi hat, but was happier with just the overheads
C

The best advice I can give is the Audix DP7 kit. Audix and Rode will give you more bang for your buck. So will Presonus. Mic placement is EVERYTHING!! Before anything, consider the location of your recording. Mine sit in the middle of my living room. No closer than 10 feet from any wall. My drums are on a rolling platform. Taylor your mic choice to the room. I borrowed and rented an exhaustive collection of mics to give me what I wanted in MY living room. That said, I ended with a collection that most would not consider purchasing as noted by posts here. I come from the film/video world and have used just about everything available. In MY living room are the following; 2 Audix ADx51 condensers for the overheads, Bass drum gets a D6 as do the two floor toms. All rack toms get a Rode M5 as does the top of the hats. A SM57 on the bottom of the hats. On the snare top is a Rode NT-5. A Rode NTR is used as a room mic. All my mics run into a Soundcraft MFXi 16 mixer then straight into a Tascam SD20M recorder. You can't go wrong with the Audix DP7 kit. I have three complete kits. They get used more than anything else in the studio and in live recordings. Don't even think of wasting tons of dough on anything else as a starting point. The DP7 kit is THE Bomb!
D

Mainly recording band rehearsals but have done a few sessions. Using a Soundcraft Ui24R as an interface into an old MacBook Pro running Logic. Did a couple of Facebook Live concerts too. Sent a full mix out with the video. Worked pretty good considering no one there to make adjustments during the show.
Last edited: Aug 6, 2020
S

cruddola said:
All rack toms get a Rode M5 as does the top of the hats. A SM57 on the bottom of the hats. On the snare top is a Rode NT-5.
Click to expand...

One thing I'd like to comment on: you might run into phase issues here. See other posts, often a hi-hat mic isn't needed at all, let alone two. Or did you mean bottom of the snare?

I've got a very low budget set it and forget it setup in my basement drum space.

I had a D112 on the kick but blew it out by using phantom power when I shouldn't have.
I also had an old radio shack boundary mic on the kick, but the internal battery ran out and I haven't replaced it

All that being said, after reading this thread, I screwed around with only using the overheads and kick mic, and the difference upon playback is really minimal. Granted, I have *very* limited mixing/mastering skills, and like a "natural" kit sound more than a modern/isolated drum-by-drum mix, but I'm really finding that the overheads pick up the whole kit quite nicely (two snares, rack tom, floor tom, kick, hats, ride, 2 crashes). Gonna move the SM57 onto the kick to see if it makes a difference.
You must log in or register to reply here.

I have also reached the SUMMIT!!! My new Summit Single Ply Mahogany snare!!
2

OT - Learning a second language in your sixties.
2 3