Mounted a cymbal stand off my bass this morning.

Yes the difference in “risk of slippage” between the vintage brackets and modern ones is night and day.

I have to always take a few moments to once again oooh and ahhh that beautiful Slingerland kit of yours, Steven. I'm a Yamaha fan, too, but there is simply a deep, classic beauty in White Marine Pearl wrap.

paul said:
My first set, a four piece Slingerland built in the late 50's, came with a bass drum mount for the ride cymbal, and I hated it. I would tighten it as much as I could, but that mount had a bad tendency to slip, whereupon my 22" ride would wind slowly fall toward the floor. There's even a video from that period of Gene Krupa soloing on national television as his ride takes a dive. The first alteration I made to those Slingerlands was to get stands for my two cymbals (it had a second bass mount for the 17" crash).

Maybe the modern mounts are more stable, but I'll pass.

I do note that most of you who use them seem to set them up so the arm is straight up. My setup required the arm to be at an angle, which puts more strain on the mount.
Click to expand...

This was my experience too with a 60's Ludwig kit. No matter how much I tightened the thing, the cymbal and stand would fall. A friend of mine in those days had a telescope cymbal stand coming out of his bass drum. This didn't offer many positioning options, but it seemed to hold better.

The problem though in those days was the lousy hardware. Today there's better hardware and it would probably work. However, a person may have more money into the hardware than they would in a cymbal stand, so why bother? Indeed, sometimes I think that drummers spend more on hardware to hold something than they have in the thing it holds.

Personally, I went to double rack toms early on so a cymbal stand mounted on the bass drum isn't an option for me anyway. However, I do have a crash cymbal mounted to my double tom holder. That struck me as a better choice than a separate stand with a boom arm, and it is.

So in general I favor economizing as much as possible on stands, but those old bass drum mounted cymbal stands were terrible.

I use them as well. They are a great add on to any kit I think.

I have to admit while this kit is %100 Maple, built like a rock and sounds fantastic I did figure given it being OCDP I might as well give it a chance. After playing it this weekend I have to say I don't regret it one bit and I wouldn't hesitate to do it again to an "even nicer" kit. 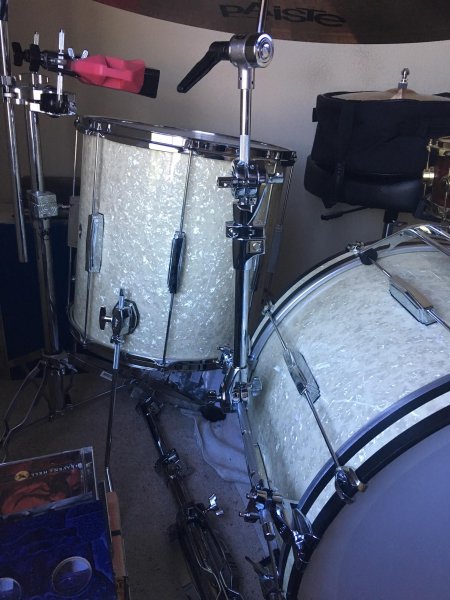 i recently put my 65's back to normal .... cymbal stand and tom mount

I'm using the Ludwig Scissor Lift from a Floor Tom leg at times but that tends be a little heavy on the balancing factor. I'm thinking of replacing one of the Bass Drum lugs with the ATLAS Tom holder and mounting the ride from there. No holes drilled.