My First Foray into Bosphorus ... all thanks to the DFO family!!

My First Foray into Bosphorus…

So the truth is, I’m a HUGE fan of Turkish made cymbals. But of course in all fairness, I’m a pretty big fan of the Chinese, Italian and US interpretations as well… but I do have a strong affinity towards the hand crafted variety out of Turkey. I have had many examples from a great number of brands, and I have taken the time to build two wonderfully different Turkish rigs with Istanbul Mehmet (Nostalgia) and Istanbul Agop (Signature) already. Knowing the history and how they fit into the Istanbul legacy, I have always found Bosphorus Cymbals interesting but never played that many.

Until an opportunity came my way!

All images are the new cymbals on my practice kit... 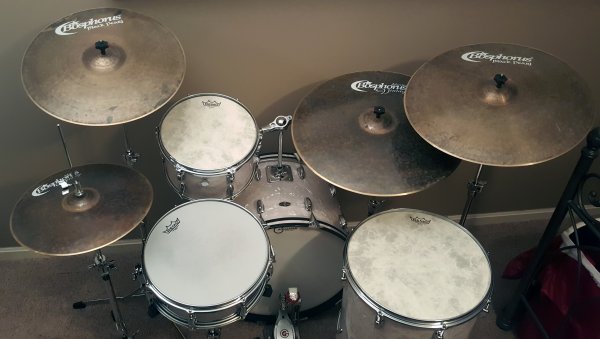 I was recently helping a friend’s church put together a kit for their worship service and was looking for a nice balanced, lower volume set of cymbals. The budget was fairly limited but could have easily been filled with nice selection of used A’s and AA’s found aplenty everywhere you look. Of course those tend to be much brighter and heavier than the application would allow so I kept digging.

I reached out to a professional drum flipper friend of mine in Alabama and asked what he had available. He said he had just picked up a set of custom Gretsch drums along with a small set of Bosphorus Black Pearls the day before in Nashville and he thought they would fit well for my needs. A few photos and some price discussions later and they were on the way back to Tennessee.

I was excited to say the least as I have mentioned, I was very interested in trying a set of Bosphorus for myself. The set arrived with an 18” BP crash, a 20” BP ride and a set of 14” BP hats. Man, I was hooked immediately! I knew this was a set I wanted to build off of for myself and keep looking for the Church more cymbals.

So that brings us to the starting point… I did indeed place a well-blended and nice sounding set of lower volume Sabina’s in the church, and even at $100 under budget as well. So here I was at the start of something pretty cool but it was not quite complete due to the sizes and lack of a proper ride. While the 20” was listed as a ride, it was just masquerading as such… this thing is a wonderful crash! And to complicate things a bit more, I just could not get my head around the 14” hats. They really sounded nice, but I have played 15” and 16” hats for so long, these just felt like toys to me! I just never got comfortable with them and decided to search for a replacement for those as well.

So here is where my brethren on the DFO boards came in… I posted that I was looking to trade or sell the hats and was looking for set of 15” hats and a 22” Bosphorus ride. I had a ton of great offers and all even provided audio or video clips (a real plus when buying cymbals) and the puzzle pieces started falling into place. The 14” Black Pearl hats sold here on DFO to a long time member, and JazzDrumGuy offered me a stunning set of 15” Master Vintage Hats while Drumreverie hooked me up with a sweet, sweet 22” Master Vintage ride! Overnight, well over a 3 week period actually, I went from wanting to explore and test the Bosphorus world to actually owning an amazing, well matched set!

After all was done and the smoke cleared, this is what I had accumulated… 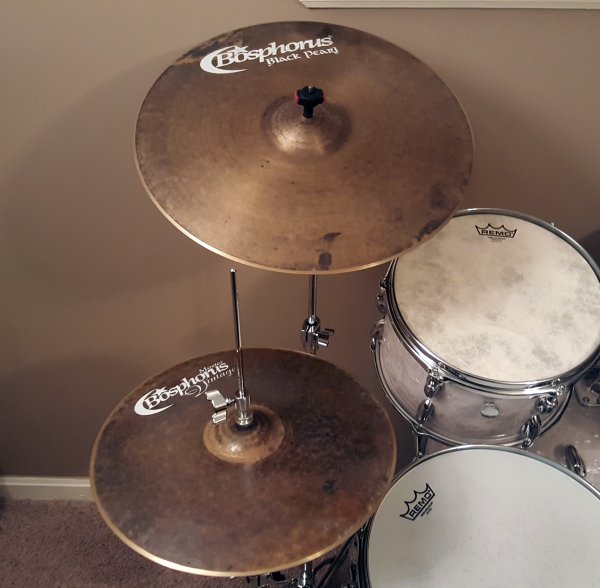 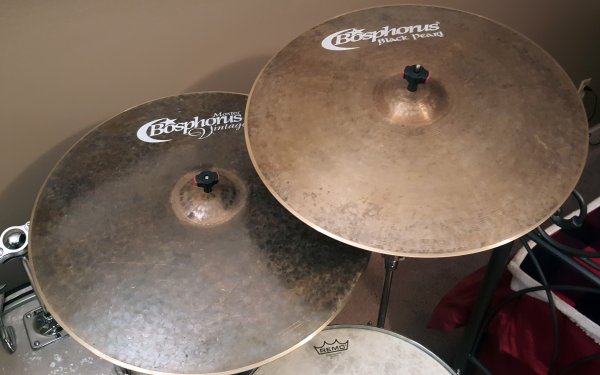 The cymbals are remarkable thin towards the edges and that belies a little of the higher weight numbers for a these series. The Black Pearl crashes paired wonderfully well with the Master Vintage line not only in tonality but even in appearance. While the BP’s are re-hammered after lathing, they are then chemically patina’d (I removed about half the coating to brighten them up just a touch to better fill the role of dedicated crashes), the Master Vintage on the other hand remain un-lathed and thus retain a natural dark, raw look. So even visually these two series fit seamlessly together.

Tone wise, I at first thought I would not like the ride as well as I had hopped, but one it played with the two BP crashes, it was a great fit and earned its spot in the set immediately. The 15” hats may be my favorite part of the rig as it plays like a dream and sounds full and fat without being heavy under the stick on foot. I like the 18” crash, but really love the 20” on my right. All in all, a successful pairing of two series with what one might assume was a preconceived plan.

I have this rig on my practice set and they are a blast to play. I don’t know quite yet where and when they will find their way back into a live gig but I know the right situation will arise soon, They are all brighter than I normally play, but not harsh, so I am sure they will have a turn in my rotation. But for now they are played every day. I sold all the cymbals on my practice set as well as the original 14” BP hats, so my net investment is pretty minimal once all was done. I don’t know that I am moved to the point of actively looking for more Bosphorus plates right now, in part because these came together so well and I don’t need the additional palette of color at the moment (I already have 4 other full sets).

But for now, I wanted to share the fun of putting this set together and say thanks to all the DFO members that helped me realize this goal so quickly. Thanks for the long read, you know how it is… No one in my house could care less about my new toys! 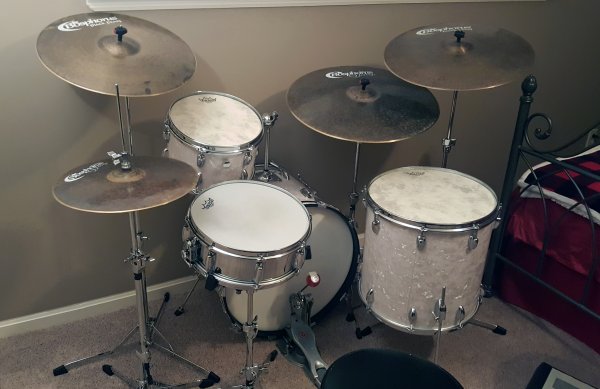