I'm finally done. My dream kit, an eBay wreck, purchased two years ago. She is a 5-ply lacquer kit, whose finish has lightened over her forty years. She is darker under the lugs, but not as dark as the catalog implies. Enjoy! 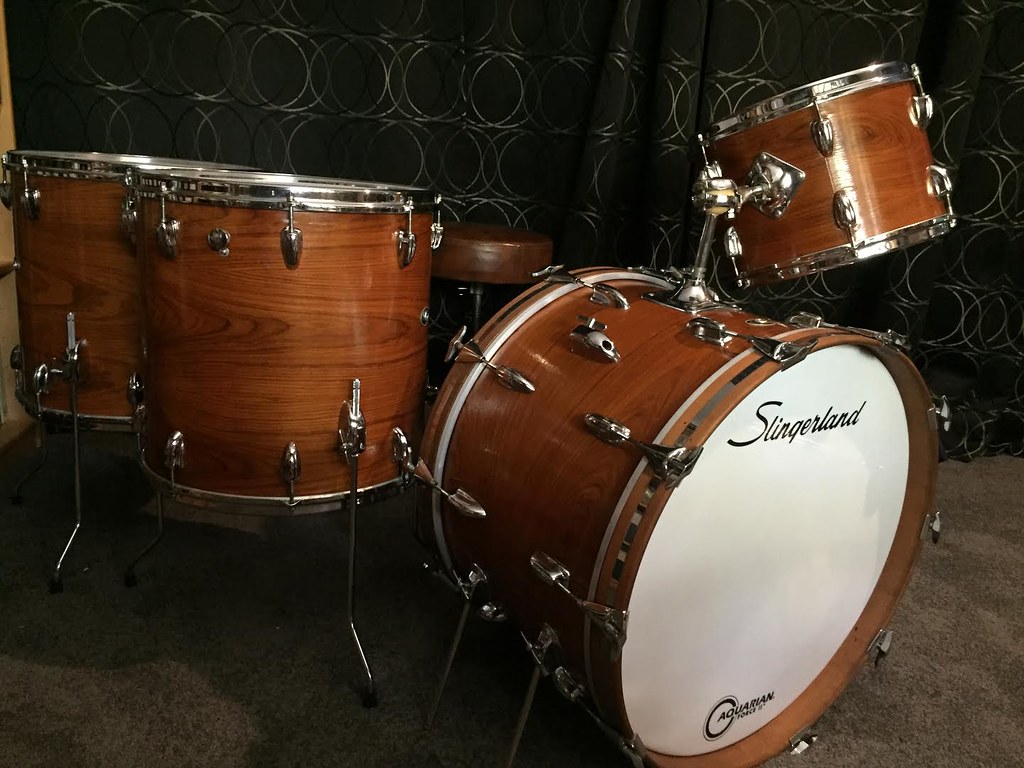 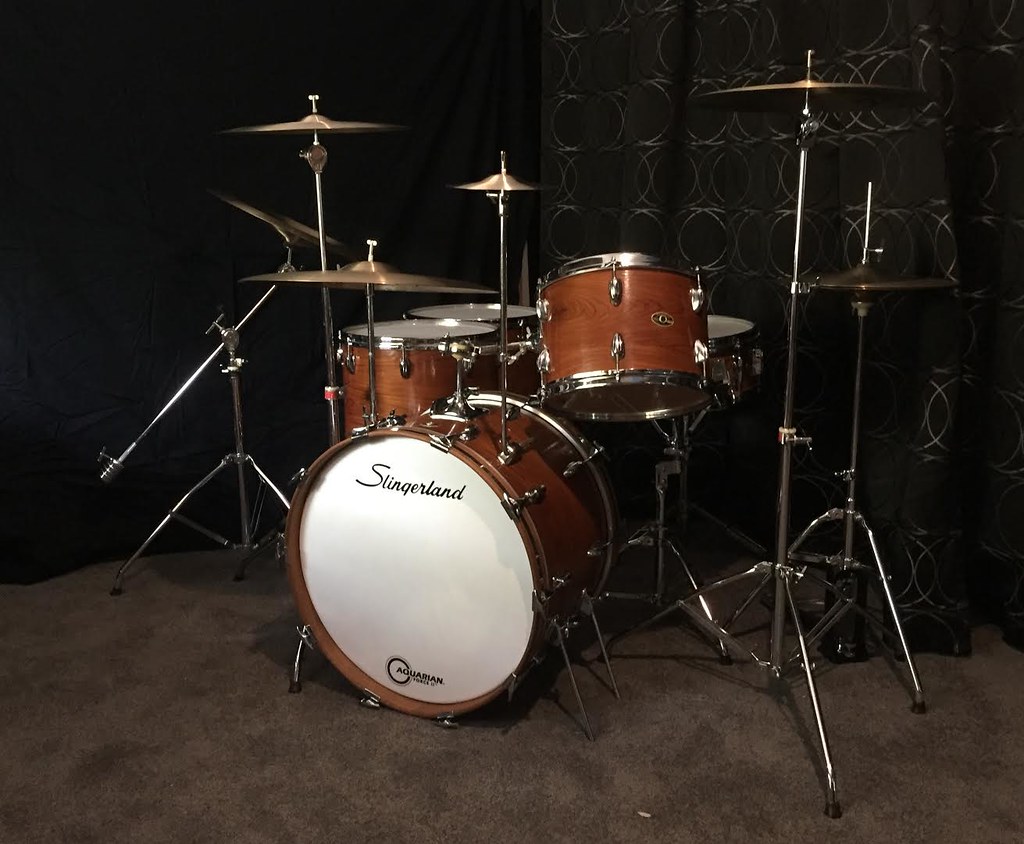 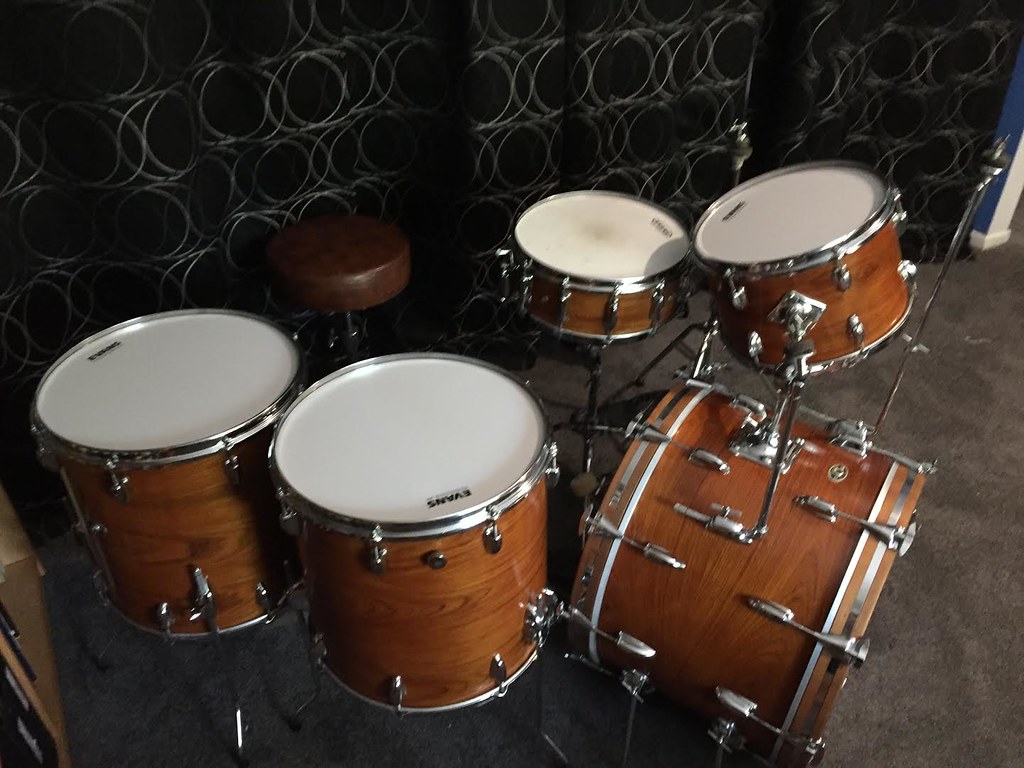 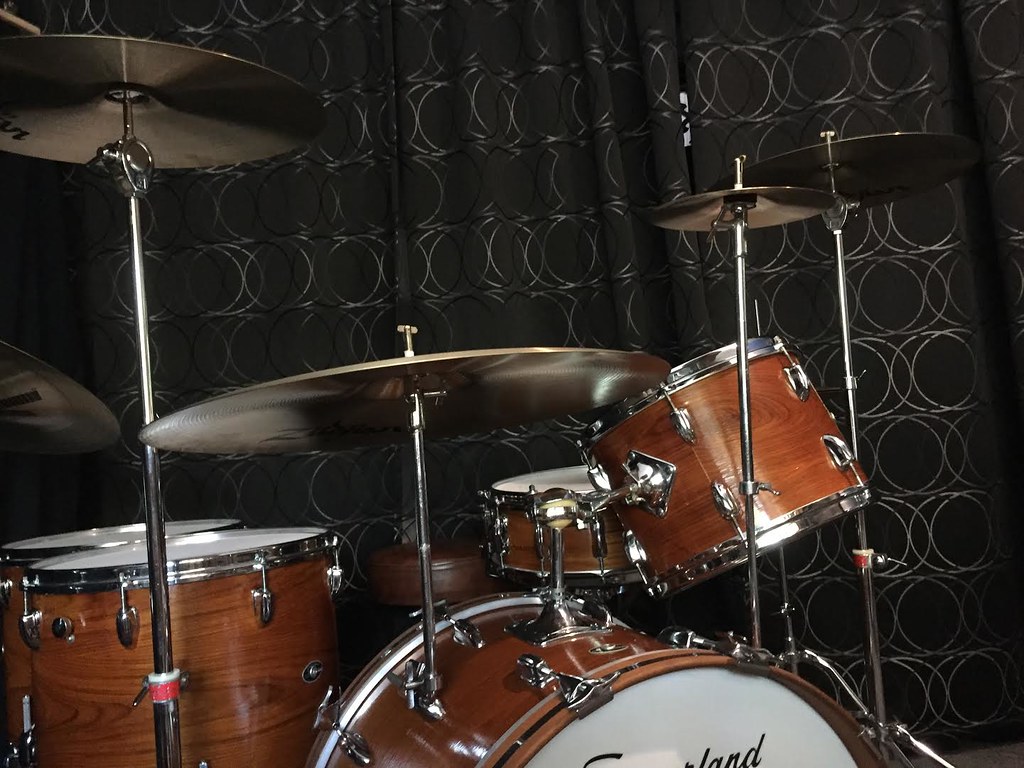 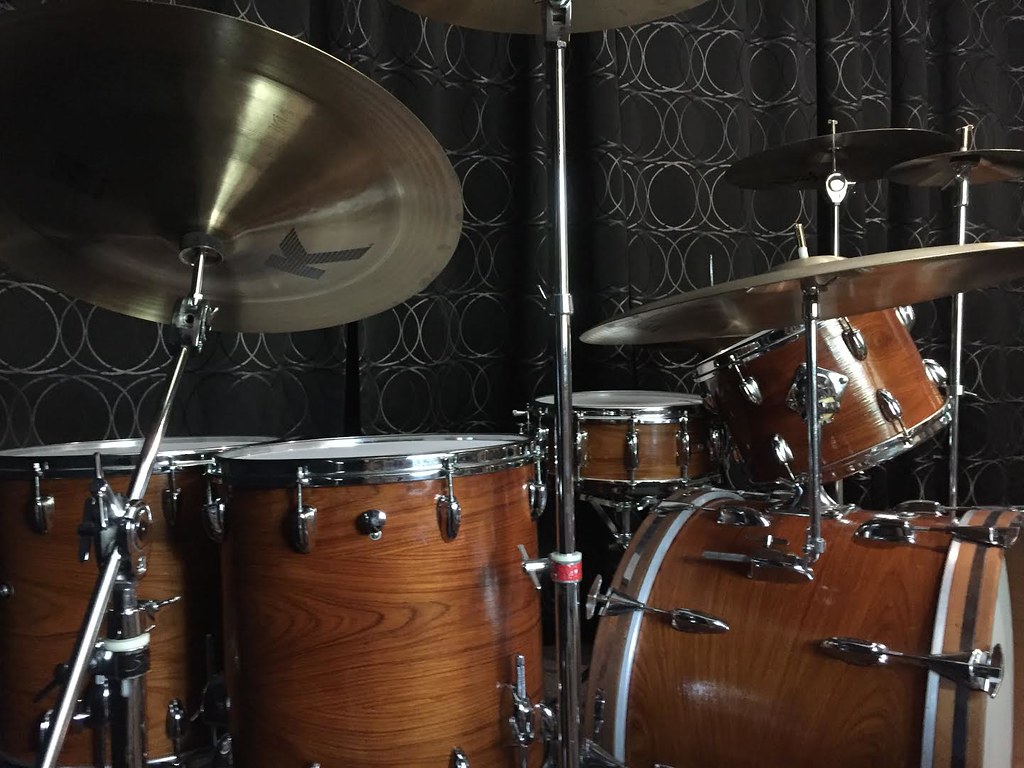 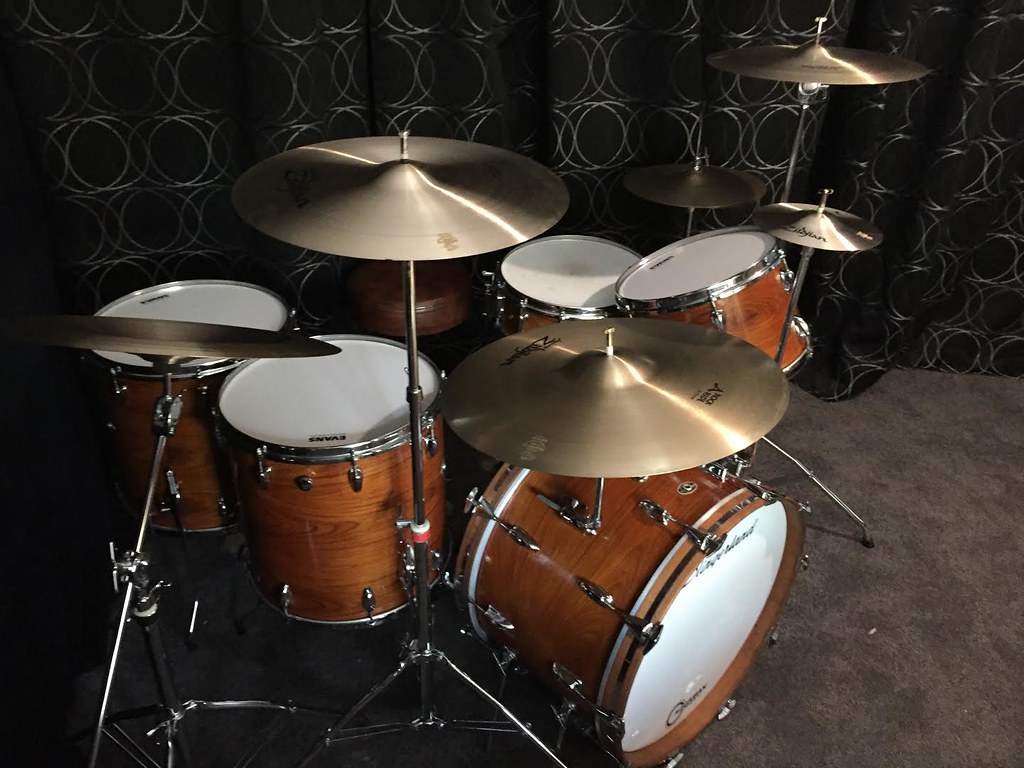 Very nice! Are you Hank?

No, I'm not Hank. The photo is from a 1979 issue of Modern Drummer, showing that Johnny Carson had one of these exact rosewood kits. Note the grain pattern on his floor tom!

Gorgeous set!!!
Right down to the cymbal wing nuts. Can't recall what they are called.
Steve

Gooood grief!!!
Those are from my favorite tiny 1 year window of Slingerland builds.
I have the Oakwood Lacquer in 3 ply.
Your kit is ridiculously beautiful.
Freekin amazing drums.
K

Did you have to re-finish it?

Beautiful looking kit. Great restoration work! Does the set o matic tom holder choke that 13" tom at all? I'm considering the Maxwell repro and want to make sure there's no choking.

Great looking kit!
I got that catalog from my brother, after he had been in the USA for the summer. Spent hours drooling over the kits, and this I particular.
And I'm a Ludwig guy!!
/L

What do you say when words are not enough? Wow! That's what you say.
F

I didn't have to refinish it. The great number of nicks ands scratches completely vanished after two applications of wood oil to the injured areas. Its hard to tell even six months later, where they were. No reapplication of oil needed yet. Rosewood veneer is very forgiving. About three quarters of the hardware had to me replaced, due to rust and pitting. All four spurs were shot. This kit was gigged hard judging for the BD head biker-band-stickers. But the shells are in the round and the bearing edges are perfect.

I had to spend a lot of money with the drum-strippers, but it went to a good cause. The price of the parts exceeded the kit herself! I really lucked out and found a pair of mint, replacement wooden Slingerand hoops on ebay, I suspect from a mahogany kit. They are not as dark as the split, rusted originals.

I literally slapped on the new heads for the photo shoot, without fine tuning, and shockingly, they sounded great! No where near as finicky as my Rogers! I love how the two 16" floor toms can sound like a 16" and an 18"!

The 13" is not choked at all, in fact you might have to use the tone control knob. Remember those? But make sure you use Evans heads, some of the modern heads won't fit Slingerland shells, for some reason.

WARNING: Don't use furniture repair marker pens on veneer kits, or even stained kits, for that matter. They look ok at first, but then turn redish, and stand out worse than the scratch itself. It tried one on a test spot, on one of the floor toms. Bad decision!

CURE: Make a thick paste of baking soda, rub lightly with the grain, and let sit for 20 minutes. The Baking Soda completely pulls the ink back out.
Last edited: May 16, 2019

The original owner was happy to see these! Delighted that they got a new life. He sent me this picture of the drums from 1983. He bought them new in 1980. Notice that they were darker, but not like the catalog. Thanks to Ron X for the picture. An unusual cymbal arrangement to be sure. 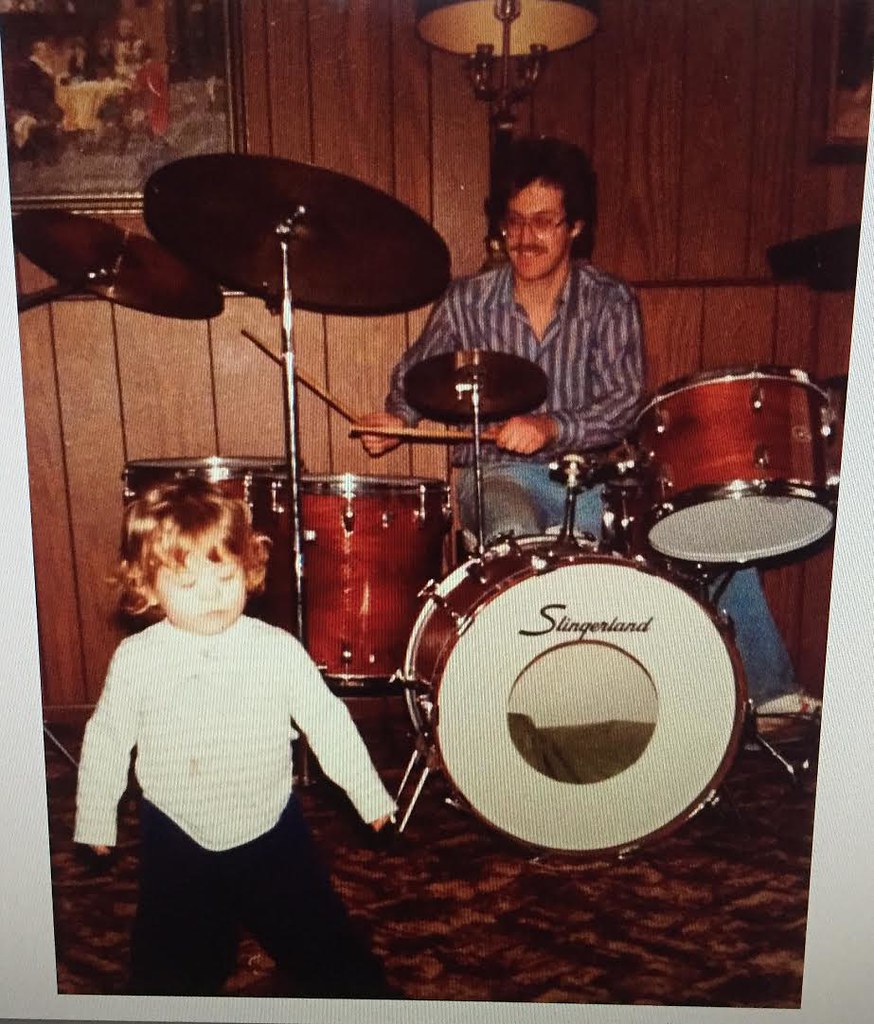 Great job! They look awesome! Did you have to replace the chrome inlay on the bass drum hoops? If so where did you get it?
F

No. I bought replacement hoops with perfect metal inlays. The bass drum they were attached to must have been perfect, begging the question why did the part it out in the first place. The old inlays were rusted, and the wood stained darker..
A

Pics of rosewood from the 1979 Slingerland catalog. Note that they look dark, like Rogers "New Mahogany", but my drums are closer to Rogers "Koa" instead:

The following concert bass drum is also rosewood, and it looks lighter. Compare it to the mahogany bass drum next to it:

Are there solvents that I shouldn't use on brass?