That's a beautiful drum, Gary! Thanks for valuable input. Does it have the cast hoops?

Yes, mine does have cast hoops. I actually prefer cast hoops, but I understand liking triple flange as well. I can't imagine my Supraphonic with cast hoops

My 14" x 7" Nobel & Cooley SS Maple was made in 1988. I acquired mine in 2009, it is a great sounding drum. In the eleven years that I've owned mine I have zero issues with it. The brass was discolored when I bought it, it ads character. 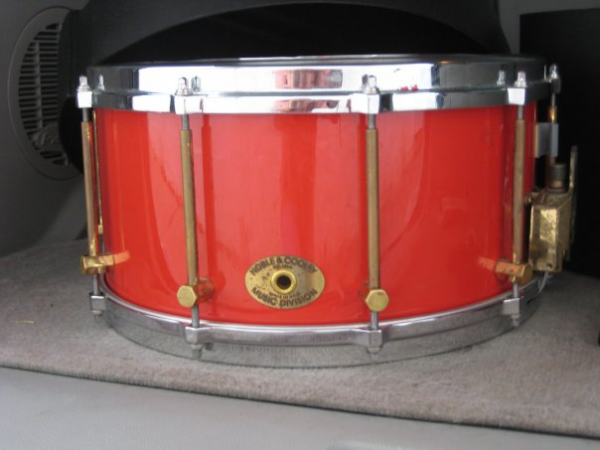 Thank you, it sounds amazing.
M

Would you say that the NC original inhouse hoops are significantly different to the aftermarket diecasts that they use now? If so, how?

I am frustrated by the changed and now very long delivery time at Thomann (7-9 weeks!!!), and there is a Classic Maple available at another European store for the same price as the Thomann with triple flange, the difference being finish (Thomann: Clear Gloss/Other place: Clear Matte (clear oil, they call it). The serial nr of this drum begins with #13, so it was produced in 2013. It has been for sale, new in its box since then. Is that something to be concerned about, do you think? (Not that it hasn't been sold, but that it is seven years old, although never used.)

I am not too keen on regular heavy diecast hoops on my snare drums, and would prefer triple flange. I got word from NC that their triple flange hoops are just a standard 2.3 mm hoop, so it would be easy and affordable to replace the diecasts, if I don't like them.

Also, any comments regarding the two different finish options? It's just aesthetics, right?

Here is a picture I just received of the diecast rims on the snare from 2013. Does this look like the original inhouse rims, or the new Worldmaxes?

MagnusNordén said:
Here is a picture I just received of the diecast rims on the snare from 2013. Does this look like the original inhouse rims, or the new Worldmaxes?

I'll reply to myself: I have been in touch with Nick Jones at NC. He says that they ran out of their own diecast hoops and started using aftermarket ones in ca 2010. The hoops on the 2013 snare drum are aftermarket.

I've had a couple of N&C snares and I've tried their diecast hoops and then standard diecast hoops, I didn't hear a difference in sound at all. It's a diecast hoop, it sounds like a diecast hoop. I ended up changing them both out for triple flange 2.3mm and in my opinion they sound better.

I think the issue is the old die cast hoops had a bit of a different profile and where the holes were drilled were a little different. The aftermarket hoops pull on the lugs slightly inward, which makes them sometimes a little tricky to get on. The triple flanged hoops have enough space in the holes to accommodate for this.

OK, so I have now bought the drum with the diecast hoops, the never used one from 2013. It was the only 7x14 Classic Maple that I could find, new, in-store, for immediate delivery in Europe. I bought it from Station Music in Germany.

Here are a couple of pics that they sent me (the reason for strange angles is that I asked for a shot of the butt side, I had been hoping for drum key screws, not screw driver screws).

I'm happy and excited, and think I actually prefer the oiled finish to the clear lacquer.

A big thank you to everyone who helped me in this thread.

Looking forward to hearing your review. My drum has the same finish but triple flanged hoops. Beautiful, beautiful drum. Congratulations!


MagnusNordén said:
OK, so I have now bought the drum with the diecast hoops, the never used one from 2013. It was the only 7x14 Classic Maple that I could find, new, in-store, for immediate delivery in Europe. I bought it from Station Music in Germany.

Here are a couple of pics that they sent me (the reason for strange angles is that I asked for a shot of the butt side, I had been hoping for drum key screws, not screw driver screws).

I'm happy and excited, and think I actually prefer the oiled finish to the clear lacquer.

A big thank you to everyone who helped me in this thread.

I think the snare looks very classy in that finish. Congratulations!
P

From what I remember ,the nodal point system was to allow for the shell to resonate more and NC patented the design.
I've played a few and couldn't tell you yes or no if it adds to the drums sound.
Sounds like a marketing ploy,but that's why folks get payed $$$ to differentiate products.
Would like to own one ,but at @$1K it's a bit too steep a price as I own two solid shell DW's I picked up for $200 that sound quite nice.
Hate the round lugs,but the sound is quite nice.
M

So, today the drum arrived from Germany! I went to my practice room with it, removed the heads, tensioned them up, and played the drum for about an hour or so. What a great instrument! Compared to my Premier Craviotto it is quite different, which is exactly what I had hoped: NC is 10 lugs, PC is 8; NC is diecast hoops, PC is triple flanged; NC is 45 degree edges, no countercut, PC is 45 or 30 degree (I think) with countercuts; NC is 7 inches deep, PC is 5.5. Both are maple, SS snares with rerings, so they are kindred spirits.

Anyway, the NC has at least one tension rod which binds so I couldn't do it fingertight. However, apart from that, everything is smooth. Tuning the drum was easy, and I have tried it at some kind of medium tuning today. I will try it at a higher tuning, perhaps tomorrow.

What blew me away immediately were three things: 1) the extreme sensitivity of this drum, 2) it's extreme dynamic range, and 3) it's very clear tone.

I've got an old early 1960s Gretsch RB kit (12, 14, 20) in my practice room. It's a battered kit which I got for a great price since it was painted maroon sometime in the beginning of time. Underneath, it is WMP, and for five years now, I have intended to have it renovated. Ideally, just having the paint removed, and the original wrap revealed. But I digress...

The RB kit has a lovely tone, too, and diecast hoops, obviously. The NC merged sonically with the RB kit almost magically. Playing the snare with snares off was a treat, beautiful clear tones. Engaging the snares was also very lovely.

I am not sure what I think of the NC wires, though. I can see where they excel, and I guess they are part of the reason the drum is so sensitive. But I usually prefer wires with less strands than 20 on my drums. On the PC I have only a 12 strand wire. So I kind of wonder what the NC would sound like with a set of 12 or 16 strands.

I attach a selection of pics of the drum, alone, and with the RB kit.

A huge thank you hug (from a safe virtual distance, obviously) to all who helped me in this topic. 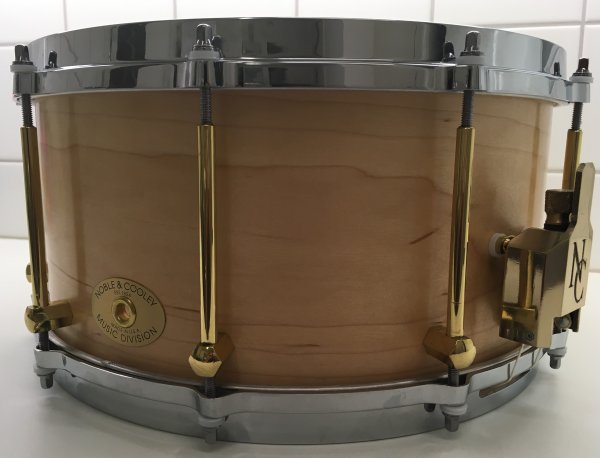 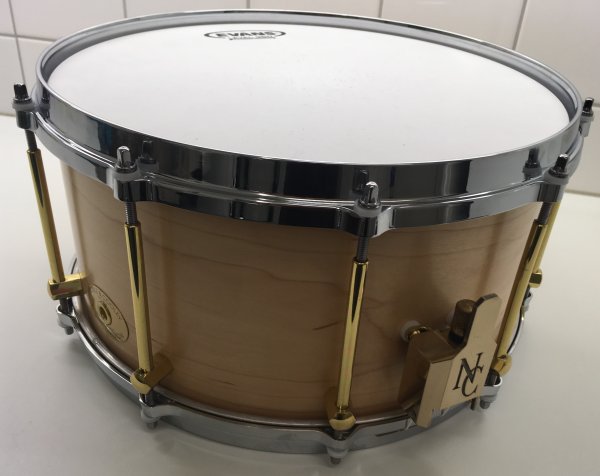 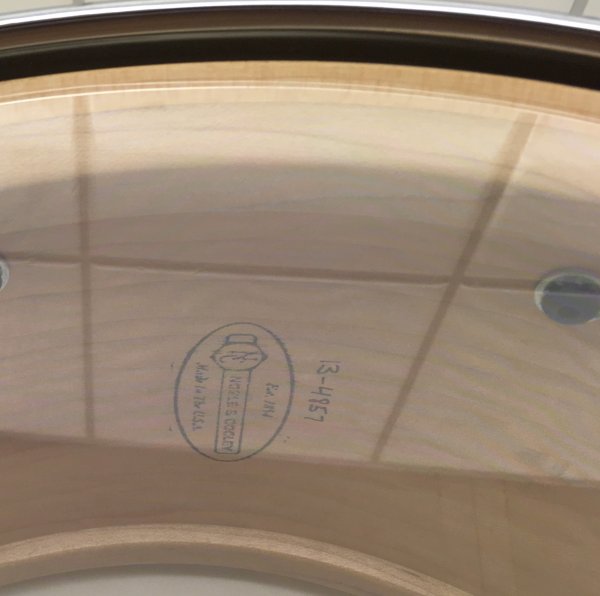 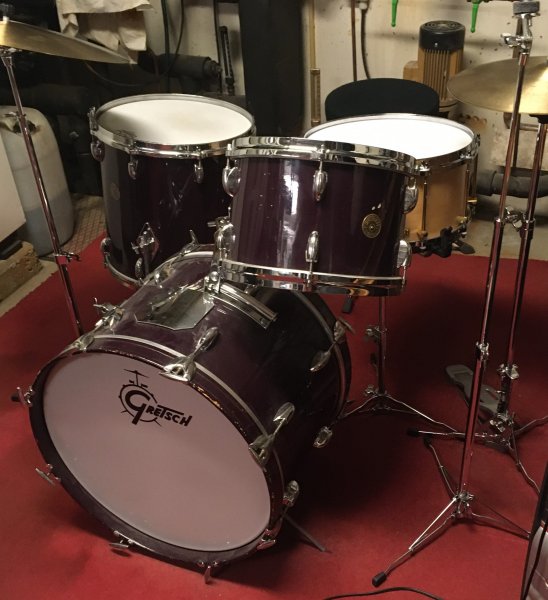 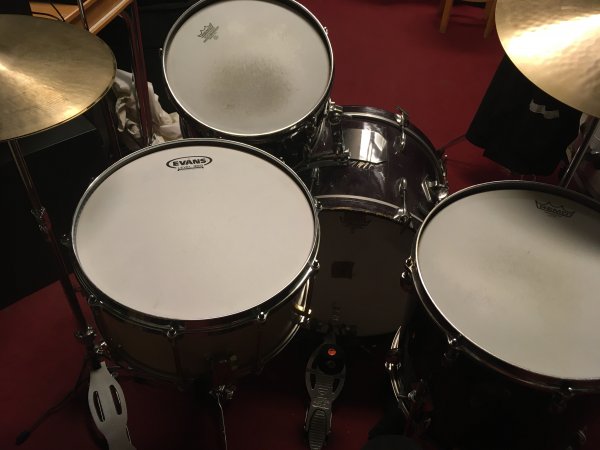 I did SO many gigs with my Broadkasters and the Noble and Cooley! I don't know why, exactly, but it's a perfect combo. 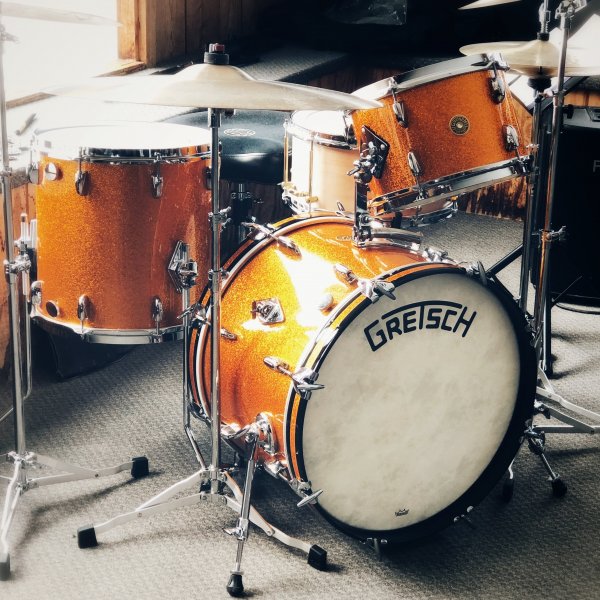 I recently watched the DCP N&C snare shootout and I thought the maple sounded the best. These days it's very rare for my local Guitar Center to stock much high end stuff, they might have a Black Beauty and that's it, so it's been a long time since I've played a N&C in person.

I was thinking about getting a new snare and a N&C SS was high on the list, maybe in the top 3-4 snares I was considering (Dunnett 2N, Ludwig BB and Pearl Reference Brass were the others). It's also the most old school design and I had some concerns if this snare was really for me. This thread alleviates the concerns I had although I'm still inclined to go with some of the metal snares I was considering.
You must log in or register to reply here.

A
Hello from a new member (and Ludwig Black Beauty content)