numbers stamped below USA on older A what do they represent

This 20 ride has numbers stamped below the Made in USA
What do they signify? 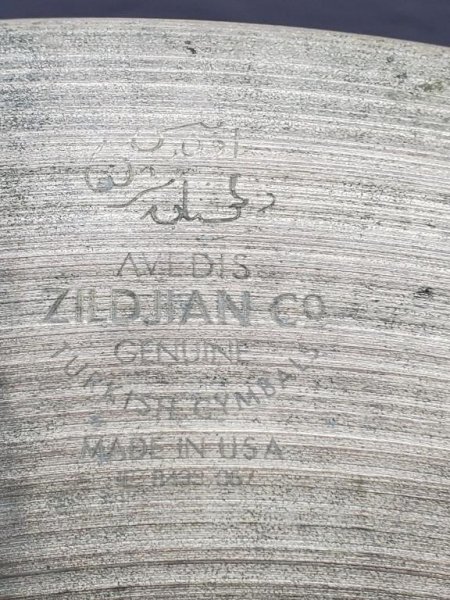 That last line signifies a "younger" Zildjian made from 1994 or later. A simple internet search on "how to date a Zildjian cymbal" will reveal the code.

Reverb also has a dating guide on their sight - very simplistic. The first 2 letters on the serial number give the year/month of production.
The stamp is also lasered and not die struck. Another feature of 99.9% of the 1994 and later cymbals. The Avedis 100th Anniversay Year 20" cymbals
are one (and maybe the only?) exception where they were die struck with an old 1960's stamp.

thanks
for the info

According to this timeline the laser serial number began in 1994 using the letters ID (I being the 9th letter of the alphabet, and D being the 4th).

I'm trying to concentrate on updating the wiki rather than maintaining my older site. The changeover is taking longer than I had hoped, but serial numbers was an easy change.

Yours is cymbal 67 from oven batch 8?38 and year IE? 1995? but your image has been degraded by the DFO software so I can't read it very well. You might be able to get a complete reading of it holding the cymbal in your hands and using a magnifying glass. Hint: the batch number is what Zildjian customer service can look up and confirm the model.
You must log in or register to reply here.
Share:
Facebook Twitter Reddit Pinterest Tumblr WhatsApp Email Share Link