Picked up a 64 Slingerland set last week. Very yellowed, in a very even way. I like it a lot as it is. Funny though, after pulling the heads no difference over that last bit of the shell where you normally would not been seeing because of the heads. Smoke worked its way that far back? Don’t know. But I’ll take it! 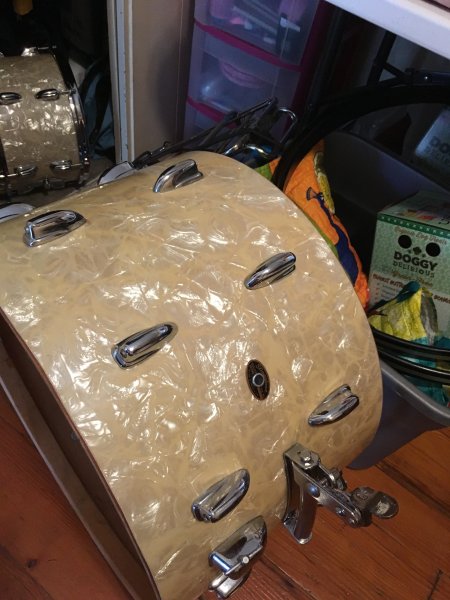 That's the best kind, all even and butterscotch-like and delicious. Nice find!

I'd wet myself to find a nice Slingerland kit like that. I absolutely LOVE white marine pearl in all of its variations, and this one is luscious. Congratulations!!!

I think in some cases the yellowing is due to a chemical reaction within the wrap. Not sure how else to explain even overall yellowing including in areas never (or much less) exposed to UV.

I have a WMP Club Date set with similar yellowing over the whole surface of both drums (12/20). They are beautiful in their new "butterscotch" marine pearl, the problem was in finding a matching floor tom. The one I ended up with is much closer to its original white so not even close on matching, but it does the job. C'est la vie.
Last edited: Sep 4, 2019

They were in the old style canvas bags when I got them. I wonder if that had anything to do with it? 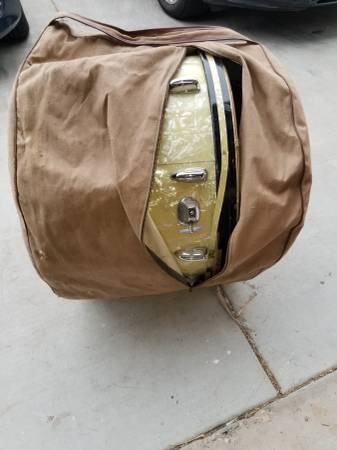 K.O. said:
Those are beautiful!

I think in some cases the yellowing is due to a chemical reaction within the wrap. Not sure how else to explain even overall yellowing including in areas never (or much less) exposed to UV or other environmental causes.
the problem was in finding a matching floor tom. The one I ended up with is much closer to its original white so not even close on matching, but it does the job. C'est la vie.
Click to expand...

I have a 15 inch marcher on its way. it looks to be a very similar yellow. We’ll see how well it matches. I can accept what it is is as OK.

This marcher came to me this week. There is an uneven center burst of really white marine in the center all around the drum.

What does the shell look like under the lugs? If its the same, it's possible the drum has been re-wrapped.

Pretty sure the wrap is original. Heads were even still original!

Somewhere I have pics of two 13" Slingerland WMP toms from 2 different sets. They were both from the same era, but one had been gigged with a lot, and the other had been in a high school its whole life. The one in the high school was still white, while the other had yellowed. I'm guessing the HS drum had never been exposed to sunlight, cigarette smoke or temperature extremes.

I had a 58 WFL kit in various degrees of yellowing!
Love that and the cig burns!
What a gem youve got there!

I've run into a couple kits and single drums of WMP over the past couple of years. Ones that were mostly stored in their cases or canvas bags remained pretty darn white. The ones exposed to air much of their lives and/or rarely cased, turned the typical shades of yellow. Someone could have had the bags. But only used them when the drums left the house.
T

My "butterscotch" Club Dates were literally caked with dust when I got them. Original heads in almost new, albeit dusty, condition and there was even still the semi-rotted remains of the tom wrench bag hanging from one of the bass drum T rods. I don't think they ever saw much use. They were so dirty that the Salvation Army put them out on the floor of their local "as-is" outlet rather than their regular store down the street or (more likely) shunting them off to their auction site.

That sort of thick dust coating can really only accumulate with years (decades) of something sitting in one spot undisturbed. My thought is they were in an attic somewhere. In a typical attic they would not be exposed to a lot of light, but they would likely get exposed to a lot of heat. And such heat would be evenly distributed to the whole shell, regardless of how it was oriented or if they were in bags or cases. Maybe in some cases this yellowing was "baked" into the wrap. The long term slow heat causing reactions in the chemistry in the wrap...like cheese browning on a pizza. Figure two or three decades of daily exposure to temperatures of over 100° F for at least 6 months at a stretch per year (longer in the south and year round in some regions). Just a theory of course but seem plausible in these situations where the yellowing is so even that it seems unlikely that sunlight was the cause.

Once I cleaned all the dust off, which seemed like it was about a quarter inch deep, I found immaculate chrome and the deeply yellowed WMP wrap. Beautiful, with only downside being the aforementioned difficulty in matching other drums to it. Maybe I just need to stick my floor tom and snare in an oven or smokehouse for a few weeks or the attic of an old house for 20-30 years.

The marcher i picked up for a floor turned out to be an unbelievable match! 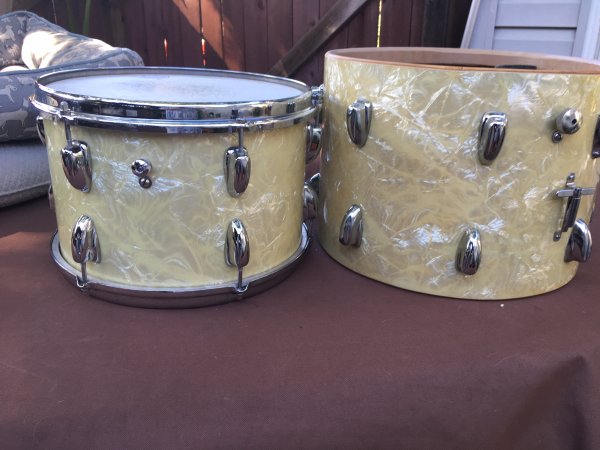 “Oddly even”.
I see what you did there.

My guess on yellowing is tannins from the (often unfinished) wood underneath the wrap being a major component of the phenomenon. If the drums were kept in bags, UV wouldn’t be much of a factor, so could account for the even yellowing.

I prefer the naturally yellow white pearl to the Aged White Pearl wraps we see today, but in a pinch they’ll do.

If your wrap is cellulose-based, its yellowing might make it even more flammable: please take care!
B

In the Rogers world, I believe "yellowing" is called "Spanish-Gold-ing".

I've posted this b4, Avatar shows Sam's WMP as new after wrapping, here's the same kit tday.....pretty oddly even... 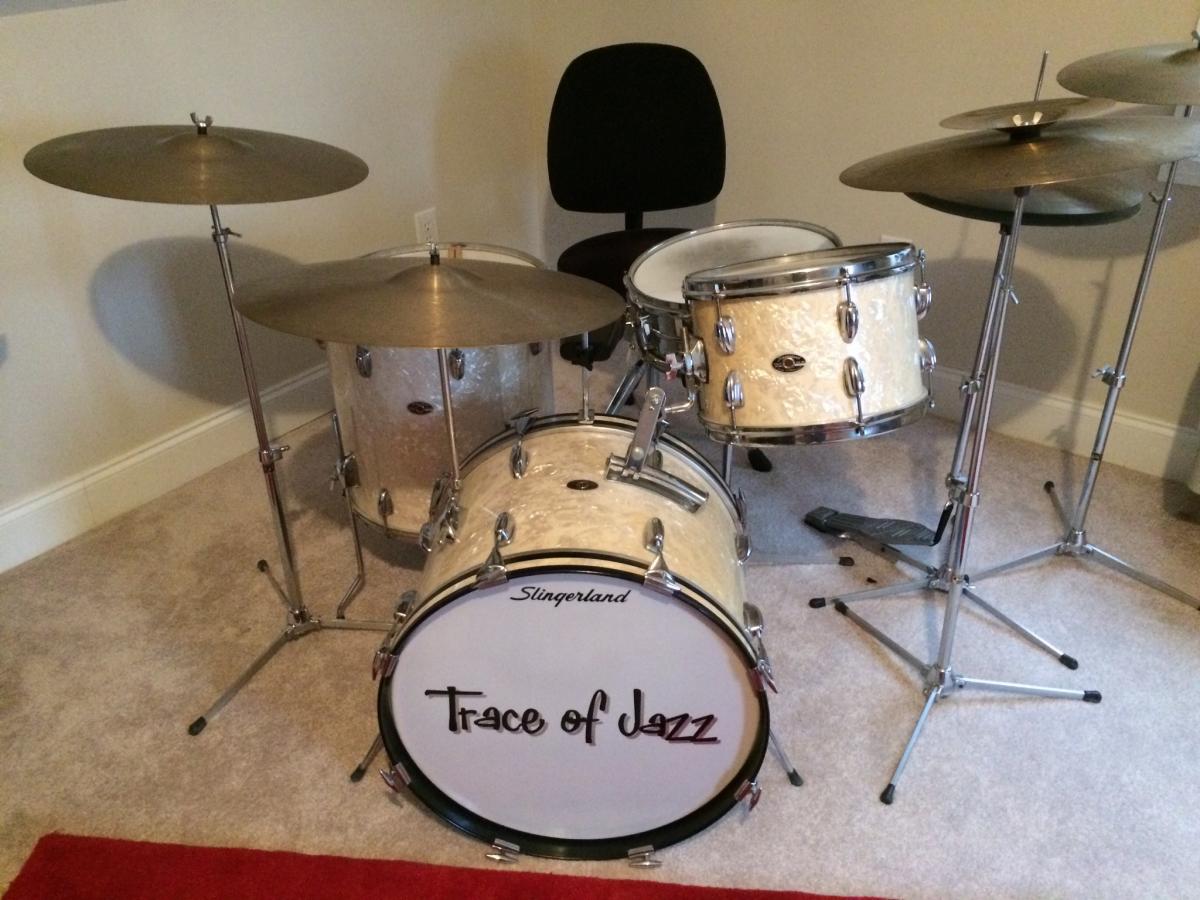 cause of yellowing on maple laquered drums?