I actually like the wrap the way it is. Very cool unique kit!

As everyone says, it's only original once. It's a unique piece of drum history, and I bet you would pay a lot for a patina like that on an A&F drum!

DuplexTim said:
As my name suggests, I gotta “thing” for Duplex drums! Well, scored this baby locally-ish and man o man! When I get them refurbished, they’re going to be super cool. In all my years of owning and refurbishing Duplex kits I’ve only seen a picture of one of these once! Now I own a Spirit Of St Louis kit in BOP-ish sizes. Dating is tricky. It’s either pre-WW2 or some rareity post-war kit. All my research so far would lead me to believe pre-war, but the kick size 18”, is odd for the era. Ive never seen a SOSTL drum in 18”. I’ve seem marchers almost the size if the FT. Looking forward to this project! If you have any pics of anything like it, please post!!! This will be a recover! I’ll post progress! View attachment 504131
Click to expand...

www.drumforum.org
I had to sell that in winter of 1992 to pay rent when I was laid off.
PM me, please!!

Holy cow this getting interesting!

squidart said:
Holy cow this getting interesting!
Click to expand...

DuplexTim is fairly close to me, so I'm 99.9% positive that these are the same drums. Picture isn't the greatest, but they should be gold glass glitter.

SKSMITH said:
DuplexTim is fairly close to me, so I'm 99.9% positive that these are the same drums. Picture isn't the greatest, but they should be gold glass glitter.
Click to expand...

Odds are pretty stinkin' good with an 18" bass drum! This is crazy. In a really good way

We continue to dig into it.

www.drumforum.org
I had to sell that in winter of 1992 to pay rent when I was laid off.
PM me, please!!
Click to expand...

"what if any was the outcome of this deal/ reunion etc?>>!

Ok, so I’ve been super busy and progress has been excruciatingly slow. I’m calling this a “Refurberation” which is a cross between refurbished and restoration. New Glass Glitter from Precision. New tension rods. Aluminum has been cleaned and polished and waxed. Today I finally got the grommets for the vent (I forgot to order…doh! Thought I had some…but they were brass instead of steel). Anyway… finished the 13” and rough tuned it. It likes a higher tension and has a nice tone. Look forward to finishing the rest of the kit. LOTS of rust on the steel parts. and man… neglect is a sad thing on vintage instruments. But, it looks nice and sounds great. The design is seriously ahead of its time and for a 1940’s kit… it’s totally futuristic and unique. Uber rare! Honored to be the steward of such a unique piece of history! Last pic is the “before “! More to come!

DuplexTim, Any updates?
I have cash!!

Well that is definitely one of the most interesting kits I have seen in a long time.

DuplexTim said:
They claimed they were the only pearl covered metal drum. At the time 1930’s, they were well known and were what made Duplex well known. Duplex had sales all over the US and in 6 countries. Not bad for a very small drum manufacturer. But when metal rationing hit US manufacturers in ‘41, that pretty much shut Duplex down. It’s hard to find information about them after the late ‘30’s.
Click to expand...

Interesting that the drums use a metal shell, since William Ludwig was once an employee of Duplex and went to Boulanger with the idea of a metal shelled drum, after seeing Tom Mill's Sonor snare drum.
The story goes that Boulanger "poo-poo'd" the idea and turned down Ludwig's request (Boulanger's opinion was that drums are made of wood. End of discussion), thus prompting him to quit Duplex and start his own company.
....and now we see metal shelled Duplex drums.
Could be Boulanger's way of saying..."oopsie".

Super cool kit, though Tim.
Definately a rare beast.
I'd like to see some video of you playing those, once you get them restored.
Are you going use Calf heads, too?
I don't think I've ever heard calf heads on a metal shelled drum. That would be quite interesting to see.

Amazingly cool set (and sounds like still developing) back story too… interested to see how this one turns out. With look of those rims and all, looks like encapsulated dynamite… I bet sound just wants to come bursting out of those babies! 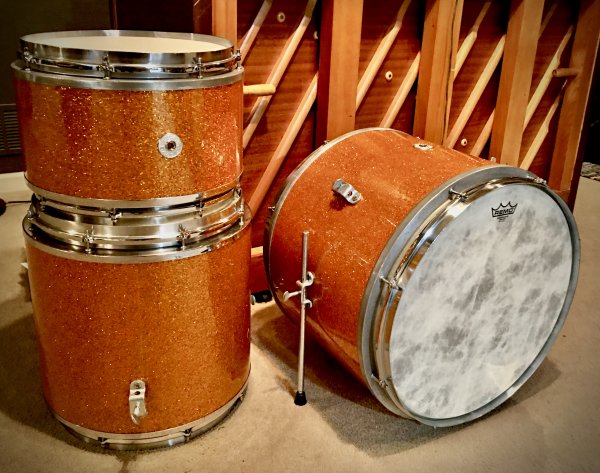 Getting closer to finishing these. Every step has been a “deal” and I am going to have to redo some of the brackets and I am waiting on a new vent gromme for the floor Tom. But should be finished within the week!

where 's this coming from.. 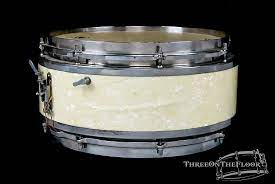 dropped in media or something) i dunno) 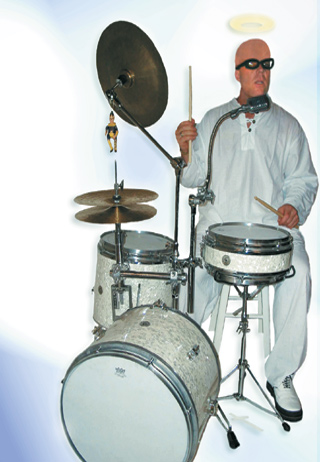 SKSMITH said:
DuplexTim, Any updates?
I have cash!!
Click to expand...

DuplexTim said:
View attachment 534860
Getting closer to finishing these. Every step has been a “deal” and I am going to have to redo some of the brackets and I am waiting on a new vent gromme for the floor Tom. But should be finished within the week!
Click to expand...