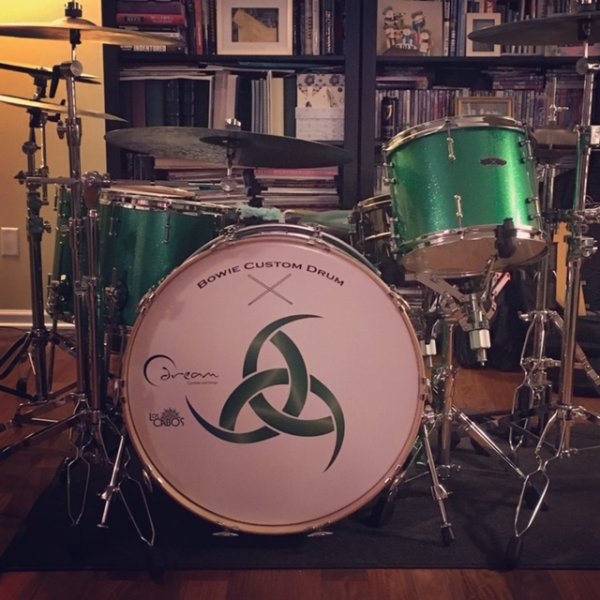 Well obviously this is not a thread I can contribute to...

Bandit said:
Well If I had to keep one it would have to be my Artic White Saturn kit.

I think that counts as at least three.

Nacci said:
It takes to long to get these bad boys set up just right to be breaking them down and moving them constantly.
Click to expand...

I guess that depends on how many drums you are using. All my gigs were usually four piece and three cymbals. I was late for a gig once, had 20 minutes to be set up and playing. Everyone wanted to help. Told them to get the hell out of the way. We started on time.

I only have one drum set so I'm just keeping that. I do have some West African drums because I am really more of a percussionist. These. been with me since the Wonder bread years '71 don't think I could ever break the chain. 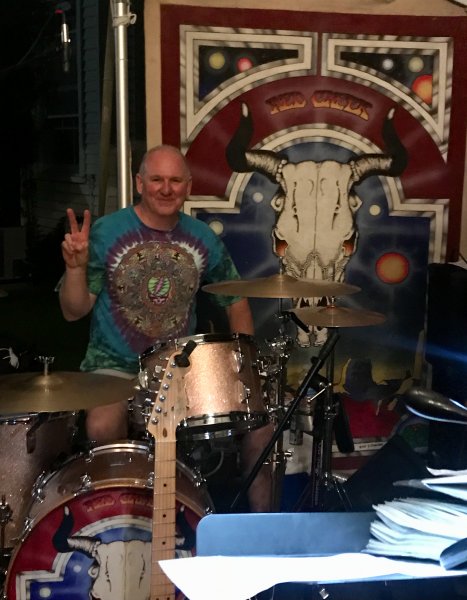 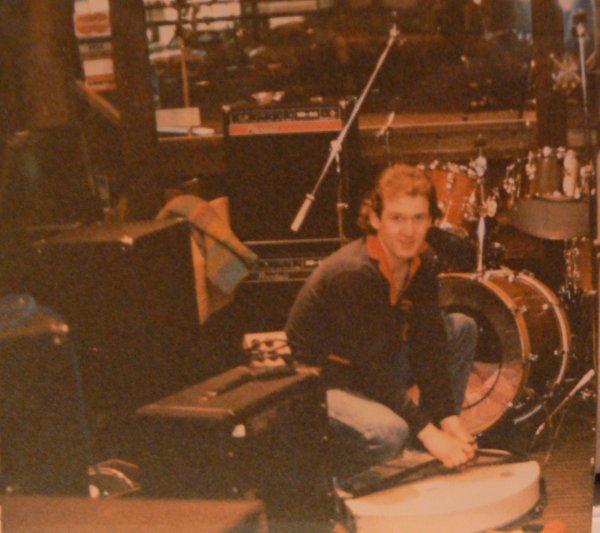 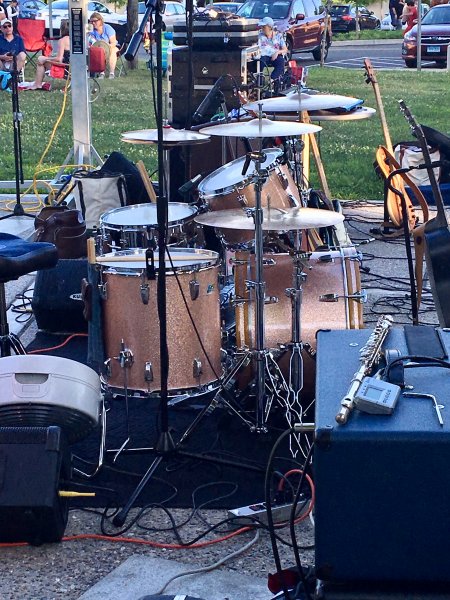 How do you like the clip-on BD spurs?
Those are the ones from Precision, right?
…been thinking along the same lines lately.

DanRH said:
Well obviously this is not a thread I can contribute to...

Elvis said:
How do you like the clip-on BD spurs?
Those are the ones from Precision, right?
…been thinking along the same lines lately.
Click to expand...

I am not sure where the BD spurs come from nor the clip-on floor tom leg fittings. The local Custom builder seems to like no intrusion into shell and could very well have sourced things from Precision. I found them useful as when I added a BD pedal riser I could move the spurs to get a better angle on the legs.

If I HAD to choose just one (I'm thinking maximum versatility here), it would probably be my newest Sonor Prolites in Light Grey. I've never played a better sounding set. 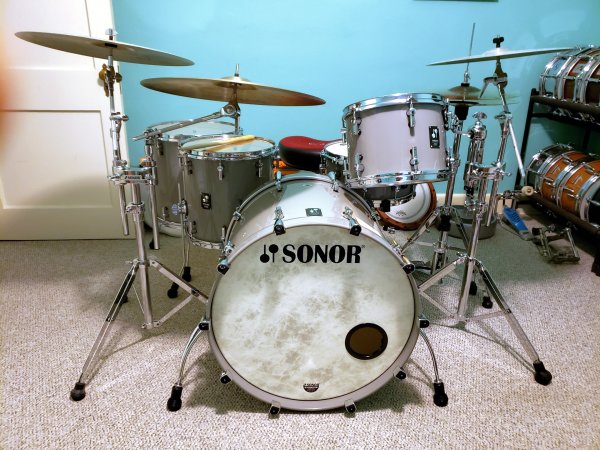 So I look at it this way: Your house is on fire. You can only save one kit before the house comes down. Which kit do you grab?

THAT question makes it a lot easier, at least for me...

Same here; I had a similar Rogers like yours in Blue Sparkle and I cry every time I read a reply like yours and I would do the same. But now I'm in a deli-ma; my large late 80"s Classic Ludwig's are in the house and my new 5 piece Classic Maple is stored in the truck. I couldn't get rid of either one right now but if the house is on fire I'm afraid it would take too long to move 9 drums outside.

All I have are my N&C CD Maple's and I love them. So those'll do just fine. If I could add on a 16" floor tom and have the kit refinished, even better. I’ve told this story before, but I’ve only had one drumset for the last 10 years. We bought a house then, and I sold off my “vintage” kits for a decent price, and bought a used PDP kit for $299. Since I only play in church, and have no storage space at home, one kit works fine for me.

Previously, I had a Gretsch 7 piece, a Rogers 4-piece, and a Tama Superstar 14x18 bass drum. That way I had one kit for rehearsals, one at church, and one for gigs. Sold both kits for more than I paid for them, so I have no regrets.
Last edited: Sep 5, 2019
O

I've never been one to accumulate drum sets (although I have accumulated random single drums) so I would stick with one set regardless.

Having recently bought Gretsch Cats in maple to get back into drumming and being impressed with them, my leaning would be to stick with roughly the same drums by Gretsch but upgrade to a quality line superior to the Cats. The Cats aren't bad for the price but I can see areas where the quality could be improved. I'd bet that a top-of-the-line Gretsch kit would be the cat's pajamas (pun noticed but not intended).

The problem is that DW bought Gretsch and I have an aversion to DW's business orientation. It makes good stuff, but seems too oriented toward cooperate expansion for my tastes. Ergo, I'd have to resist buying Gretsch again, and I'm frankly not sure what other maker I'd look at.

Though if I really had my druthers, I'd go mongrel. In the old days my set was Ludwig/Slingerland/Premier, just because it evolved that way over the years, and I almost think this is the coolest way to go. Piecing together your own kit suggests sophistication and experience coupled with a raised middle finger to marketing departments, and I like all this.

In the alternative, commissioning a set from a boutique maker would be cool--getting exactly what I want (and paying dearly for it).

Yamaha Club Customs. I've been fortunate enough to acquire a whole shell bank, but if I had to pick one kit configuration, would probably go with 20/10/12/14/16. That would cover just about anything I think.

jmpd_utoronto said:
Yamaha Club Customs. I've been fortunate enough to acquire a whole shell bank, but if I had to pick one kit configuration, would probably go with 20/10/12/14/16. That would cover just about anything I think.
Click to expand...

A shell bank is a great way to have "one kit". I've been doing this for a while with black Rogers orphans. If I had to for financial reasons I'd sell both Ludwig super classics, buy a black Rogers orphan 22" and a 13" to add to 20/12/14 (x10)/16/16 I have now. Here's a backyard pic. I added another Swivo-era 16" to the pile this summer because i couldn't bear leaving it in that dusty pawnshop.

Ps: I bet the Club Customs sound great! I saw Bill Stewart play one with Scofield and thought they sounded nice and rich 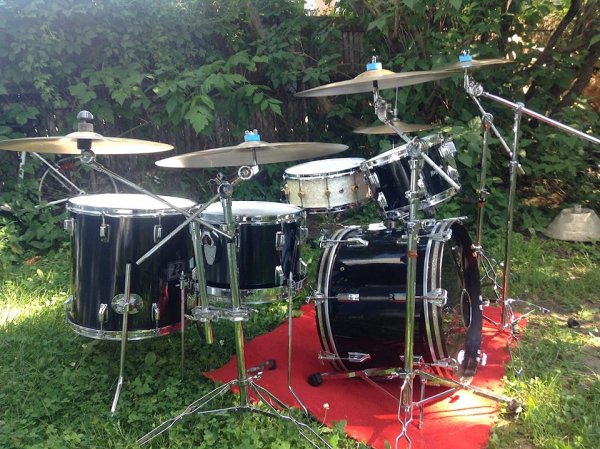 If I had to save one set if the house was on fire, It would be these that come up from the basement. jmpd_utoronto said:
Yamaha Club Customs. I've been fortunate enough to acquire a whole shell bank, but if I had to pick one kit configuration, would probably go with 20/10/12/14/16. That would cover just about anything I think.
Click to expand...

Maaaaaaybe my CCs, too. Right now, though, it would be my mid-'90s Recording Customs (12/14FT/22). But like I said in another thread, I'm always bouncing around from kit to kit when the inspiration strikes, so if this question was asked 3 months ago, I might've had a different response!
You must log in or register to reply here.