opening band and changing cymbals, no sleeves or washers on stand :(

I wouldn't say the "headliner" was really any bigger than us. It was a local cover band show. Hardly anyone there. But I was told up front to use their drums, to reduce changeover time. I "hate" using other guys drums. So far, 2 out of 3 kits from other bands were complete crap. 15 year old drum heads, parts missing from stands, etc.
W

Houndog said:
I’ve been told on almost every festival that all drummers must play the provided back line kit .
Click to expand...

The same. You just have to get on with it and try and carry spares you need for yourself.
The original post seemed to be about a show with an opening act and a headline act - not the same as a festival.
As I say, I play on rental kits 90% of the time. If I was in a support band I would pray not to have to share the headline kit. When I'm the headline drummer I move heaven and earth not to share my kit.
I toured in America headlining and the support drummer started 'playing' my expensive cymbals with a mic stand, even though he was using his own kit. Now THAT'S a jerk.
W

hector48 said:
But I was told up front to use their drums, to reduce changeover time. I "hate" using other guys drums. So far, 2 out of 3 kits from other bands were complete crap. 15 year old drum heads, parts missing from stands, etc.
Click to expand...

I feel for you. Horrible situation. But thems the breaks on small shows with multiple bands.
H

I will put Grombals on my cymbal set that I use for multi-band shows. That way I'm prepared if cymbal sleeves are crap or missing.
If the stands are nice enough, I can quickly pull out the Grombals and use the stands in the traditional sense.

bpaluzzi said:
From the sounds of it, this was an all-local show, where the difference between the "headliner" and the "opener" is an any-given-night kind of semantics. I've never seen an actual "headliner" (read: national touring act) band allow the opener to use any gear.
Click to expand...

.
Agreed. In my area (Boston) I may “headline” one night and the opener may “headline” on a bill with us a month later. (And it’s funny, as our audiences get older the earlier slots in clubs are often the most coveted ones!). But given that I am part of a drumming community, I often try to touch base with the other drummer(s) in advance of the show (thanks FB messenger!) to let them know what I’m bringing so they can plan accordingly. If I had those cymbal grommet thingys I would definitely give the other drummer a heads up in advance.

Now if it was a true headliner-opener situation, it would be surprising if they were sharing gear, but if so, all bets are off on what the opener should expect. Just be happy to have an opportunity to open for a major act.

I have a little spare hardware kit that I take with me that includes sleeves and felts. I don’t think I can remember a time when a backline kit provided a painless experience, so I figure it’s better to take a small effort to be prepared rather than face a problem that will distract you from the performance.

On a side note, it’s been my experience that grombals are the worst of any quick cymbal mounting gadgets. They wear out quickly and leave opportunity for headaches such as this, plus they don’t work with my hard case.

A $6 roll of duct tape goes along way

jptrickster said:
A $6 roll of duct tape goes along way
Click to expand...

I was going to say the same time thing.. Either that or electrical tape is always in my bag. Could serve as a quick sleeve and could
Also be bunched up top to act like a washer
Last edited: Jun 14, 2021

If I knew I was sharing a kit with another drummer and he was going on after me I would make sure he had what he needed to use his cymbals etc. It's common curtesy to accommodate those items for someone else.
Last edited: Jun 14, 2021

Kindness may be exempt for opening acts, but common courtesy should not be.
Last edited: Jun 15, 2021

jptrickster said:
A $6 roll of duct tape goes along way
Click to expand...

I keep a roll in my ATV. I fixed a flat on a dice run and that tire still had full pressure a year after. I didn't tape the sidewall hole, I rolled up duct tape like a doobie and folded it in half and plugged it.

I just stumbled on this and thought of the OP 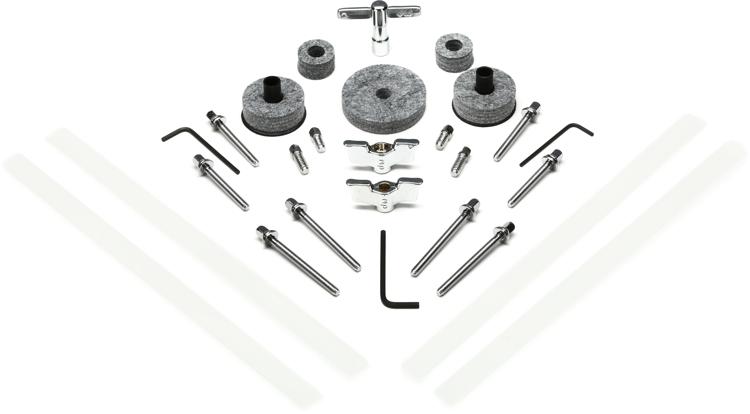 I went on shared kit one time where the hihat clutch screw to tighten on the rod was missing. The guy ahead of me brought his own hats, clutch and all. Good idea.

The bars set was in the floor; no screw. I duct taped the heck out that thing. Enough that even the band noticed the grey ball on the hats. They worked, sounded fine, but looked silly. It got squishy in the heat, but felt great. I pack a spare clutch since then.

I've played many shows as an opener and as a headliner, both locally and nationally touring. If you are ever knowingly not playing your kit, be prepared by bringing your own pedal, snare, cymbals, clutch, and cymbal washer/felt/wingnut assembly. You never know what condition the house kit is in or how another drummer is going to be with his kit. Just be prepared just in case. A rule I follow, as a headliner, I'll let the other drummer use my drums provided he uses his own cymbals snare and pedal provided does not move anything else. No re-postioning cymbals or toms.. or anything! As an opener, I play on the headliner's set as is with my "breakables". After all it's the headliners show, it sucks to go out and re set up just because you are being the good guy by making things easy for the openers and sound guy. If it is a house set, however, set that up however you like. Just don't jack with another guys set (especially memory-locks!). If you live by this rule, you'll appreciate it if you move up to the headlining slot from being an opener.

Ive always,always carried
felts,washers,wingnuts,straps for pedal,spring assembly for bass pedal and an extra clutch, snare string,about it.
Im a lefty so that is first and foremost in letting the sound man and the other drummer whats what several days or weeks before,not last minute.
If they refuse to switch,ill bring a kit,n.b.d. and ill have it pre assembled back stage. Never had problems
Last edited: Jun 14, 2021

The real question is: What were his cymbals!

From "too bad" to "just use mine?" That's very odd. I would prefer my own cymbals over someone else's I would probably have just borrowed the grommets. However I also keep duct tape and felts in my stick bag exactly for the situation.
C

We must be prepared, and we must adapt.

For me just local shows in clubs here-- usually plenty of time to sort things out beforehand.

When I’ve provided my kit as backline, I do so on the condition I can talk to the other drummer(s). I give them a rundown of what I have and what I’ll provide and what they are expected to bring. (Then I send it in email.) I also try to get to know them a bit.

Same when I’m playing someone else’s gear, I want to talk to them to see what they have, etc., with the goal of making them comfortable I’m playing their gear, and so there are no misunderstandings in the heat of action. Once I had a guy who was clearly not comfortable with me playing his DW kit, so I told him no problem I’ll bring my own. He called me an hour later, apologized, said I was obviously someone who sounded respectful, told me that the only other time he’d let someone use his kit was a bad experience. We talked gear for an hour and I ended up using his kit. I was using my Pearl piccolo a lot at the time, but also brought my Supra as he’d never played one and he ended using it that night.

I’m not a professional but I want to act professional, even if it’s amateur hour.
Last edited: Jun 15, 2021

bpaluzzi said:
From the sounds of it, this was an all-local show, where the difference between the "headliner" and the "opener" is an any-given-night kind of semantics. I've never seen an actual "headliner" (read: national touring act) band allow the opener to use any gear.
Click to expand...

One did very reluctantly for me many years ago after some sweet talking from his road crew when we were setting up. There was no room at all on the stage in one of our local clubs for my kit with their stuff on it. I used my own cymbals and snare from memory, never touched his set up from the position he had it and was very respectful of his gear but it was challenging with his positioning of everything, especially the cymbals which were way up high.

Hung out with him for a bit after the gig and he was cool about it all though. It was lucky I already had a DW5000 bass drum pedal before I played his or I would never have bought one, they had the worst action ever.
W

2and4 said:
A rule I follow, as a headliner, I'll let the other drummer use my drums provided he uses his own cymbals snare and pedal provided does not move anything else. No re-postioning cymbals or toms.. or anything!
Click to expand...

I made that deal with an opening drummer. He had brought his own kit and was allowed by the promoter to use it. He couldn't be bothered. His band put a lot of pressure on my tour manager to get me to share my drums. The deal was nothing was to be moved.
they played their set. I got onstage with a few minutes to go before our set and every memory lock I had was moved, every single stand and mount was moved, cymbals lowered, toms repositioned, snare repositioned etc. If he had left the memory locks alone it would have been OK, a quick fix, but everything was undone and randomly moved out of the way. I was furious - and no, never again.
H

While the rest of my band was setting up on stage, the "headliner" drummer was still up there messing around with his kit, adjusting tuning and such. Sound guy said that if the rest of "his" band doesn't show up by certain time, my band will do the soundcheck. That time came and went, and the drummer is still messing around. I wasn't going to tell him to move out of my way. Eventually, he gave in and realized that we, the opener, need to do the sound check. He was just a stubborn, older guy. I don't even know what his cymbals were, because the logos were gone. Probably Zildjians. They sounded good enough. He did help me get my snare, throne, and pedals off the stage when we were finished, which was nice, but I honestly think he only did it to get himself up there faster. Singer from the main band had good things to say about our set. Drummer said nothing. And I said nothing to him. If my band ever suggests playing with this band again, I will tell them that I'm really not interested.
You must log in or register to reply here.

Of all things, a hardware rant

If you had to choose.