Well, three years ago (or is it four, time flies) I stopped eating meat - mainly because my oldest son stopped a couple of years earlier and as a reaction/statement against modern meat industry.
I eat as much as before but I’ve lost several pounds. My old clothes (and I mean old!) I was about to give away fits again.
Still eat butter, cheese and other milk based products, as well as eggs, since I think it would be to hard to get all the right nutritions I need.
No new excersise, no less amount of food.
The first signs of wellbeing was that I ”felt” lighter even before it showed.

I lost 55lbs 6 years ago. It was too much actually so I intentionally gained back 20. Been within a 5lb range ever since.

Not much more I can add to what's been said by those who have done it as well.

I get where you're coming from, but obesity is a pretty serious problem and it affects a helluva lot of people adversely. If someone is ok with being fat, that's fine. But a lot of people aren't and they feel powerless to change themselves, and mostly because their relationship with food has gone sideways and possibly morphed into an addiction.

Most of us likely wouldn't say to someone struggling with drugs or booze "I'm having a line and a shot right now" but it's more or less OK to sh$t on people with weight problems. As I said, I get it -- I've been a healthy weight in my 60 years a lot more than not. Still, I'm not gonna take a dump on people who are looking for some sort of help or encouragement in getting their health in order.

Rice, breads, beer - anything with a lot of carbs in. Don't eliminate them, you'll go into ketoacidosis (your body basically starts consuming itself). Just cut back on them moderately to strongly, and sugars.

Don't be afraid of fats, in moderation naturally.

Get a fitbit, it'll pace you to keep active.

I lost 100lbs over the last two years on this routine. My eating habits changed for good and I'm always active. From 295 to currently 195 and I'm inching toward my "normal" BMI of 180.

Hard to get started but easy after you do.
Click to expand...

Not exactly correct. Following a no carb diet will put you in Ketosis, not Ketoacidosis. Two very different things.

Far too much time on my hands these days .
Yesterday I watched Jaws 1 2 3 and 4 ( Revenge Of ...) It takes a lot of popcorn and chips to get through a marathon like that .

I worked hard physical labour for 40 years, sometimes with people who had the communication skills of chimpanzees . It made me fit and resilient and like money in the bank I can draw on the interest today when I'm less inclined to exert myself .

Tornado said:
I don't know why I didn't think I needed to lose 30lbs or 20lbs back when that was what I needed to lose, but here I am. I saw some recent pictures and I was shocked. I just don't see it in the mirror like I do in pics. I've stopped drinking which I think will result in 10lbs pretty rapidly. Then the hard work comes for the last 30. I weighed 220lbs the last time I checked, and my target is 180. I should probably be 170, but I've maintained quite a bit of muscle from heavy lifting, so I won't look bad at 180. I looked OK at 200 while lifting regularly. But muscle or not, I need to weigh a lot less to feel better. Wish me luck, I don't like being hungry.
Click to expand...

Good luck, brother! I am wanting to lose 20 to 25 myself. It is not easy but I known I feel better when I weigh less!

oneeyedcat said:
Not exactly correct. Following a no carb diet will put you in Ketosis, not Ketoacidosis. Two very different things.

Correct, my bad. I said that with a Polish accent.

Keto flu I think it's called.

DanRH said:
I’ve lost 60 pounds, starting 1/1/19. I use the app Lose It and am religious on journaling all my food and exercise. I ain’t gonna kid you, you have to work at it. I started at 228 and am now 168-172. I exercise 6 days a week with a minimum 3 hours a day. The app takes your exercise into account and you know how much you can eat. An Apple Watch/iPhone helps greatly because it tracks all your steps. I feel great. Here’s a couple before and after shots of me. Good luck!! View attachment 459245

I don’t know anyone that has 3 hours a day to exercise that are not retired and/or single.

I also need to get my eating habits under control again. I was able to shed over 30 lbs a few years ago but in the meantime I gained it all back and then some. Ideally, I really should try to be as close to 220 as possible, which means I need to drop about 35lbs. Good luck everyone!

dale w miller said:
I don’t know anyone that has 3 hours a day to exercise that are not retired and/or single.
Click to expand...

It has to be snuck in.

When I was really getting into being active I would walk to work in the morning, 3.5 miles away, took me an hour. Showered at home but wiped down with alcohol wipes in the office (mornings are really cool in the high desert) then around the park a couple times at lunch then walk back home in the 90 degree blistering heat.

So it's doable if you take smaller bites out of it.

Many good posts, I think one of them said start small and go from there, good point. I think people can get overwhelmed with big changes. One thing I do is eat an open faced sandwich, (I come home from work for lunch) so I make my own, that saves around 2300 calories a month, just by that one step.

I also stand a lot instead of sitting, I have a shoulder thing that can flare up from too much sitting, actually burns more calories than sitting, not much but some but I stand a lot, you get used to it.

Old PIT Guy said:
I get where you're coming from, but obesity is a pretty serious problem and it affects a helluva lot of people adversely.
Click to expand...

You're right, I shouldn't have posted that - I extend my sincere best wishes to those with weight struggles.

BennyK said:
Yesterday I watched Jaws 1 2 3 and 4 ( Revenge Of ...) It takes a lot of popcorn and chips to get through a marathon like that .
Click to expand...

dale w miller said:
I don’t know anyone that has 3 hours a day to exercise that are not retired and/or single.
Click to expand...

True words spoken BUT when I was working, I still rode 3 hours. I took the bike to work and commuted home. If you want to put the work in as I did, you find a way. Being single, I can't speak of. I have a very supportive wife who prefers a thin hubby. I make it work. But yes, being retired certainly helps.
D

My brother lost around 40 pounds by going keto and intermittent fasting. A few of my friends are also on the bandwagon with generally good results. Haven't tried any of it myself as I'm naturally slender and stress tends to kill my appetite. And stress being in no short supply nowadays, I've lost at least 10 pounds of lean mass since spring. So I've started to train again (mostly calisthenics) and I try to at least take some powdered proteins daily to mitigate further loss.

I wish you luck in your endeavor. Being more nimble increases stamina so, it's good for keeping the pocket going longer

What worked for me was cutting down carbs to 20-50 gr. per day (Keto/Low carb diet) plus 17/7 intermittent fasting (first meal at noon, last meal at dinner). Lost 50 punds in 8 months.

I also exercise a lot (mostly swimming), 6 days a week.

I wouldn’t call this a diet. It’s a change in lifestyle. 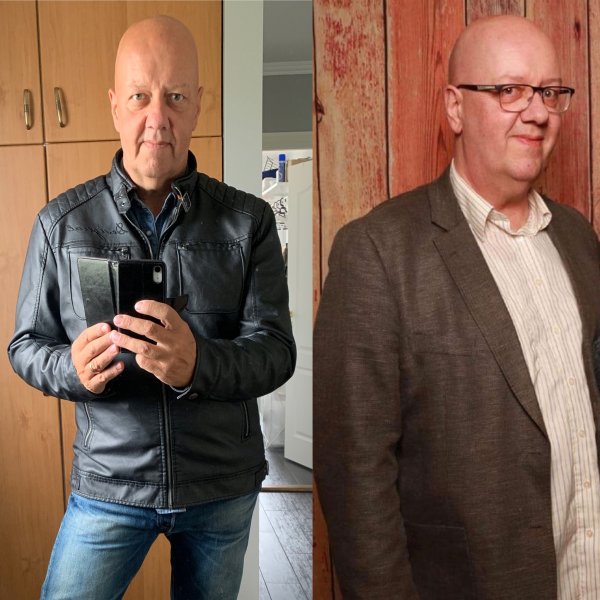 I've lost 55 lbs since March. For the first time I believe that what I'm doing is easy to sustain long term.

1. Slow down, take small bites and enjoy them, putting the fork down in between.
2. Choose the small plate rather than the larger one. If eating out, then make a line across half of each part and only consider half as part of the meal. If that's too much temptation then ask for the to go carton at the beginning of the meal and get it out of your sight from the start.
3. Always leave part of each portion on the plate if you can. Yes, I mean part of the half sized portion on your small plate. If you're eating slowly, taking small bites, and enjoying each one, then you'll be surprisingly full enough to leave some there and not miss it.
4. If you're a beer lover then don't drink craft beer. They're as fattening as a big piece of cake. Light beer is cool, contrary to what the current beer snobbery trend would indicate. Believe me, I was a craft beer snob, but not any more. Looking and feeling great is much cooler than drinking a desert in a glass.

I was at my regular doctor check up week before last and she told me my diet makes a lot of sense. For me, it's about better portion and eating habits, not watching numbers. I honestly don't know how I used to put away all the food I used to in a meal. It would make me sick now.
B

As others have said, and you seem to realize already, it's the junk food that really adds on the pounds.

Also, and I don't know how old you are, but as I get older my metabolism slows down and I don't need to eat as much. That might be SOME of it.

Regardless, I think you know what to do, and wish you the best.
M

I'm at 160 and would prefer to be at 140. This thread has been very helpful to me. I will go back through it and take notes on some of the ideas presented. I just wanted to let you know that sharing your journey has been appreciated.

halldorl said:
What worked for me was cutting down carbs to 20-50 gr. per day (Keto/Low carb diet) plus 17/7 intermittent fasting (first meal at noon, last meal at dinner). Lost 50 punds in 8 months.

I also exercise a lot (mostly swimming), 6 days a week.

I wouldn’t call this a diet. It’s a change in lifestyle.

Looking great!
You must log in or register to reply here.

Man on the silver mountain