Black Label said:
I note that it has no serial number - is that because it was a budget model? It just has Paiste 404 engraved below the bell.
Click to expand...

although be warned the info on that site is not entirely consistent with other info I've got for the years for other lines. It all needs independent verification, but it is an ok first approximation until we get better info.

I don't know about the 404 series not having serial numbers. I'd be interested to see a close up of any ink, and the Paiste 404. I presume that the Paiste 404 is the usual die stamped form (not what I call engraved, although there seems to be very different usage by Paiste centric drummers including "embossed" for what I would call die stamped). Also the case of the Paiste matters. Paiste used

and the case is significant. So I expect yours is PAISTE 404 and that fits with Brown Ink. I'd be interested in hearing from other 404 owners about the serial numbers (or lack thereof) on their cymbals. Maybe they didn't have serial numbers, and maybe yours is a mistake. The factory isn't 100% accurate in everything they do, and it is possible that the serial number was either left off or struck so lightly it isn't visible. But we would know a bit more if we have the context of knowing what other 404s out there have in terms of serial numbers. A quick look and I've found an example of a 1985 404 Brown Label, and also seen a 1984 and a 1983. Die stamped example of serial number with series name 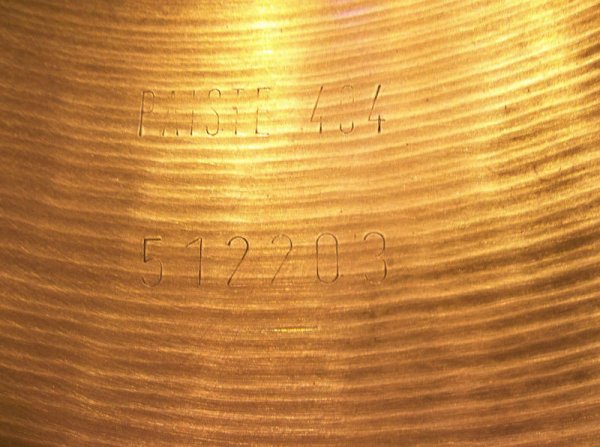 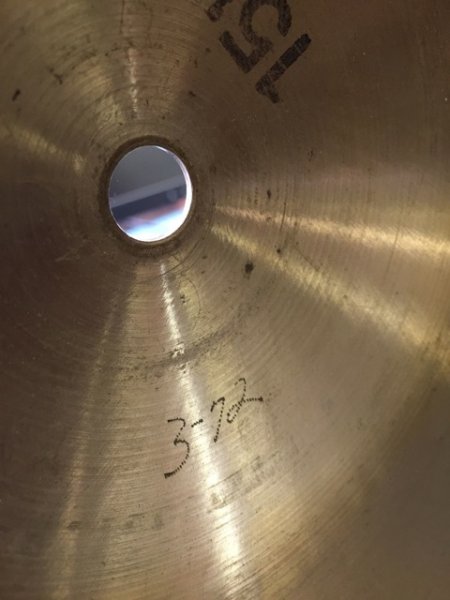 The advantage of keeping the terms for these methods separate is why I eschew "engraved" for things which are die stamped. The Pasite centric term "embossed" is used in place of "engraved" or "carved" which I maintain isn't the very best way to describe the process of pressing a pattern in with a die stamp. Maybe it's a Swiss thing.

Decided last night that mine works really well as what I think Phil Rudd called a swimming cymbal-crashing as the ride pattern. Makes sense as I always loved the sound of Paistes in this use such as Alex Van Halen and Charlie Benante.

The 404s and 505s were both released in 1978. I have the original Paiste price sheet from a former Paiste employee and the 70s era Paiste catalogs to prove this.


There are many dating errors on that chart on NF Drums. Most stem from Paiste's poor recollection of its own history. Franz (the guy that put that site and chart together) did the best he could based on the materials he had on hand and help from Paiste's "crack" customer service team over ten years ago. Much more information has come to light over the last few years. A lot of it dug out of the bowels of the internet and collectors by myself and a few like-minded seekers of the true Paiste history.

The 505s (but not 404s) were available from the German factory in 1987 although these were most likely leftovers. I do have one 505 logged with a 1987 serial, however and there are a few oddball 404s out there with '88 serial numbers.

The Brown 404s and Green 505s are serial numbered like the other Paistes of the early to mid 80s with PAISTE 404 or PAISTE 505 above the serial number.
However, there are a lot of Swiss color logo 404s and 505s that have the PAISTE and series name engraving but don't have serial numbers. These are most likely from 1981 when the switch was made to color. As I mentioned above, the Swiss Black Labels weren't serialed and it seems this briefly carried over into the early phase of the color logos.
Last edited: Sep 4, 2019

I walked into a music shop in the 1980s and was looking for a new Paiste ride cymbal. They had only 2 to choose from, a 404 and a 2oo2. I walked out of there with the 2oo2. But, I actually really liked the 404. In fact, from about 10 feet away I preferred the 404 when the guy played it for me. I always thought about going back and picking up that 404, but never did.

Burps said:
I walked into a music shop in the 1980s and was looking for a new Paiste ride cymbal. They had only 2 to choose from, a 404 and a 2oo2. I walked out of there with the 2oo2. But, I actually really liked the 404. In fact, from about 10 feet away I preferred the 404 when the guy played it for me. I always thought about going back and picking up that 404, but never did.
Click to expand...

....and this is the basis of his recurring nightmare he suffers from, waking up all sweaty with his heart pounding hard and fast, panting in fear's relentless ironhold of terror!
Poor boy can't find a therapist to help him cope, as it appears he is the only one suffering this fate. Everyone else bought that bargain of greatness!

404s are just slightly "cheesy" when compared to their big brothers, and generally thinner all around. I, myself, mix 505s and 2002s all the time. In fact they are my main crash cymbals no matter what I use as a ride. If you like it that is all that counts. They cut, but some people find them too bright and shimmery.

As a matter of fact, I think this is THE 404 set - as the heaviest of everything. And I must say - the trashiness that people report, hard to hear it in these weights in my opinion. They record great - just sound fabulous.

I will use my 505s when I want a more refined/slick modern sound - but these 404s often get the job instead.