vinnyrac63 said:
I hate to be the guy to complain, but those are WAY too many cymbals for a line that's already WAY too expensive. Glaringly absent are 1) 13" heavy hats Reissuing those cymbals could single handedly make 13" hats a thing again 2) 21" heavy-one of the greatest rock and general purpose rides ever made 3) 22 Paper Thin w/ rivets for the jazzers. 4) 22" or 18" flat ride. That's it! That's all they should have done, but they've done none of those. And after the initial purchase blitz for the guys who want/need these new additions, they'll sit and collect dust on music store cymbal trees everywhere.
Click to expand...

I think you're right on track. At least they brought back the 14" and 15" Heavy hats that many drummers loved, though I prefer the 13". But I'm hoping that somehow all these models sell well. Then maybe they will also start making those others you mentioned. Very doubtful though. Maybe eventually....

Like you said, I would have thought that Paiste would have put out an 18" 602 flat again, since Now He Sings, Now He Sobs, made it the most famous flatride ever. Sabian ended up purposely making one that sounds just like it. It's pretty sad that another competitor cymbal company had to make a cymbal that you made famous. I don't get it.

Edit: Oh! I forgot to say, didn't Paiste reissue the 15" 602 Sound Edge not too long ago and discontinued them because they just weren't selling? I'm sure many drummers would love to get their hands on them but they just can't afford it. Some people need to eat.
Last edited: Jan 10, 2020

These and not the paperthins/thins are on my list to try as jazz rides and put rivets in. AFAIK, 22" medium would be Higgins' main ride.
S

Last thing I heard, 602s are made from German-made B20, very uniform structure, which hadn't been available for a while before they were re-introduced, while the Masters blanks are made the Turkish way. Interestingly these also seem quite consistent.

Glad for any drummer who gets to experience the joy of a pair of hi hats I’ve truly cherished for 35 years. I salute you, 602 heavy hi hat. 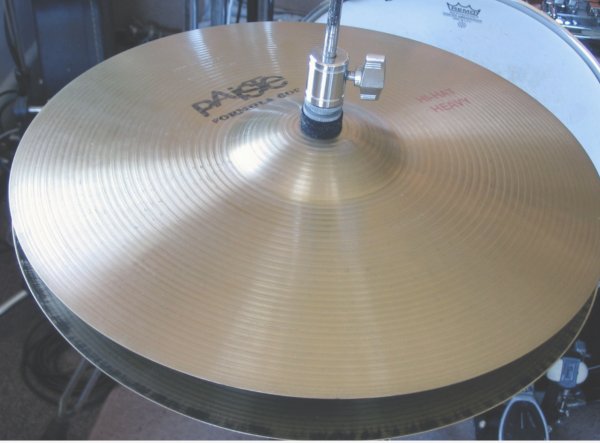 Looking at the new additions in the lineup and then watching the video, it becomes more clear who the target audience is.

Funny, I got the 24" medium ride and 15" medium hats a while back and found that they didn't always have enough cut for me in a Rock situation, compared to 2002's or maybe even A's. Will have to revisit.

Butch1970 said:
Looking at the new additions in the lineup and then watching the video, it becomes more clear who the target audience is.

Funny, I got the 24" medium ride and 15" medium hats a while back and found that they didn't always have enough cut for me in a Rock situation, compared to 2002's or maybe even A's. Will have to revisit.
Click to expand...

602 mediums in a rock situation? Hmmm not for me. The medium hats are great but they are still thin enough to shred sticks efficiently. The heavy hi hat covers it all but you lose the ability to create shimmer effects. I think there are many Paiste hats better for rock than mediums, 15” or not. Sound Edges for a start. YMMV.

Looking forward to picking up a pair of the 15" heavy hats and a 19" thin crash. In my opinion they're missing out on offering the heavy "universal" in a 22". I had a chance to play a 21" blue label heavy recently and could easily see/hear myself enjoying the same weight in a 22" for a slightly lower pitch.

I'm surprised they haven't ventured out to release any splashes or chinas in this line, especially with this large of an expansion. I'm willing to bet splashes in this line would be close to my "perfect" splash (the Signatures have been my favorites ever since they discontinued the Sound Formula, THOSE splashes were amazing).

one side or the other..
Last edited: Wednesday at 1:44 AM

Same place the 22" medium is. On ebay going for $600. Wish they would have gone up to 22" in both these but oh well. So glad they chose to release these cymbals. Not complaining.

(Not to be tacky, but small and shameless plug: I have had a pre-serial 23” HEAVY fer $399 shipped lower 48 for months. Only selling b/c I somehow have 2)