It's been 35 years, but I have a vivid memory of how terrible the Led Zeppelin Live Aid set was. Phil Collins had interesting things to say about his disastrous playing on that day in a recent interview, according to excerpts in the drumming authority, UltimateGuitar.com:

The performance was very much marred by the drummers' lack of rehearsal, Jimmy's out-of-tune guitar, bad monitors, and Plant's hoarse voice. Recalling how the whole thing came to be, Phil said:

"I'd played on Robert Plant's solo records and he said: 'Are you doing this Live Aid thing?' And I said: 'Yeah.' And he said: 'Can you get me on it? [US promoter] Bill Graham doesn't like me and he doesn't like Zeppelin. Maybe you, me and Jimmy can do something?'

"And I said: 'Great, yeah.' And then Sting called me and said: 'Can we do something together?' [UK promoter] Harvey Goldsmith said: 'You can get Concorde and play both.' I said: 'Well, okay, if it can be done.' I didn't think I'd be showing off.

"By the time I got there, me and Robert and Jimmy playing together had become The Second Coming of Led Zeppelin - John Paul Jones was there too. Jimmy says: 'We need to rehearse.' And I said: 'Can't we just go on stage and have a play?'

"So I didn't rehearse when I got there, but I listened to 'Stairway to Heaven' on Concorde. I arrived and went to the caravans, and Robert said: 'Jimmy Page is belligerent.' Page says: 'We've been rehearsing!' And I said: 'I saw your first gig in London, I know the stuff!' He says: 'Alright, how does it go, then?'

"So I sort of... [mimes the 'Stairway to Heaven' drum part], and Page says: 'No, it doesn't! It doesn't go like that!' So I had a word with [co-drummer] Tony Thompson - 'cause I've played as two drummers a lot and it can be a train wreck - and I say: 'Let's stay out of each other's way and play simple.'

"Thompson, rest his soul, had rehearsed for a week, and I'm about to steal his thunder - the famous drummer's arrived! - and he kind of did what he wanted to do. Robert wasn't match-fit. And if I could have walked off, I would have done, 'cause I wasn't needed and I felt like a spare part."

Could he tell it was going badly?

"Yeah, frankly. But we'd all have been talking for 30 years about why I walked off stage if I'd done it, so I stayed there. Anyway, we came off, and we got interviewed by MTV. And Robert is a diamond, but when those guys get together a black cloud appears.

"Then Page says: 'One drummer was halfway across the Atlantic and didn't know the stuff.' And I got pissed off. Maybe I didn't know it as well as he'd like me to have done, but... I became the flagship, and it looked like I was showing off." 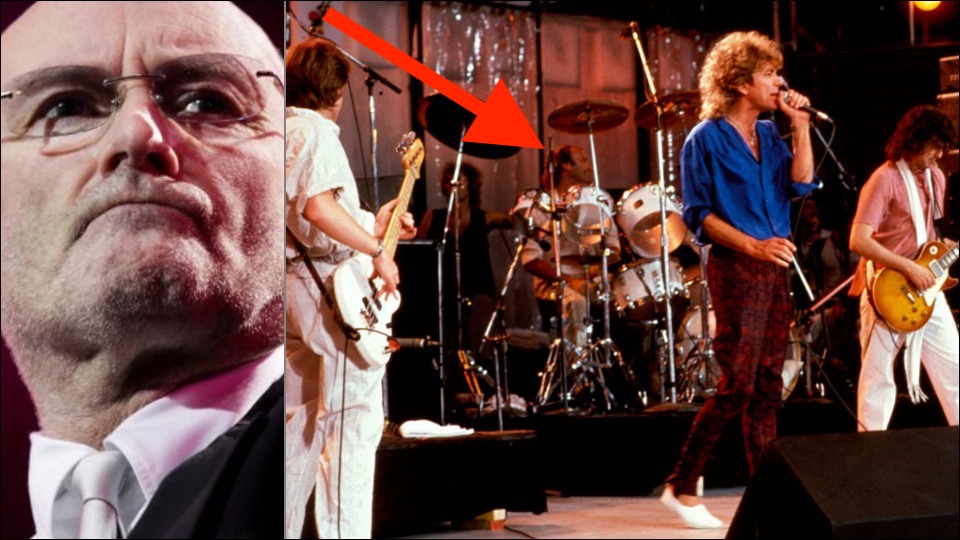 The drummer says he wanted to walk off from the show.

Is it this show? This does not seem bad to me.
P

I was a teenage drummer at the time and was home all day to see Live Aid. I was also a fan of both Tony Thompson and Phil Collins (as drummers) and it was obvious that Tony Thompson (RIP) was carrying it.

He seemed pretty calm and upbeat to me....others would have done it differently of course. He's not John. Phil had his own thing and I thought his playing in Genesis was great when Peter was out front...and Brand X.

I think it was horrible, and I'm not at all surprised an article like this came out. Plant sounded bad; Page sounded worse.

Is it this show? This does not seem bad to me.
Click to expand...

Are you listening to the same vocals I am?

Just by coincidence I was digging into this topic last night and came across the following interview with Jimmy Page. He begins discussing the Live Aid debacle beginning at the 6:57 mark.

Bandit said:
Are you listening to the same vocals I am?
Click to expand...

wow ... there are legion bands around here hipper'n than that . Collins was the wrong guy iin the wrong place at the wrong time with the wrong people .
Last edited: Jan 25, 2020

I’m to young for Zeppelins hay day but my parents were not so I know there recorded music well. I also smoked my fair share of grass when I was young so I know every second of Stairway and that was not good stoned or sober.

I feel bad mostly for Tony Thomspon - a truly great drummer. I'm a bit suspicious of Collins' memory. At the time, he certainly seemed to love the attention of needing to fly on the Concorde to do both gigs. It would've been so much better had he not played. Collins was the worst one on stage in that set. There was a quote from Thompson about it that I don't remember. But, he was very unhappy about the whole thing.

ANYBODY talking about the drums (or the bass for that matter) in that performance is not only tone-deaf, but brain dead.

Page and Plant should be ashamed that video of that performance even exists...

Phil *should* have walked off.
M

I read in MD that Tony Thompson's inspiration to drum was Zep and he had it all down for the concert and was very disappointed by Phil being there. That makes Page's blaming it on the 'drummahs" a not true call. '
Phil said "Tony, rest his soul, had rehearsed for a week"
Last edited: Jan 24, 2020

moodman said:
I read in MD that Tony Thompson's inspiration to drum was Zep and he had it all down for the concert and was very disappointed by Phil being there.
Click to expand...

That's it. I remember reading an interview in Modern Drummer.

That definitely wasn’t a great performance. But there are worse ones on YouTube from the 70’s where Plant can’t sing or remember the lyrics, and Page fumbles throughout the songs.

not like they were trying to be London philharmonic

I think we are being a bit too harsh here, its a big charity event, not anyones show, limited time....and lots of unknowns.
Given that, I thought it was fine, saw the whole thing live. Hey its a party for a good cause etc..."check your egos at the door"
was the vibe. One thing is for sure John Bonham drove that band.....and they were spoiled...when he wasn't there.

My hat is off to Robert Plant when he said...."Led Zeppelin died the day John Bonham died.

ANYBODY talking about the drums (or the bass for that matter) in that performance is not only tone-deaf, but brain dead.

Page and Plant should be ashamed that video of that performance even exists...

Many people think he should have never been there in the first place.

If you watch the Bonzo Bashes then you know how hard it is for even the worlds great rock drummers to replicate/mimic John Bonham’s sound and feel.

Lots of very good drummers sit on that throne and 10 seconds into I am already cringing.

I saw Page and Plant when they toured together, I don’t know; 20 years ago and they had Michael Lee on drums and he just killed it. You could have closed your eyes and pretended Bonham was playing.

I also think that Steve Gorman did a hell of a job covering Bonham on the Live at the Greek recordings.

dale w miller said:
Many people think he should have never been there in the first

dale w miller said:
Many people think he should have never been there in the first place.
Click to expand...

I wonder what would have happened
If he had walked out? Yikes!!

it’s just one song for a charitable festival...
Click to expand...

It was 1985, Phil Collins ruled the charts, everybody wanted to play with him on a record or live, and he always kindly obliged. Poor fellow...he flew across an ocean to do so, and people still taking the p*ss on him 35 years later.
You must log in or register to reply here.

N
Why I switched to Vater 5A's