Ping Ride - Which One Should I Try First?

Finally received my ping rides. Which one should I try first. Decisions, decisions… 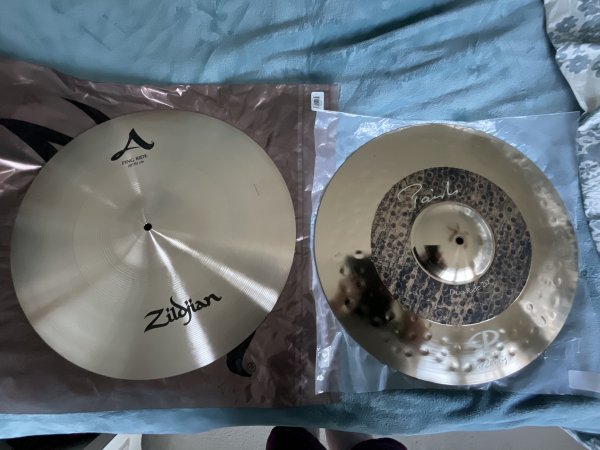 Left one
I'd have a chance.

I vote for the Zildjian!

I have a 22” Z from around ‘82 that I played for years. Great cymbal that I always thought was quite versatile. YMMV

Well, I'd like you to give that Paiste a go first and share a review before moving on to the Z.
Paiste makes a designated Ping Ride? I told you guys I don't get out of the County often.
It's a looker for sure.

That A looks like a redesign and is way thinner than an older A. I have one and it's crashable! The Paiste looks awfully intriguing and gorgeous to boot.

The Paiste is a Carl Palmer signature, which I always thought was based off the Full Ride, but too lazy to look it up right now.

Try the Zildjian first... that way you can list it for sale sooner and keep the Paiste.

WLVN said:
Try the Zildjian first... that way you can list it for sale sooner and keep the Paiste.
Click to expand...

Lol, that is pretty hilarious. I’m gonna keep both i think. I have a full set of A’s already so the Z Ping Ride will compliment the others nicely.

Now for the comparison:

The Z has slightly more overtone and wash to it compared to the Paiste. The Paiste is heavier and has a much more pronounced ping with a subtle wash that gradually builds as you ride it on the polished section. On the unlathed section the ping is slightly less bright, with less build in the overtones with the tip of the stick. They are both crashable and neither are gongy, if that makes sense. The overtone volume of the Paiste quiets down faster than the Zildjian after a crash and the bell is quite a bit louder as well. They both have a long sustain, but I think the Zildjian carries longer in the mid and low frequencies.

I am going to pair these up with my Sweet Ride in the traditional position and either of these two just over the hats. I am ambidextrous so I play open handed and the ping makes more sense for me on the left.

Maybe the use case for these two is the Paiste for live and the Z Ping Ride for recording to match the tone of my other A’s.

Thanks for everyone’s feedback. I am done buying cymbals for now. Haha.
A

LAViking said:
Finally received my ping rides. Which one should I try first. Decisions, decisions…

Palmer used the discontinued Sig. heavy bell ride for years.
This one has the look of the heavy bell and dry dark rides.
I said I was done buying cymbals but, I have to have one of these! Wish it was a 21 or 22"

To truly appreciate these you really need to hear them from a distance and hearing them in the context of the full band makes a difference as well.

What alloy is the Paiste;
Signature B15

Yes, the Paiste is made of the “Signature Alloy”.
D

Obviously, because, as everyone knows, and advertising leads me to believe, it's "the only serious choice."
.
.