Played my first live drum "gig" in many years today.

I've been playing keys in a church band for the past two or three years, which has been an invaluable musical experience. Playing another instrument, and performing live with it: Highly recommenced. This church has never had drums in its entire history, but a space renovation due to flood damage (Texas freeze), and another piano player coming in created an opportunity to have drums. Have to admit, I've become dead cold calm on piano...but I was a bit nervous on drums! It actually went really well. As it turns out, I was a bit loud. . I ended up playing louder than we rehearsed because my ear told me it could be louder with the mix in the room. I was (mistakenly) surprised at how much I louder I could play and "get away" with...but...we all have our opinions. Easy adjustment for next time. No drum cage of shame.

Congrats bro, enjoy being back in the saddle!

Best I could do from this time. 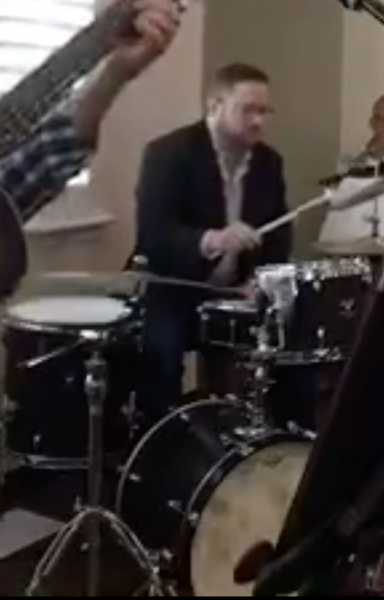 Doing a soft cymbal swell here. I'm happy with the look of this in this space. The smaller drums are definitely less "intrusive" looking. I finished it really dark with a satin top coat, which really sets off the chrome and looks good in such a brightly lit room. I had no idea I'd ever use this kit for a situation like this. I put it together to try my hand at re-finishing and to practice jazz on it at home, but I'm glad I had it.
Last edited: May 10, 2021

Congratulations! ....and keep it going!

awesome to have you back on the cans again! Great story and sweet kit!! I am using an older Catalina bop kit in the same context so I can appreciate your observations and agree wholeheartedly!
You must log in or register to reply here.

Live From My Drum Room With Rich Mangicaro!

Today at 1:36 AM
John DeChristopher