When I first started messing with music at age ten I played bass and drums, thanks to a neighbor who taught me the basics on both. My parents bought me a bass at GC Murphy 5 and 10 as drums were too expensive, loud etc...

I continued to play my neighbor's drums. A couple of years later I had a friend who had an old set of drums, I traded my Telestar bass and used (very used) Silvertone amp for his beaten Del Ray drums. I never looked back.

A few years ago I was in a pawn shop picking up a used snare and spotted a 1980's Jackson bass that was sort of cool. I took it off of the wall and could pretty much play the same stuff as I could nearly 40 years before. I negotiated with my friend and picked it up for $125 with a hardshell case which I thought was fair.

Admittedly, we were getting ready to move and I didn't mess with it as much as I had intended.

Earlier this year I pulled it out of it's case and started playing again. I picked up a Peavey TNT 160 amp off of craigslist and I've been messing with my bass for about six months now figuring things out on my own. I watch videos on youtube, I watch different bass players in clubs and of course different bassists that I've been playing with. I think I've gone about as far as I can on my own.

So, I signed up for formal lessons at a guitar shop about a mile from here. I'm enjoying learning new things and I think that it will make me a better drummer.

(And of course then I'll get to collect basses...) 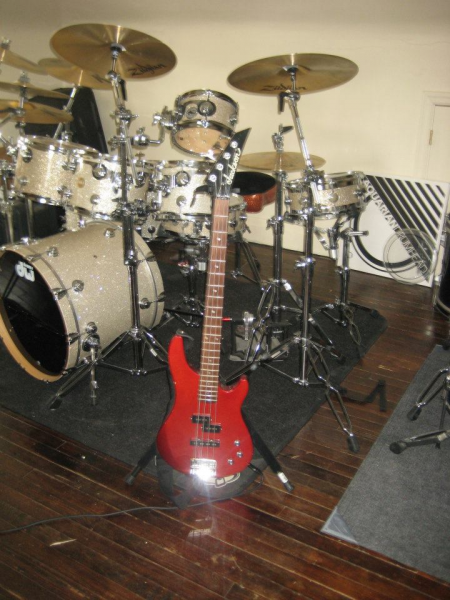 
If you had equal ability of each of the instrument in a band, and wanted to get into your idea of a successful band and had more choices of types of music to play, the bass will get you the furthest the quickest.

You have a point.

There seem to be a lot of opportunities to play bass in this town and not a lot of bassists.

I'm already looking at another bass...

The Rogue Beatle bass is darn well made for the money. Small scale with average electronics though. I like mine. Ace
B

rhythmace said:
The Rogue Beatle bass is darn well made for the money. Small scale with average electronics though. I like mine. Ace
Click to expand...

Another vote for the Rogue, rhythmace. This is me with my grandson Julian "playing" my Strat. He had his own kid-sized off-brand guitar, but has abandoned it for the drums. (Mentioned in another thread).

I ended up picking up a Peavey Dyna bass, made in the US.

I now have Bass and guitar gas, although I'm staying a lot lower on the food chain than with my drums.

Which I run through a Peavey TNT 160.

The Jackson is okay, but it never played that great. I ran across this USA made Peavey Dyns bass. It's a huge step up.

My bass playing is really coming along. I've decided to jump into guitar lessons now. I was so happy with the Peavey bass and amp, a USA made Peavey guitar joined the family. It's a Predator, made in the US. The amp is a Peavey Bandit.

It's okay if you all shake you heads and laugh.

That Dyna is an awesome bass. I drooled over those as a kid in High School. All I could afford though was a Peavey Foundation S. Had a split neck p'up and standard bridge; kind of a P/J configuration. Also on the "S" model the headstock was matched to the body. I recently sold my Music Man Stingray and am again looking for a cheap Peavey. I miss mine!!!

Last night it just suddenly clicked. Last night and today I've been playing and it has just become easier to make what I want to hear happen. My left hand is becoming comfortable all over the neck. It's like I was hit by the bass player lightning bolt or something.

How's the skin on your fingertips.

I'm in the process of buying another bass amp stack. I gave my Hartke and Avatar stack to our son Peter. Hence all the questions about Carvin and Ashdown. I'm just not an Ampeg fan. Their solid states are just higher priced or their expensive tubes need to be replaced often.

Good luck on the bass. It's my second instrument as well.

Not feeling my fingertips the way I used to is weird. I play hand percussion in two bands and now bass in one. It's odd that I'm not playing drums, my primary instrument with anyone.

I picked up a Peavey Fury (USA made Precision clone) and a new better bass amp since I am actually playing bass in a band now. The amp is a Fender Bassman 400 over a Peavey TVX 210 cabinet.

I'm having fun with it.

drummer5359 said:
I now have Bass and guitar gas, although I'm staying a lot lower on the food chain than with my drums.

It's okay if you all shake you heads and laugh.
Click to expand...

How do you like that TNT? I got back into bass recently, but I need something bigger than the Minx practice amp I have.

drummer5359 said:
I now have Bass and guitar gas, although I'm staying a lot lower on the food chain than with my drums.

It's okay if you all shake you heads and laugh.
Click to expand...

How do you like that TNT? I got back into bass recently, but I need something bigger than the Minx practice amp I have.
Click to expand...

I had a TNT 130 that was fantastic. Bought it new and ended up selling it about 7 years ago as I wasn't playing bass any longer and had a big move coming, but I'd buy another one.... They usually aren't too expensive either.

First of all, the TNT is a workhorse and mine is still going strong. I was able to upgrade from it though.


It's been a year and a half since I've "gotten serious" about bass and I've come a LOOOONG way on the instrument.

I've also discovered that bass gas is as bad as drum gas...

Since I've last posted I sent the Jackson bass to California so that my niece there can learn bass too.

I sold the Dyna and the Peavey 210 cabinet as well.

But I upgraded a bit.

I bought a Fender Bassman 115 cab to match my Bassman 400 head, a brand new Fender 60th Anniversary Precision and a 1972 Telecaster bass.

Congrats! Great set-ups, I love Fender Basses....I just last week decided to start playing bass again(I was never really any good, but I loved it)..I just picked up a Warwick Thumb NT yesterday. Should be here in a couple of days. Now the hunt for an old Ampeg

Nice basses man! I like playing on occasion but I'm a guitarist first.

I just added an American Standard Jazz bass to my bass family. I but a black pickguard on it so that it fits in with my others.

Started on bass when I started on drums 1961, love both instruments! I have a USA/P-Bass for sale now (200

because I haven't picked it up and refuse to lay it under the bed! All things stop in life eventually, playing bass has helped my drumming and the relationship that a bassists and drummer should have to develop a great pocket and groove together! (nothing like a P or J Fender) Doc

rhythmace said:
The Rogue Beatle bass is darn well made for the money. Small scale with average electronics though. I like mine. Ace
Click to expand...

i disagree. the jay turser beatle bass is by far the best for the money. the rougue ones are a bit cheaply made, crappier wood, more spotty electronics..

the JT is a perfectly fine instrument that can be had on ebay for $200 or so.. if anyone uses a beatle bass i highly recommend the labella beatlebass flats.. they're perfect. they dont call em beatlebass strings for nothin, i guess.

I picked up a "stunt bass". In other words, a good playing bass that I'll gladly take into any dive bar. It's a 1989 MIJ FEnder Precision. I've already ordered a black pickguard and chrome knobs so that it will fit in with the rest of my bass family.

Today at 4:49 AM
Mackermanesq
M