I guess you have Mike, holy cow!

Thanks Bill, you really do need to stop by.

I used to have a '67 Gibson SG single pickup bass that was really great. Every bass player who tried it wouldn't put it down. It was a beater but had consistent, clean tone, and was perfect for recording. I had a Peavey 100 watt bass combo amp with a 300 watt JBL cast frame speaker that I put in there myself, and used it all the time for my "bass fantasies." Too bad it was all destroyed in a house fire in 2001. I also had another bass there for a while, it was a cheapo GC special that I gave away to my "best friend" who then died. His family won't return it. Oh well! Thank goodness I don't have any trouble holding onto drums and cymbals. Looks like you've got yourself an exceptional collection of basses there, 5359, among other string-related gear. Very nice. And you really seem to have found your ability, and your style. Bass players, like keyboardists, are always in big demand. Rock ON, bro!

So... I love Precisions. But, I really wanted to have a nice American Jazz bass in the stable. I picked up a nice Charcoal Frost American Standard Jazz a few years ago. I liked it and likely would have hung onto it forever. But, an American 60th Anniversary Precision became available for a great price and I just had to sell the Jazz to fund that P.

In the back of my mind I knew that someday when the time was right I'd add another Jazz bass into the mix. Today the planets aligned and I'm a Jazz bass owner again.

This one is a 2001 natural Ash American Jazz bass with a maple neck.

And here is my latest bass family photo...

More importantly, I have a lot more confidence on the bass than I did even only a few months ago. It feels very natural these days.

Here's my most recent bass purchase - an LTD Surveyor 415. Bought it from Musician's Friend on blowout for about as much as the pickups in it would cost... sound-wise, this thing kills most of the $2000+ basses I've owned in the past. Like it so much that I sold my Ibanez BTB 1305 (also pictured), that cost 4 times as much. Also included is the USA Peavey Accelerator Plus bass I recently got rid of. AWESOME bass, but I ended up buying a USA Peavey Fury for next to nothing, which came with EMGs in it, and overall liked its tone just a little better...

I'm not much of a bass player, but I own a Fender Jazz mim, and an Eden 210 combo. Great setups!

Here is my latest toy, a 2012 Fender American Select Precision. I fitted with a black pickguard as I have with my other basses. 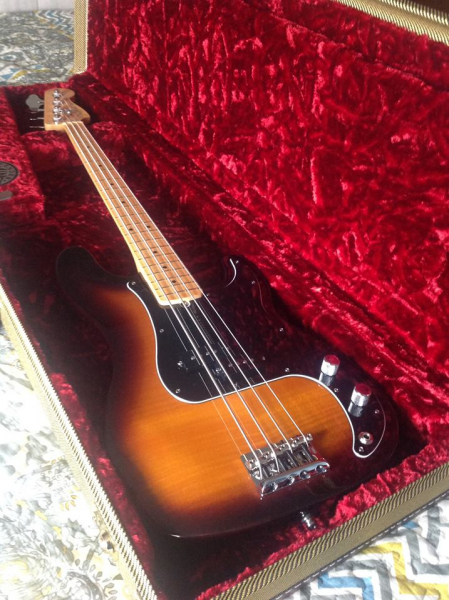 Here is a picture of the neck. 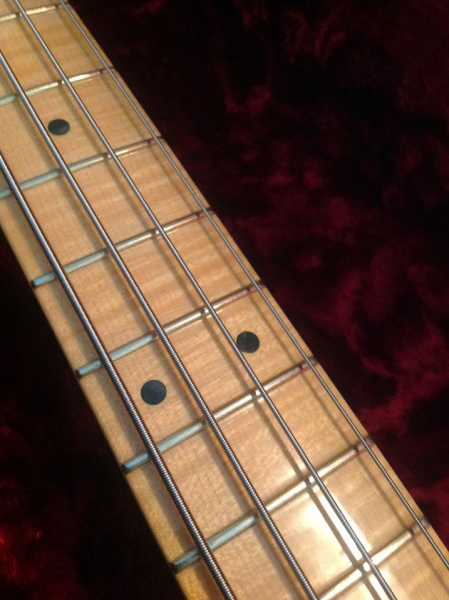 I am in the middle of a bass build using all genuine Fender USA parts. I'll post photos of it when it is done.

The scary thing is that the addition of this bass brings the total of American Fenders that I own to six.

Yikes! How did this happen?

I got another bass, so I thought that I'd dust off this thread. Actually, I put together a bass from parts because it's the only way that I could get exactly what I wanted.

Two months or so ago the American Standard Jaguar bass was released by Fender and I fell in love with it. But I was disappointed that there was not a version with a maple fingerboard available as there is on the other American Standard basses.

Shortly after that I bought an American Select Precision, I love the neck on that bass. I really wished that a similar neck was available on an American Jag. It took a while for my crazy plan to take shape.

I ordered the neck first and then the body. When the body came in I removed the tort guard and sent it off to Pickguardian to be duplicated in black/white/black material. The last of the pieces came in the other day. I put it all together then I dropped it off with Scott at Pittsburgh guitars so that he could really optimize the setup. (Of course I had flats installed at that time.)

I just picked it up. What a cool freaking bass!

The balance is great, no neck dive at all. It has a ton of different sounds available, it will take a bit to sort them all out.

The flame maple neck is stunning to my eyes.

I'm sort of partial to sunburst finishes with black pickguards and maple fingerboards.

I am primarily a bass player, learning drums. Musicman, all the way. Pretty versitile. P-basses are my favorite for rock.

Rock and blues are my thing, P-basses do it well. When I need more edge I have the Stingray.

I gigged as a bassist this weekend and it went well, in fact, it felt good!

Here's a cab I just built.

As you know, Bass cabs are a science while guitar cabs are all about the driver. This design is from GreenBoy. a well know sound engineer who offers these plans free. Amazing cab that you can build for around $450 that will stand up to the top dollar boutique cabs costing $2K any day

That Fearful is very cool, I definitely considered one.

I honestly don't trust myself with power tools since my strokes. I might get a Fearless built down the road, for now I picked up an Ampeg SVT 212 AV. It's working well with my SVT 3 Pro.

cked up a couple of more basses, all Fenders. The black pick guard for the one in the back is on order.

Here is a couple of photos of my basses as of today.

And here are my bursts...

That Ric is beautiful!

I've been put into the bass spot recently at church. Found a Schecter 6 string on Craigslist and I'm enjoying it. But then I've been a guitar player for most of my life.

I love Jazz basses too but this one really does it all for me. These are great all around workhorse basses.- IMHO
My 2010 Fender USA Precision Deluxe passive/active electronics and it still plays and looks new.