With my post no. 100 it's really time to say 'hello' to all of you. And I wanted to shortly introduce myself:

I already liked drums as child, and started in my youth. At around 16, I got my first drum kit and was drumming a year later in local bands, what I'm basically doing until now, in my 50s. Of course, the circle of my 'local bands' got larger with time, playing across whole Germany (where I live) and neighboring countries. But I never got a 'professional', as I was earning my living elsewhere, and kept drumming as hobby. In my opinion, the best hobby one can have. In recent years, I tried to broaden my view on drumming, drums and cymbals, with this fantastic aid of 'internet communities', and was reading as guest this and other forums. A few months ago, I decided to join, to learn more (and keep my English fresh).

As most of you are interested in gear and pictures thereof, here we go:

First drum kit was a 'cheap' Made in Japan 'Trak drum system' in black. Somehow OK for a beginner, but not more. Later, I donated that kit to a local Jazz club, where it still exists (as far as I know). No images.

Second drum kit (and first 'real kit') was a Sonor Prototype. A white Phonic Plus, but not beech, it had popular shells. With that Prototype, Sonor tested outside their factory what later became the 'Force 2000' series. Sound was good, not easy to tune, but lots of power if played hard, quadratic shells (which didn't make it in production, as fashion changed). No images. At first view, it was indistinguishable from a Phonic Plus, and I guess most of you know how that looks like.

Then, I had to sell it. It's the only kit I ever sold. But I had the chance to get my 'dream kit' and needed cash. Later, I thought about getting it back, but the guy who bought it, will only give it away from his cold hands (his wording). And I think he still got it, but our contact broke down.

Since the first time I played on a DW, I had to get one. In the late 80s, they were brand new on the European market, and their sound was an 'eye-opener', and 'ear-opener' as well. Unfortunately also an 'wallet-opener', and prices ran up until then. Looking for information on these 'early DWs' with Keller shells, I ran into this forum some months ago. And I had to learn, they are already 'vintage' now. (Shock - am I vintage now as well? Yes, of course). For me, it's still one of the best 'modern sounds' acoustic drums could deliver.

Here are images from yesterday: 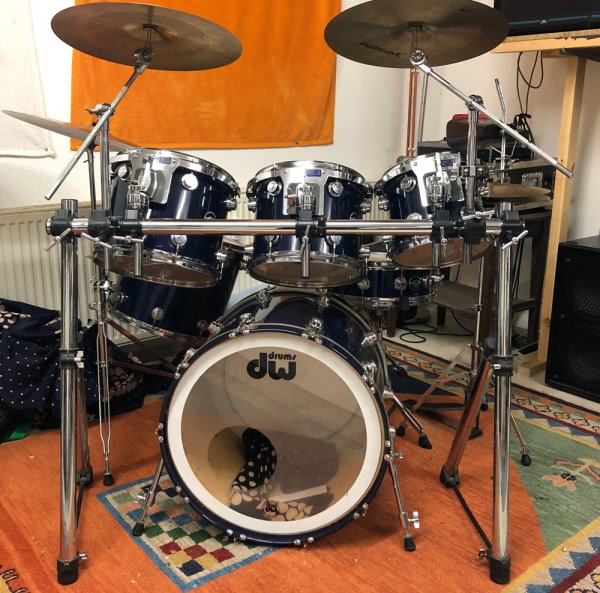 In the 90s, this was the most expensive thing that I owned (far outnumbering my car) and I was keeping an eye to it every time. And one night, it happened. We played an open-air. There was a roof above the stage. Heavy rain came down, a big water bubble collected in this tent-like roof just above my drums. It looked dangerous, then it cracked, and all the water was falling down - right on to and into my kit. In this very moment, I decided not to play it live anymore. This decision lasted (with very few exceptions) until now. Because of that, I have an absolutely luxurious rehearsal kit with a giant sound.

But, in the old days, I had to get something for the stage. An used one, or an old kit, where scratches don't matter. And I found one, from an brand I had hardly heard before. A Hayman Vibrasonic in midnight blue. It was cheap (in the 90s anyway). And with old heads it sounded already good. With new heads and tuned well, it sounded bombastic. Couldn't believe it. And I couldn't resist to put a 'DW' bass reso head on. More than once, drummers were coming to our stage after the show and praised the sound of these 'DWs'. With a smile I said "Yes, my DWs sound great ..... - as well." 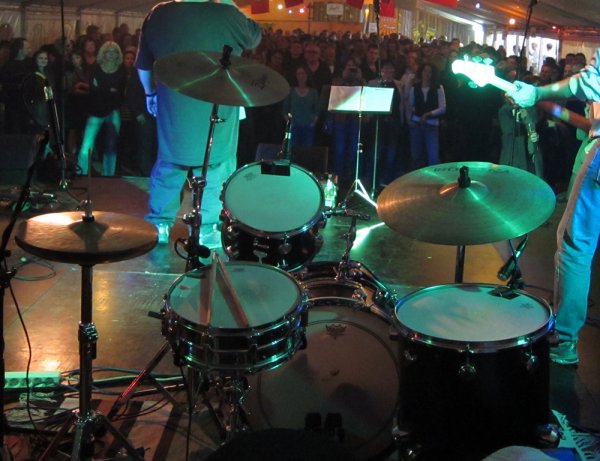 OK, just realized, I have to get better images of them. These are more 'tools' than anything else to me, my 'go-to' drum kit for most ocations.

When I bought these Hayman drums, they were mostly 'old drums' nobody cared about, turning already into 'vintage'. The sound was/is just great for Rock, Rhythm'n'Blues and many other styles. This changed my taste and my view on drum gear.


Not much later, I had the opportunity to get an old Ludwig (without a clue what this means). Still in the 90s, they were quite cheap, there was no 'retro hype' yet. And they were older than me. It took me some time to get them sounding like I wanted them. Around the 2000s, I played in a 'Deep Purple tribute band' and couldn't have dreamed of better sounding drums than these (OK, the 26 inch bass drum would have been perfect, but no way to get one). And I play them live until today at certain events. And very recently in the studio. The engineer was more than happy with the sound. Hope it pays out in the final mix. Much more important is to say "thank you" to all the great members here, where I learned a lot and hope to learn even more in future. And I got a lot of inspiration with the posted stuff and videos. One day, I might even give some meaningful comments here.

Final picture of myself last weekend (faking a studio worker): 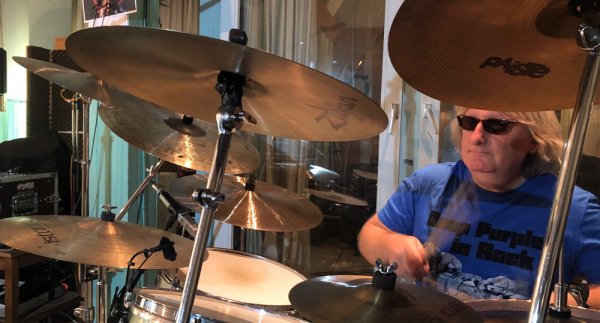 Congrats and a belated welcome. Lovin’ your kits!

Welcome! Great drums you have there.

Wow. I've been here since 2013 and never introduced myself. Maybe I should.
Nice pics! Welcome to the forum!
H

Enjoyed the introduction post and your perspective on your drums.
T

Just wanted to thank all of you for the warm welcome to the forum. One of the better 'internet places' to be.
You must log in or register to reply here.