Just put the finishing touches on my Burgundy Sparkle "project" set. Downbeat sized drums (12/14/20). I just got the batter head for the bass drum today after finishing the bass drum hoops over the weekend and slapped it all together after work. Such a nice day I decided to get in a photo shoot before the sun went down (it's that time of year where you never know how many nice days remain). So I grabbed some handy hardware and a snare and set them up in the front yard.

Bass drum is an original finish Burgundy Sparkle. It was purchased as a shell on ebay. Just the wrap and the badge with all the hardware removed. I believe the seller had tried to sell it as a complete drum a couple of times and then stripped off the hardware to sell separately. I threw an $86 "marker" bid on it at the beginning of the auction and ended up as the only bidder. Shipping was high but it was still less than $150 which I though was fair for a shell in that wrap. 4 small extra holes from the rail being moved to a lefty setup at some point. Wrap and shell both in excellent shape. I had all the parts to put it back together except for the bass drum hoops. These are new ones from Drum Factory Direct.

14x14 is a ground up creation using a new 3 ply shell from Bernie Stone and custom wrap from Precision. The inside is painted white and I'm not sure the casual observer would know it wasn't made by Ludwig although a serious collector could probably tell pretty easily. 14x14 is a size I really like but generally expensive to acquire, especially in a harder to find color. My initial plan was to create just a Burgundy floor tom to use with my original Burgundy Sparkle Super Classic set (13/16/22) but then that bass drum shell fell into my lap.

8x12 is a vintage drum I recently bought from a friend. It was originally Oyster Blue but the wrap was completely trashed and he sold it to me very cheaply. I had enough leftover wrap to do either a small tom or a snare. When I got a great deal on the tom I opted to go that way, wanting the toms to match in color. I actually have an original 8x12 in Burgundy, although it seems to be "lost" at the moment. It was somewhat beat up anyway so I think I'm preferring having a drum specific for this set. I have used the other 12 in place of the 13" with the Super Classic set.

The wrap for these came from Precision and is a custom color. It's a bit lighter than the original. The difference looks a bit more pronounced in the pictures than it does to the eye and in a darkened situation like a stage they look the same more or less. It is much closer than Merlot Sparkle (I have a snare I rewrapped in that). It's maybe a half shade "pinker" than the original but still has that "is it purple or brown?" look to it depending on the light which most of the modern Burgundy wraps seem to lack. I'm not sure if the next color up on the pantone chart would have been better, or maybe too dark. There may have been a bit of miscommunication involved too, but I'm satisfied.

All told it was $225 for one sheet so you do want to get it right. Drum Supply sells a wrap that they say is the correct wrap for 60's Ludwig Burgundy and it was my intention to get that but they did not reply to my numerous requests for additional information (emails, website info requests, and phone calls). Further investigation with a contact at Delmar and conversations with Precision indicated that Andy was not having a special wrap made but was using something chosen off the Pantone chart. He sells two varieties and states that the Gretsch version is darker. There are really only two colors on the chart that look like Burgundy and if the Gretsch is the Darker one then this SHOULD be the same wrap he sells for Ludwig...but who knows. Precision can order the same custom wraps off the same charts so I went with them. Initially they said it might be several months before Delmar would make the wrap but I lucked out and they did it right away. 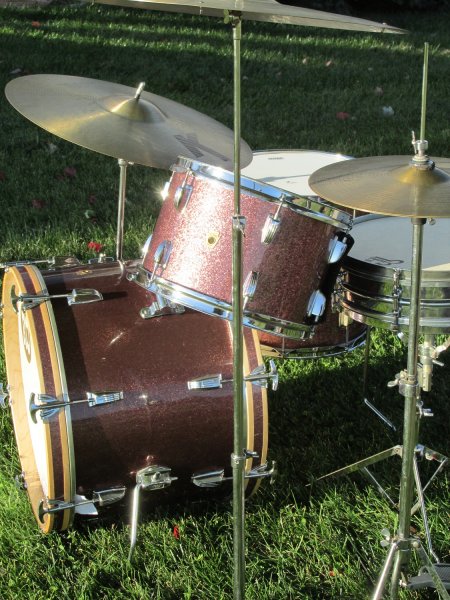 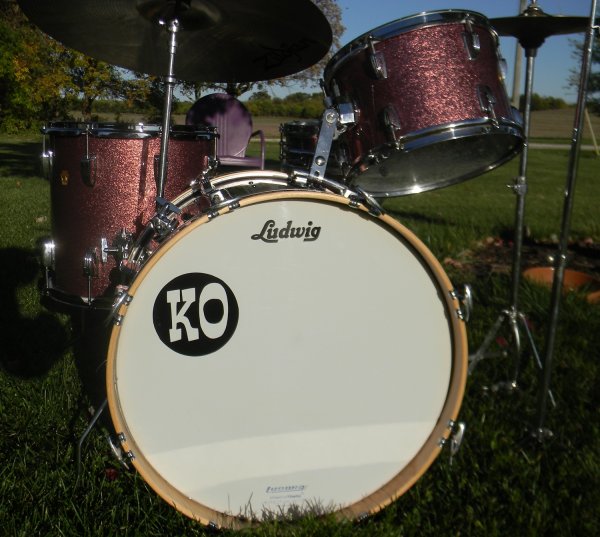 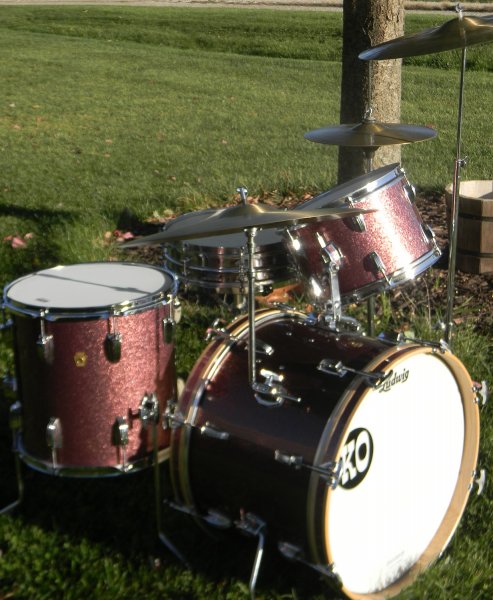 Anyway, another project finished up and yet another set in the stable for all those gigs that have dried up in this stupendous year.

Ludwig had a "Burgundy Mist" snare drum on their sales table at the last Chicago Drum Show (2019). As I recall it looked pretty good. Now I wish I had snagged it. It would have been nice for this set. Maybe in 2021...if there is a show next year. 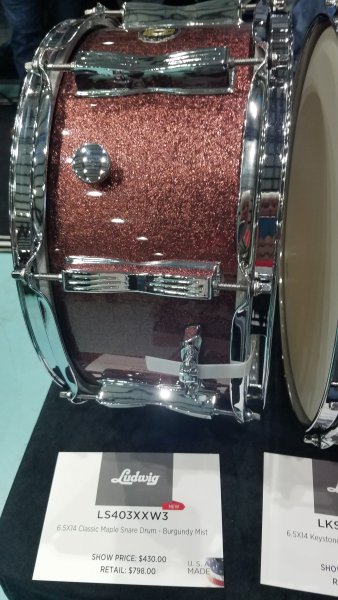 K.O! They look great! And, you gotta love the Swivo cymbal arm!

One of my favorite colors. Very nice

They turned out great!
B

Wow! Great job on that kit, it looks amazing!

Looks great, KO!
You must log in or register to reply here.