hello,
here are a photos of Emry Thomas
he's playing a Ludwig set with classic lugs and a Standard wrap (the Ludwig "satin flame" Astro wrap was on Standard series only).
the badge seems to be missing.

is possible a Ludwig Standard set with CLASSIC LUGS? 8 lugs for 20 bass drums and 10 for 22 bass drums?
if yes, WHEN? never seen in 60's 70's catalogs 70's
and what interiors? white or granitone?

I've heard that Ludwig would put whatever lugs they had on hand on the Standards. They preferred to use the Standard lugs, but if they were out of them they used Classics.
S

Not sure but if I came across a sweet set of Standards, I would swap lugs out for the classics.....
S

ok, you would swap

I've seen Standard drums with Classic lugs. I can't verify they came that way new, but I'm betting they did.

That doesn't look like the Ludwig Standard Astro wrap. The Asto had more lines and was curvier if that makes any sense.

Vintage Ludwig Standard 5pc shell pack in players condition. 12, 13, 16, 22, with matching snare. Gold Astro wrap has scuffs and scratches throughout. The wrap on the floor tom has a repaired crack near the seam. Shells are in great shape with no extra holes. Some of the wingnuts on mounts are not o

I owned a Ludwig Standard kit in Blue Strata with classic lugs (which also had white interior paint) and I've seen 2 other kits with classic lugs. I'm betting they all came from the factory that way. Ludwig would do whatever it took to get product out the door. No Standard lugs in stock, just slap Classic lugs on the kit and ship it out.
S

good! what year?
this way we could say "the year .... standard lugs were terminated (so Standard sets were sold out???) and Ludwig mounted classig lugs...

These look like 1966-67-ish Ludwig drums in a Hollywood configuration. I can see the classic mounts on the toms and the double tom mount is the version around from about 1965-1967-early 68. Ludwig never offered a satin flame wrap option on anything but standards but it does make me wonder if this was somehow done as a one off. Would be interesting to know more about these drums.


*edit* I'm looking closer again and I see that the 13" tom is a left side tom as the muffler (which is a ball bat muffler) is facing the audience when mounted as second tom.
Last edited: Dec 24, 2020

I just searched him and saw that the picture you posted is from 1976. That cymbal stands show that as those were not around in the 60's. I can also see a crooked keystone badge on the tom. I'm guessing this was re-wrapped in the 70's. 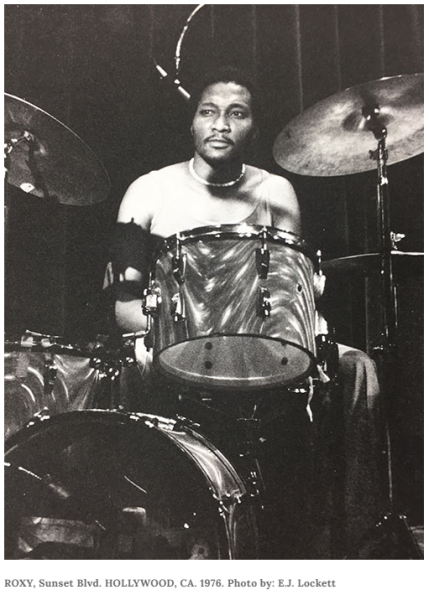 My guess is that that is a regular set of Ludwigs that was rewrapped. Probably a "Hollywood" set (with one tom left off in one of the pictures). The satin style wraps were available at that time from outfits like Precision and it would not be impossible for someone to decide they wanted their drums in that finish. As mentioned above by Rich K. that doesn't look like Ludwig's version of satin flames they were using on the Standard line anyhow. The tom holder design and the spurs would date the set to sometime before the late 60's while the cymbal stands he's using in the first picture do date to the very late 60's so the set probably had a few years on it at the time of the picture, ample time to have been rewrapped for whatever reason. The missing bottom heads might imply that the photo was taken even later like the mid 1970s. I'd guess, based on the details that a color picture would show those drums to have Resocoat (white) interiors. 8 lugs on the bass =20"or smaller 10 lugs= 22" or larger. Also the Standard 12 and 13" toms both used the same sized lugs, the Classics in those sizes did not. You could not easily replace the lugs on both toms with classics because the holes on one of the drums would not line up with the two different sized lugs as shown in this picture. 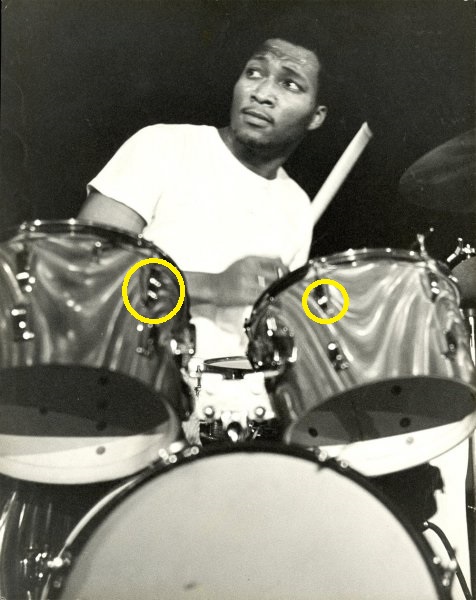 The details of this set all line up with them being rewrapped Classics rather than re-lugged Standards. The spurs and tom holder are not ones generally used on the Standard line and are older parts than would have turned up on a Standard set made in '68 or thereafter. Ludwig did ship out Standard sets that had classic lugs but this was not their usual practice and mostly seems to have happened near the end of the run for the Standards (1972-73) when they may have run out of the Standard lugs and didn't want to order another run but still had orders to fill.

Either way, in all aspects critical to the sound the drums produce, the Standards and the Classics were equivalent, sharing the same shells, hoops, edges, etc. 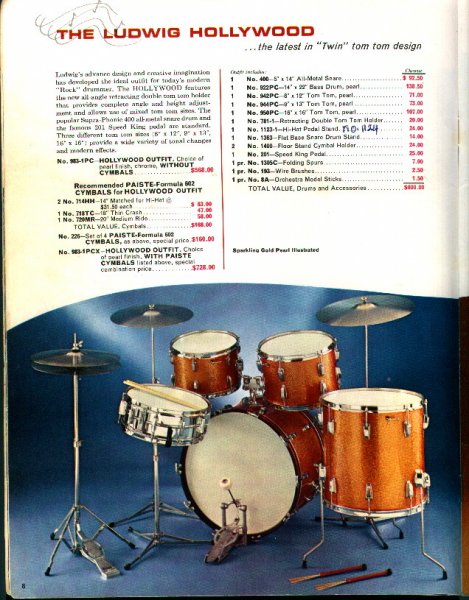 very very interesting! thanks.
so at the final it is a rewrapped set (maybe by Precision - was it the only to offer wraps and work?)?
12 13 16 20 from the 60's... what set that configuration model? if everything was from the same set

anyway was there evidence of others Standards fitted with classic lugs?
Last edited: Dec 25, 2020

stopsign70 said:
very very interesting! thanks.
so at the final it is a rewrapped set (maybe by Precision - was it the only to offer wraps and work?)?
12 13 16 20 from the 60's... what set that configuration model? if everything was from the same set

anyway was there evidence of others Standards fitted with classic lugs?
Click to expand...

Yes, as I mentioned there were Standards shipped with Classic lugs but that does not seem to be the case here, All the various details point to that being a rewrapped set of Classics, almost certainly a Hollywood outfit like in the 67 catalog page I posted.

Precision started offering do-it-yourself rewrap supplies in the early 1960s. I'm not sure if they were willing to do the work at that time. Thomas may well have rewrapped these himself for whatever reason. My main point being that the Satin Flame wraps were readily available for that purpose at that time. There may have been other sources besides but Precision was definitely in business before that set was made.
S

I count 10 lugs on the bass (=22) but you could order anything you wanted from Ludwig so a 12/13/16/20 set is not an impossibility. It technically would not be a Hollywood if in those sizes but the catalog configurations were suggestions as to ready to go outfits. They were not set in stone if the buyer wanted something different.

If he was an endorser there is a slight possibility Ludwig may have put that satin flame wrap on at his request. Anything is possible but I tend to doubt that because it would market something they didn't offer.
B 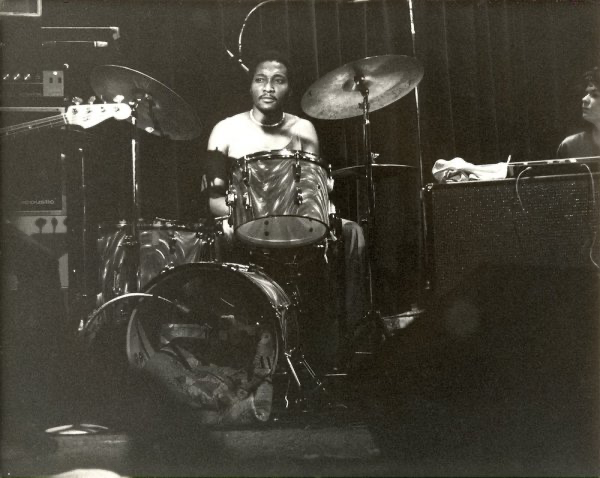 Looks like 8 lugs in this pic so yes, a 20" BD.
As Kevin said, you could order in any configuration, not limited to the setups shown in the catalog.
In fact, no reason to assume these drums all came together if it's a rewrap.
S

here you can see the whole set with one tom only. 20 like the other images.
so I wouldn't declare Hollywood.

nor imossible, but hard a custom configuration with a custom wrap for a very simple set.

maybe drums from different ages that he made rewrapped? 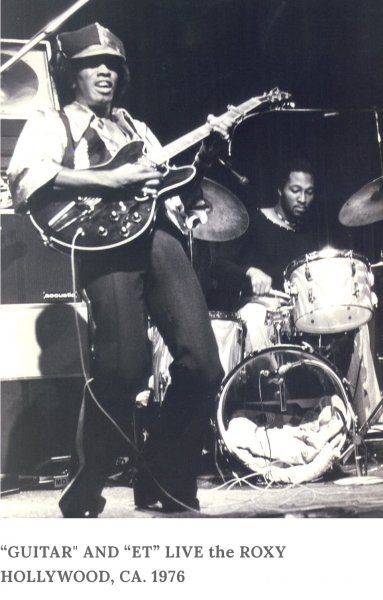 I was looking at the picture on my phone and it looked like there would be 10 lugs to me but using my laptop I see I was mistaken. 13/16/20 it appears. Either way though you could get a 20" if you preferred or he may have picked up a 20" somewhere along the way before getting them all rewrapped to match....perhaps the very reason for the rewrap.
You must log in or register to reply here.

Got a text today after getting a tip about some Ludwigs