Eddie Knight, 87, from South Bend, IN passed away last Tuesday. As a teenager he hung around at the George Way factory were they gave him the nickname, Bebop, and he was close friends with all the factory personal, including
George Way and later Camco (Oaklawn) president, John Rochon. He became a great drummer, leading The Eddie Knight Orchestra, an exceptional educator with the Eddie Knight School for Drummers, and an endorser and dealer of the 1960's era Camco Oaklawn drums with his smiling face pictured on the back of their catalogs - Also, the father of four daughters and a funny guy, too. I know that he made a real big impact on a lot of his students and fellow musicians.

With me being a big George Way and Camco drum enthusiast, I was thrilled to talk Eddie and his partner (handler), Norma, into driving the three hour trip from South Bend to The Chicago Drum Show in St. Charles, years ago.
The common response from Eddie when you asked him why he taught drums seven days a week was, "Because there's not eight days in a week!" so he would always remind me that he took Sunday off to be at the show.
He always brought some cool vintage snare drums, sticks, wood blocks, or traps from his collection to display on my tables and he'd have a sly grin on his face as he opened up a drum case in front of us because he knew he had
brought something special, such as George Way's personal walnut wood blocks that he brought home from China.
I was honored to have him hang out at my booth and arranged a few meet and greets though he was a rather shy humble fellow and seemed to cringe at signing an autograph, although he was a great story and joke teller.
We even did a few comedic routines with me being the straight man, of course. I would ask him, how many people played in his band and he would answer, "About have of them." ... Rimshot!

Eddie, Norma, and his daughter, Julie, attended the last Chicago Drum Show last May and we got to hang out for the last time.
He had the brightest twinkle in his eye and the most mysterious smile on his face. He was a true legend to me, and many others.
I'll do my best to keep your legacy strong.
Thank you, Eddie
Joe
Last edited: Sep 22, 2021

Thanks for the nice tribute, Joe. A few days ago I was looking at Rob Cook's THE LEEDY WAY book, and saw the photos of Eddie, and wondered how he was doing. Strange to see this news so soon after having that experience.

Great tribute my friend! I always enjoyed Sundays at the Chicago Show as I knew Eddie was gonna be at your booth. I had him sign the inside of my Camco snare that has a Eddie Knight School Of Drumming stamp on it. It was a really cool moment and I will cherish that memory! I will miss him dearly. 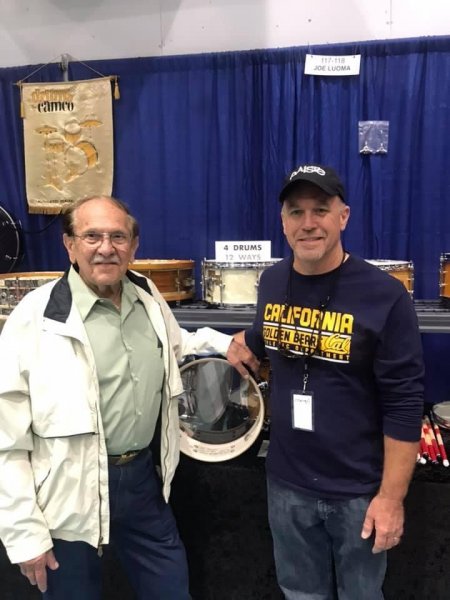 Thanks Prufrock and Steve. Rob Cook's Leedy book is great and I always tell vintage drum enthusiasts to order a copy if they haven't already and support our authors.
They aren't getting rich by putting out these amazing books and we are so lucky to have access to all this cool info, stories, and photos.

And nice photo of Eddie, Steve, and the Camco banner flying in the background. My photo with him is from the 2016 Chicago Show... Eddie always had nicer shirts than me.

I did revise my post to include Eddie having four daughters and bringing some real goodies to display at The Chicago Show.

Just saw this Koloa. I too was fortunate to meet him and listen.
Sadly missed!
Thanks Joe for sharing.

Sad new... well, I never met Eddie Knight but, I do have a few of his Camco kits in my collection that has his "School of Drumming" stamp on them.

Osahead2 said:
Sad new... well, I never met Eddie Knight but, I do have a few of his Camco kits in my collection that has his "School of Drumming" stamp on them.

Osa, are they those little metal badges that drum shops used to get made up and put on drums they sold? Regardless of their form, I could dig seeing some pics of them. I love that stuff! It is our rich drum history.

Here’s a photo of the Eddie Knight School stamp which is 1 1/2” in diameter. The Eddie Knight sets that I’ve seen or owned had Rogers Swivomatic tom holders and sometimes a telescoping cowbell holder on top of the bass drum.

Cool, jolo!
You must log in or register to reply here.

Question for you touring guys.

Name change for my band