Random musings - Popularity of the 22 ?

This is a fascinating thread. Like a previous poster, I too thought 20’s were the standard growing up and a 22” just felt massive. I know a lot of drummers that barely think of their cymbals. Most of them are playing 20” and one of my buds is playing an 18”. And then there’s people like us... It’s like what a different previous poster said: People who like cymbals like big cymbals. There has to be something to that.

For the sake of the argument, Ginger Baker, Mitch Mitchell, Keith Moon and John Bonham all played big cymbals. Maybe not all the time, but at some point in their famous bands’ histories, they did. I see a lot of 20’s out there too when I do research, but a hell of a lot of 22’s too.

My movement into a 22” had to do with wanting darker sounding crashes, which lead to “needing” a lower pitched ride... I could happily play a 20” though if I found some great crashes to pair with it. 20” would also be my choice for a 1 cymbal set up.

I was a 20" ride player for a while. My first exposure to the 22" was in high school jazz band, the school's drumkit had a 22" Paiste 505 Heavy Ride and 17" 505 Medium Crash. When playing alongside 5 trumpets, 4 trombones and 5 saxes, the 22" swing pattern really cut through nicely. I bought a 22" Paiste 3000 Reflector Power Ride shortly thereafter and played 22"s almost exclusively, until recently when a newer project necessitated a less pingy and cutting sound -- hence the re-entry of the 20" for me. I still prefer the 22" overall, it just fits my kit better and I've gotten used to its placement between my kick drum and floor tom.

When I read the title and it said "22", I almost immediately thought it was about bass drums.

My first ever ride cymbal was an 18" Zildjian mini-cup. Never did it for me, washed out too easily. Then, I grabbed a 22" A Ping in '82 or so, which I have to this day. Now, I used to play 2 ride cymbals a la Cobham or Ian Mosley of Marillion. What was amazing is my buddy bringing over his 20" A Medium ride and finding it was the 22"'s CLONE in every way. That changed my impression of what size does or doesn't mean.

Later, when I began more gigging and finding that space is a premium in some places, the 20" just seemed like a more reasonable size. I have an occasional 21", but the 22" is now semi-retired.

I like a big ride I cannot lie. Would love a 24 with great stick definition and wobbles like a maniac when crashed.

I think kits are getting smaller (Bop Kits), and venues getting smaller. Hence, IMO, the real estate calls for a 20" and smaller, though I still have both, seem to use the 20" more.

I think 22's had their home in rock arenas and dual kick setups. Maybe it's my age, but I seem to enjoy my small 4 drum setup with smaller cyms

I too noticed that 22" rides have become more prevalent. I still stick with 20"s, they work for me. I also find 18" as large as I need to go with crashes.
S

Someone mentions pre-pack, those still seem to be 14/16/20 most of the time. 22" seems like an upgrade from that. I know of one well-know jazz drummer who said he played 20" old Ks first becuase they were more affordable. He's using much larger sizes now. Not sure the sound is that much better. The right 20" can be all you need to listen to the whole night, not even a LSR needed.

I like em all; taking weight into consideration, it’s a balancing act between pitch and volume. My quietest ride and my loudest ride are both 20’s, with the louder one being heavier and higher pitched; my most “medium” ride is a 22.

When I started paying attention to gear & started “upgrading” my entry level cymbals in 89/90 the “standard” cymbal set ups all seemed to be 14” hats, 16” crash and a 20” ride. If you had the money you added an 18” crash. My hats & crashes got upgraded first and I intended to get a 20” ride to match but the shop I was buying my cymbals from only had a 22” in the brand/price range I wanted. I reluctantly took the 22” (was a 22” Paiste 2000 power ride) and played it for several years before trading it for a 20” Paiste 3000 ride. While I liked a lot of things about that 20” I missed the lower pitch and the feel of the 22”. I’ve been hooked on 22’s ever since.

tripp2k said:
I like a big ride I cannot lie. Would love a 24 with great stick definition and wobbles like a maniac when crashed.

Exact description of a 24" I bought yesterday

I just posted the mid 50s distribution of Ride cymbal sizes in another thread and larger sizes were more popular way back then kids.

I know you were interested in the 2000s and later but the cycle has gone around before.

This distribution shows the usual pattern of fewer odd diameters (17,19,21,23) compared to even (18,20,22,24). But the larger number of 22" compared to 20" is different from some other eras. There is a relative excess of 22" and larger sizes. Big diameters were popular in the mid 1950s. Fashions change in a cyclical fashion. 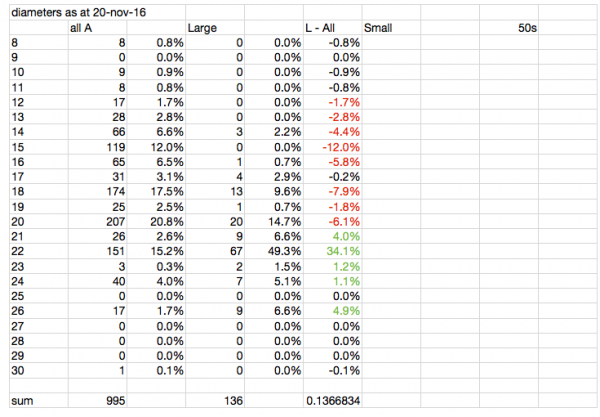 For those who follow links there is a bit more exotica on display in the other thread:

A vintage Zildjian - with a "zillion" die stamps - one for Zenstat

Most likely as stated a factory stamp-punch cymbal. I once had a double stamp AZ.

When I started in 1970 as a kid my ride was an 18" as well. I graduated to a 20" in the late 70's and stayed there until about 5 years ago. Then I started the migration to larger plates but not only with the ride, but the entire cymbal bag.

Through the 80's and 90's it was all about 13" and 14" hats, 16" crashes and 20" rides for me. Today it's 15" to 16" hats, 18" to 20" crashes and 22" to 24" rides. But what pulled me along was the move to thinner designs. I know they existed in days past, but I never seemed to find them, all my Zildjians were always so heavy that I think I stayed small to provide a form of control. Today the mellow wobble of a large cymbal is a thing of joy to me. So much now that every cymbals becomes a crash or ride as the tone is needed. But my sweet spot on rides does seem to be 22's.

I prefer my flat rides to be 22" (I favor flat rides over bell). To me, the obvious is reason enough...the bigger 22" is more articulate and more of that 'woody' or 'tah-tah' sound I prefer my flats to be. I find the 20" flats of like series to be more 'washy'. Not to mention what seems to be more playing surface.

I’m certain any number of custom makers would make one for you. Plus some of the Turkish brands take custom orders.

Gcort49 said:
I prefer my flat rides to be 22" (I favor flat rides over bell). To me, the obvious is reason enough...the bigger 22" is more articulate and more of that 'woody' or 'tah-tah' sound I prefer my flats to be. I find the 20" flats of like series to be more 'washy'. Not to mention what seems to be more playing surface.

Yep. I’ve got a 24” Agop Turk flat that I acquired from a fellow forumite, and in the past I’ve owned a 24” (and a 26”) Soultone flat. If you wanted to try one of the Soultones out, they can usually be had for dirt cheap on Amazon.

dogmanaut said:
Yep. I’ve got a 24” Agop Turk flat that I acquired from a fellow forumite, and in the past I’ve owned a 24” (and a 26”) Soultone flat. If you wanted to try one of the Soultones out, they can usually be had for dirt cheap on Amazon.
Click to expand...

When I started during the late 1960's, my drum teacher had a 22". I understandably assumed that was the proper size, though when it came to buying, I couldn't help noticing that the 20" was cheaper. My teacher told me that the 20" was fine, so that's what I bought.

Fast forward to today, and I confess to never having owned a 22". I've owned a couple at 21", but never a 22". I don't know why this is. I don't have anything against a 22", but suppose I find what I want in a smaller diameter--and yes, the 22" is still generally more expensive.

I have though subsequently wondered why my drum teacher, a jazz cat who came of age during the 1950's, had a 22". That now strikes me as too big for the kind of music he was playing. Probably it's as Zenstat says, the 22" was just in fashion then. I gather it's once again in fashion.

My own two cents is that there are many other factors that affect a cymbal's sound besides its diameter, so I don't put much emphasis on that. True, I think 18" is usually too small and 24" too big, but there are exceptions. I'd buy a 22" if I liked it and the price were right, but wouldn't buy it because it's a 22".
You must log in or register to reply here.

T
What is it about remo coated ambassadors that..
2 3 4