wflkurt said:
BTW just to expand on that pic that Kevin posted, this drum is actually a six ply shell, rounded corner with rivets. I saved pics of this auction years ago because I had never seen a psych red go that late into production. I thought it was cool anyway...
Click to expand...

Wow that is a late one. Years ago there was a debate here whether Psych Red survived into the six ply era. At the time I said I figured that at least a few were probably made. I guess this proves it...and then some since the rivets probably push it to up to 1980 or very late 1979.

The later Psych Red (which I like to think of as the "bowling ball" version although of course it was never called that, then again Ludwig has never issued any wrap that is officially called "bowling ball" anything...that's just a drum collector slang term) actually looks quite cool in person. The colors are very bright, it seems that the later green does not fade. Almost neon like red, blue, and green, floating in a sea of deep inky darkness. If they'd given it its own name it might have been more successful as it's not really a great match to the original. I've had a couple of opportunities to grab some drums in that later version of PR over the years, some for cheap, but always passed because it wasn't the "right" version of the wrap. In retrospect that seems to have been a mistake because a full set of drums in this finish would look quite cool.

As far as I know the later version of the wrap has never been reproduced, and, frankly, neither has the original in a sense of a true re-issue that looks like the original. Bum Wrap has done a pretty good job of repro-ing it though with various degrees of fading available to match up with vintage drums. I'd bet they (or Walopus) could probably likewise reproduce a decent copy of the later version if someone supplied them with a drum to scan. My 14" floor tom is a six ply power tom (13x14) masquerading as a floor tom wearing Bum Wrap's "Red Psychedelic More Blue" wrap. It works fine, serves the purpose, and didn't cost me a fortune to create but this ebay drum, rewrap or not, is intriguing because of being a 3ply. As such it will probably go sky high at the end. I had to pay a pretty penny for a stripped Standard 14x14 shell a few years back which is now part of my mod orange set...but it was worth it. 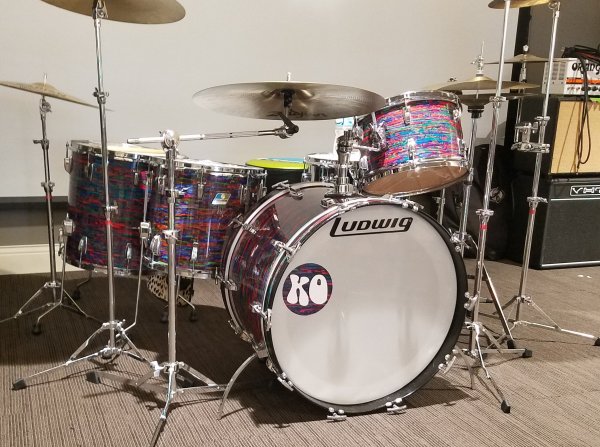 I have 2 sheets of the the late version wrap that I bought from a drum shop that had it sitting on a shelf since the 1970's. They are sitting preserved waiting for the perfect project to come along.

I also have an 18x20 Mach Lug drum that was ordered around 1979/1980 to match an early 70's Mach Lug setup (I still wonder where that set is hiding). Although ordered in the 6 ply era it is a 3 ply drum with a Granitone interior. I wouldn't be surprised if under the paint it was a inner ply mahogany late 50's early 60's shell like other B/O 18x20's I've seen- even though they weren't sold until the 70's.

Unfortunately that drum was swiss cheesed by the original owner in the early 90's when he decided to turn it into a bass drum- it has curved spur mounts a Yamaha YESS receiver on it. All drilled crooked of course.....

Always seems the rarer the drum- the more someone can't wait to attack it with a drill.......

Relisted floor tom PR rewrap is up to $355 with an hour to go before auction ends. I suppose it would likely be over double that if it were original wrap. Will it go higher?

The original topic pic has a similar look to the Element SE kits that came out some years back. Maybe someone replaced the SE badge with a Keystone?
I agree that the later 70's pattern sure is nice, much like a strata type wrap. 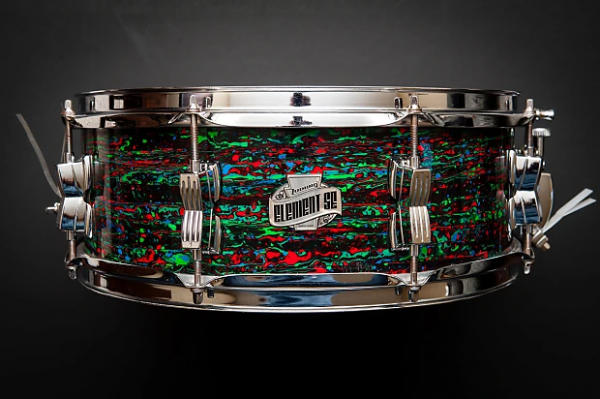 It's the same wrap as used on the Element SE series. Either Sam bought surplus sheets or had another run of it made. From the description (3 ply white interior) I don't think this could be a rebadged element. 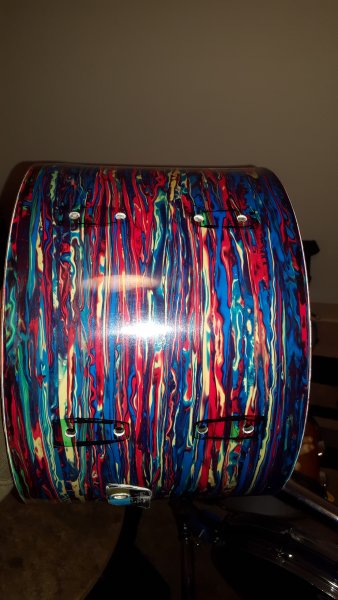 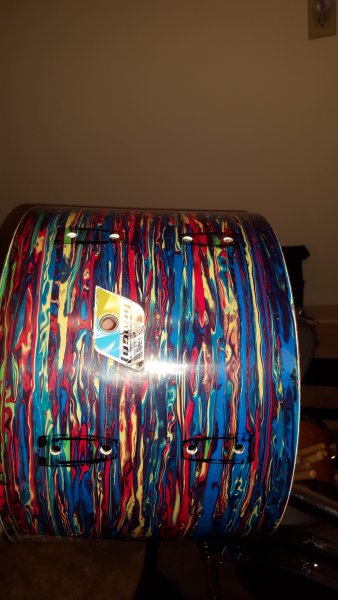 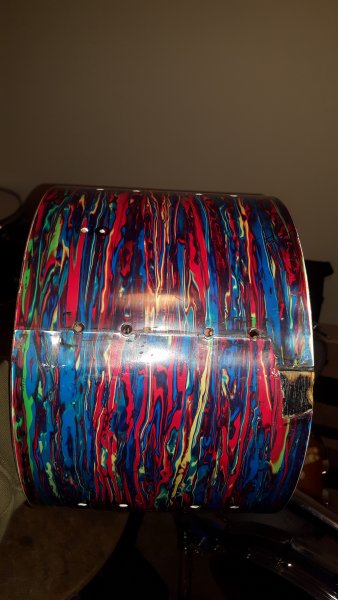 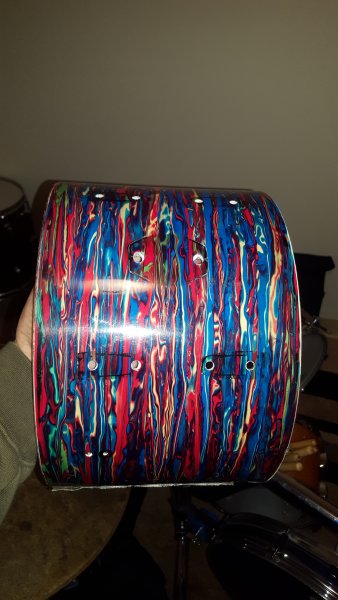 That is the coolest version that I have seen.

Does the wrap go into the plies on that drum? By all accounts they weren't using that style of psych red in 1976 so I am curious about other details on the drum. Granitone or clear on the inside?

I will have to check. I didn't think they were still wrapping into the plies in the mid 70's. I do know it si clear maple inside with re-rings, and no date stamp or other marking I can see. Original badge (although bent & scratched!) and grommet looks unmolested.....

I have not been able to find any matching drums sadly.....

I get typically confused when people say that serial numbers in the 1.1m mark are 1976. I have been collecting pics of drums that have dates inside AND serial numbers. I have a pic of an acrolite from Dec 21 1971 with a serial number of 934203. In my mind that would make a drum in the 1.1m mark at least a 1972 or 1973 drum. That would also explain the pattern of wrap on this drum. It's the same pattern that was used from 1967 on up until the change which seems to be mid 70's. Just my 2 cents.

WFL, I just went online and found the Ludwig serial numbers posted somewhere. Based on whatever. That said, I concluded 1976. That explains why I can't find a 1976 drum to match this one. I suppose I can look for earlier versions now. I'd like to see a photo of earlier drums if you have any please.

Also, I did check the wrap. The wrap does not go into the seam. It starts short of the joint in the wood and wraps the other way all the way around over the joint and about an inch overlapping the initial edge.

The wrap stopped going onto the seam sometime in 1968. Kevin posted his set, which is a 1971 and it is very much like your tom. I have a 1968 rock duo that has very little fade. The color did not change from it's inception(1967) until the other version. Even at that it has been said that the other versions end runs from the original stuff but I can't confirm that anywhere. The original stuff was like any of the pearl finishes in that the patterns were all random. Some sets could have more greens and some sets, or even individual pieces could have more red. I say that because the 8x12 in my set has less green then the other pieces and it almost has a darker look to it. My set would also be near mint but sometime before I got them the sun must have come through at an angle and just slightly faded the side of both bass drums and a side of the 13. The 12 and the 16 seems to be untouched for the most part. Your drum had a good amount of green that has faded out from sun exposure. If you look at Kevin's set, he had a fair amount of fade and he used a green sharpie to bring back the green. It's a tedious process that can drive one mad but it does work to a degree. I did a full 1968 set once and I thought I would end up in a mental institution!