Anyone ever record in mono? I’ve got four inputs and have been planning on some iteration of the Glyn Johns method but problem is the only matched pair of overheads I have are pencil mics and maybe it’s just the shape but they don’t seem to be the type of mic that will pick up a good balanced sound when utilized like the Glyn Johns method. I thought about just using them in regular overhead fashion or possibly using one pencil mic directly above the snare pointing down and then I can have a single large diaphragm condenser put over the floor tom (still keeping phase issues in check). That seems like it would make a sort of strange stereo sound if I used any panning since they’re different mics so I thought why not try mono? It seems if I want it to sound professional at all I’m going to need some spread but honestly, as much as I’d like to believe this will eventually be mixed with a big drum sound I know from experience these guys like to have absolutely enormous stereo guitar sound, crazy high bass, and the singer is doing the mixing so you know how that goes. What I’m getting at is that I already know these drums will be low in the mix so would abandoning the struggle for a balanced stereo sound really be that bad? I can give examples from our last album to give you an idea of how they like to mix but don’t wanna be self promotional

From the sound of it they might not even notice if you record mono! If you can get a great balance of the kit in mono I say why not. Especially if all the audio antics are guitar oriented.
This is just my ears talking as I'm no audio tech, so grain of salt and all that.

Nothing wrong with monophonic recordings at all.
T

Mono can work fine. That said, using Glyn Johns, the whole point is that each mic will be getting a quite different sound. One "down low" and one "up high". I've done quite a bit of experimenting with this mic placement and even with a matched pair, the sound is quite different from the low mic and high mic. You can just put your ear over there by the floor tom and hit some things, then put your ear straight over the snare - very different sounding. I would not hesitate to use two different, or even different types of mic's in the Glyn Johns method. As long as each mic sounds good unto itself, it will be able to be placed into the overall stereo mix successfully.

Mono drums done right, panned to the left side, no less!!

dsop said:
Nothing wrong with monophonic recordings at all.
Click to expand...

This is what I was hoping to hear! I didn’t know if this was a taboo approach that someone with any real experience in this would read and say “oh my gosh no”.
M

It seemed (and seems) to work out pretty good for a number of popular recordings in the history of recorded music. Heck even some whole bands sounded (and sound) just fine recording in mono.
You could even argue it can be more difficult to record in mono rather than stereo or multichannel. No cheating in mono land.....
I've done quadraphonic and 8 way recording/playback and some single problems were compounded.
bt
M

daveplaydrum said:
This is what I was hoping to hear! I didn’t know if this was a taboo approach that someone with any real experience in this would read and say “oh my gosh no”.
Click to expand...

I would think the opposite....someone with "real experience" would read and go why didn't I think of that...I'll give it a try....unless it's in their bag of tricks already....
bt

Just for a look back, the Beatles did many things in mono.

“Nearly all of these songs were intended to be heard in mono, on vinyl records. Although stereo recordings ("involving the use of separated microphones and two transmission channels to achieve the sound separation of a live hearing," i.e., two speakers) had existed for decades, during the Beatles' career mono was the norm for the overwhelming majority of the population; most people owned single-speaker "record players" until stereo systems began to proliferate in the late 1960s and mono recordings were rushed off the market.

Consequently, as many fans have maintained for decades, the mono versions are the "real" Beatles albums. "The Beatles [and producer George Martin] spent about three-fourths of their mixing time getting the mono mixes right for the records that most people would hear, and for AM radio," says Sean Magee, the Grammy-winning Abbey Road engineer who oversaw the new mono releases. Even as late as 1967, the Beatles were present for the mono mixing of Sgt. Pepper but left the stereo mix to Martin and the engineers — thus, the mono version is the Beatles-sanctioned one.“ 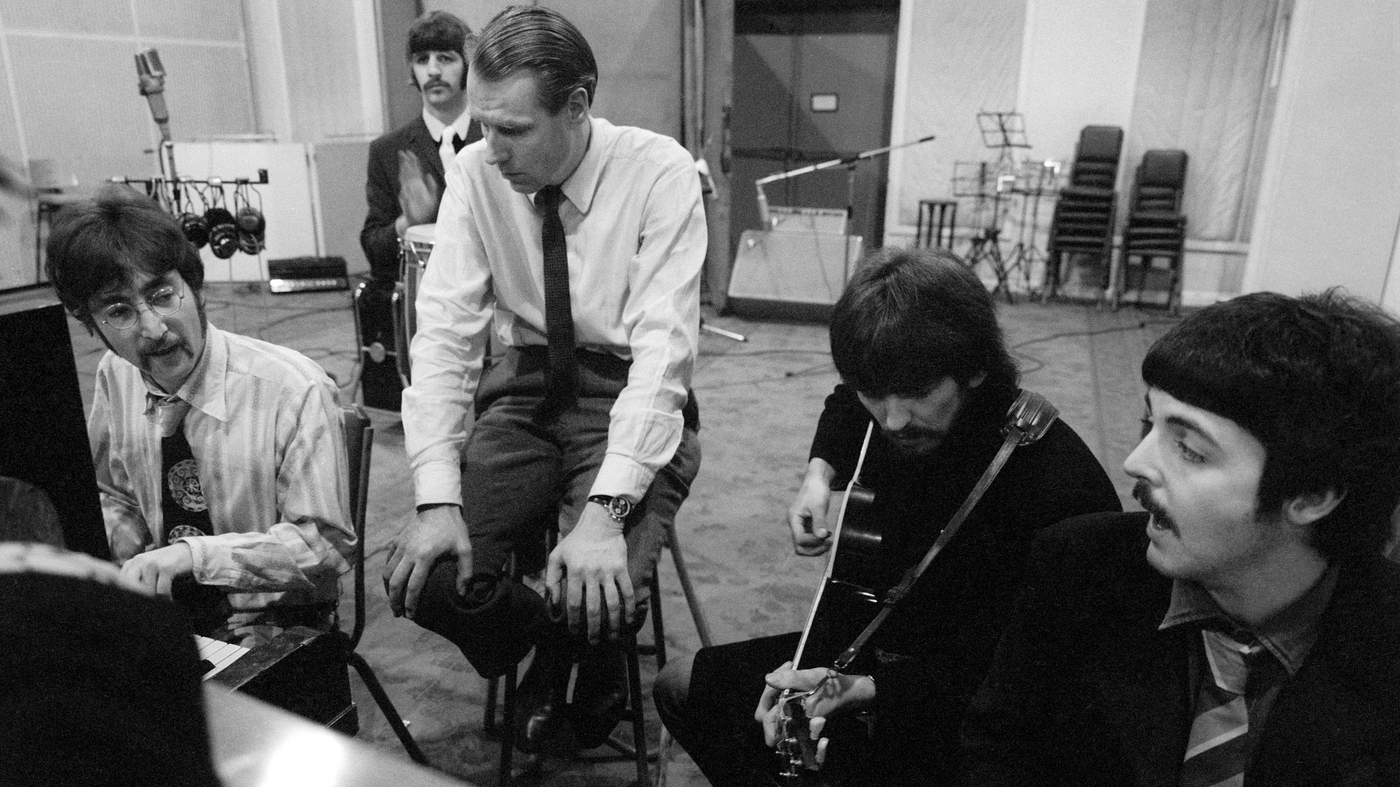 All Together Now: The Beatles Are (Back) In Mono

The latest reissue project in the never-ending celebration of the most famous catalog in rock 'n' roll goes back to the beginning. Does listening to The Beatles in mono make sense in 2014?

Been using a single LDC for an overhead for years. Who cares if you're listening with headphones and don't hear different parts of the kit in different ears.
T

Yeah - stereo can be overrated. My piano player, for example, always wants to be recorded stereo and pan the low slightly left and high slightly right. Yes, that’s how he hears it, but the audience hears the whole piano stage left (or right). Same with drums.

Try it and see how it sounds. (You won't break anything...) Just eliminate any phase issues and you should be OK when you center all the Pan pots. (P.S. Pencil condensers can work great for the Glyn Johns technique, especially if they're omnis.)

I did it without hesitation. I've released at least three or four recordings where the drums are totally mono. I think I released two 7"s back in the '90s in which the entire recording was mono. Yes, everything panned center!

Doesn't sound bad at all, maybe not huge, but it works fine. We were running 4-track master tape back then, sometimes without a dedicated mixer, so it was just plug in and go -- 1 vocal mic, 1 kick mic, 1 mic between rack tom and guitar amp, 1 mic between floor tom and bass amp. Pray it sounds good on playback.

Once we got to 8-track master tape, we would separate the drums into 4 tracks: kick, snare, left OH/rack tom combined, right OH/floor tom combined. It was then that I finally had the luxury of hearing my drums in stereo.

Kids these days don't know how nice they've got it!
W

Or buy a couple of cheap 57's for overheads instead of the mismatched pencil mics.
The main part of a kit is mono anyway (bass drum and snare). I tend to pan my toms just to give the kit a little width.
With most of my grooves centred around hi-hat, BD and snare, my drums are mono for most of any song.

I have done quick, down and dirty recordings with my Tascam 8 track digital recorder using only an SM57 overhead about 4' above the snare and just hanging downwards. Worked just fine to capture ideas and beats. When I am so inspired, I just my hand held Tascam w/built in mikes holding me over until my drum room is set up.....

One mono overhead and one out in front of the kick, maybe 3' off. Some judicious compression. Maybe a touch of small stereo room reverb on the oh to give some sense of wider imaging, if desired. Great sound.

All depending, of course, on how the drums sound, how they're played, tuning, the song material, etc. It all has to work together.
N

I record in mono all the time using three mics. Here’s some ideas:

Kick: Sennheiser e602, Audix D6, or Shure Beta 52
Snare: SM57 (duh), Audix i5 or similar
One overhead condenser. Set it 5 to 6 feet high pointing straight down over the rack tom(s). I’ve used everything from a U67 to a Rode Tube Classic II, the new Audix A131 (lovely mic, reasonable price), Audio Technica AT2020 (great if you’re on a tight budget), Cascade Fathead, this week it’s a vintage Neumann KM86 in cardioid.

The beauty of recording like this is that it minimizes phase issues, but you still have to check the phase of the OH mic versus the kick and snare.
You must log in or register to reply here.

OK, What's the catch with this price for a new Broadkaster????