Yup... said I was done with vintage but this is one project I've been wanting to do for years. Already have the Ludwig SS 6.5 x 14 snare and just bought this tonight (thanks cinemadrummer2001). Very minty looking vintage 18" Roto Tom in chrome! Going to need it's little brother in 14" next. This will be a fun one and will take a while to put together. 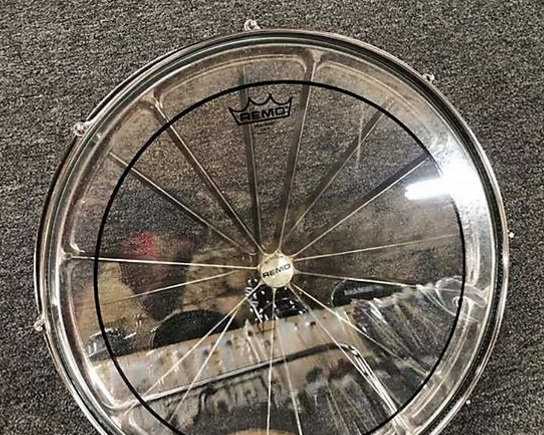 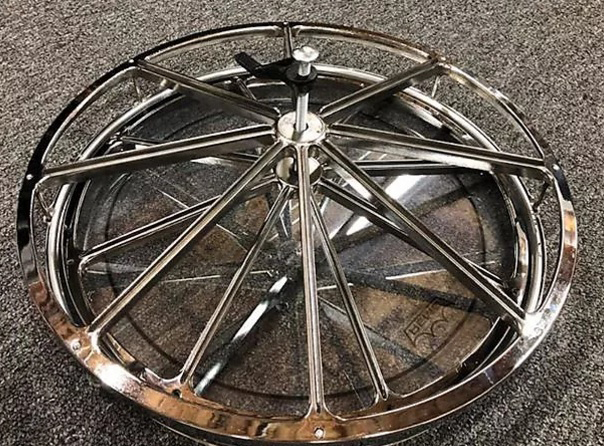 If you tire of this keep me in mind.

I'd love to do a roto tom kit someday. Just for pure fun.

I think Steve Weiss has a 16" in the bargain basement.

I will be picking these up on Sunday!! My first Ludwig kit... I'll be the 3rd owner of this Natural Maple Thermoglass kit with pointy B/O badges from 1977/78. The hunt for the illusive 14" Roto Tom continues as the Bruford - UK era replica project comes together. If I was to go completely faithful to the project, I would have to find an 8 x 12 Hayman tom, and wrap it in teak. Since the natural maple kit comes with an 8 x 12 (as well as a 9 x 13), I will employ the Ludwig tom in that role.

PS sidenote: I thought I had a Ludwig 6.5 x 14 SS, but I had forgotten that I had sold it for the JM/INDe kit. Therefore I am putting it out there that I am also in the market for a pointy badge Ludwig SS snare. any help or direction would be well received! 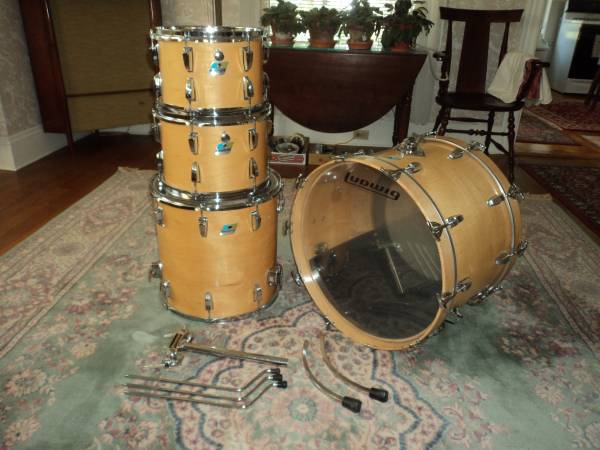 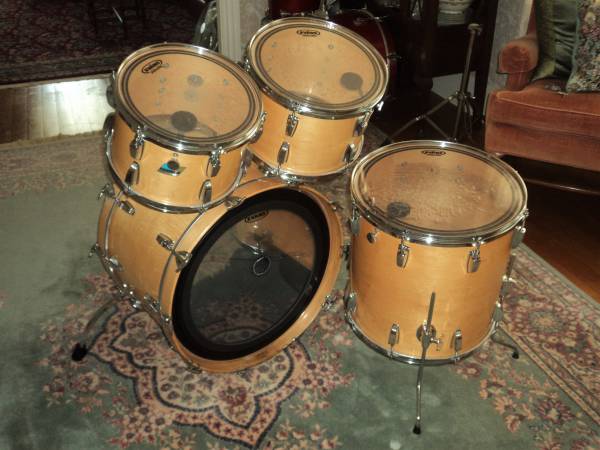 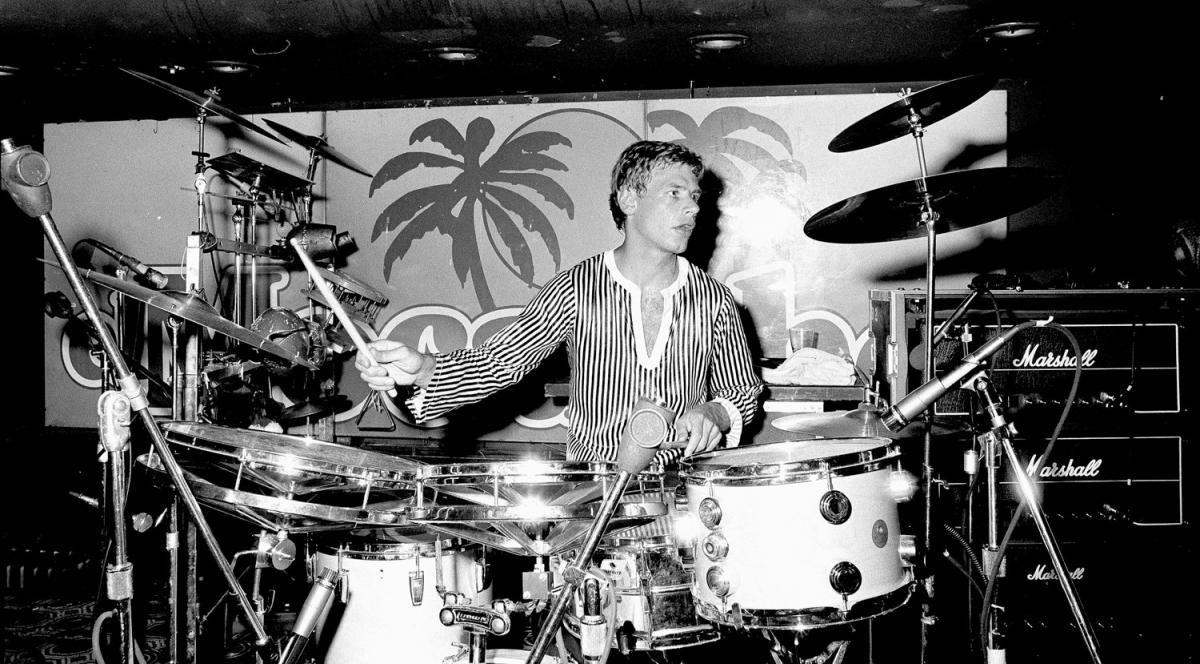 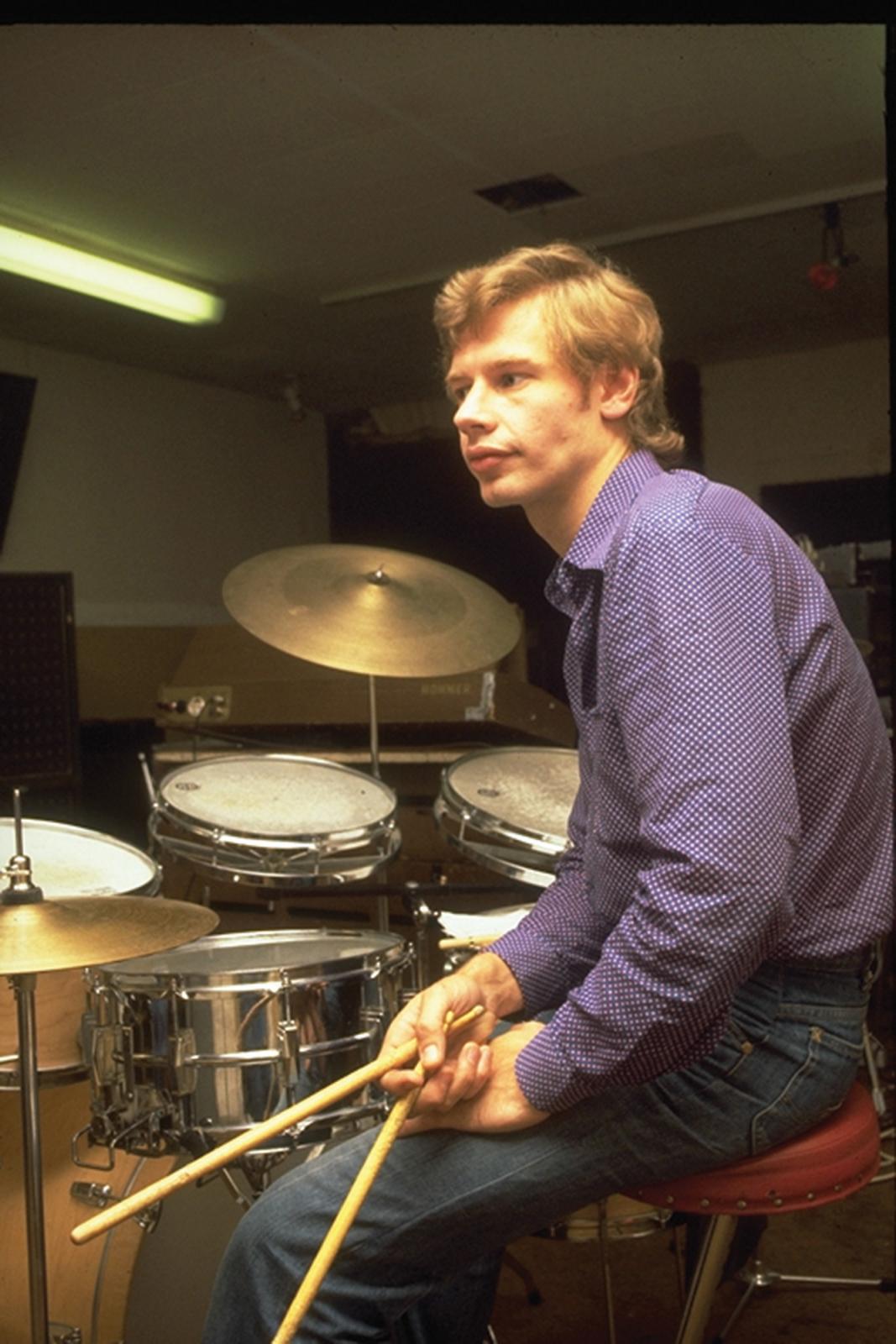 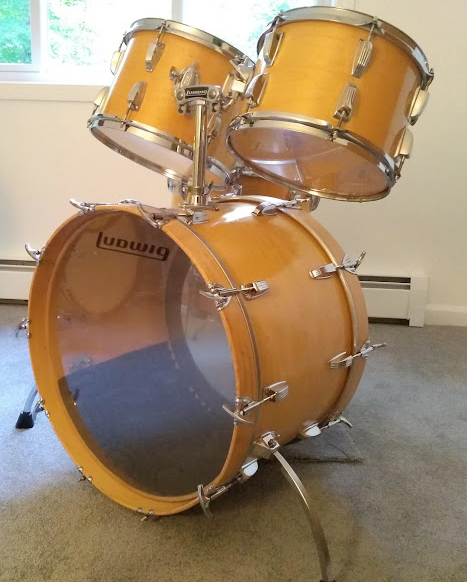 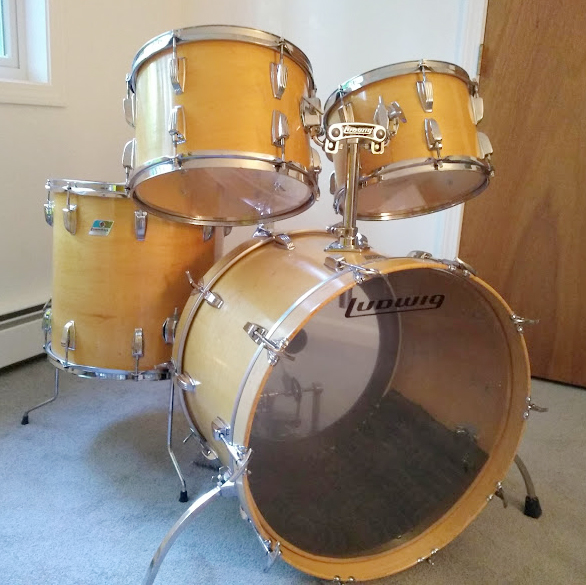 Many thanks to Charles, DFO member, nmrk91, for completing the Roto Tom wish-list. A great vintage drum at a more than generous price! Thank you for helping the project vision along! 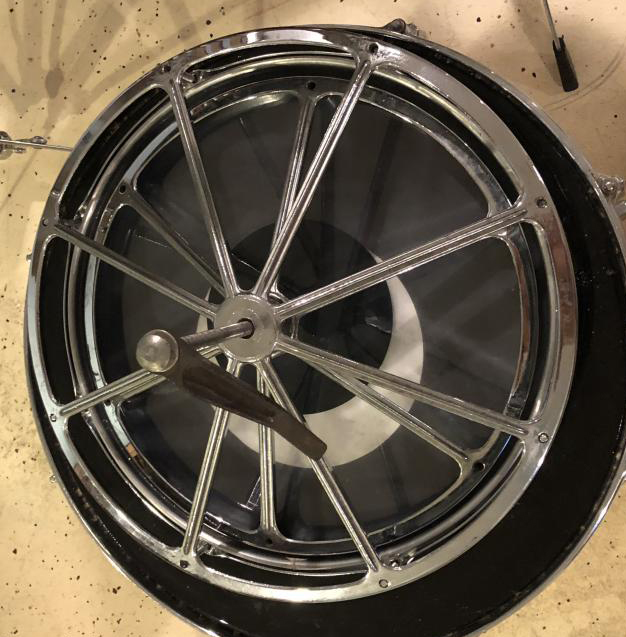 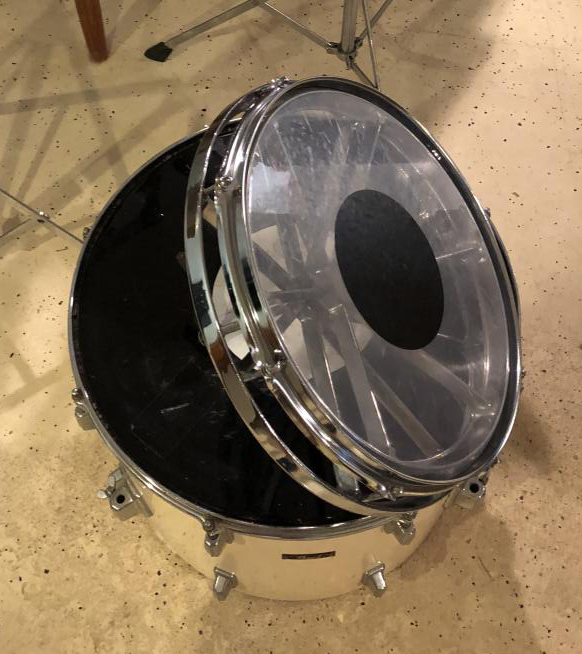 BTW, Bill's "Ludwig" kit was actually his COW kit that he bought when Yes got signed, which he subsequently tore the chrome wrap off so they'd match a natural Hayman kit he had. Regardless, sounds like a fun project.

franke said:
BTW, Bill's "Ludwig" kit was actually his COW kit that he bought when Yes got signed, which he subsequently tore the chrome wrap off so they'd match a natural Hayman kit he had. Regardless, sounds like a fun project.
Click to expand...

The sets list throughout the years would say otherwise. The kit he used with Yes was actually a "classic Oyster finish, then covered in a plastic-backed flexible chromium like material".

I believe he had a Hayman kit in "Pine finish" that was actually teak (This is the kit he used on "Close to the Edge). He mixed them in with a Ludwig Natural Maple kit with King Crimson. Whether that was the same Ludwig kit from '72, at the end of his stint with Yes, refinished... I don't know. Do you have any literature about this?

In this pic, Bruford was using a mix of Hayman and Ludwig. You can clearly make out the B/O badges on the Natural Maple Ludwig bass and floor tom (on the left in back, mixed in with the gongs and misc. percussion) he was using with KC at this time ('74/'75). 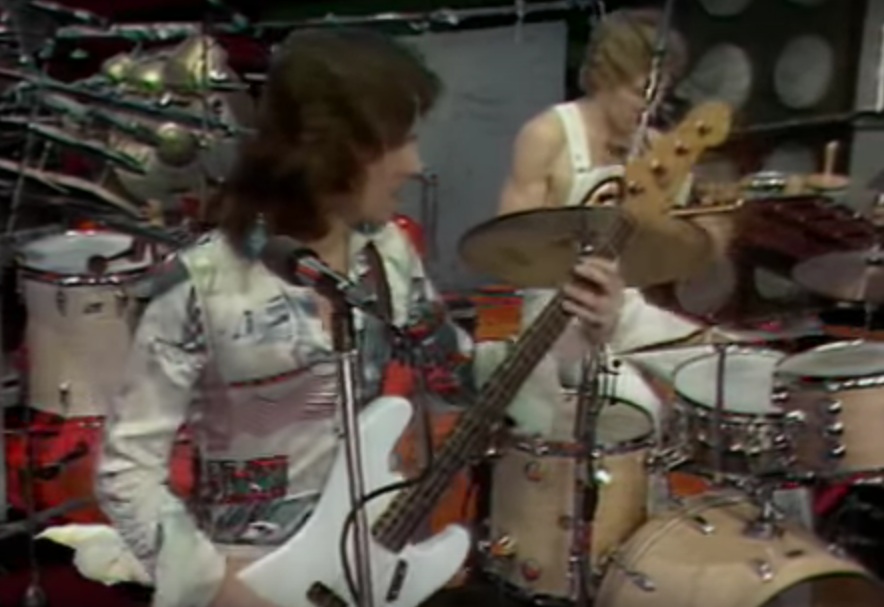 i see a Hayman floor tom on that picture in his "primary" set, and the Ludwig floor tom behind it near the percussion. Makes me wonder just how haphazard Bruford's acquisitions and placement of his drums were. It could've been merely a matter of opportunity that dictated what brand drums he used (although later he would be a Tama endorser).

Found the snare tonight... and a noteworthy specimen it is! 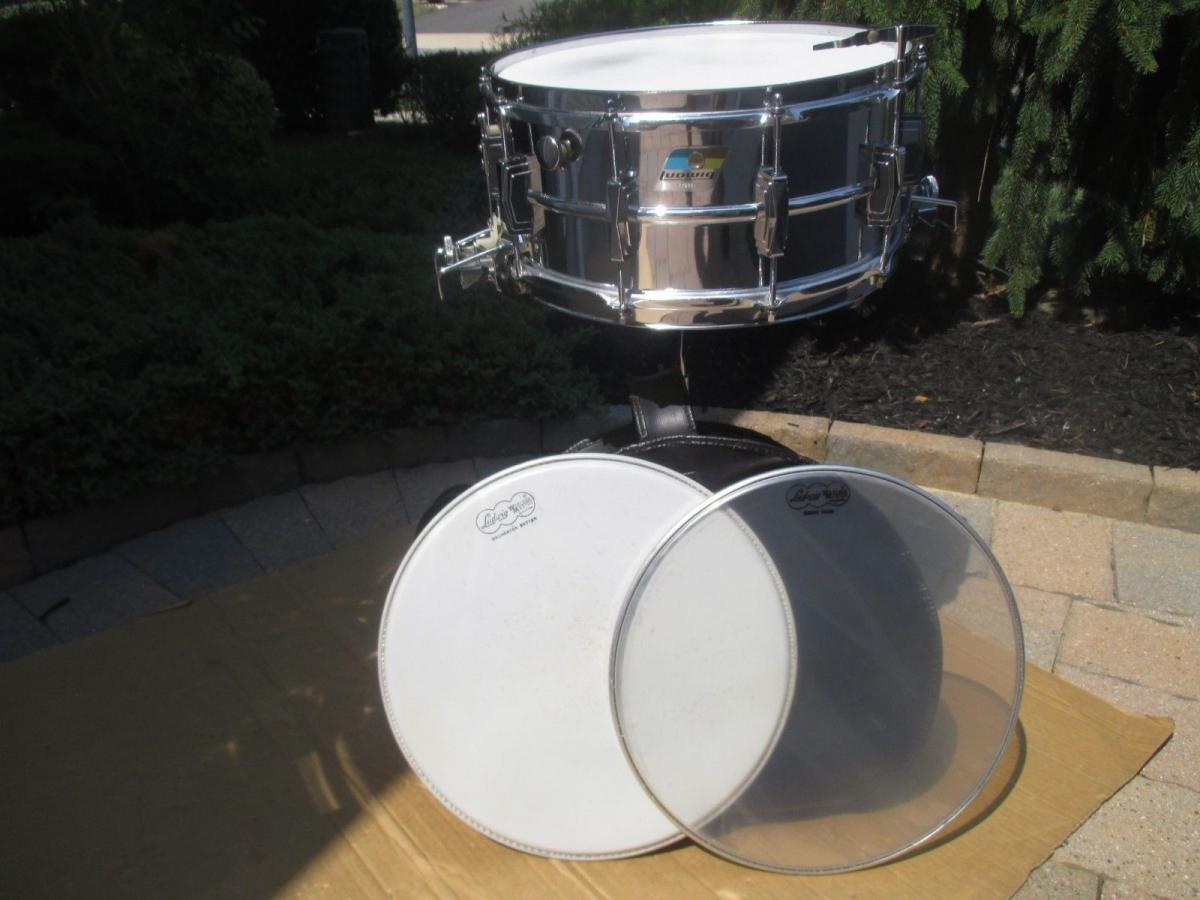 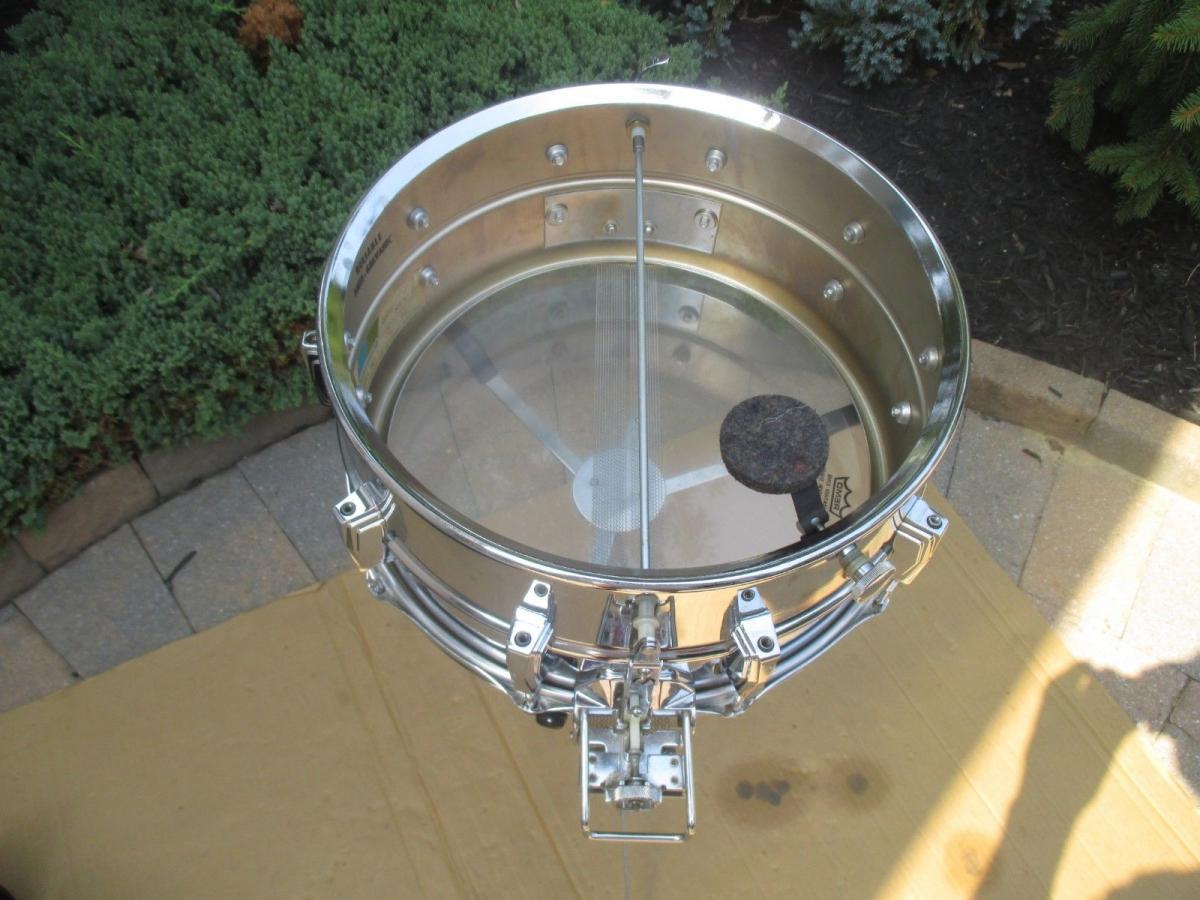 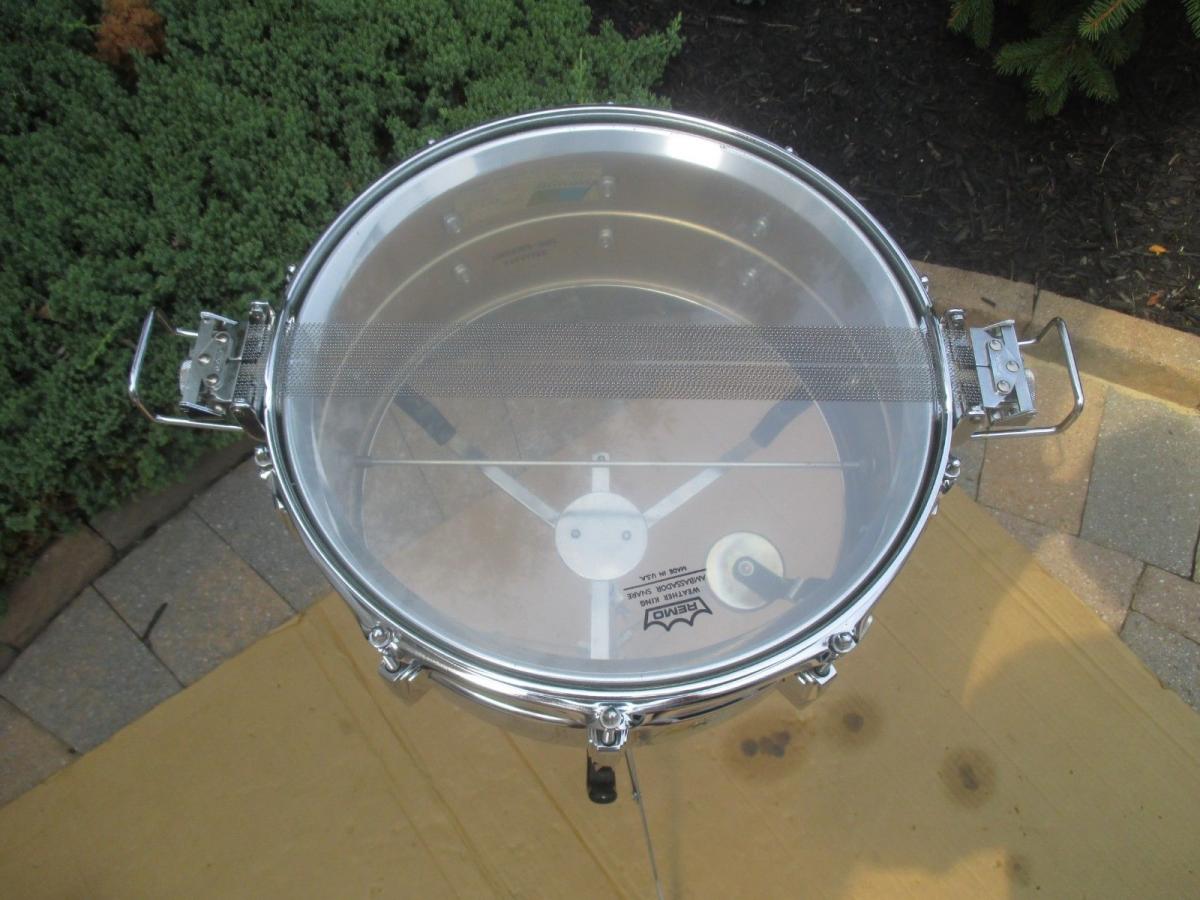 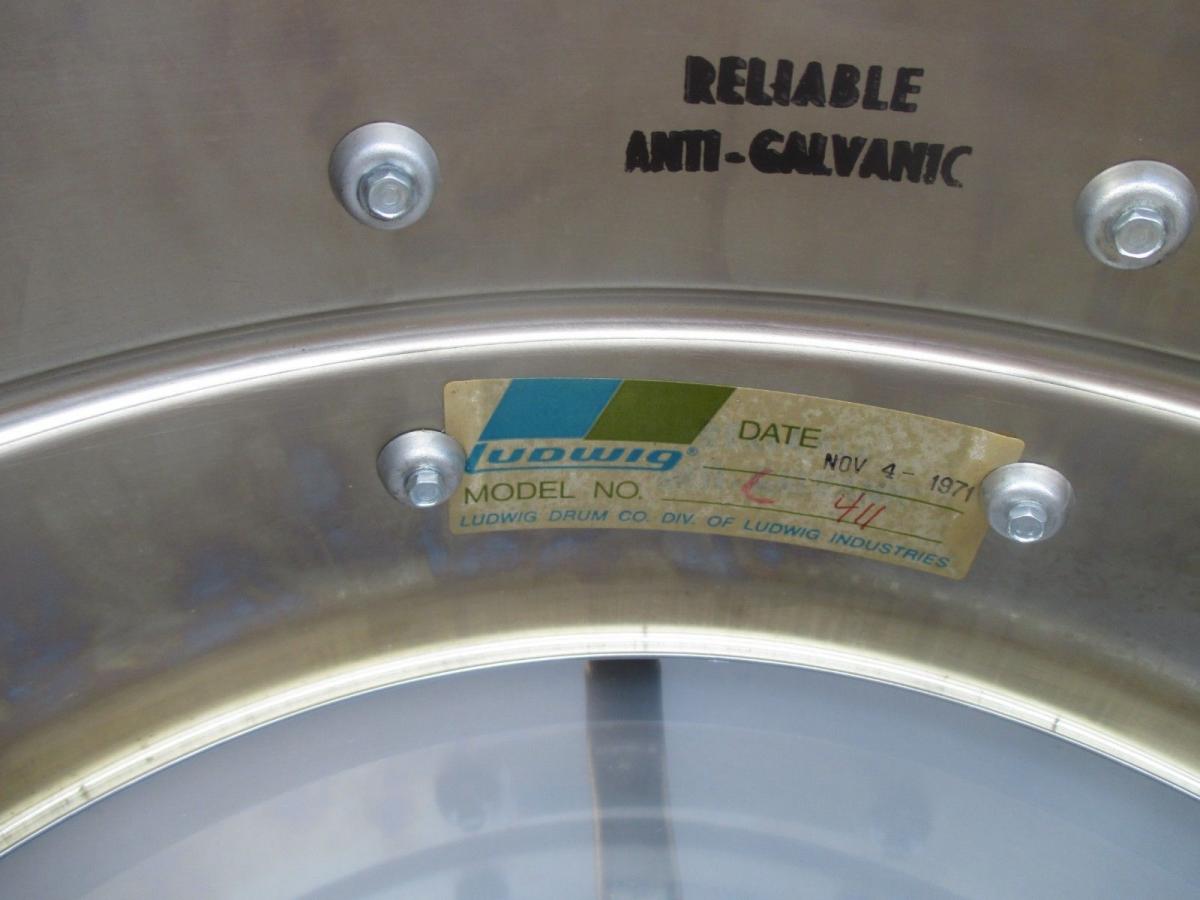 Nice score! I used to attempt to get the Bruford sound out of those but nah, never could. His snare tuning is some sort of audio alchemy.

BTW, Bill's "Ludwig" kit was actually his COW kit that he bought when Yes got signed, which he subsequently tore the chrome wrap off so they'd match a natural Hayman kit he had. Regardless, sounds like a fun project.
Click to expand...

The sets list throughout the years would say otherwise. The kit he used with Yes was actually a "classic Oyster finish, then covered in a plastic-backed flexible chromium like material".

I apparently got the story backwards. Thanks

Very cool! In that photo of him above, is that a 602 in the ride position? Looks like two different lathing types or something.

tillerva said:
Very cool! In that photo of him above, is that a 602 in the ride position? Looks like two different lathing types or something.
Click to expand...

Yes, he is a Paiste guy and used a 602 20" ride with sizzles during the making of the UK album, but also mixed in 2002 Sound Edge hats and a 20" 2002 China. He also used 2, 602 thin crashes in different weights for crashes. Atop his left side crash, was a cymbal stand extender that held an 11" 2002 Splash. A very "cymple" yet effective setup that was clean and precise. One of the nicest sounding rides ever recorded (IMHO) was on the second movement, "Time to Kill", on the song, "Alaska, on the '78 released album titled "UK".

He also changed out cymbals quite a bit when he wanted to keep it fresh. The cymbal with the 2 different lathing patterns may have been an 18" 602 heavy ride he threw in the mix at times.

It's kind of cool piecing together this kit because I really only have a few pictures with detail to go by. By studying the pics to get clues as to how to go about putting this kit together...

In the black and white pic, by the reflection of Bill's shirt in the drumhead on the SS snare I can only deduct he's using an uncoated mylar head, when I've always heard he's used coated heads. He also had to cut down the Ludwig L-arm tom mount to accommodate the Remo Universal block mount and the Roto Tom. There's also a bunch of gaffer's tape around the L-arm... trouble with a slippage issue? Bruford also had his SS snare angled up towards him, when I've read he usually plays with the snare completely level. He also switched heads on his Roto Toms between Pinstripe and Fiberskynes. He had a make shift, homemade mount for his 18" Roto Tom on a single stand in the black and white photo, yet in the color photo, the 14 and 18 Rotos are mounted on a track with single stand for the pair. His Hayman Tom has the original mount between two lugs, but a Ludwig tom mount has also been added, yet he uses a snare stand in the mix Lastly, he used a good old red-topped "Ringo" throne! LOL! Did I miss anything?

I've also read that his snare tuning is very tight and high with the snare side tuned higher than the batter. Conversely, in the 1978 Modern Drummer interview, Bill himself, states that the snare is:

MD: That popping snare sound is like a rim shot too, but tighter.
BB: Yes, it is definitely a rim shot. I tune the top head high, and the snare head a little lower. I have two basic notes on the snare: the rim shot and the softer, regular snare sound. Perhaps if I were a better drummer Id have more.
Gotta love Bill's humble nature at the time... having only been on the scene for less than 10 years at the time of this interview, and having accomplished all he had by the time he was 29 or 30, I'd say he was a bit "better" than he thought he was! LOL!

Waiting for a Roto Tom mount and the basic shell kit is complete. Now to start rounding up the 602's and 2002's! Thanks to DFO member, Ely for this sweet 602 medium ride with rivet holes, Just as Professor Bruford used predominantly in his 77 -78 mix of cymbals. 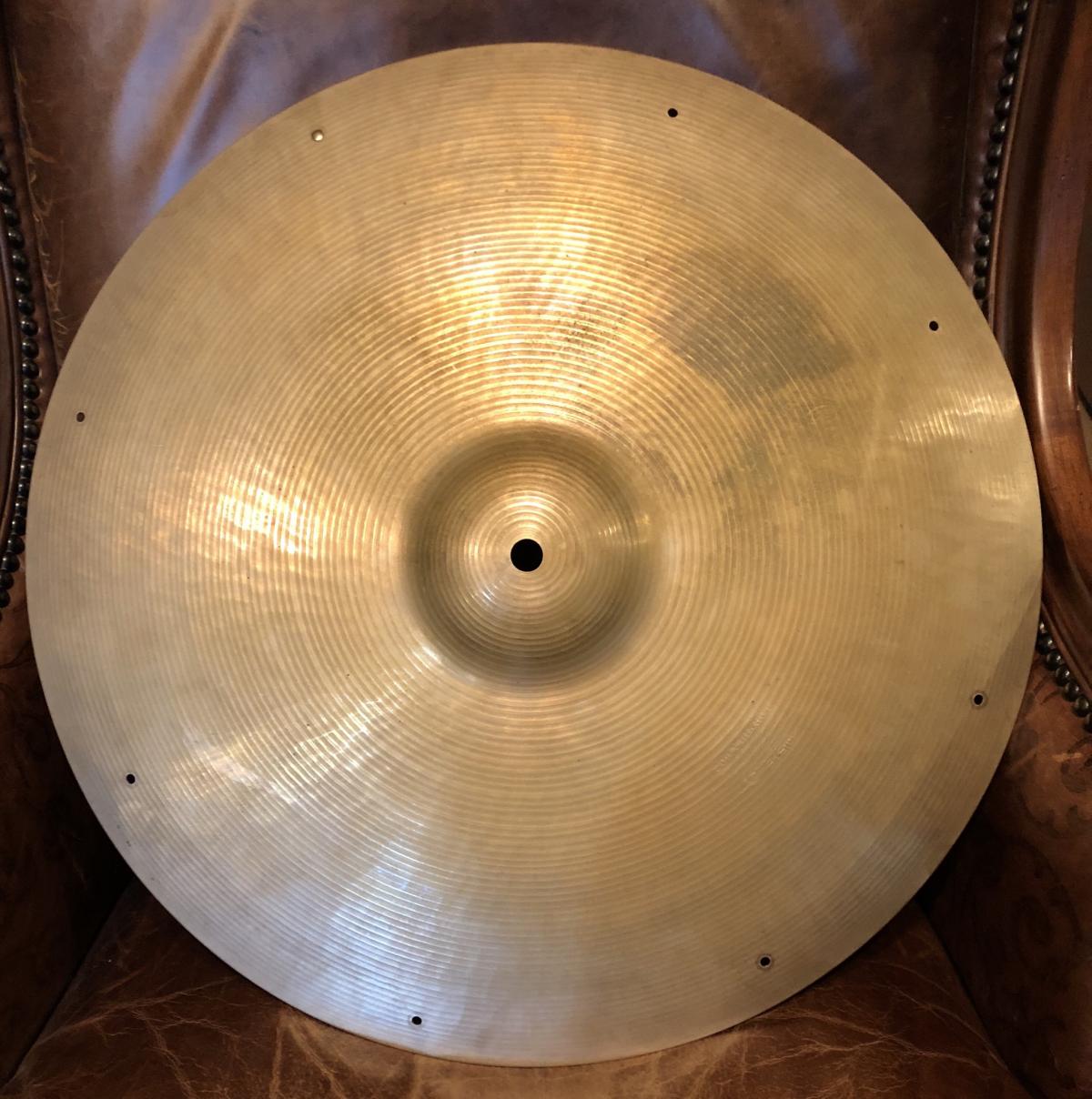 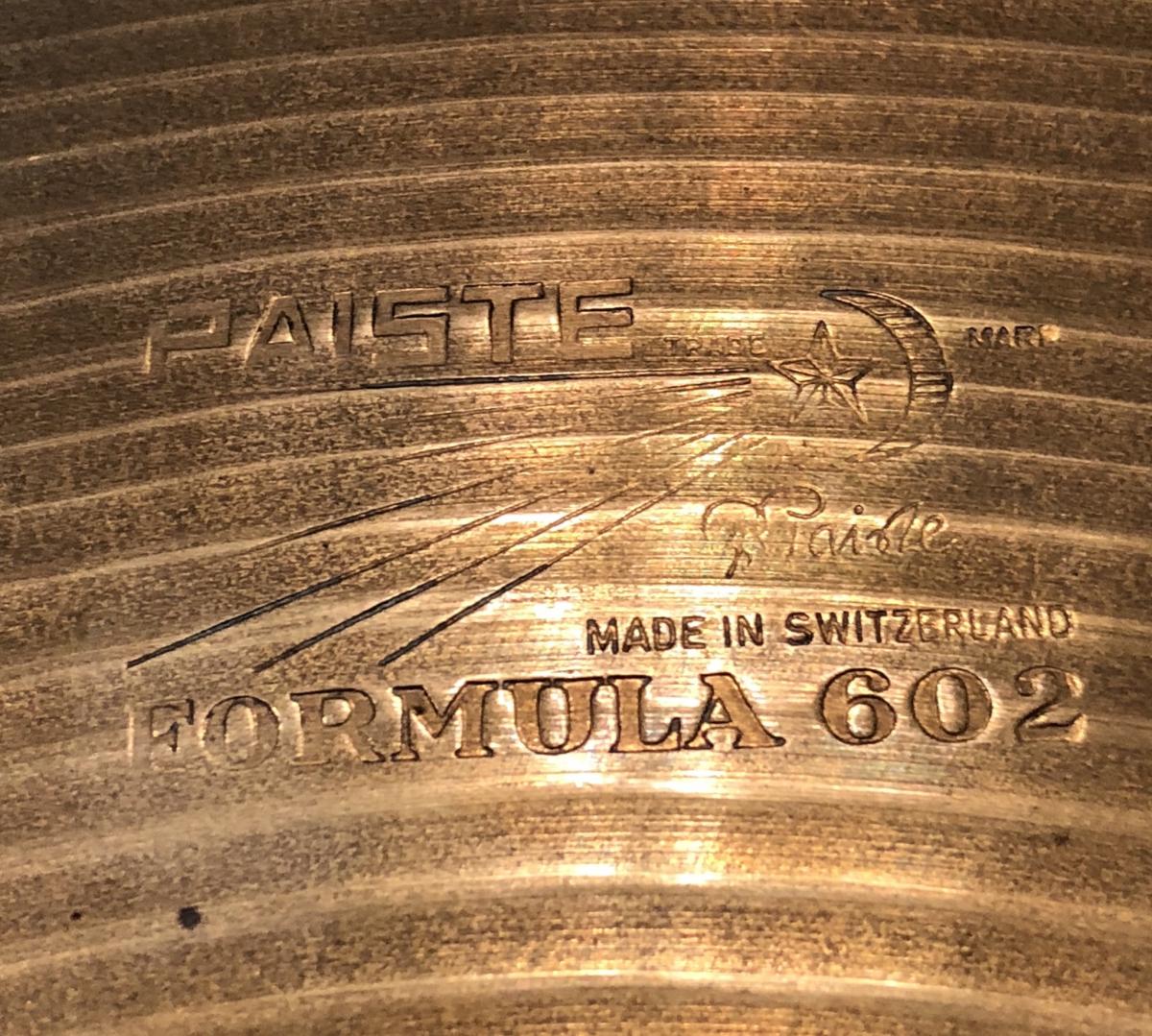 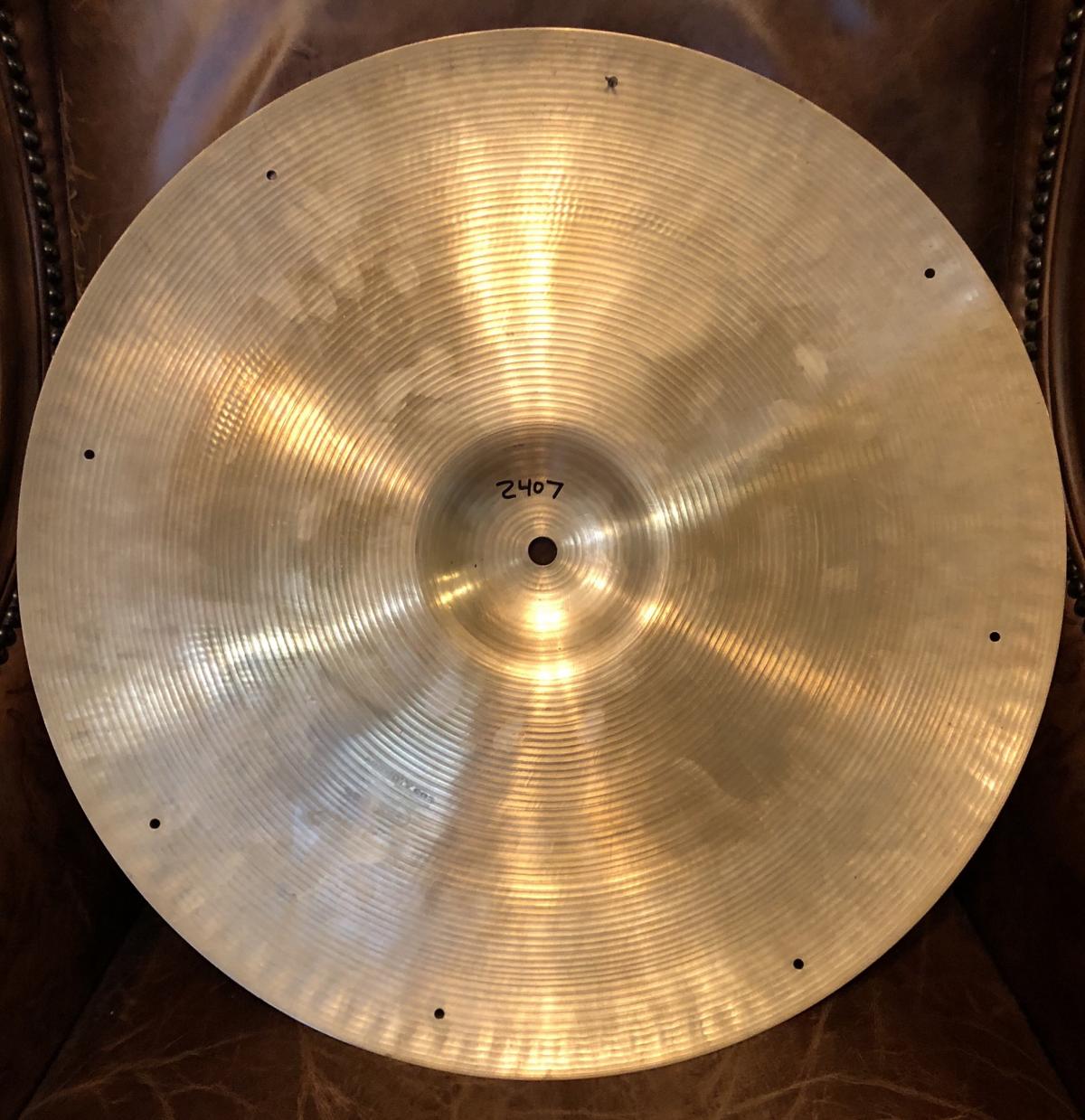 Looking for a mixer case SKB

M
Would a double bass kit work for most gigs
2