rocketonhudson said:
thanks for your reply....nickel hardware on late 1950's early 1960' Ludwig drums in the catalog are about $6.00 less on the jazz fest, not a lot of money in todays time, but back then people got about
$1.50 cents an hour, that's a half a days pay back then...stay safe...
Click to expand...

thin shell said:
I think Mr Bennett pulls the prices out thin air. His prices are ridiculous most of the time. He probably doesn't really want to sell the stuff that has the out of this world prices but would let it go if the right rich guy was willing to buy them.

The no fade lines on a drum that clearly didn't spend it's life in a case in a closet doesn't strike you as odd?

I hate to break it to you but the wrap going into the skarf joint doesn't mean anything. It's not that hard if you know what you are doing. Nobody is going to do it on a run of the mill rewrap because of the work involved but it is possible. I feel confident I could do it. And no, I will not give any details about how you would do it. I read an interview with Bun once and he talked about fake BOP jazz festivals that had the wrap going into the scarf joint.

I am of the opinion that a genuine BOP Ringo spec Jazz Festival would go for around $5K to 6K.

I would never buy one based on a few pictures on an ebay auction. I would want it authenticated in person.
Click to expand...

That is interesting about people that can remove wrap out of a scarf joint and replace it. I do know that I would never spend this kind of money on a drum like this without inspecting it personally and having someone else like jack Lawton or Gary Astridge authenticate it. I still have no reason to believe that the seller is being dishonest in any way but it probably would help things if he had a few notable guys in the business weigh in after looking at it.
R

I hope many of the Ludwig technicians from the 60s are alive and well and reading....given the vintage market, they must enjoy remembering the days when to finish an order they grabbed some extra nickel or chrome hoops or a badge out of serial number order or a 5.5 shell or 5.0 shell because it had the right wrap ordered , whatever, to put together what today we look for as “one of a kind!”

Hey, if its real real, skip Maxwells and Don Dennet and take the ebay auction down and contact Sothebys or Christies! And remember if it's the real thing, someone paid 2.2Million for a Ringo kit! 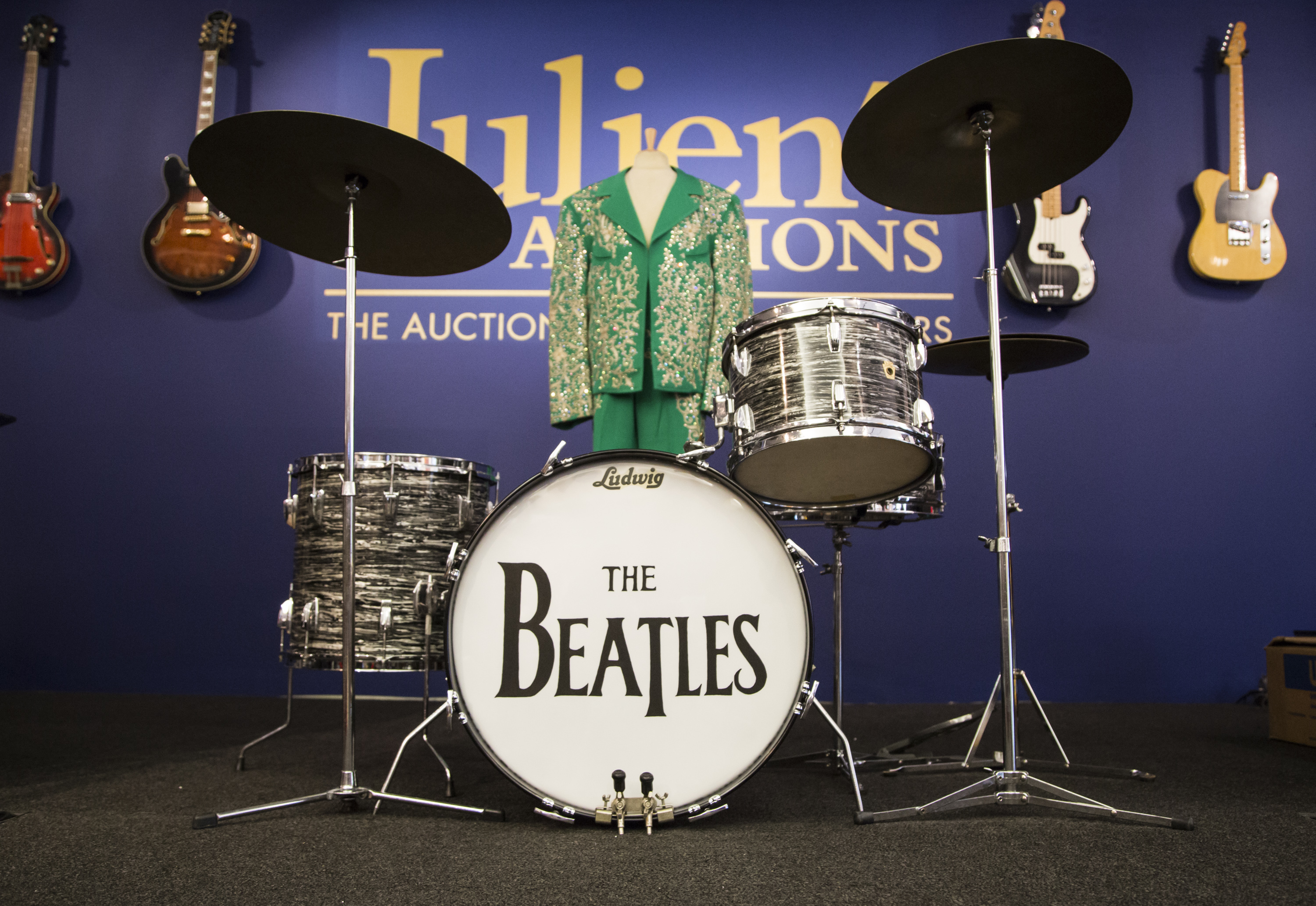 thin shell said:
I think Mr Bennett pulls the prices out thin air. His prices are ridiculous most of the time. He probably doesn't really want to sell the stuff that has the out of this world prices but would let it go if the right rich guy was willing to buy them.

i have to speak up for donn bennett, as he is a friend of mine. donn is a dealer, not a collector - it's all for sale. if you don't like the price, don't buy it. everybody owns something that someone else thinks is a crazy price.
Click to expand...

paulwells73 said:
I’m not sure everyone who is commenting understands the rarity of this drum. It is not a normal Ludwig Jazz Festival. Most Jazz Fests are 5x14 and have the badge two lugs away from the strainer. For a brief time, they were 5.5x14, and had the badge one lug away from the strainer. Also, before The Beatles became famous, Oyster Black was an extremely rare color. Even after they blew up, it was still not a particularly common color, despite their popularity.

This drum is identical to Ringo‘s snare - Oyster Black, 5.5x14, badge next to strainer, and with a date stamp only two months away from Ringo’s. There are only five drums with this exact spec known to exist in the entire world, and that includes Ringo’s own drum.

I haven’t been paying much attention to Ludwig prices lately (I’m a Gretsch guy), but I remember dealers like Bill Maley selling regular 5x14 Jazz Fests in Oyster Black for thousands of dollars. I’m pretty sure they’re valued in the range of 1920s era Black Beauties. That’s for a drum that’s similar to Ringo’s, but not exact. Maybe those prices have gone down - I don’t know. But if they haven’t, a five-figure asking price for this snare doesn’t seem too far off to me. Also, keep in mind, if Ringo’s own personal snare ever went for sale, it would EASILY fetch millions. It’s the snare heard on every single Beatles tune, the only snare he used during the band’s entire run. It’s so incredible that Ringo ended up with such an impossibly rare drum, completely by accident!
Click to expand...

I understand the rarity, but not $39k worth!

wolfereeno said:
Hey, if its real real, skip Maxwells and Don Dennet and take the ebay auction down and contact Sothebys or Christies! And remember if it's the real thing, someone paid 2.2Million for a Ringo kit!

Its not A Ringo played drum only identical to.
R

wolfereeno said:
Hey, if its real real, skip Maxwells and Don Dennet and take the ebay auction down and contact Sothebys or Christies! And remember if it's the real thing, someone paid 2.2Million for a Ringo kit!

thanks for your reply,that maybe a very good idea...
i want to thank everyone for there reply's....
with that said I'm done, i want to wish EVERYONE a happy thanksgiving and happy holidays
and that the new year brings some hope for all of us...
take care and stay safe people, our health is the most important thing we have...

My gold 1960 Super classic Ludwig transition badge was 5.5x14. Didn't have the quirkly wrong badge/muffler location, though, and someone took the "correct" throw off and added a P83 and P32 butt, which was fantastic for me as I prefer them.
Excellent condition other than 2 small holes as a result.

I actually just traded it, but I think if you look, you can find a similar 5.5x14 drum for 1/100 the price. Of course not "original" BOP, but that's fine for me. I'd rather buy and make a clone but I really wish th best for the OP and hope he gets what he's looking for with the price. I second getting Steve Maxwell and his marketing team on this......
M

ThomFloor said:
You think the Beatles were only famous for 'three years' 64-66??!
Click to expand...

I meant to say “together” rather than “famous” but even there I was wrong as I guess they were together into 1970.

It's a 1/16" of plastic wrap. Period. I laugh every time I see things like this. Who cares if "Ringo owned one just like it"? The point is, Ringo didn't own it. It's rare is the point and the price should reflect that. I own one of five know (correct me on that if I'm wrong) 14" 1968 Keystone badge Mod Orange floor toms. Should I have paid 50x what its worth just because John Desmore had one? Hell no. He DIDN'T own it. It just happens to have the same wrap he had. It's rare is the point and the market should reflect that. I think I paid a fair price for it based on what other 14" Keystone floor toms go for, and its rare. Anybody that pays more for any Ludwig drum just because Ringo owned one like it, Buddy owned one like it, Peart owned one like it, is out of their mind. I have a picture that Zak Starkey (Ringo's son) took of Keith Moon's drums (Zak's Godfather) and Ringo held the picture frame and I can prove it. Ringo had a Ludwig Keystone Oyster Black Pearl Drum set that he touched too. So all of that linked together will you give me $10,000 for the picture please? (All of my picture story is true. The picture is probably worth $100, and I was trying to make a ridiculous point). This whole wrap thing has gotten out of control. If somebody pays 50x the worth of anything just because "Somebody famous owned one just like it" deserves to have their bank account drained. SAZ 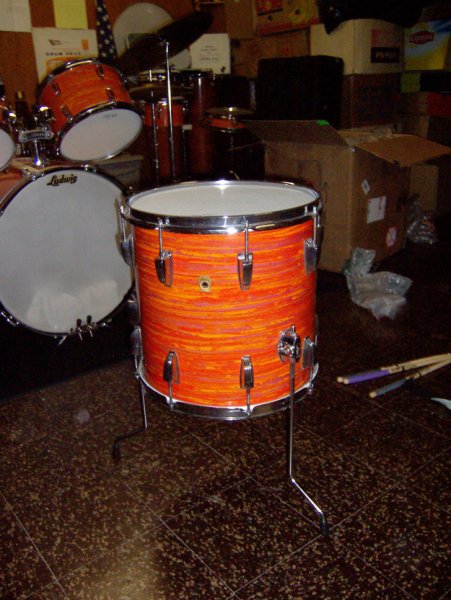 musically speaking it's not important wouldn't make a difference, who previously owned it either;
only important, very important to collectors (or so I've heard no 1st hand knowledge) , museum.ist's and Shrine-ist's.
Who owned a musical instrument prior to one acquiring it bestows no transferable benefit musically.
Absolutely zero.
One's eighth note will not change dramatically upon acquiring Philly Joe Jones or Buddy Rich's personal snare drum for example.
So we're not talking about music when in this realm. Even tho it's arguably a Musical instrument. It could be a toilet seat owned by Franklin D. Roosevelt.
The value to collector'istas would not be in how it flips up and down.
It's something more...intangible

I know everyone knows this.
I just like typing it every so often.
Like maybe oh once every two years.
Last edited: Nov 21, 2020

I think $39K takes it out of drum collector category and puts it into millionaire-who-likes-to-collect-rare-things category.

Morello Man said:
WFL II said that he gave Buddy Rich three kits a year...when he first went with the company in 1946. Flash forward to 1964. The Beatles were uber famous for what, three years - ‘64-‘66? Isn’t, at least, one question, how many kits did Ludwig give Ringo during that three year period? “Four or five known kits” indicates to me that no one knows the answer and, when establishing provenance, that seems to be a problem.
Click to expand...

Uber famous for just 3 years?? What planet are you from? 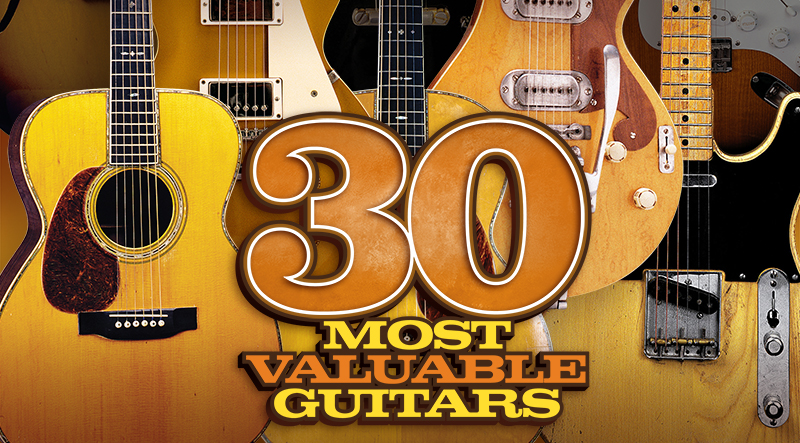 To mark VG’s 30th anniversary, we dig into the 30 most-valuable production guitars.
www.vintageguitar.com 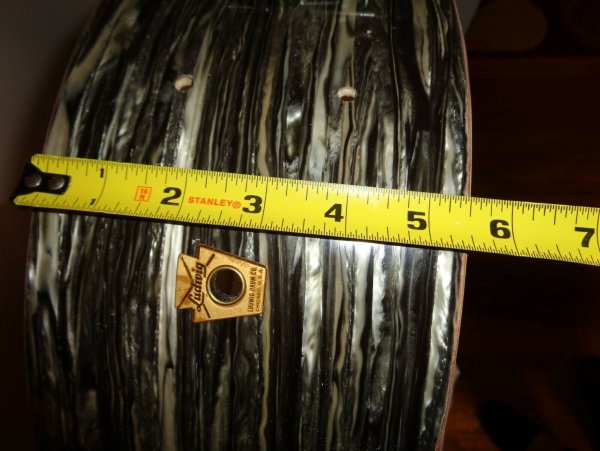 Exactly. He's holding the tape measure crooked, which would give a larger depth (in this case 5.5") than if he held it square. Notice the metal keeper end on one side isn't even contacting the shell?

Holding it at an angle does cause an inaccurate reading but that angle isn't that steep so would only be off by a 1/16" to 1/8" at the very most.
You must log in or register to reply here.