5stroke said:
(why do YT videos not show the date they were posted any more?).

I'm still seeing the date videos were posted to youtube located below the clip. The Ron Tutt video you shared above was posted in October 2018.
P

I also got to see Ronnie Tutt play with Elvis - during his second run of Vegas concerts (1970). I was 10, Elvis was incredible and Ron played marvelously.

Thinking back, I distinctly remember finding myself having a real OMG moment as I was setting up to play on that stage for the first time years and years later. I saw a lot of concerts growing up - but seeing Elvis on that stage was certainly one of the most impressive... and memorable.

EvEnStEvEn said:
I'm still seeing the date videos were posted to youtube located below the clip. The Ron Tutt video you shared above was posted in October 2018.
Click to expand...

Thanks, I see it now, my app setting hid it.

I was learning Cats Under the Stars and was really impressed by the easy groove on a song that's a bit unconventional...didn't know it was the same dude who was kicking E in the butt back in the 70s and was with Neil Diamond.

He has such an easy way of being in command, really love his way of playing. I'll always remember him behind those double-bass, blue sparkle, Ludwigs. What a driving force he was! Loved his playing. Really sorry to hear of his passing.

Last March there was a thread here,

In the thread I told my story about watching that live concert with my girlfriend and her family when I was a young teen, and then later seeing Elvis in concert with her and her family. The band impressed me, and since I was a drummer, it is fair to say that Ron Tutt influenced me from those two performances.

"Another one of my long posts, my apologies in advance.

In the spring of 1973 I was fourteen and had my first steady girlfriend. I was already a music geek, but not particularly an Elvis fan. Mary's mom was probably born in 1940, and really loved Elvis as most girls who were sixteen in 1956 did.

I was invited over to their house to watch the special, since I was an aspiring "musician". Her parents had a party. My girlfriend Mary was their oldest daughter, her family treated me like family. I remember her mom and her friends in their early thirties shrieking like schoolgirls during the concert. Mary was embarrassed, but I thought that it was fun. There must have been over twenty people squished into their living room to watch the concert on their 25" console TV. My girlfriend sat in my lap for the whole concert, snuggled up in a beanbag chair, I thought that it was awesome! lol.

As for the the concert itself, I remember liking it a lot more than I thought that I would.

Mary and I were no longer going steady, but still dated on and off through high school, and beyond until I moved to Florida in 1979. (We both graduated from different high schools in 1977.)

In the fall of 1976 Mary called me. Elvis was performing at the Pittsburgh Civic Arena on New Years Eve. Her mom got tickets for the show, and had tickets for Mary and I as well. Her mom and all of her mom's friends from the party, their husbands, Mary and I attended. (Along with 16,000 or so others.)

Mary and I went to dinner with her parents and their posse before the concert. At age seventeen it was the first time that I went out with adults and was treated as an adult. I remember every detail from that night nearly forty-five years later.

Elvis and his band were really on that night, put on a hell of a show. It was one of those magic nights. As it turned out, this was his last new years eve, Elvis passed away the following August. I think that there is a video of that concert available, I know that there is an audio recording of it. Many Elvis fans consider it his last great show.

It also was the last time that I was not gigging myself on New Years Eve for many, many years.

Although we rarely see each other, Mary and I are still friends all these years later.

Another memory popped into my head that ties into this. In the 1990s I was back in Pittsburgh for a few years, and was playing in an oldies band. Mary, her husband, her sisters, their husbands, and her parents came out to see us play one night. We played an Elvis medley and dedicated it to Mary's mom, saying that she was the greatest Elvis fan that I'd ever met. (And she was.) She thought that it was the coolest thing. I ran into one of the sisters at a pizza shop last year and she said that her mom brought that up any time that my name came up for the rest of her life. It was a big deal to her that I thought of her and called her out. Honestly, I can't ever hear Elvis without thinking of that family all these years later."

I just found out Ronnie Tutt played on some of the Buckingham Nicks album, along with Hoppy Hodges and Jim Keltner, BUT I have not been able to find out which songs he actually played on. Anyone know?

Damn that sucks, another legend leaves us.

His solo from the December 13, 1975 Las Vegas midnight show is kickass.

He played on the whole Cher album Gypsies, Tramps and Thieves, including the title track.

bcrain said:
I just found out Ronnie Tutt played on some of the Buckingham Nicks album, along with Hoppy Hodges and Jim Keltner, BUT I have not been able to find out which songs he actually played on. Anyone know?
Click to expand...

He also played on some of Gram Parsons' final solo albums too. "GP" and "Grievous Angel"

RIP, probably one of my earliest influences (apart from Ringo) without me knowing it. My parents listened to Elvis and Neil Diamond when I was a kid.

September 1970, when he first got the legendary blue sparkle Ludwig kit on the scene. No concert toms at this point, and the bass drums were a mix of 22 and 24 inchers. The 22 would later be replaced with another 24.

I did a deep dive on Discogs, he played on a lot of great tracks. He was a great rock drummer who was also really creative and intentional. Love his fills and time, with quite a light touch for a rocker.

With the Jerry Garcia Band, in October 1975.

A kit better suited for this gig, as I think the chrome over Vistalite double bass kit he was using at the same time with Elvis would have been mega overkill...

Come to think of it, this was one of his kits he used for recording sessions. I read somewhere that he had Ludwig supply him with two identical Thermogloss Maple kits just for that, in similar sizes to the blue sparkle kit. 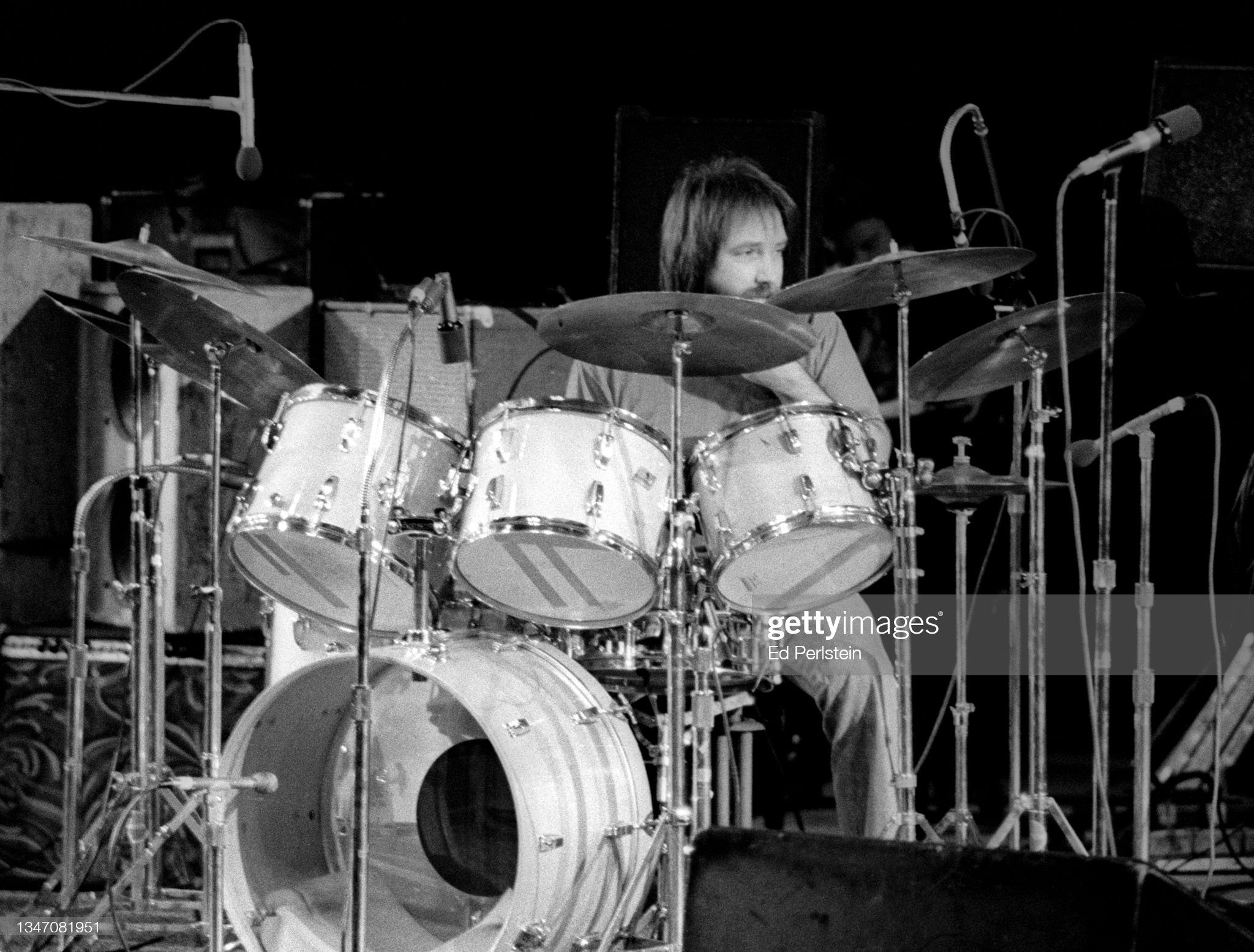 Elvis hated the sound of the Vista, hose clamps, T for Tutt tape and more stories on the COA…. chrome over acrylic

Elvis and the Teardrops