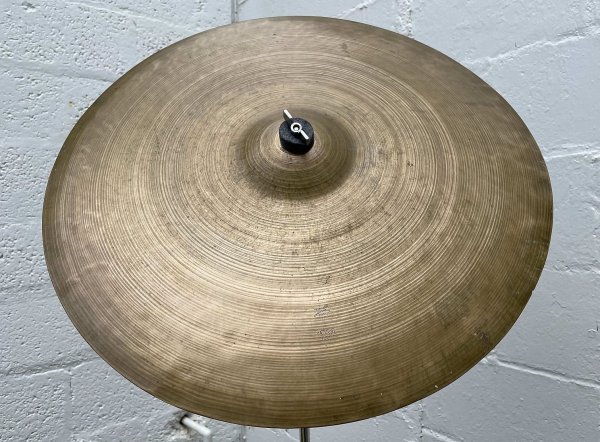 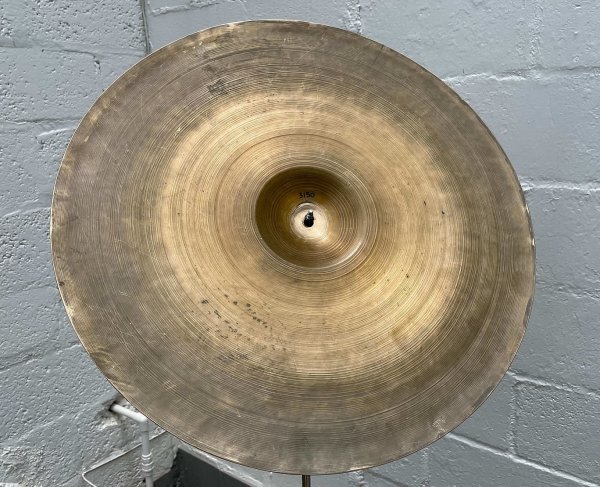 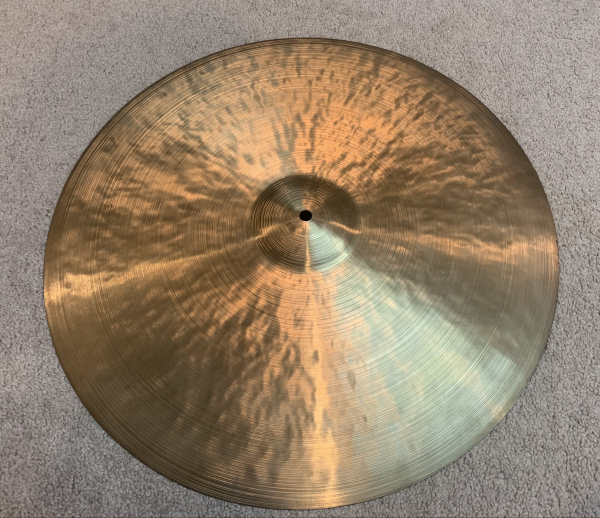 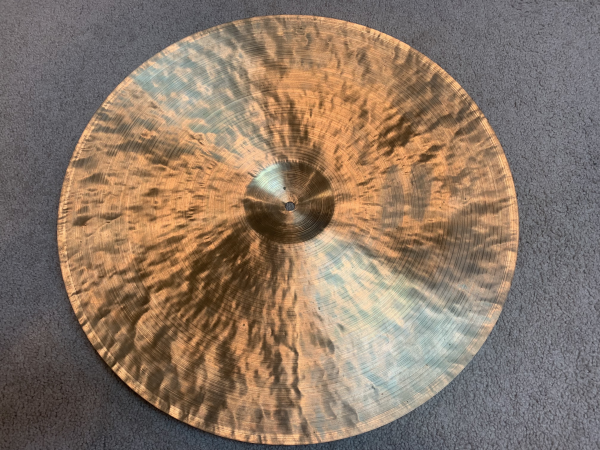 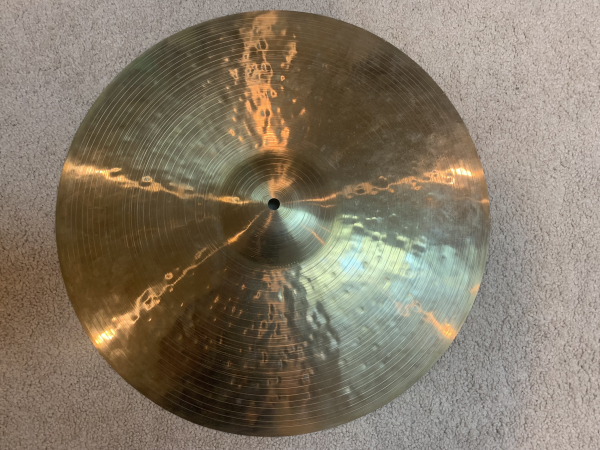 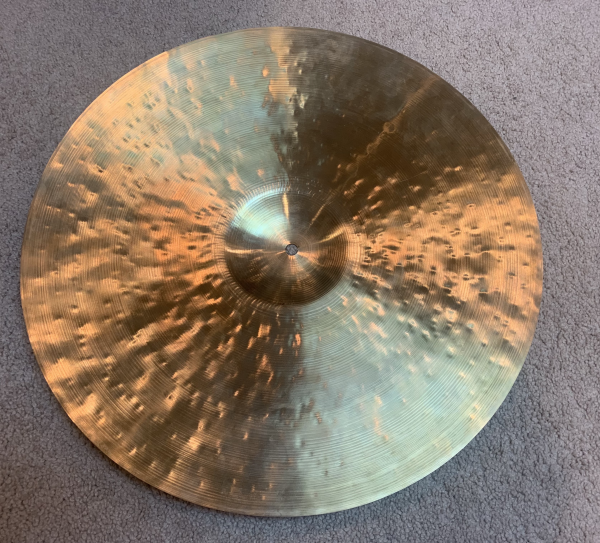 Old Ks in their natural habitat 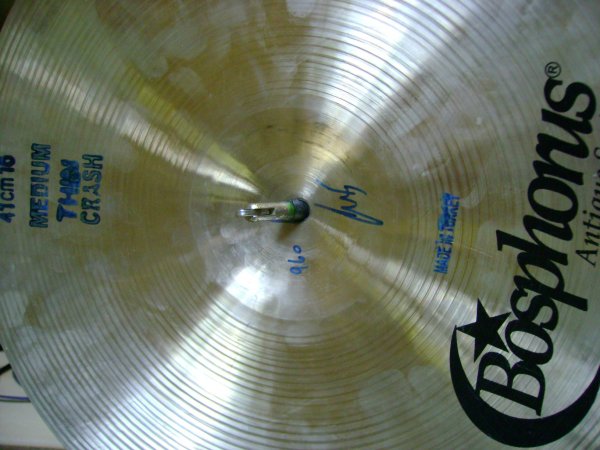 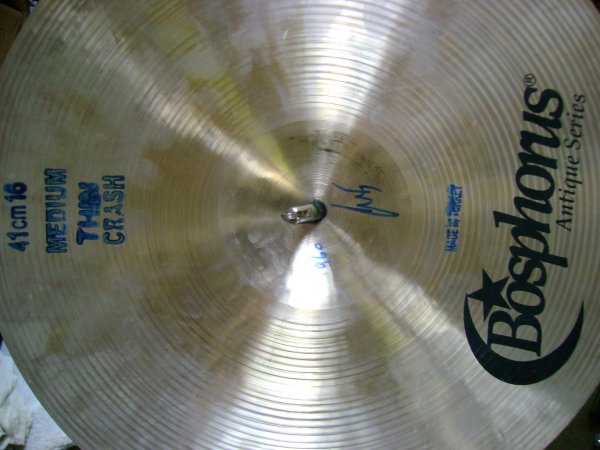 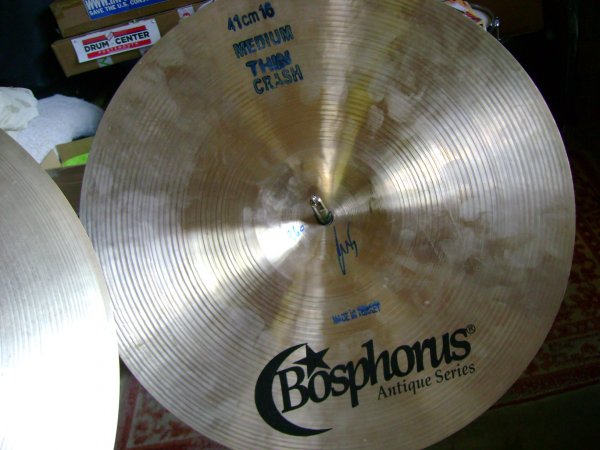 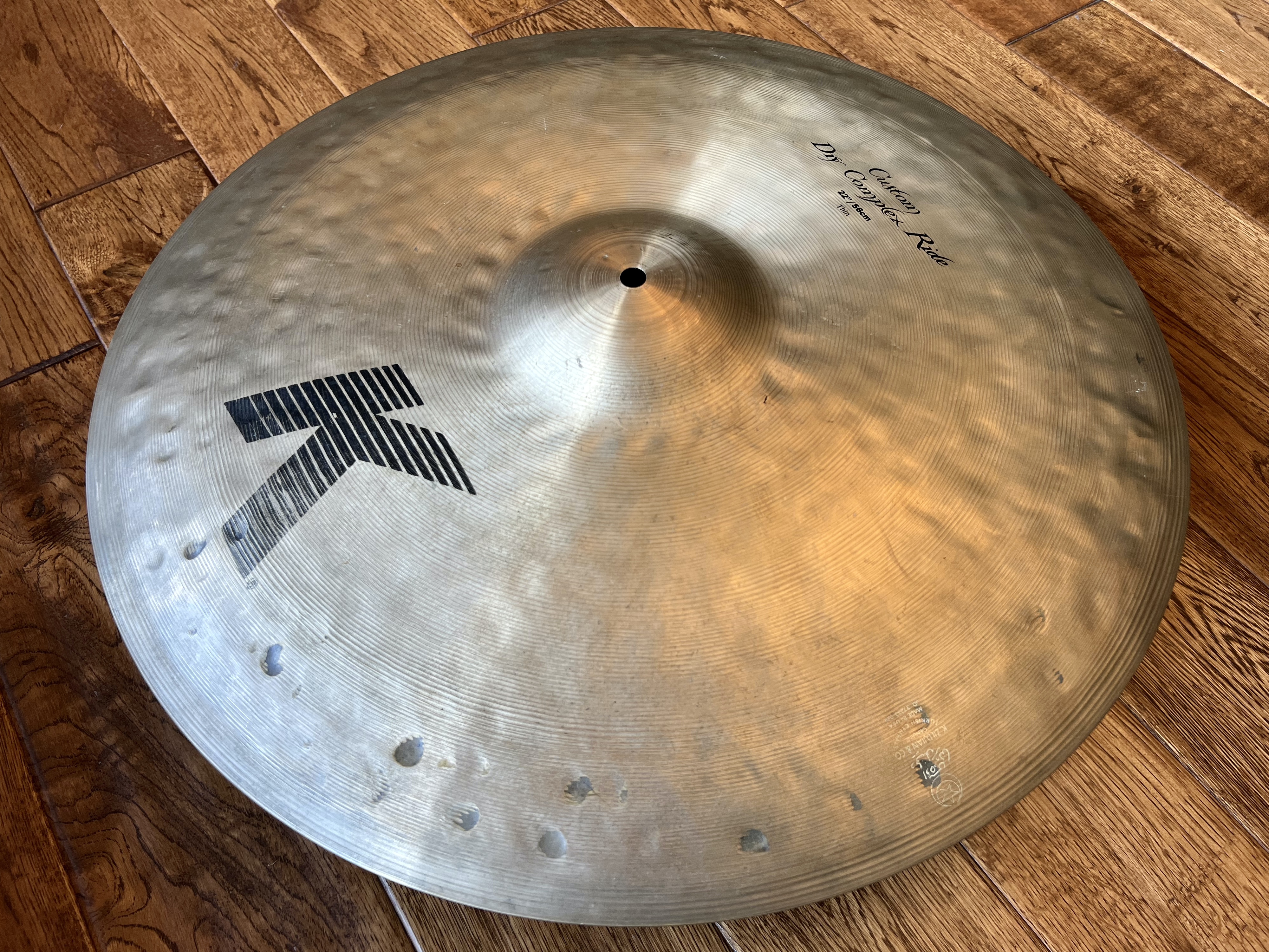 New Nolan 24" Swish. I figured I put it in every other thread on the forum, might as well put it here, too. 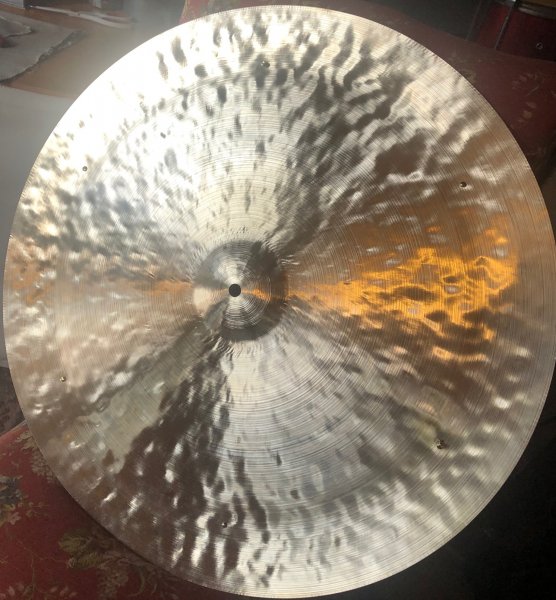 Im usually terrible at cymbal photos, but this one came out pretty sexy. I give all the credit to the fact that its an old A (22" TS 2354 g) 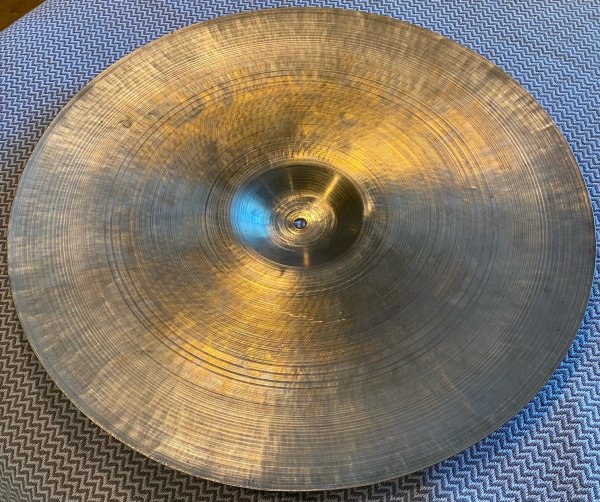 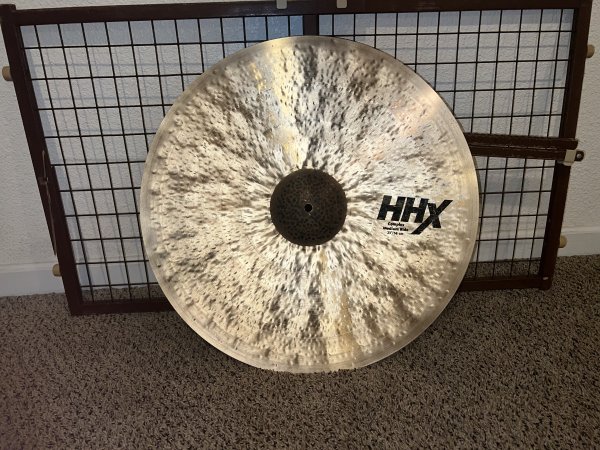 The underside of a Trans Stamp type 3. 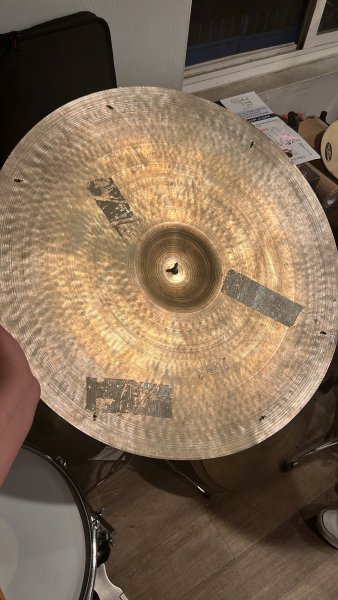 If only she was holding a Zildjian …. sorry couldn’t resist .

DBT said:
If only she was holding a Zildjian …. sorry couldn’t resist .
Click to expand...

screw the cymbal.... i wish she was holding ME!

here's a pic of my bandroom in 99-01 many years pre-Michael.
this is probably in the late 90s i started seeing how easily and cheap Paiste's were availabe on Ebay, so i began collecting them picking up on good deals on Paiste's and/or sought after paistes, cleaning them up and selling and making a profit. It also gave me a chance to try out the endless sizes wieght and styles of Paiste's which being a cymbalholic was very undoable in light of where I lived, in mexico beach florida, a short 20mile ride to Panama City, i moved to florida in 71 at 12yrs old. PC as we called it had 2 music stores and Zildjians were all you had to choose from
OR
late 70s early 80s 1 or sometimes both of the only 2 music stores in PC always seemed to have 1 paiste red label 2oo2 20" ride and that was a drummers life in PC for the next 25yrs or so.
it was when i got hold of the 2nd edition of Paiste's artist catalog given away for free at B+H music that i started seeing nearly all of my fav drummers and their cymbals I loved the sound of like paice, bonham,carl palmer were playing Paiste cymbals. but the sad fact of why the 2 music stores in PC only had 1 paiste cymbal displayed boiled down to the simple financial reason of cost/profit. paiste was a fair amount higher and more profit was made on Z's. it wasn't till 1 nite coming home i dropped by a club on the way home to catcht a few sets of a band playing i was enlightened with a very eye opening or i should say ear opening experience.
the drummer had probably 4 crashes BUT one stood out dramatically, Way more apart from the other cymbals, it was like a difference I'd never heard B4, a smaller crash from the others, but the sound was amazing and completely different from the others. it easily cut thru the mix unlike the others and stood completely apart from all the other cymbals which sounded dull compared to this particular crash, it also seemed to have a musicality of its own to it that blended with-n-complimented the music the rest of the band was playing.
so i ordered another drink and I was going NO WHERE til the band finished its set and i talked to that drummer about what that crash was! he said the same thing about his new cymbal and how he heard it like i did, a brand he never played before his new found 16" paiste 2oo2 crash.. this was sometime in the late 70s, thru the years everytime i heard a live band who's drummer that I uknowingly was playing paiste cymbal mixed with *other* brands the same thing has happened Every Time, i remember seeing a small 3 pc band playing outside and the drummer had a smaller beat to hell ride that didn't have a bell! with such a BIG chunk broken out of it it seemed impossible that it could make any kind of sound worth listening to!! but the sound coming from it just stood apart from his other whole "good" ride cymbal **markedly/nite-n-day difference** amazing was all i could think of that such a delicate sound coming from such a busted up ride that produced a defined very lite airy ping sounding like effervescing champange bubbles sparkling rising up then bursting with a musicality of its own blending, complimenting the music it accompanied, once again going nowhere till i found out what cymabl made that sound,
waiting til the 15min break after their set the drummer told me it he didn't know the brand only knew the stamped blue ink said it was a Formula 602 I finally learned It was a Paiste 602 blue label 18" flat ride.. a Paiste. its only when ive heard a bands drummer playing other brands of cymbals and a paiste in the mix have i heard such a difference, another time its was a RUDE 20"crashride a drummer friend of mine had and offered to let me borrow telling me how good it was, I jumped on the oppourtunity, after hearing of paiste RUDE line was out and drummers like my latest idol stewart copeland was using. we were playing that weekend so i had a friend video taped our nite with a VHS video camera and the sound coming from that rude was absolutely amazing and unexpeccted, coming from an 80s vhs cam and the sound of such recordings were always notoriously BAD, guitars always sounding overdriven, with drums and cymbals muffled sounding buried in the mix BUT this rude just cleanly sparkled next to my 21" Zildjian rock ride and crashes, almost sounding as if it were professionaly mixed at muscle shoals apart from the handheld VHS- Cam... this said i was a Zildjian man since i started playing at around 8yrs old, listening to my brothers band in the garage in the early 60s the drummer Ronny played zildjian and every drummer you heard anywhere from the radio to playing at the roller rink every weekend played zildjian cymbals, that was the gold standard and for many drummers I admire today still is. 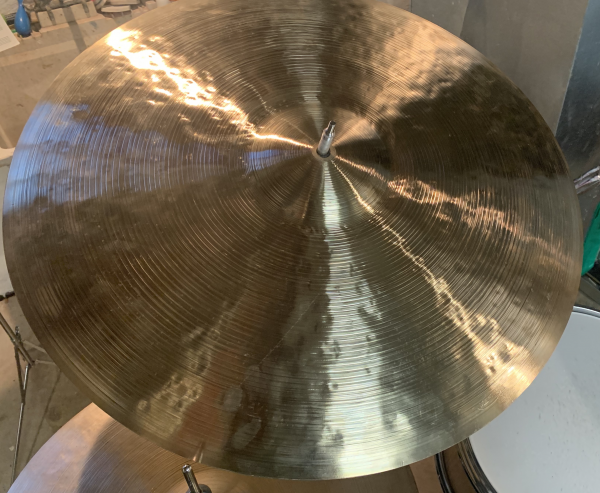 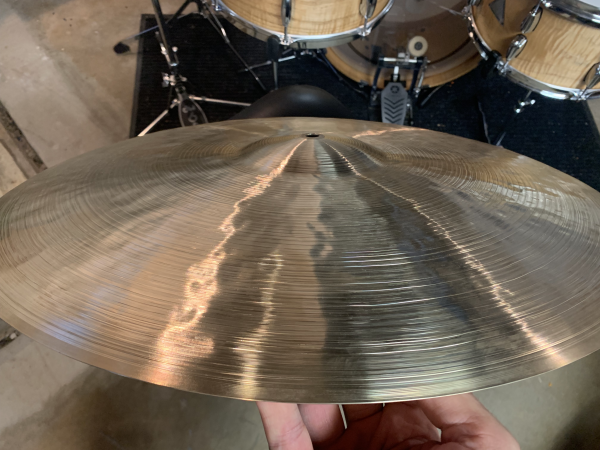 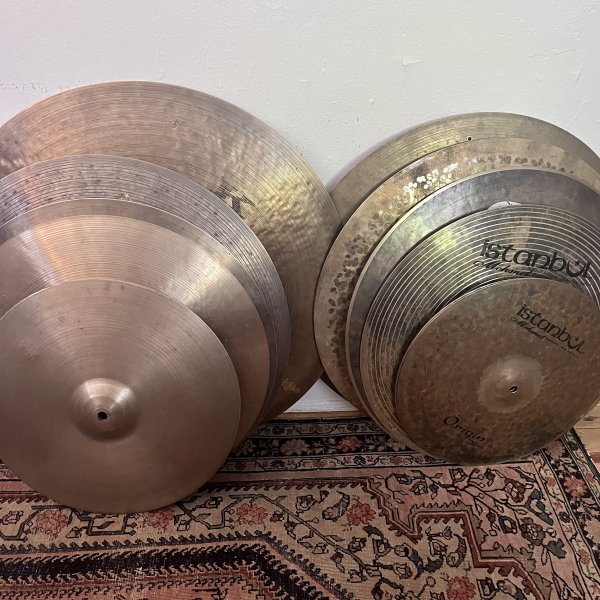 I was setting up a little 4 piece practice combo in between rehearsals/shows and thought this AAX Freq ride made for a good B/W photo op.

22" F.Madejski 2528 gr in a morning sunlight. The details of the hammering shows nicely. Great cymbal, relatively high profile and tension. 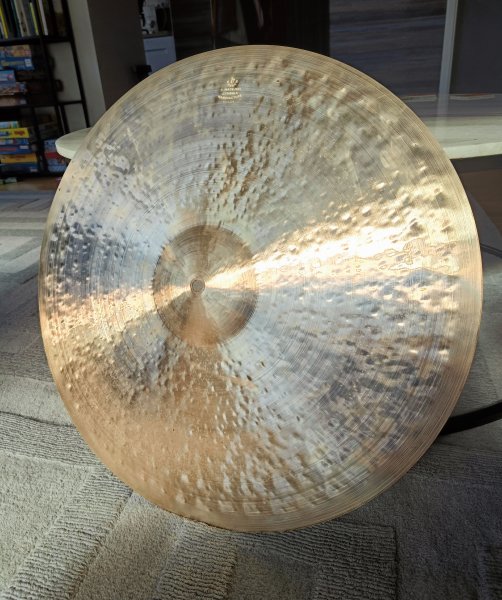 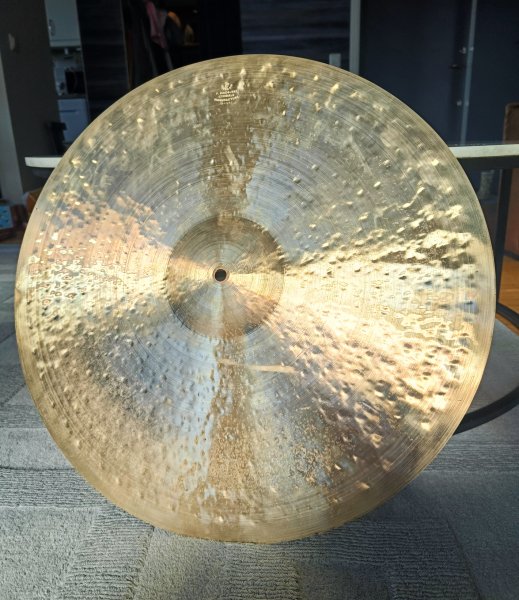 The measuring tape in the way doesnt help, but the lighting on this Zilco came out artier than intended 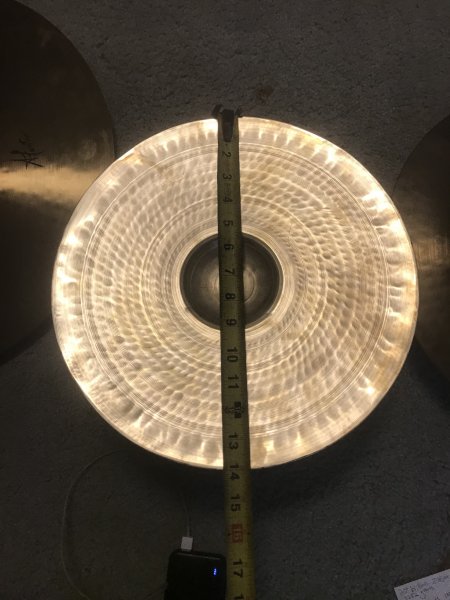 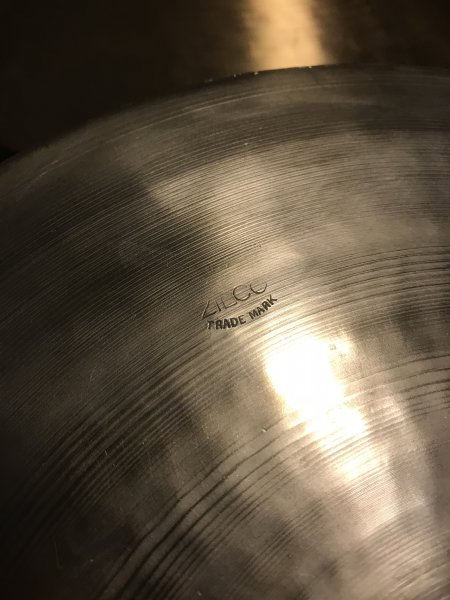 The more the merry...