Show Us Your Rides

This week I pulled apart the drum room for some cleaning, and decided to take a few pix. Here are a few cymbals (rides included,) all Paiste.

And here's a good money shot (sorry, I know you asked for just ride cymbals, but there is a few snare drums in this shot too.) 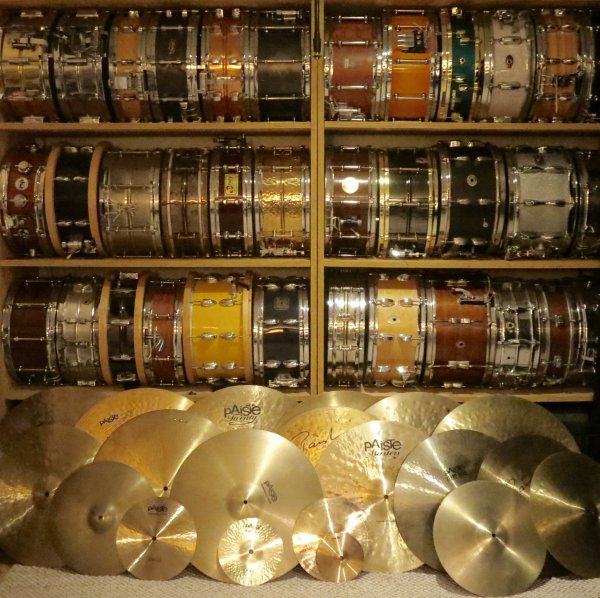 whats your favorite from that bunch ?

Woah. What kind of music do you play? Tell us more about the set up! 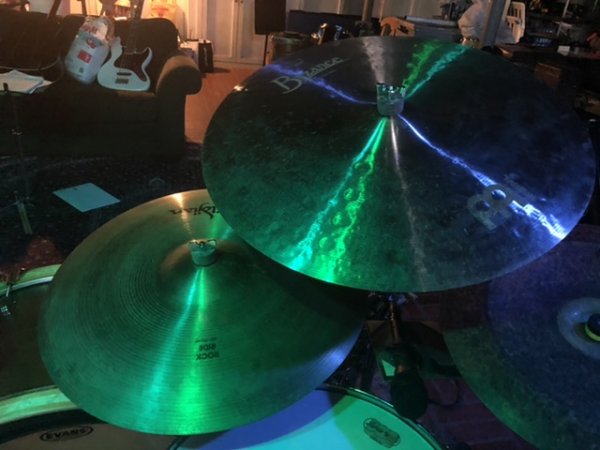 michaelg said:
whats your favorite from that bunch ?
Click to expand...

Truthfully I never really think in terms of "favorite." I don't own anything that I don't absolutely LOVE! I sold off all my "likes" years ago. I just think in terms of what's best for the gig, song, room, musical context, or situation.

I follow those (self imposed) rules for the drum set, snares and cymbals. Band leaders like it, and I sort of do too. I've had most of my instruments for a long while, so I really "know" them. I really enjoy putting together "the right instrument" for me, for the gig.

However, I'm not opposed to occasionally taking a "perfectly inappropriate" (to me) sound to a gig as well, to mix things up, and inspire some musical experimentation and creativity.

If that's the one that you got from me ( I think it is)....I must have played 15-20 before picking that one for you. It really sounded nice. I just kept going back to it.

mlayton said:
If that's the one that you got from me ( I think it is)....I must have played 15-20 before picking that one for you. It really sounded nice. I just kept going back to it.

Yes it was,,, you have good taste in cymbals!

Ludwigboy said:
Yes it was,,, you have good taste in cymbals!
Click to expand...

Thank you Chris. Those late 50's Small Stamps are so versatile. Fine cymbals.

Two recent discs, in addition to those arrayed at the beginning of this thread: A Zildjian Uptown Ride and a 20” K Flat (denuded of any ink or markings).
In many ways these fill some gaps in my pack of sled dogs. Until their arrival, I’ve had neither an 18 nor a flat. My other rides work well in medium to loud situations, and these are, I suppose, betrothed to the more subtle gatherings. I think I may be done for a while…at least done until this Qovid Quarantine is over and I start playing with bands again.

I need to explore these in applications other than the shed. I feel that along with the others, more or less, I now have a different ride available for the sorts of situations I find myself in.

So I’m telling myself. 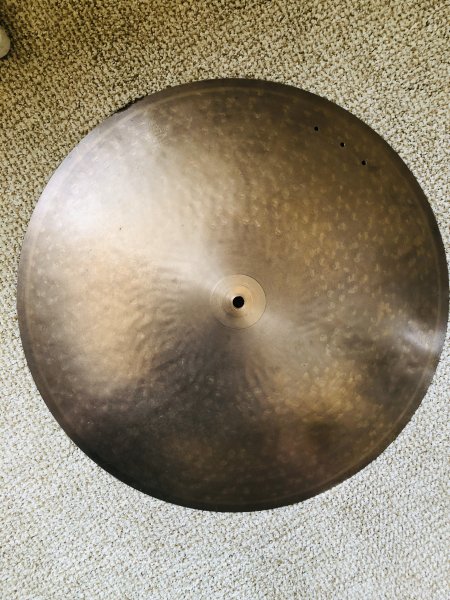 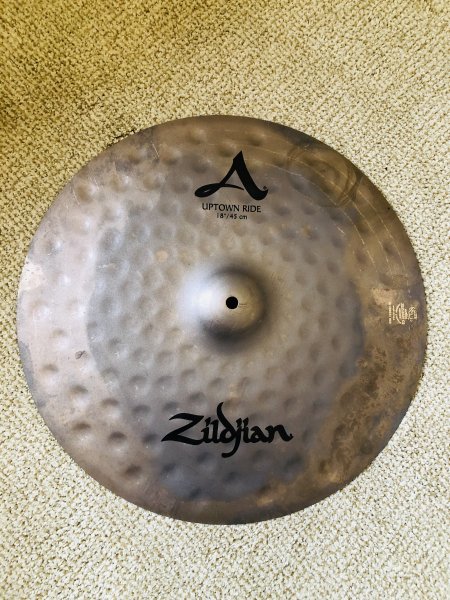 I can attest to the 20" K Flat. Very nice.
I have yet to try an Uptown ride, but all reports are favourable.
Congrats on your latest grabs, CC.

Quite a few changes for me since my picture in July. I've sold a bunch off and acquired a few more. Thankfully sold way more than acquired. 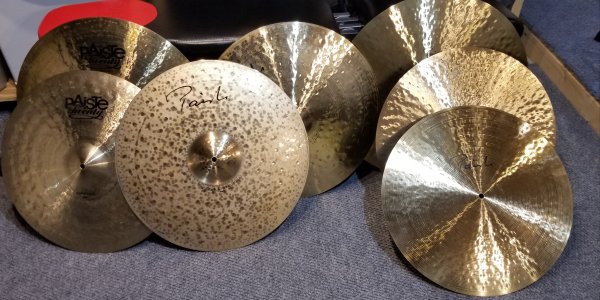 Here's a few for you:

The Ludwig Paiste is a serious, noteworthy mention. Beautifully bright, shimmery, and excellent stick contact with crashes that climax and quickly subdue...perfect for switching to the bridge. Exquisitely, the yin to the yang. 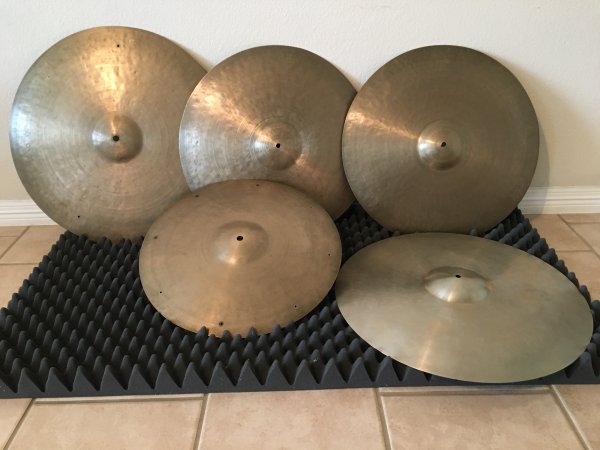 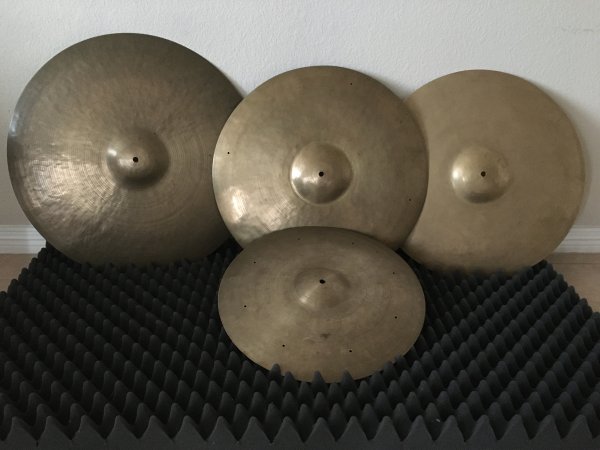 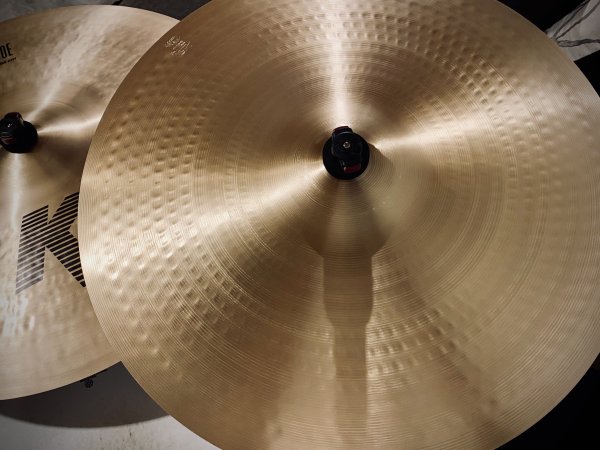 Nice.
What’s your opinion of the Take Five?

it’s a beautiful ride, and not only to look at... I had posted this on another thread regarding these: “Compared to the 22” K its sitting next to it’s obviously brighter, a bit less stick definition, a nice wash that builds very easily, and very very crashable. I’ve had a few different 50’s/60’s A’s, none in this size but... it’s brighter than what I remember my others being but that’s not necessarily surprising given it’s aim and it’s age.”

that initial assessment still holds true. It’s got a beautiful crash to it (which I think is my favorite part) and the overall tone is bright without being harsh. I wouldn’t say it sounds ‘broken in’ but it’s not too ‘new’ sounding either, if that makes any sense. The other vintage A’s I had were 22’s and 24’s so its obviously a bit brighter in tone, but still has that classic old A sound I remember... just a little cleaner... plus, honestly, I just love looking at it when I play it... I just think the hammering and overall appearance is beautiful and inspiring to play. And that counts for something as well!

And a couple of 18" Type I light ones. Both at around ~1200g. I believe that they are the original rivets on the right. 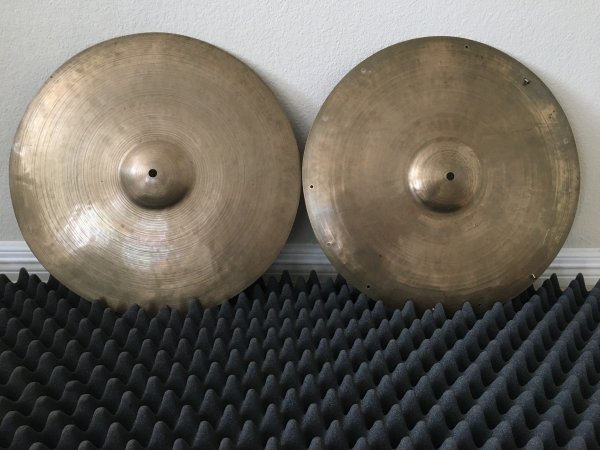 I'm too lazy to take pics of them, they all are round and have a hole the middle, and a couple of them are "raw". They weigh something as well....

Sabian
18" flat ride, 20" Jack DeJonnette Encore, 20" AA Raw ride, 22" Dave Weckl ride with a huge chunk out of it.....got this one from the "trash" bin at a reh studio in the city for free.
Zildjian
20" Rock ride, 20" A flat ride, 20" Pang ride, 17" medium crash which can be used as a ride.
Dream
20" Bliss, 20" Vintage Bliss crash/ride, 22" Bliss crash/ride
Camber
19" crash/ride that was given to me......I gave it away, with a quasi beater stand, to a person who only had a crash a couple of weeks ago.
There are a few that have come and gone over the years as well....20" Zildjian Ping, 20" Zildjian Z, 22" Dream Contact, 22" Zilco......this was gifted to a Taiko group who I used to work with a bunch.
Even though I tour(ed) with a set of cymbals in Eastern Europe/Baltics/Russia a few times....there seemed to be a bunch of no named or forgotten named Turkish cymbals provided with the kits....that were just killer cymbals...so if it was ok I would use those instead of mine for that performance if they worked for the music. I came close to doing some trades or acquisitions but the equipment manifest would have had to be altered. Russian border guards would not have been amused as they scrutinized everything....in between smoke breaks when they shut the border down....ya had to have been there....scary and funny at the same time.
bt
Last edited: Nov 16, 2020
You must log in or register to reply here.

I may not want my grail ride anymore??!!!