One of the coolest festivals my 11 y.o. kid's band plays is called West End Art Celebration in Sand City, CA. Lots of bands, stages, vendors, etc. Just a cool, chill vibe. I am the house drummer and volunteer for my son's non-profit acoustic group, called Guitars Not Guns (which my 7 y.o. likes to refer to as "Guitars NOT DRUMS, dad!"....the little brat that he is!), which is the main benefactor of the proceeds of the 2 day event.

So I recently score a lovely WMP 1968 Ludwig Super classic 13/16/22 and painstakingly cleaned it up down to the washers and springs. All was done except the batter hoop (which is rough looking but solid). I did a post earlier but I was super excited to premiere the kit along with a 20's Black Beauty. I gigged in April with a modern 6.5 bronze Supra and it was amazing so that was my backup snare, and I recently rewrapped a Jazz Fest in WMP which almost matches the kit perfectly (wrap came from a donor MIJ snare). However, as part of my pre-gig, night before, butterflys in stomach, nervous wreck routine, I could not choose between the 3 snares. Since we were also playing a 3 hour side stage gig in addition to opening the festival on the main stage, and I knew I'd be wandering around, I opted to not take the B.B. The Jazz Fest sounds fat but I was worried it would not project (main stage was miked, side wasn't). So I went back to my old faithful and took the Bronze. I had to park a few blocks away and make 2 trips, and it's now getting hot and sunny (like 70's). I am sweating as I arrive backstage and then get a text from the main teacher - "oh, btw, you don't need to bring drums" - WTF??? Ugh, the dreaded house set! Last year, I set up my DW kit (12/14/1

and it was awesome. A Nashville drummer with his DW set came up and gave me a compliment and I felt like a pro!

This year, I was ready to go and now was dejected - "but I am already here!" So then she says the 2nd stage is near an art gallery presentation and it would be best to NOT bring in the bass, and maybe just a snare! What??? So I figure I'll bring the snare, my 16FT (but no riser!) and the 13" tom just in case I have an extra snare stand in my 80+ rolling back of HEAVY metal hardware. I call the 7 y.o. and direct him into my home workshop and pray he can find a Dixson riser behind a bunch of drums near the window - and Lil' Sherlock finds it....sweet!

As for the kit, it is 15 minutes to show time and it's sitting in cases - I am in full panic mode! What is it, do they have time to set it up, tune it, mike it, etc??? They pulled it out and it's a mix of Yamaha maple and birch custom absolutes. I think the snare/12/bass (20) were maple and the 2 FT's (14/16) were birch - I don't recall. The pedal was a Tama and HH a DW 5000. The cymbals were all Zildjian A's from the 90's or early 00's - a heavy 20" ride, left crash a thin 16" and right crash a heavy 18", and all sound like crap! Hats were 14" new beats and fine. 3 guys are frantically setting it up and play it - they sound awful! They need a drum key and I give it to them. Out front, it was set of cardboard boxes, the 12/16 were horrible, but the 14 was nice and the bass thumped. Snare was over tightened and choked to death. The guy started tuning only the top heads and I had to step in and show him that you can't have loose tops & tight bottoms (maybe desired under different circumstances but that's a whole 'nuther post!). I had to step in and roadie for myself and suddenly the kit comes alive. Sound amazing in front. Sounds okay from behind. I had to adjust the snares but got it okay. The best part was the Roc -N-Soc with the back rest - never played one (I have 2 RNS but no back rest) - what a difference! Great support and I really felt good - I need to get me one!

By now it's 11:10, and they are saying they are behind and need TEN more minutes! Thus, we need to cut songs (we have 9 dropping to 6). We finally get onstage and we were able to play 6 songs. Wipeout to open - and I barely have warmed but we nailed it and I didn't flub the classic beat like I did at the Blues Fest. Lion Sleeps Tonight - I do like a half time shuffle with a reggae feel (I used to be a bassist in a reggae band and can do that all day long!). Nailed. Riptide - a modern song - I play with bass on 1/3 and HH chick on 2/4, a stick click on 2 and a tambourine on my thigh at 4. I then do some double time tambo and then convert to quad time tambo and snare......great. Another song - Hideaway by Grace Vanderwall - I have no clue how to play it! I just wing it and it was okay at best. Bang the Drum is next - my dude sings his heart out and we killed it! Best version in 2 years by far, and the oldest "kid" in the group is 16 and plays an electric solo and we nailed it! We close with This Land is Your Land - a crowd favorite - everyone sings along with the kids - and just like that, it's over. I didn't get announced as the drummer in the band - I have told her I am not a real teacher and don't want the credit - but a few of my coworkers wondered why I was omitted - whatever.

One annoying thing was that I had a stage monitor just to my left that was not very loud - I could not get the sound so I could hear. I am sitting behind 20+ people so the front monitors are drowned out and this is an issue which is why I recently picked up an IEM setup. I set up my recording device (Tascam something) and plugged in my monitors into a preamp fed by the Tascam, but all I got was a loud popping sound so I aborted the setup at the last second. I was missing a wire and had to splice 2 wires right before using electrical tape & duct tape (of course!) and maybe that MacGuyver maneuver failed...not sure. At home, it worked just fine but of course, I had the right wire. My sticks were Steve Gadd black with white nylon tips.

Once that was over, we moved over to our side stage and started about 12:45 p.m. They were doing mostly acoustic solo stuff, and I got to sit on on some songs I had never heard of - totally winging it. I butchered one, and then another girl sang Riptide and I totally screwed it up! I actually walked off the "stage" after (really, just a canopy set up) and was

ed with myself. After the girls finished, Alex came up and did a few numbers. I then sat in with him and we jammed about an hour - SRV (Cold Shot, Pride & Joy), Santana (Black Magic Woman), Hendrix (Hey Joe, Purple Haze), John Mayer (Gravity and some other song - I didn't know either!), Bill Withers' Ain't No Sunshine, and some blues/funk instrumentals. That was an amazing set! Just a guitar and drums. I tried to lay back to show off his skills but we played off each other and jammed hard during solos and stuff.......it was just awesome! What was interesting was that the art show people were totally cool with full drums. I actually brought the bass and set up the full kit because across the way was a band in a garage (the whole thing is a weird setup) that was a bass, acoustic guitar/singer, electric guitar and a drummer with a sparkle blue Rogers 20" bass, Powertone (8 lug) blue snare, and only a HH - NOTHING ELSE! And they are playing Dead covers and nailing them! In between breaks, I was watching them and they busted out some Stones, too! I think I know the drummer from other local bands...... 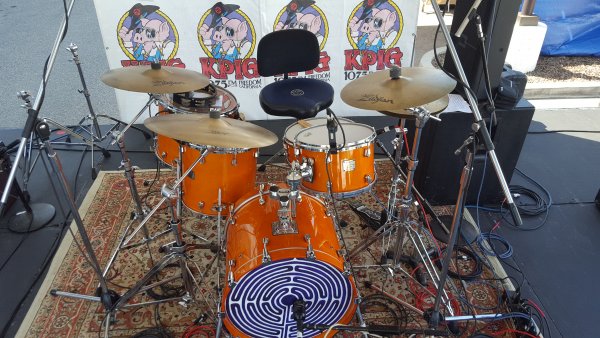 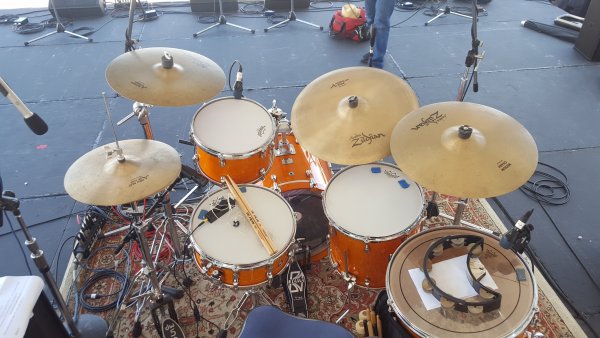 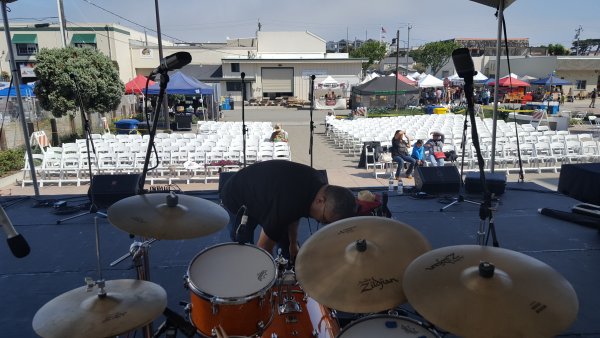 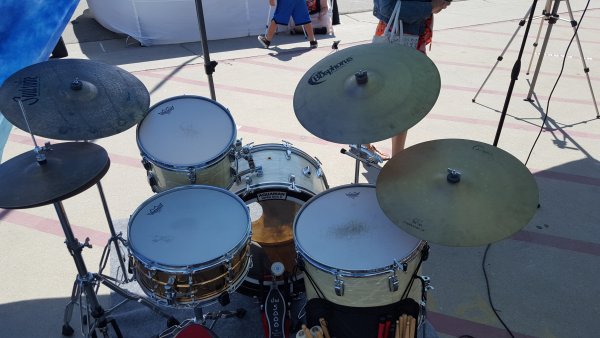 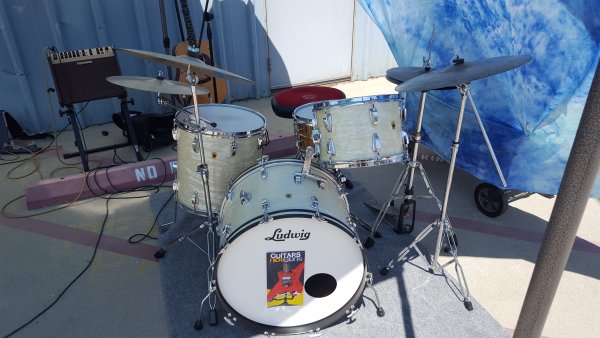 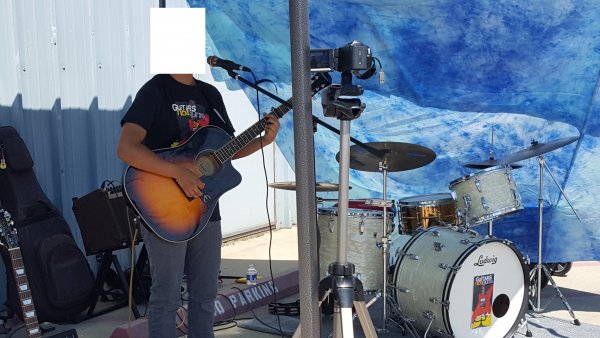 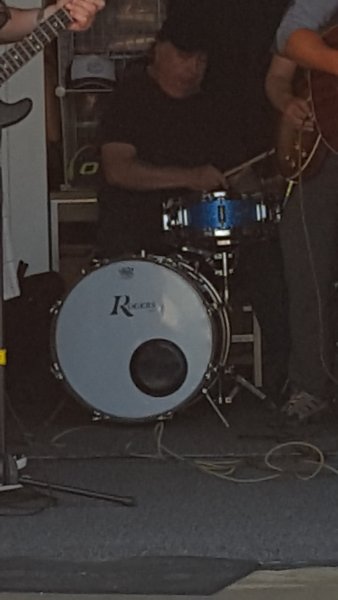