SOLD Have for sale a box of Ludwig parts.
There are 3 modern Ludwig floor tom mounts with gaskets, mount screws and back plates. Two were missing the wing nuts, so there are generic one on them.
These, other than the two wing nuts, look new and may never have been on a drum.

There are 3 used older mounts, in fair to good condition. One has that oversize nut, one a wing nut, and one a generic wing nut.
There are 4 back plates but no mount screws.
There's a complete double tom mount that's in good shape. It has two aftermarket long nuts that use the same size wrench as the Ludwig.
There's a double tom mount missing one side.
There's a piece from a Ludwig rail mount.

There's a bass drum mount for a tom holder complete with mount screws.
There's also an extra inside piece for a tom mount and another generic wing nut.
Will sell all of the above as shown in the pictures for $100 plus shipping. Going to try and sell the lot before I part out 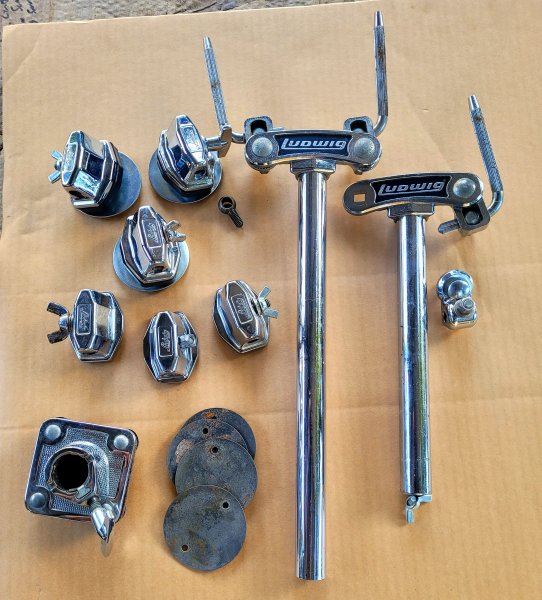 Oh, man. I'd have been on this like stink on a monkey.

Good buy to whoever jumped.

Dang it. Looks like I picked the wrong day take an early lunch!
You must log in or register to reply here.

Emperors and Diplomats; not aristocracy lol!