Late last year had only just finished restoring an early 80's Imperialstar and was driving to a different city for a bunch of rehearsals when (through my own fault) lost control of my poor car at open road speed (maybe 110kms per hour) and rolled a few times. Was somehow uninjured apart from glass cuts, but some of the drums - along with the hardware bag - went flying - a rack tom was about 20 metres away and took a bit of finding. It was all in pretty cheap soft-bags, although a brand new set of Paiste's were in a hard case, and stayed with the car. Amazingly, nothing - nothing - was damaged (although a floor tom wingnut is now a bit tight, but still works. The car was wrecked obviously). The drums were still in tune! Nothing out of round, broken or bent. Amazingly lucky.

Got me thinking - who else has had a near drum-death experience, and the gear has lived to tell the tale??

The only other one I've got is when a cymbal stand fell over on a gig and the cymbal sliced through a power cable, which blew the fuses on an amp. The cymbal cracked a few months later though, so its life was adversely truncated by the incident, and therefore doesn't really count for this thread. I think the amp got fixed.

Between 1973 and 1977 the drumset in the photo below survived the following without a scratch:

• Our roadies crashing our equipment truck (a rental; the one we owned was being repaired) into a tree at 50mph while driving home after a gig. (They both had fallen asleep.) Neither roadie was injured at all, but the truck was completely totaled — the engine and transmission were in the passenger seat. When we finally got our gear back to our home base all of my drums, cymbals, hardware and gong were A-OK.

• A (different) roadie rolling our (nearly brand-new) equipment truck into a ditch while reaching for a spoon so he could eat his yogurt while driving. The front corner of the top of the van box ripped open, expelling fibre drum cases into the ditch. After they gathered it all back up and got the truck back on its wheels (we had to cancel the gig) all my drum stuff again checked-out A-OK.

• A (third set) of roadies unknowingly leaving the equipment truck's roll-up rear cargo door open after packing up. While driving a couple of hundred miles to our next gig a road case containing a set of P.A. amplifiers with my drumset's hardware case on top of it rolled out of the truck into a ditch on a rural road. The next day a farmer found the two missing cases at the edge of his field, and because we put business cards inside every case, he was able to contact us. After the roadies retrieved the lost items, I found nothing missing and everything (including BD pedals and hi-hat) in good working order. The P.A. amps also suffered no damage. 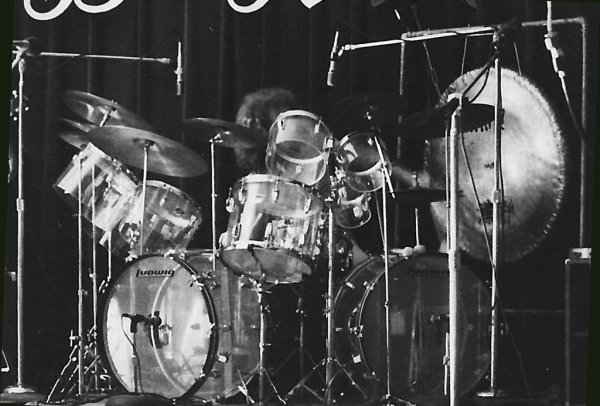 Wow! That kit had a charmed life! Vistalites more prone to cracking than wooden shells too I would imagine. Glad to hear they lived to play another day!
You must log in or register to reply here.

Wednesday at 6:13 AM
Tornado

Live From My Drum Room With Chad Cromwell!

Drumming is a dangerous sport!
2