Skins ‘n Tins — which many people assumed was a massage parlor serving a low-bodyfat clientele — is closing this week.

For 30 years, S ‘n T has provided drums and drum accessories to all five drummers in the Greater Champaign, IL, area. The five skin-beaters — who local media insist on calling “ percussionists” — include that one outre gear fetishist who recently posted 26 pictures in the “Show Your Snare Collection” thread elsewhere in this forum. I love the photo of his hot sister lovingly hugging a Black Beauty, but you know that guy hasn’t played out since back when thought Peter Criss was good.

Here’s how The News-Gazette broke the sad news:

Terry and Liz Hawkins started their downtown shop for drummers more than three decades ago, and they’ve decided it’s time to retire.

Terry Hawkins, a percussionist since childhood, got his own first drum set in seventh grade, he said.


He opened this shop with his wife in 1989, and it’s been a source for percussion instruments, supplies, music books and private lessons.

Many have returned and visited the shop over the years, he said.

“It’s a great feeling knowing they came here with a dream to play percussion, and they stuck with it,” he said.

Both percussion instructors at the shop will be teaching elsewhere in the area, he said.

The store phone number will remain active for a time after it closes for customers who need to reach him, Hawkins said.

He and his wife will be staying in Champaign, and he’ll continue playing with the local area band King T’z.

Retirement will give him and his wife a chance to do what they want, when they want, Hawkins said.

“After being here every day for 30 years, you want to spend the rest of your life on your own time schedule,” he said. 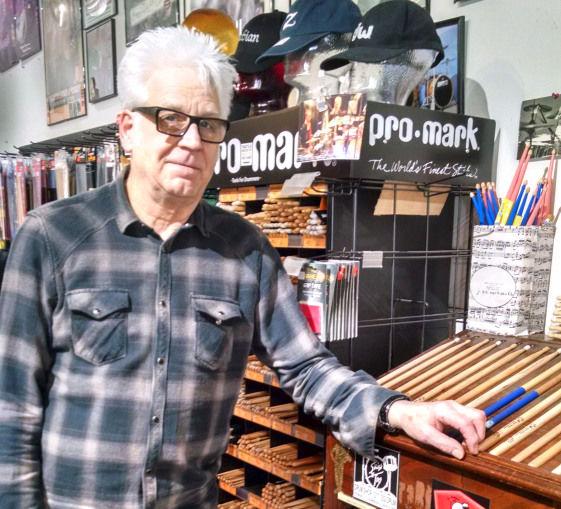 It's Your Business | Skins 'n Tins owners putting down their drumsticks

The drum shop that opened in 1989 at 29 Main St., C, will close Jan. 31, as owners Terry and Liz Hawkins wish to retire. A retirement sale is already

I guess it's your turn now. Pick up that torch!

Only made it there a couple of times. Champaigne is further than Chicago so I usually head east to the bigger city for drumming supplies. But I recall it being a great store. It probably would have been well worth the trip if I had other reasons to venture into that part of the state. Sorry to hear it's closing.

I stopped there a number of times over the years going to and from the Chicago show. Great store, really nice owners, sorry to hear this.
L

I think Terry is the only retailer to have a booth at every single Chicago Drum Show....
Last edited: Jan 30, 2020

"For 30 years, S ‘n T has provided drums and drum accessories to all five drummers in the Greater Champaign, IL, area"

OK, that one made me laugh.

I hate to see any retailer close, but at least it sounds like this is based on their plans and not due to slow business. I hope they have a wonderful retirement!

Ten years ago, two weeks after retiring, my wife and I drove from Washington DC to Champaign Illinois to participate in "Big Beat".

That is when we met Terry and his wife Liz. Since then I have stopped to see them any time that I traveled to Chicago or anywhere else that allowed me to make a stop at Skins N' Tins along the way.

I've bought a good bit of gear from them over the years, last May I bought a set of Humes & Berg Enduro cases from them. The shop always carried great gear and had great service because Terry & Liz cared. I'm going to miss my visits to their shop, but I'm thankful that I met them and call them my friends.

I'm sad for the loss of a great shop, but happy for them at the same time. Congratulations to them both on their retirement!

I'm fairly local to Skins N Tins and have been a customer since 1990. Probably bought 10 kits there and a handful of cymbals. I took lessons for a bit and hung out there quite a lot during one season of my life (I lived in Champaign for 3 years). They hosted some awesome clinics over the years and were just great to the local scene. They will be missed.
You must log in or register to reply here.
Share:
Facebook Twitter Reddit Pinterest Tumblr WhatsApp Email Link