Youtube is awash with Genesis 2021 (first shows) right now. Nic and the guys sound great btw (I'm not a Genesis fan).
I guess one plus of Youtube is that I can see what is going on with that tour (and others) without paying $300, or whatever it is.
Pat Metheny once said:

I don't really want to know or hear about people actually recording the gigs. It's just that if i actually SEE tape recorders in the audience, or know that they are out there, I start to go into "recording mode" in the sense that I start to edit what I'm gonna play because i know someone is gonna hear it more than once. it literally, and dramatically, changes the way I play if I know there is a tape going.
Click to expand...

Back in the day maybe one or two would tape a show and it wasn't sanctioned so it was done secretly. Nowadays you are looking at a wall of cellphones when you play live.
Back in the day a major tour might start with a warm up show in a small club. Then the first leg might cover Eastern Europe, Scandinavia. The tour wouldn't start in London, New York or LA.
No disrespect to the people of Eastern Europe and Scandinavia. You never want to have a bad show, or even an average show. I always played 110%, never settling for 90%, just out of professional pride and respect to my band mates.
It's kind of a drag that ANY show, wherever it is, can be filmed and uploaded for worldwide consumption as a 'definitive' show.
Back in the day you looked out in the crowd and saw fans engaged in the music, watching us, reacting to us. These days you look out and a lot of people are engaged in their iPhone, looking at the screen, adjusting the focus, checking the microphone is picking up etc.
Something is lost.

I can’t really quantify this, but to me such practice feels…narcissistic and a type of virtual signaling.

I generally skip watching any YouTube video that is posted from a recording taken from someone’s phone.
M

I agree as well.

Ever since cell phones have been around, I've been baffled to see people looking at their phones and not paying attention to the concert or whatever event it is. It's like they're almost not even present...

I wonder if there's any measurable negative impact of a show filmed at the beginning of a tour posted on youtube to later dates or even on another leg of the tour? Some awful phone video gets posted and then folks decide they are going to skip going to the concert. Meanwhile, the recording isn't even representative. Or maybe some big production where the surprise has been taken away...

My brother went to see King Crimson in Stockholm a couple of years ago. There were huge signs on stage before the show stating recording of any kind was not allowed and people would be shown out if recording. There were 5-6 people, staff, roaming around the hall observing the (sitting) audience and a few were indeed shown out.

Personally, I hate when I notice people with their phones in the air. I really want kick their butt. Disrespect.

Although I enjoy having access to these live concert videos, especially during the pandemic, I would never spend 2+ hours as a concert attendee video recording the entire event on my phone or other device. When I record something on my phone, my attention is focused on getting everything on the screen and keeping my hand still. I can't imagine fully enjoying a show with my attention diverted to make a decent recording. I never gave it much consideration how you as musician view all of this from on stage. Seeing a sea of phones I'm sure takes some getting used to, especially if you toured extensively prior to the cell phone era or during the time of flip phones.

Almost Every fan-filmed show or song I’ve ever heard sounded like pure garbage — and I’m confident most of the YouTube audience understands that phone’s aren’t good at capturing live sound — especially at metal shows.

It’s also ridiculous to say sitting on your couch is anything like being at a show where you can feel the bass drum through the floor and in your chest.
Last edited: Sep 26, 2021 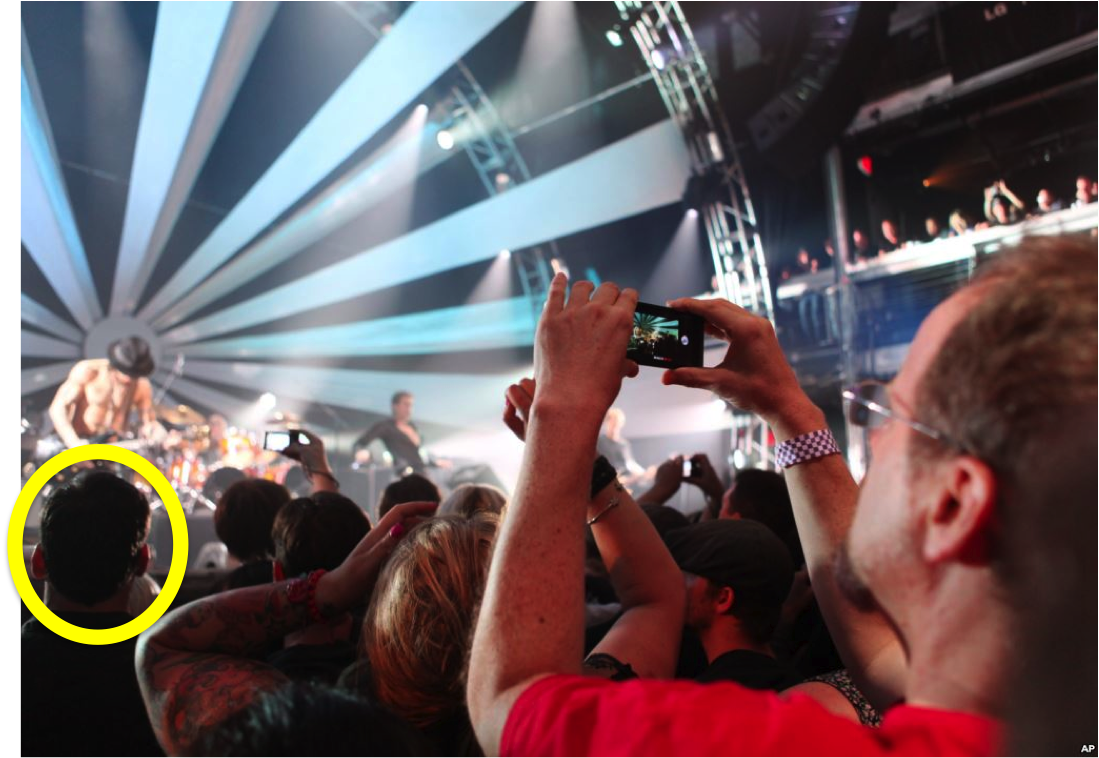 Man Forced To Watch Concert With His Own Eyes

News you can believe in

Agreed. A local player post vids of everything they gig and it’s just too much. Very good player, but do I really care? Afraid not. I’m sure someone is excited to watch them. My creed is leave the public wanting for more. Now, when someone posts a gig I’m playing, I have no control over that….
C

On a much much smaller scale, my folks live more than an hour away and don’t often get to see my kids gig with their sibling band.

My folks ask me to send them videos of the shows from my phone. I’ll usually do snippets here and there (and then post the snippets here as well), but I want to watch them in the moment and take it all in, trying their best to interact with crowds, chuckling to myself given their inherent shyness.

I don’t fault folks for doing it. But it’s just not for me. I’d rather remember the experience than a recording of something I didn’t get the full opportunity to experience.

No debate here. Totally agree. I personally hate cell phones. They can serve a great purpose in emergencies, and GPS is very useful with my sense of direction. Only a select few people have my cell phone number. All great technology ends up being mostly abused by the masses.

If you've ever been to a dead show you've seen images like this. The Tapers. The band embraced them, gave them a section all to themselves. Some of the best recordings I've ever heard, a lot of them right off the board. Too bad a bout cell phone mania but I will say its nice to see quality clips posted on occasion, There's actually some good recording phones and good operators. Its here to stay and tech will only get better and better. Smile, your on camera wherever yo go! 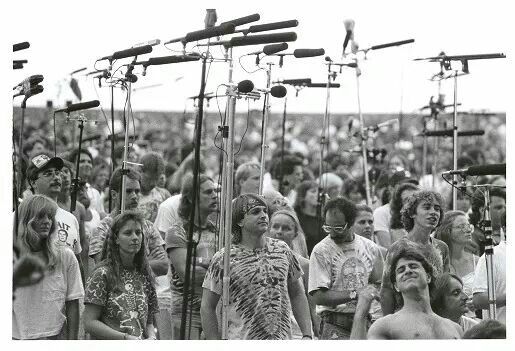 Yeah, the worst thing for me is traveling for hours to get to (your) city. Spending two hours sound checking. Then playing the show to hundreds of iPhones.
If you are international it is funny, some countries you see one or two cell phones come out for one or two songs. Other countries hundreds of cell phones are in front of faces for most or all of the show.

Took my son to see Dream Theatre , I was so glad to see them ban cell phone use in the concert ……..

Cpb282 said:
On a much much smaller scale, my folks live more than an hour away and don’t often get to see my kids gig with their sibling band.

My folks ask me to send them videos of the shows from my phone. I’ll usually do snippets here and there (and then post the snippets here as well), but I want to watch them in the moment and take it all in, trying their best to interact with crowds, chuckling to myself given their inherent shyness.

I don’t fault folks for doing it. But it’s just not for me. I’d rather remember the experience than a recording of something I didn’t get the full opportunity to experience.
Click to expand...

This is a very different situation IMO than the original question. I have recorded every song of every school concert and parade my son played in, from 4th grade to 12th grade. These have been wonderful to share with family who do not live in town, and they're wonderful to look back on from time to time. I'm glad I went to the effort to record these even though it may have diverted my attention somewhat during the actual performance.

Mcdonap said:
I agree as well.

Ever since cell phones have been around, I've been baffled to see people looking at their phones and not paying attention to the concert or whatever event it is. It's like they're almost not even present...
Click to expand...

Yep. Documenting family members or your own band is different.
Paying good money to see an artist who might not tour again for years, and viewing the whole show through a cellphone screen - is something else.

Years ago a friend of mine seen Prince (he was a dentist and paid for front row). He said the audience was allowed to record the first song of the set, after which they had to put the phones away or risk being escorted out.
He said the audience seemed to abide by this and he praised the approach.

I’ve seen several YouTube videos of artists admonishing the crowd for talking at full volume during a set and it’s beyond disrespectful IMO.
Last edited by a moderator: Sep 28, 2021

I’ve had to ask people to please be quiet at shows .
One time I drove 350 miles for a show and told a guy I drove 350 to hear the band not him ….
My sister and her husband said “ we need to bring you to every concert “

And that's just getting started. Add the shaky, grainy video, shot vertically of course, and I can't hit the back button fast enough.
You must log in or register to reply here.