The kit that got away

The real heartbreaker for me is the 1990 pre-YESS Yamaha Maple Customs in turqoiuse finish with gold lugs (12x10, 13x11 ,16x16 and 22x16) that was my first "Real" drum kit. My late Father bought the kit brand new for $1492 Canadian (with Nomad cases) and I paid back every penny doing chores and odd jobs - took me 2 years. Dad logged every payment on the back of the receipt, which ended up completely covered and spread to the front of the receipt. I sold this kit because the power tom depth was too much for me and I didn't know having the drums cut down was an option at the time.

I'll never forgive myself when I think of the hurt in my Dad's eyes when he found out I sold it. What a dope I was/am.
Last edited: Jul 8, 2020

Any time a wood hooped Ray era Ayotte comes up on this site!
C

NobleCooleyNut said:
We all have tales of fantastic drum sets that you just missed out on . Come on folks fess up and tell us your regretful tale.

The tale for me involves a Noble and Cooley Star series kit . The toms on the kit were all steambent maple and short stack style toms . The bass drums were regular multiply maple shells . This particular kit was for sale at Songbird Music in Toronto . It was up for sale for $1650 Canadian . Unfortunately for me at the time I was married to an extremely frugal Woman that threw nickels around like manhole covers and had a death grip on our bank accounts . It took me a couple days to convince her to let me buy the kit and when I got back to Songbird the kit was gone . It has bothered me all these years as these kits are very rare and collectible .
Click to expand...

Back in the late 80s (or very early 90s), a local shop had a Noble & Cooley Star set on the floor that - to this day - I would swear was the best sounding wood kit I've ever heard. I hemmed and hawed about it for a while (I didn't really need it and money was tight). When I finally decided to pull the trigger, they had just sold it to some guy in Italy. According to Chris Whitten, Paul McCartney said that Whitten's Star kit was one of the best sounded drum sets McCartney had ever heard - and I don't doubt it. 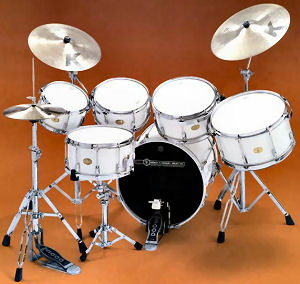 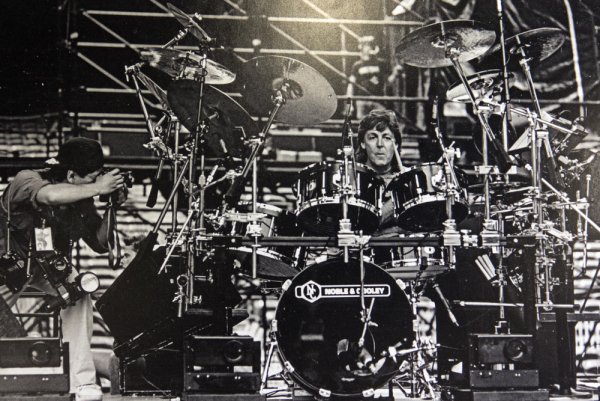 I sold a cloud badge 7x14 Radio King when I was living in Nashville. 16 lug, faded white marine pearl, all original hardware including snares with metal tabs, a real specimen. Still kick myself for letting that thing go...

Many years ago I was at a Music go Round to sell some things because I had just lost my job. To make matters worse they had just gotten in a Ludwig downbeat in galaxy sparkle WITH the matching downbeat snare. All with original “play-on plastic” heads. $750.00! And there I was unemployed, so all I could do was walk away. That still kills me to this day, but someone sure got a deal!

In 2010 my wife and I were in NYC to see Eric Clapton and Jeff Beck at Madison Square Garden. We met a drummer friend for lunch, and the three of us went to Steve Maxwell's after we had a bite at the Carnegie Deli.

We each played a walnut Craviotto solid shell kit with wood hoops. WOW is the only word to describe it. I played it and Gene listened, then Gene played and I listened. It was a lot of money. However, it costs a good bit more ten years later. And, when I look at what I've spent on other kits over the years it does not seem unreasonable.

Gene and I are still good friends, and we still talk about that kit.

I still may buy a walnut Craviotto one of these days...

My pristine all original spotless Premier 2000 snare drum, I am not sure if I want it back anymore after what happened.

Premier Genistas back when they were new and not too long ago used. 1990’s. Probably my favorite sounding drums ever.

Mike St.Clair said:
Premier Genistas back when they were new and not too long ago used. 1990’s. Probably my favorite sounding drums ever.
Click to expand...

I honestly can't recall ever playing one of those. I have always wanted one. Ended up with a Maple Custom and didn't care for it ... I know, I know. One day, I may take the plunge and snag one of these Genista kits. LOVE the lugs!

Circa 1977, my father and I went to look at a set of 6o's Ludwig's 20/12/14 ; the owner told me that they were similar to Ringo's but I knew very little and was skeptical about it being Ringo's drum wrap...yes,folks, it turned out that they were Oyster Black Pearls in nice shape and maybe 12 years old or so. I think he wanted $250 then which seemed a lot to a 14 year old kid then..... We live and learn!
Fast forward to today....I have 2 sets in that colour; a Super Classic and a partial Downbeat that I am working on assembling. So, what goes around comes around!