The too many cymbals dilemma

I have cymbal banks (same idea as shell banks) in 50’s A’s and 602/SC/Seven-Sound, and could cover anything from that Mahavishnu tribute to the Cannibal Corpse sub-in to the Western swing band that I’m sure are going to call any day now. Plus I grabbed a Giant Beat set out of curiosity to go with my Bonham kit for playing all those Zeppelin songs I don’t like very much, and a 70’s 404 set for those scuzzy biker-bar gigs I don’t get.

As a dining-room-drummer, part of me thinks I should feel bad for holding so much good gear captive, but then again that guy isn’t very loud and doesn’t have my eBay or PayPal passwords. I like being able to have a whole new kit every day if I want to, even if it’s a stupid idea like 16” hats/16” crash/16”ride and 16”rack/16” floor/16” bass, which I really should do one of these days.

A master artist can do amazing work with only 3 colors. If I’m going to be a hack, I like being a hack with every color of the rainbow at my disposal.

There is no such thing as too many cymbals, or too many of anything. If someone feels guilty about what they want or own, that is a separate matter altogether.

That's like people talking about "greed," as though there is a standard definition of it that works for everyone, in every situation of life, anywhere on Earth.

I read on another forum, the drummer with Weird Al, Jon Schwartz, has around or over 1,000 cymbals. That's his gig, matching sounds to recordings.

Saying "All you need" to someone is impossibly errant when it comes to musical instruments and what they shall be used for by any person using them, and what each person hears inside that they want to project in their music using those instruments and what inspires them to play.

Look at Bandit. If I could have a place like that, and drums to just walk up to and play for whatever variation of heart and soul is in me, I'd own such a situation in a heartbeat. I'd gladly go easy on the groceries and electric bill if I had to.

Jay Leno might look at me and ask why I need so many cymbals but, I doubt it.

I'm not saying "stuff" brings peace and happiness. No amount of stuff can truly do that but, I wish people would allow others their space and let them do what works for them without guilt trips and projecting their own feelings onto people of what is too much.
A

dustjacket said:
AtlantaDrumGuy, just curious: How many kits do you have?
Click to expand...

Too many...mainly vintage. Mostly stuff I got before I was married in 2016.

2 modern kits...DW and Yamaha. 7 vintage kits (Camco, Gretsch, Ludwig, Rogers), and another set of Ludwig orphans that hopefully will get wrapped...the one with the 24x14.

I was able find larger metal racks to put them on neatly. They’ve all come out to play at one time or another. Except for the Camcos which I haven’t had as long.
Last edited: Mar 8, 2020

REF said:
There is no such thing as too many cymbals,
Click to expand...

Says the guy with too many cymbals

Difference between need and want.

Regardless of my most recent sin (set of 2002s) I am getting there.

I should have given up cymbals for lent.

Me - "Father forgive me for what I hath done"

Now and then, I want a new cymbal, over time I have amassed all kinds of cymbals including smaller crashes, bells, chinas - I have all that in storage, but I rarely use it. The last time I used more than three top cymbals at a gig is over a decade ago now. I keep thinking it would be nice to have a whole array of sounds ready on the set, nice to have choices, but these days, I choose at home, not on the gig.
It's a similarly "bread and butter" concept to what I've arrived at with my playing (straight-ahead jazz mostly): doesn't need to have all kinds of bells and whistles.

I think everyone can be fine with 1 set of drums and 1 snare and 1 set of cymbals and play pretty much everything with those, especially if you only play live and not much recording.
This is my goal:
2 kits (a vintage kit and a modern kit)
2 set of cymbals (vintage and modern)
and 2 snares (vintage and modern).
I am pretty sure I will be good with only 1 set of each but I love to look at and play vintage stuff, so I am going with 2 sets of each.

EvEnStEvEn said:
Says the guy with too many cymbals

Ha! Says the guy with not enough snare drums!!!

Lately, my cymbalholism is manifesting in tracking down discontinued Zildjians. If I can go to a shop and buy/order it, I don’t want it. If I have to scour the internet for it, then I have to have it. The Pre-Aged Dry Light ride under or around $200 was a recent obsession. Thrill of the chase, I guess.
Last edited: Mar 9, 2020

I like collecting "something cheap". I've managed to fetch some pretty killer deals on a Zildjian A crash, a Sabian HHX splash, and a Paiste 2002 ride (taking into account that there're practically less Paiste dealers than Bosphorus ones in my country). And a per se nice and inexpensive Chang china. As of now I'm ordering an Amati Kraslice cymbal from eBay. I've no previous experience with that brand, except I know that they probably made some nice violins and Sonor-style drums. I figured it looks better constructed than some non-hammered MIJ cymbals of that era, so it must sound better than "usable for jazz"? And if it doesn't work I still probably can make a stack cymbal out of it.

I have 2-3 crashes & 1-2 rides of Paiste’s 2002, Modern Essential, Signature, Dark Energy, and Traditional series, a few sets of hats, splash, and 2 Chinas all of various Paiste series and yet I need more. Like many of you on these forums, I have issues.

THAT is my cymbal "fun" money
Click to expand...

AtlantaDrumGuy said:
Too many...mainly vintage. Mostly stuff I got before I was married in 2016.

2 modern kits...DW and Yamaha. 7 vintage kits (Camco, Gretsch, Ludwig, Rogers), and another set of Ludwig orphans that hopefully will get wrapped...the one with the 24x14.

I was able find larger metal racks to put them on neatly. They’ve all come out to play at one time or another. Except for the Camcos which I haven’t had as long.
Click to expand...

I have 5 kits and I’m in the middle of making shelves for all of them. It’s driving me crazy with all of that gear lying all over the place. 
I have 5 kits and I’m in the middle of making shelves for all of them. It’s driving me crazy with all of that gear lying all over the place.
Click to expand...

No doubt, but it would definitely be cheap regardless where you were if it was $25/hour.
A


I have 5 kits and I’m in the middle of making shelves for all of them. It’s driving me crazy with all of that gear lying all over the place.
Click to expand...

Metal racks are the way to go. They’re all nearly stored and easily accessed. If anything, it’s cymbals that are all over the place.

AtlantaDrumGuy said:
it’s cymbals that are all over the place.
Click to expand...

you missed (but need...) the wooden A- Frame style Racks we all bought from Front Range Bronze a dozen years back... Unused cymbals sit on the wooden rack ( A- frame shaped; 14s on top larger on bottom rack) Takes/ up a 2'x 3' space at most about 4' tall..

sort of like this; but half of that and half as tall.. 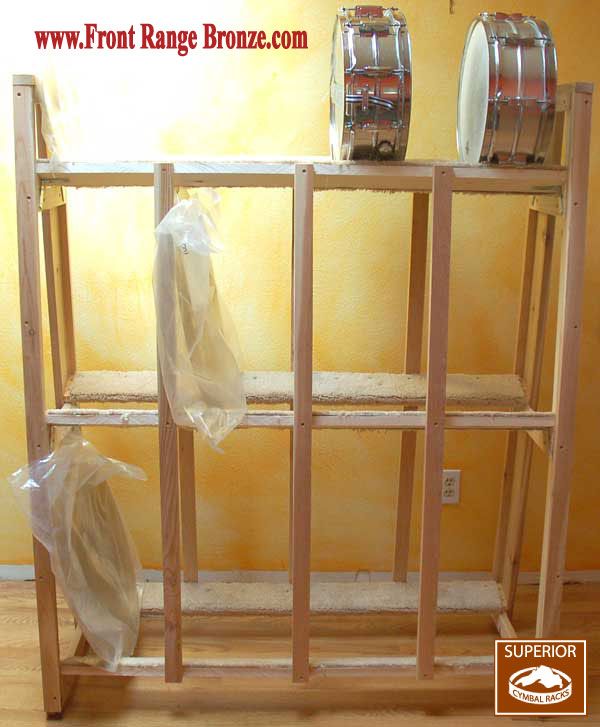 front Range had beautiful ones; better looking than this but similar size

$5 Cymbal and Snare Rack: Every drummer knows that if you leave cymbals and drums in a room by themselves, they will eventually 'spontaneously reproduce' and make MORE cymbals and drums, which make more... You get the picture. This is the story I've stuck to for years, and...

cymbal rack storage - Google Search
You must log in or register to reply here.